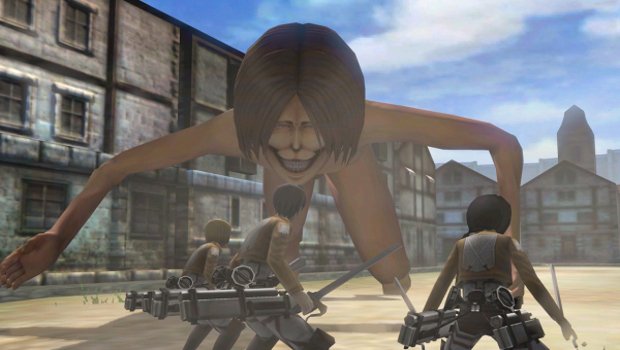 Have you seen Attack on Titan? It’s a “post-apocalyptic-steampunk-giant-naked-cannibals-with-perfect-facial-hair-action-horror-cute-teenagers-save-the-future” cartoon, and people really like it. There’s already a fan game that’s got a huge fan base, despite having some jank visuals.

It will be interesting to see if they’ll be as forgiving of this 3DS game. It’s sure to be the first of many games based around this increasingly popular series, so that honeymoon excitement may help to gloss over any perceived blemishes. These screenshots have been up-ressed to more accurately convey how the game will look in its native resolution, though I’m sure things will be a little different when you see it on an actual 3DS. Much of the series is about teenagers slinging themselves through the air and severing the spines of the enormous, zombie-like Titans. That may look pretty cool in 3D.

Here’s to hoping the game see’s release outside of Japan so we can all see for ourselves.

Attack on Titan: The Last Wings of Mankind screenshots [Gematsu]