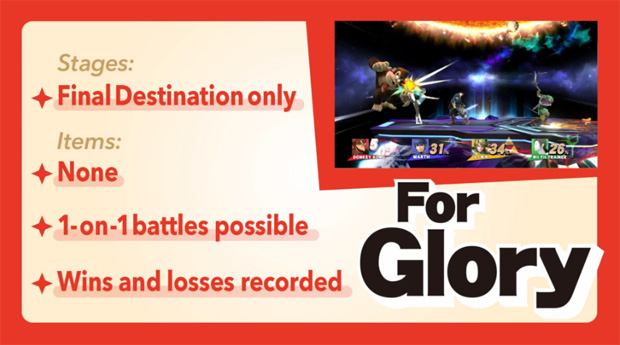 The online modes for Smash Bros. Wii U and 3DS have been revealed, and they sound like a massive step-up from Brawl. Nintendo notes that you can play online with friends and with random people — but you want a “fast access point.” They recommend a wired Wii U LAN adapter if you want to play online.

Here’s the good stuff — players will be able to play matches “For Fun” or “For Glory” — this is basically unranked and ranked, respectively — even though Nintendo notes that “ranked” won’t be as detailed as other fighters. “For Fun” cuts out the Final Destination stage, has items, and queues up a random stage. “For Glory” is only Final Destination, and cuts out all items.

They also have a reporting system that is supposed to cut down on trolling, and bans may be given out.