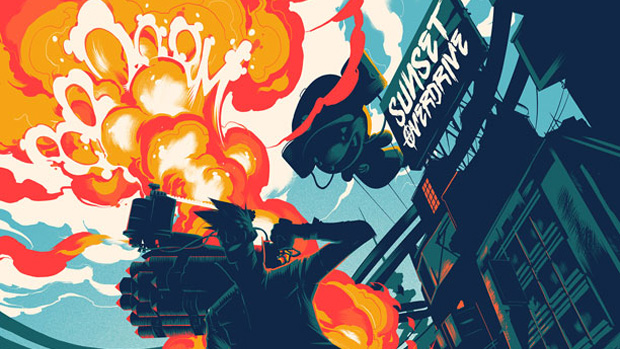 Mondo has come out with some of the coolest movie posters in recent times. I’ve yet to get one, and not for lack of trying. Now, it seems videogames are on the table for the company — I sense more pain from missed limited-edition prints in my future. As revealed by Entertainment Weekly, Insomniac has tapped Mondo to create a poster for its next game, Sunset Overdrive.

“We’d noticed the game from trailers and early announcements and the art really caught our eye,” Mondo CEO Justin Ishmael told the outlet. “Eventually Microsoft showed us assets and other behind-the-scenes materials and it all looked so nuts and seemed really cool… so we decided to give it a shot!”

Artist Matt Taylor said he “wanted the poster to stand alone as its own thing, rather than just be a continuation of the look of the promotional and box art that was already out there. The box art was a crazy, maximalist, throw-everything-in-and-the-kitchen-sink-too piece of illustration, and there was no way I could compete with that. So I decided to go aggressively bold, blocky, and colorful and still try and capture the tone of the game, hence the onomatopoeic BOOM in the explosion.”

I do genuinely hope this poster is a sign of things to come. Digging how this one turned out.