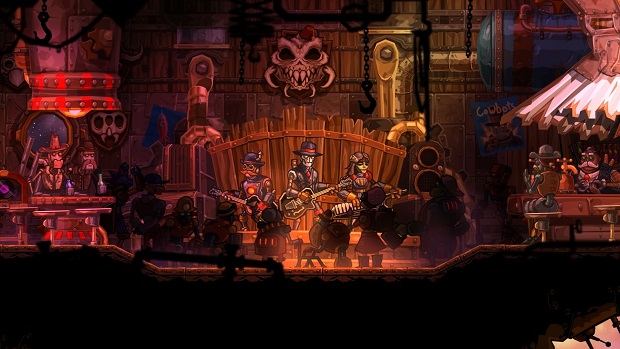 Also, you’re totally not ready for minute 3:03 in this video…

One of my biggest regrets from PAX East this year was missing the chance to get some hands-on time with Image & Form Games’ new turn-based space adventure title SteamWorld Heist. Even though the appointment unfortunately fell through, I did manage to at least get a look at the title in action on my first day on the show floor and came away very impressed with what I saw.

As Jordan reported, SteamWorld Heist takes place in the same universe as its platforming predecessor, SteamWorld Dig, but is further down the timeline, where a cataclysmic event has shattered the robot’s planet, forcing the population into steam-driven spaceships to survive.

In this latest video, the studio focuses heavily on the turn-based combat we’ll be seeing in the game. Of particular note, check out what seems to be a “free aim” aspect where the robots can select different points on a target to aim for, such as one of the enemy’s hats, or to select another target altogether without having to reenter a turn-based phase.

There’s still no official word on a release date or platforms at this point, but as we learn more, we’ll be sure to keep you posted.