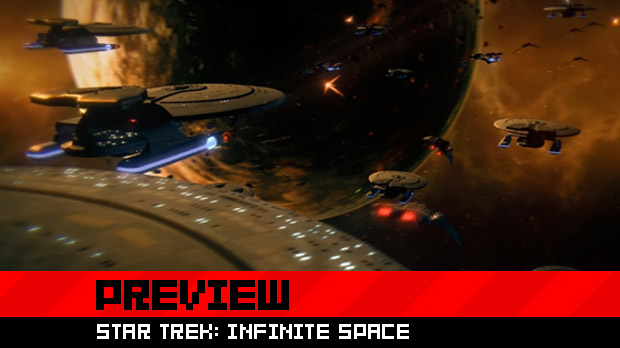 Let’s face it, Star Trek games have been a challenge for most developers. With many titles in the past that have tried endlessly to capture the universe in a way that can please the fans of the series, the team at Keen Games is attempting to present a new take on the series and the genre of space simulation and actionish games.

Since this title is stepping into the free-to-play realm, they are making it more accessible to a younger and broad audience.

Hearing about a free-to-play Star Trek game might just catch some of you off guard. We also know that Star Trek fans also can be some of the most hardcore fans in the world. That being said, those expectations are high and we always need a good Star Trek title.

This is set up in the timeline of the Deep Space Nine world, where your job is to defend the Alpha Quadrant against all of the unknown denizens that tend to live in the universe. The story is written by Lee Sheldon who has written a few of the Next Generation episodes; Michael and Denise Okuda (authors of The Star Trek Encyclopedia) also contributed to the detail of the game’s story arc.

In terms of graphics, this game is incorporating a full 3D graphics engine called the Unity engine in the browser. You can see the detail in everything that you encounter in space from the architecture of the Ferengi hub to the nebula that you might have to mine ore out of.

There are two factions to choose from: Federation and Klingon. When choosing which one, even though you might think that one is a good guy and one is not, do not be confused. This game is meant to be played the way you want to. If you want to pretend like you are a drunken Captain Kirk and have not a care for anyone else just to get your job done, you can do that. The option to actually be a kindhearted Klingon is also available should you choose to play that way.

Main story missions will take you through the campaign so that you can really immerse yourself in the surroundings of the world of Deep Space Nine. These missions are unique to each faction and can have multiple outcomes.

Battleground scenarios are there for you to try out different roles in groups or to fine tune your play-style. You could keep trying different tactics to defeat that annoying Borg cube that has been giving you problems.

Exploration missions, which are a crucial part of the Star Trek world, are also there for you to finally get out and see what lies beyond the frontier.

The Central Hub in this game will be your launching point for you to meet up with friends and for you to build a party that will be able to go out and rule the galaxy. In the hub, you can show off your illustrious gear that you paid cash for or you can just go emote crazy and keep tapping your communicator to see who gets the most annoyed first. Yes, there is also and emote for you to “engage” as well.

Since you are the captain of the ship, you also have to successfully manage your crew. You will have to work with your Science officer, Security officer, Medical team, and your engineer. As you play this game, you will utilize them to successfully manage your missions and they’ll help you succeed. As you level up, you can use some of your skill points to help build your crew to make challenges with them easier to win.

Infinite Space plays like a top-down action game. You have your skill bar at the bottom of the screen so your photon torpedoes are at the ready. From the overhead perspective, you’ll control your ship and easily navigate it through levels. It works very similar to an RTS style of control for your ship where you can either drag it with a mouse, point and click, or use the WASD keys. For this game still being in development, the visuals are shaping up to be great.

In this demo, a Intrepid Class ship was used to complete the mission. As for the HUD, they really nailed it with the interface of how it would look if we were actually using a control panel. We took the starship around an asteroid field and into enemy territory, where we were promptly ambushed. After spamming photon torpedoes and phasers, we managed to get out safely and continue on to our destination.

In combat, the key is to weaken enemy shields; sending a disruptor their way to slow them down will be a great help while you take the time to flank them, for instance.

Morality also plays a key role in this game where you will be faced with decisions that can influence your future. In one example, you are given a choice to blow up a ship with your away team on it or wait for them to try to capture the rogue who might escape without your interference.

Star Trek: Infinite Space also promises over 180 hours of playtime. They really want to give players the tools to play how they want. So if you want to gang up on that pesky Borg Cube with three Defiant class ships, go right ahead. There will be twelve ships for each side of the game, but within that, there will be many variations of the ships to work with.

With this title stepping into the free-to-play realm, it is surprising to see all the work that they put into the detail of the game and the detail of the universe to get it just right for fans. Infinite Space will be out later this third quarter and it looks like it just might be the chance for us to boldly go there…for free.