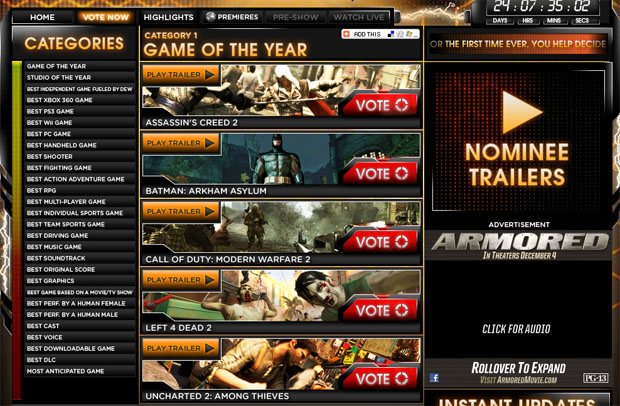 The VGAs may be looked at with cynicism and contempt by a great many among the gamer community, but there’s no denying that it’s about as mainstream an award show as we’re going to get. With that in mind, the nominations are in, and we now get to see who’s vying for the biggest accolades that Spike TV has to offer.

It’s interesting to note that the 360 nominees include multiplatform games, one of which (Arkham) was better on the PS3. 2009 really was the killer year for PS3 exclusives.

On a personal note, I’m asking everyone to vote for Demon’s Souls as RPG of the year. The very fact it’s a nominee is amazing, but it would be incredible to see the game win. It truly, truly deserves it, even though I know in my hear that Borderlands or Dragon Age will probably beat it.

Anyway, go check out the nominations, vote, and let us know who you’re rooting for.