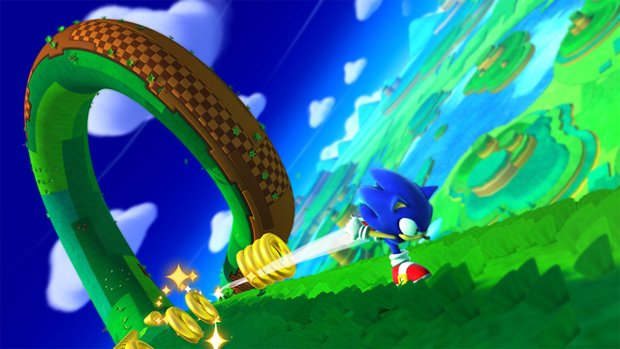 Speed shifting and Parkour introduced to the Blue Blur’s repertoire

I got ridiculously excited when I saw the trailer for Sonic Lost World, but if the “Sonic Cycle” has taught us anything, it’s that we should keep our expectations in check lest we disappoint ourselves for the umpteenth time. However, if the gameplay details described by SEGA and IGN’s exclusive preview are any indication, many of Sonic’s past shortcomings have been rectified.

First, let’s get the threadbare story out of the way. Those new characters? They are known as the Deadly Six. Dr. Eggman tried to get them to do his bidding, but like clockwork, they were having none of that. Thus Eggman teams up with Sonic to combat their mutual threat. Don’t let this temporary partnership trick you into thinking you’ll be getting play time as the fat man himself; as in the past few Sonic titles, the hedgehog will be the only playable character. Others like Tails and Knuckles will make appearances, but they will remain on the sidelines.

Sonic’s moves and abilities have been constantly refined for his 3D outings, but Lost World introduces some of the most significant tweaks to the series thus far. These changes come in the form of new speed shifting and parkour systems.

In previous games, tilting the control stick a tiny bit would send Sonic on a light trot, while tilting the stick all the way would launch him at top speed. This made precision platforming a lot more finicky than it needed to be. In Lost World, Sonic will walk by default with the tilt of the stick. Only once you hold down one of the GamePad triggers will Sonic launch into a sprint. Then if you hold down the second trigger, Sonic will curl into a ball for even greater speed.

Another issue plaguing Sonic’s 3D escapades has been the sudden break in momentum should he run into a wall. In Lost World, as long as the run trigger is depressed, Sonic will execute a wall run or some other Parkour action should he slam into an obstacle. This will ensure that next to nothing will impede your forward progress.

Returning from Sonic Colors are the Wisp power-ups, which can be manipulated via the GamePad’s touchscreen. If you wish, you can play with the Wii Remote-Nunchuk combo and pass the GamePad off to a second player, who will be able to offer touchscreen support à la New Super Mario Bros. U or Rayman Legends.

SEGA also shared screens of the 3DS version, which will be the first handheld Sonic game to offer full 3D exploration just like its console brethren. It doesn’t sound like it’ll be a 1:1 port of Lost World Wii U, but it ought to be more faithful than portable companions in the past.

I really hope Sonic Lost World is on display at E3. I’m getting rather thirsty.