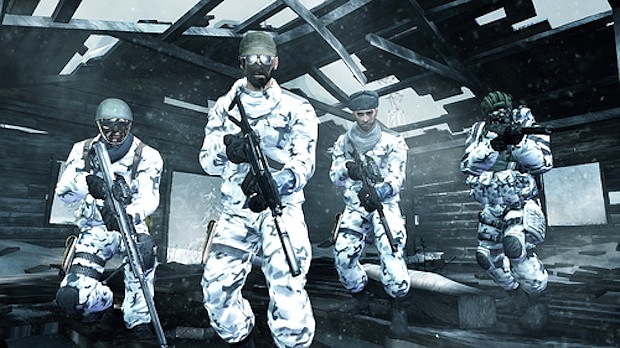 Slant Six and SCE have announced a new and snow-themed expansion called Cold Front for the FPS SOCOM: Confrontation. Set to hit at an unknown date and priced at $14.99, the cold DLC is packing a flurry of content including five new maps, three of which are re-tuned SOCOM golden oldies. Thermal goggles and white camo will be included in the DLC, as well as a different character progression system, a new mode dubbed “Arms Run,” and a new Special Forces regiment, the Russian Spetsnaz.

The new progression system is traditional — players pick a weapon, use it a lot, and then unlock new attachments for it that they can deploy in battle. What makes this a bit more interesting are the weapons themselves. Three news weapons are included in the expansion, along with 6 “enhanced” oldies that will fit into the aforementioned progression system.

There’s obviously a lot of new here, or at least an Eastern European landslide of tiny details (such as Arms Race being a missile launcher sabotage-style mode), so do hit up the official SOCOM Web site if this expansion pack tickles your fancy. And speaking of fancy tickling, while a date hasn’t been announced, the DLC will roll out at the price of $9.99 on the first day its purchasable — a special price for the fans of game whose said fancies are tickled.