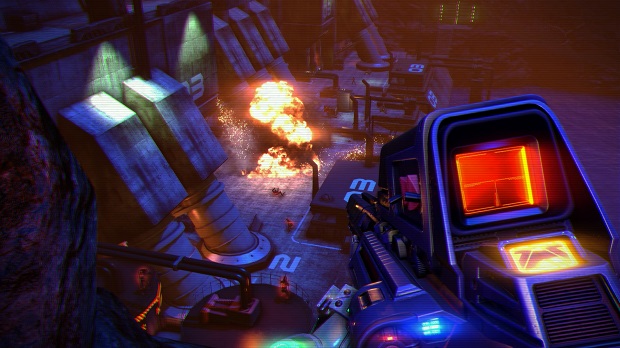 Far Cry 3’s Blood Dragon DLC is like the greatest straight-to-VHS movie that never was. So why did Ubisoft take such a big thematic leap from the Far Cry 3 template? Game Informer talked with creative director Dean Evans about how his love of ’80s action flicks and Ubisoft’s willingness to expriment allowed Blood Dragon to become a reality.

Evans mentions how Far Cry 3‘s director was open to all suggestions as to ideas for DLC and how recent films like Hobo With A Shotgun and Manborg had inspired the idea for an ’80s-influenced game. Evans even got in touch with Hobo‘s director Jason Eisener and his input helped shape the game, along with Power Glove who provided the soundtrack to Blood Dragon.

Of course, the big score was getting Michael Biehn to voice Rex Colt; Biehn had lent his voice to Aliens: Colonial Marines but was jaded on the process; “That wasn’t fun at all,” he said. “I just didn’t really have any fun. It seemed kind of passionless.” But Evans’ love for the time period and project won him over: “…it was his passion, man. You just can’t say no to him.”

You can see the short development cycle in Blood Dragon but it’s also apparent how much love has gone into the game. It was really encouraging to see Ubisoft take a big gamble on the concept and hopefully other publishers will encourage similar creativity for DLC.

The 80’s Strike Back: The Complete Story Behind Blood Dragon [Game Informer]