Tucked away in a corner below The Wind Waker HD and behind Pokemon X/Y at PAX is a small kiosk featuring Retro City Rampage and Shantae and the Pirate’s Curse, both on the 3DS. Stop by if you have the chance. The games are both fantastic, and on top of that, their developers should be standing by to chat you up. Make time for them if you can.

Pirate’s Curse may be one of the most attractive games at the show. WayForward has really gone all out this time, using the sprites from Shantae: Risky’s Revenge as a base, while adding additional colors and frames of animation. The 3DS screen makes for a larger playfield, lending to more intricate environmental puzzles, more enemies on screen, and more action in general. It’s easily their prettiest handheld title yet.

As those of you who’ve been following the series so far already know, Shantae has lost her former half-genie powers, and has been forced to team up with criminal pirate troublemaker Risky Boots in order to try to get them back. Risky ends up rubbing off on Shantae in more ways than one. Not only will Shantae learn pirate-styled attacks and abilities, but she’ll gradually begin to behave more like a pirate as well. 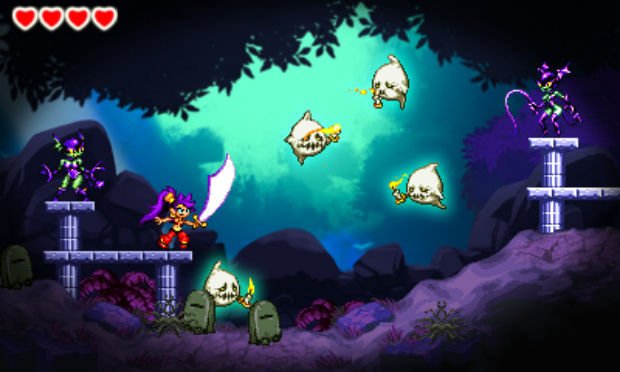 Shantae may be a pirate now, but she still has some of her old moves. She still attacks with a Belmont-inspired hair whip, and she still knows how to dance. She also has a new move that allows her to suck up items into a lamp, making it easier to collect loot and other enemy drops.

Pirate’s Curse will have 5 dungeons, the most in the series so far. Though the game will be quite large, WayForward is looking to shorten the length of the bits in-between dungeons, packing in more ideas in a smaller space than the original GBC game. As exciting as that all is, I’m most interested in finding out why Rottytops made that heel turn in the last episode. Is she really a jerk now? WayForward says we may be surprised.

It will be interesting to see where WayForward takes their flagship character in what’s planned to be the final chapter of her first (and hopefully not last) trilogy of games. Shantae and the Pirate’s Curse is. The game is set to hit later this year. Check out Sup Holmes on September 8th with Matt Bozon, WayForward boss and Shantae’s creator for more sweet inside scoops.