Race with flair on March 12

One of the great things about Sega’s ongoing 3DS Classics series is that it allows retro games from the publisher’s past to find a new audience. And given its rich and diverse history of quirky and fan-favorite titles, there’s plenty to remaster for quite some time.

One of the upcoming remasters is Sega’s legendary racing title OutRun. Though it was already released overseas last year, western audiences are finally able to get their hands on the title on March 12 (that’s tomorrow!).

But before you do, why don’t you take a minute to learn just what went into this port. I managed to get some hands-on time with the remaster, along with a quick chat with Sega producer Yosuke Okunari, who had quite a lot to say about its transition to new hardware.

For those not quite familiar, OutRun is an arcade-style racing game that tasks players with racing their shiny Ferrari Testarossa across a stretch of land. At several points, you’ll be able to choose which path you’d like to take, which will take you to a brand new setting that you’d likely not see in previous playthroughs. This nonlinear gameplay was rather unconventional for a racing title, which made it quite popular with arcade goers who wished for repeat plays. Over the years, it’s developed quite a legacy for Sega, and it has even inspired musicians like Kavinsky for its portrayal of style in high-speed.

It was a rather seminal title for Sega, earning a lot praise and finding much success in the arcades. Developed by Yu Suzuki, the creator of Shenmue, Virtua Fighter, and After Burner, it focused on fast gameplay while giving players a soothing and equally pulsing soundtrack to listen to. It even got several followups over the years. But with this remaster of OutRun, the folks at Sega had to put in extra work to retain the the original’s style and feel without watering down the experience.

“OutRun and After Burner II are two games that were the most important games in Sega’s history through the 1980s. However, due to a number of reasons, there was a time when there were no opportunities to port these two titles to other platforms,” said producer Yosuke Okunari.

“The most important thing for these kinds of games, and this is apparent from a video of the game you may have seen, is not to take these important games and try to remake them completely from scratch, but rather to recreate the playstyle as faithful to the original as you possibly can. And because the game preserves the feeling of the era it was made in, that history and the memories of those times can be communicated to everyone.” 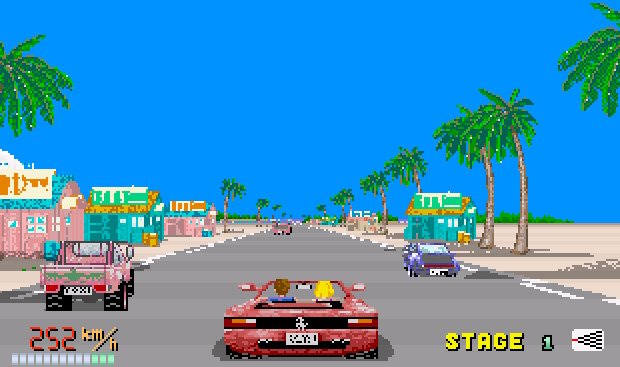 During my playthrough, I immediately noticed how much smoother it felt. I played a bit of game when I younger in the arcades, so seeing this in action on a handheld was kind of a trip. And with the 3D enabled, the game doesn’t lose performance one bit. It was impressive to see that a super fast racing game like OutRun would be able to make the transition so well. Honestly, it felt a bit hypnotic going over 200 km an hour. Once you’re in the zone, you’re kinda in a trance. Okunari-san explained that with the success of the previous titles on 3D Classics, they were able to tackle the necessary hurdles porting OutRun would take.

“The 3DS is a notable piece of hardware, but it’s not a console that’s particularly well suited for creating faithful ports,” he explained. “And so we were not able to include these two titles when we first began the development for the Sega 3D Classics. Only through the success of the first batch were we able to obtain the technical know-how and development budget to work on these two titles. It’s because of all the fans’ support.”

Often times, the 3DS tends to have some trouble with handling ports of classic or even recent titles. Which made porting the game, despite its age, somewhat of a challenge. One of the techniques that titles like After Burner and Space Harrier use is a way of presenting 2D sprites as pseudo-3D visuals, which is done with unique sprite-scaling designs. But in order to keep it consistent with other titles, the developers had to double the performance on OutRun, upgrading it from thirty frames per second to sixty.

“Tying to get squeeze out more performance that the original title supported was a very difficult undertaking,” said the producer. “Simply straight porting the game as is would prove to be a challenge in and of itself, but we had to optimize and improve the programming so it would run twice the speed as the original. Also, we added two new songs to the game, and made a point that they had to blend naturally and feel completely natural in the game, which was also a great challenge. Essentially using the same sound sources as the original, while ensuring that they would sound different and unique compared to the original three songs. New songs in the style and feel of the era when the game was originally released, back in the ’80s.”

It’s certainly eye-opening to see the amount of work that goes into remasters for classic titles. I supposed with the technology we have now, it’s easy to think of products and software from the past as easy to make, or even easy to transition onto current hardware. Given the limitations they had and parameters they had to work within, I’m very impressed with what I played.

I spent a good amount of time with OutRun on the 3DS, and it played like a dream. I highly recommend giving it a shot, especially if you’re a first-timer. The sense of speed is just as sharp as it was back in the arcade days and experiencing it within the palms of your hands is real rush.