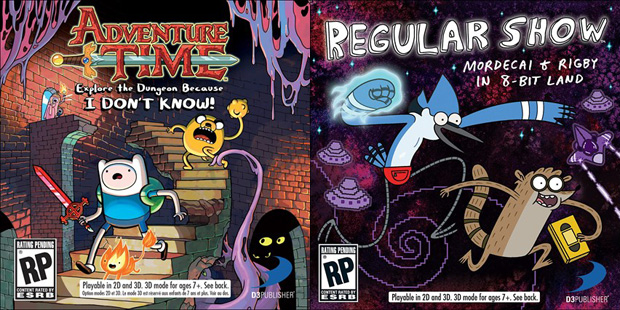 Wii U and 3DS box art for the upcoming WayForward projects

As you’ve already heard, WayForward is helming another pair of Cartoon Network games. There is Adventure Time: Explore the Dungeon Because I DON’T KNOW!, a follow-up to last year’s Hey Ice King! Why’d You Steal Our Garbage?!, slated for 3DS, Wii U, Xbox 360, PS3, and PC. In addition, there is Regular Show: Mordecai and Rigby in 8-Bit Land, a 3DS-exclusive adaptation of the exploits of everyone’s favorite park-dwelling slackers.

Nintendo Everything has scooped up Wii U and 3DS box art images of the Fall-bound cartoon romps. Those are things you can look at with the eyeballs in your skull.

I’m especially excited to see how Adventure Time will be tailored to home consoles. Part of me wishes for high-quality 2D animation, while another part hopes it adopts the polygonal look of the episode “A Glitch is a Glitch.” As for Regular Show, I just want a Double Dragon level in which you use Death Kwon Do moves.