[They said it couldn’t be done, but here we are… That’s right, folks! I’ll write every single one of the damn Bloggers Wanted entries if I have to! Sad puppy pictures all around! There’s still time left though. The Cblogs are right over here.  Don’t make me do this by myself. After about four more of these, it could start getting weird….. – Kevin]

I used to think that watching Akira a few times made me an anime nerd, but I had no idea how deep the rabbit hole went. When I first joined Destructoid, I didn’t even know what a catgirl was, Moe was only a character from The Simpsons, and I just assumed that arguments over waifus were a joke. Boy, was I ever wrong….. (People take their waifus/husbandos very seriously!)

That all changed when, at the behest of some forgotten Destructoid user, I decided to try out a game called Steins;Gate. It’s a twisted up, science-heavy tale about time travel, but it also doubles as the perfect introduction to otaku culture. Over the course of my playthrough, I would learn things about myself that I couldn’t ignore. Once I began to have a grasp of the terms used, I started understanding the jokes without even having to pop open the in-game glossary. More disturbingly, I was laughing at them. This stuff struck a chord with me.

I’ll never forget the first time I walked into, the café, May Queen. Faris-chan and Mayuri were dressed up in their maid outfits, and they were adorable as fuck. Something was different though. They kept saying “nyan” and they both had large, pointy ears. The weirdest part about this was that I already knew what they were. Fridays over in the Quickpost section of Destructoid had prepared me for this. These were catgirls. 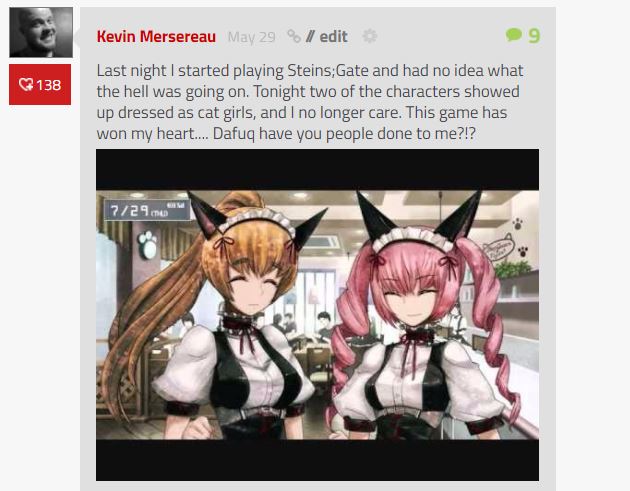 Yes, the users here had officially corrupted my naive, ever-so-slightly more innocent, mind. And I liked it! Catgirls were cute moe. From that point on, instead of getting slightly uncomfortable when I saw ladies with fuzzy ears and a tail who ended every sentence with a joyful “Nyan Nyan!”, I smiled.

Steins;Gate doesn’t just throw you into this stuff though. It’s a nice, steady easing process that lures you in with its fantastic, dimension-jumping plot. What starts out in, the main character, Okabe’s lab eventually devolves from surfing 4chan @channel to cosplaying at an anime convention. 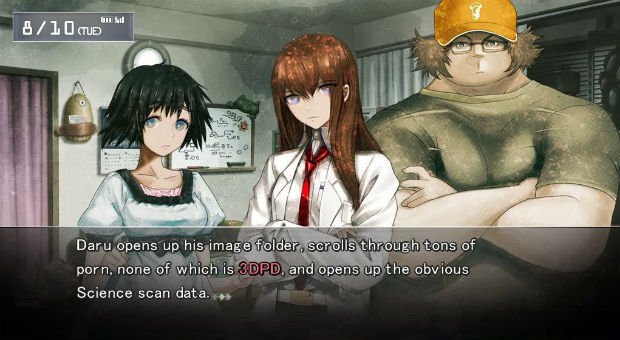 For newcomers to the subject material like myself, the in-game glossary is an absolute godsend. The characters are constantly dropping phrases referencing everything from quantum physics to terms like “chuunibyou” and “tsundere”, but the definitions/explanations are always just one button press away. This freezes gameplay and allows you time to familiarize yourself with various topics and colloquialisms that might otherwise fly completely over your head.

The overarching plot is one of the best science fiction stories ever told, but the characters are what sold me on both the setting and culture. The dialogue is snappy, and it doesn’t particularly hold your hand. For the first few hours, I had to pop open the definitions every other sentence to remind myself what certain words meant but, by the end, I genuinely had a pretty firm grasp of things without any need for assistance.

I’d already played games like Persona 4: Golden and the Danganronpa series prior to Steins;Gate, but this got me on some “next level” weeb shit. If you’ve never delved into the visual novel genre before, you’d be hard pressed to find a better entry point. The time travel elements of the story put Back To The Future to shame, and it offers a hilarious, loving send-up of all things otaku.

Steins;Gate may not have made me an expert, but it did gracefully introduce me to a culture that I had little to no knowledge of prior. For that, I will be forever grateful. Now here’s an awesome gif that also doubles as a healthy dose of heresy.