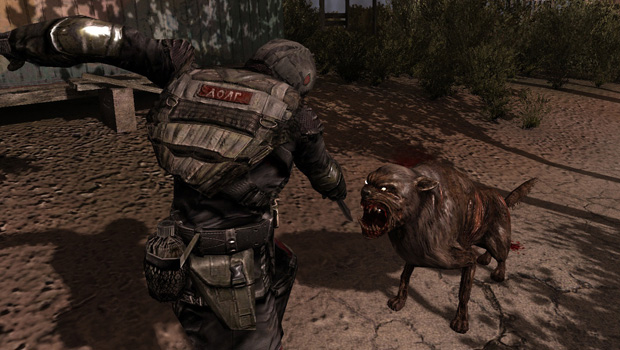 S.T.A.L.K.E.R.: Call of Pripyat has finally been announced, and yes, it does in fact involve a large-scale operation going horribly wrong, and revolves around you coming in to figure out why while trying not to get yourself killed.

Taking place right after the ending moments of Shadow of Chernobyl, Call of Pripyat will add things like a new interface, sleep functionality, more terrifying creatures, and additional characters. Y’know, the usual.

See that, uh … thing up there? Does that or does that not vaguely remind you of the dog with a human head from the movie Invasion of the Body Snatchers? I’ll tell you what, if there’s one monster that never ceases to scare the crap out of me in games, it’s the ones that resemble dogs.

Anyway, Call of Pripyat is headed for an autumn release this year on PC, but the name is a working title, so there’s always a chance it could change long before then. Hit the break for the full press release.

The project is slanted for release in autumn 2009.

The events of S.T.A.L.K.E.R.: Call of Pripyat unfold shortly after the end of S.T.A.L.K.E.R.: Shadow of Chernobyl. Having discovered about the open path to the Zone center, the government decides to hold a large-scale military “Fairway” operation aimed to take the CNPP under control.

According to the operation’s plan, the first military group is to conduct an air scouting of the territory to map out the detailed layouts of anomalous fields location. Thereafter, making use of the maps, the main military forces are to be dispatched.

Despite thorough preparations, the operation fails. Most of the avant-garde helicopters crash. In order to collect information on reasons behind the operation failure, Ukraine’s Security Service send their agent into the Zone center. From now on everything depends on the player.