Leave it to Nintendo to make “free to play” weird.

This time, thankfully, it’s my kind of weird. Rusty’s Real Deal Baseball is not a baseball game. Rather, it’s a compilation of baseball-themed minigames. There’s a hitting minigame, for example. Perched at home with a bat, you eye a pitching machine at the slab. Then it erupts from the ground and you find that it is a man in a suit with a pitching machine for a head that pitches you the balls to hit with his man arms.

Also, there’s a dog whose wife left him and you have to haggle with him to buy more minigames with real world money. 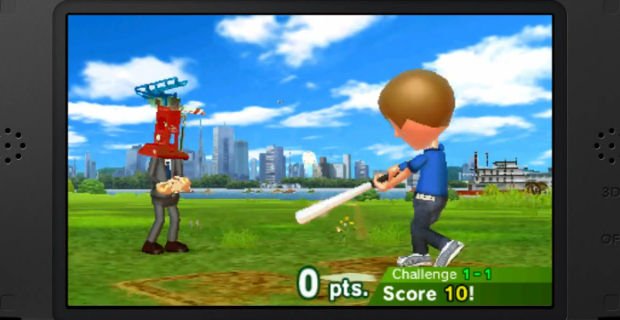 Rusty’s Real Deal Baseball is free-to-play in Nintendo’s lexicon. I see it as more of a demo. Everyone will be granted free access to the first six levels of the aforementioned batting minigame, Bat & Switch (hah!) which you get to by jumping into your Nontendo produced 4DS entertainment system. This game is so weird and goofy and I love it. “The localization guys had a field day,” I’m told.

The pitcher has a suit and a pitching machine head. And starts throwing some wicked curveballs you have to belt out into the skyline, simply with a well-timed tap of the A button. If you back out of the minigame (and out of your magic game system), you can go visit Rusty’s shop. 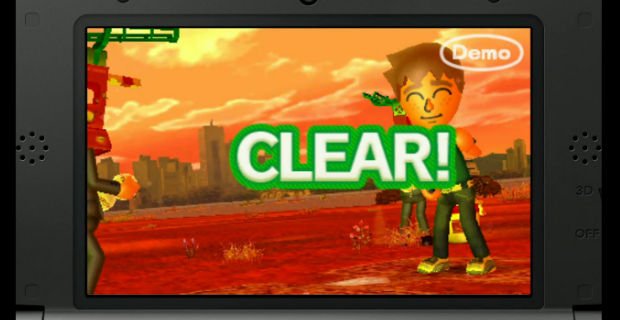 Rusty’s wife has left him. His girlfriend thinks he’s a deadbeat. He has 10 mouths to feed — his pups. Rusty is a dog. He is also a shop owner, just trying to make ends meet selling minigames.

When you go to visit Rusty, you’re treated to dialogue “episodes” wherein you try to convince Rusty to sell you another of Real Deal Baseball‘s 10 minigames, but at a bargain. Unless you’re an impatient moneybags who hates fun, in which case you can pay the base $4 that each minigame is priced at outright.

But $4 is a lot for a minigame (that would be $40!), which is why we’re going to haggle with Rusty and learn a little bit more about him along the way. Thankfully, removing any shred of buyer’s remorse, one of Rusty’s pups will always be privy to the conversation to inform you if you could get dad to go lower, or if he’s truly, desperately at wit’s end. They wouldn’t reveal how low Rusty’s prices go, but I’m assured it’s significantly lower than the base price. 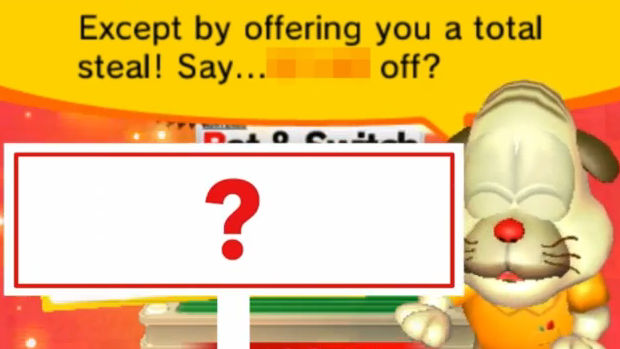 Doing well in the minigames you do have — or the handful of demo levels — also nets you stamps and items that aid in your haggling. Aside from Bat & Switch, I’m told there is a fielding minigame that requires you to catch balls with the circle pad, as well as an umpiring minigame that might manage to give me empathy for blue. You start calling balls and strikes, but as you reach higher and higher levels you end up responsible for foul tips, fouls, balks, hit by pitches, and more.

As a fan of baseball, minigames, and dog shop keeps, I am stupidly into the idea for Rusty’s Real Deal Baseball. Provided you can haggle those minigame prices down and cut some deep deals, it should be a fun experiment in variable pricing. I can’t wait to have conversations with Rusty, bathe in the resplendent nature of the writing team’s puns, and play wacky minigames.