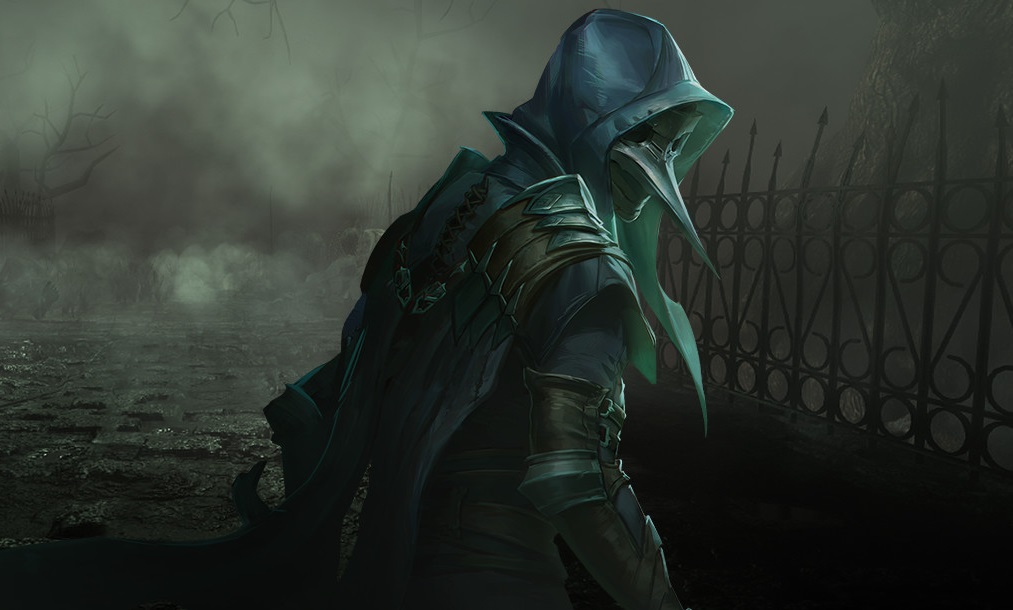 In my four decades of gaming, there have been very few ‘new’ genres, and even fewer that have proven to have lasting staying power. Aside from the phenomenon that is Battle Royale, there is probably only one 21st-century-birthed genre that has proven itself with consistent and cemented success with developers, player communities, and cash registers: The Soulslike.

A sub-genre of RPGs, Soulslikes generally feature grim, deep lore, an emphasis on exploration, build-heavy protagonists, and a typically gloomy, gothic aesthetic. Oh, and they’re also hard as nails. And yet, despite their punishing difficulty, steep learning curve, and joyless demeanor, the Soulslike genre has enraptured a huge community of devotees, won over by FromSoftware epics such as Demon’s Souls, Bloodborne, and one of the finest releases of the year to date, Elden Ring.

Capitalizing on the current craze from hard ‘n’ heavy hack ‘n’ slashers, indie out OverBorder Studio and British publisher Team17 have tossed their own night-black cape into the gloom, with the arrival of their own take on the Soulslike, Thymesia. With a dark, nightmarish aesthetic, a despondently topical tale of an unstoppable pandemic, and teeth-clenching, merciless difficulty, Thymesia makes no bones about its desire to be the next challenge for sadistic fans of the genre mercy forgot. 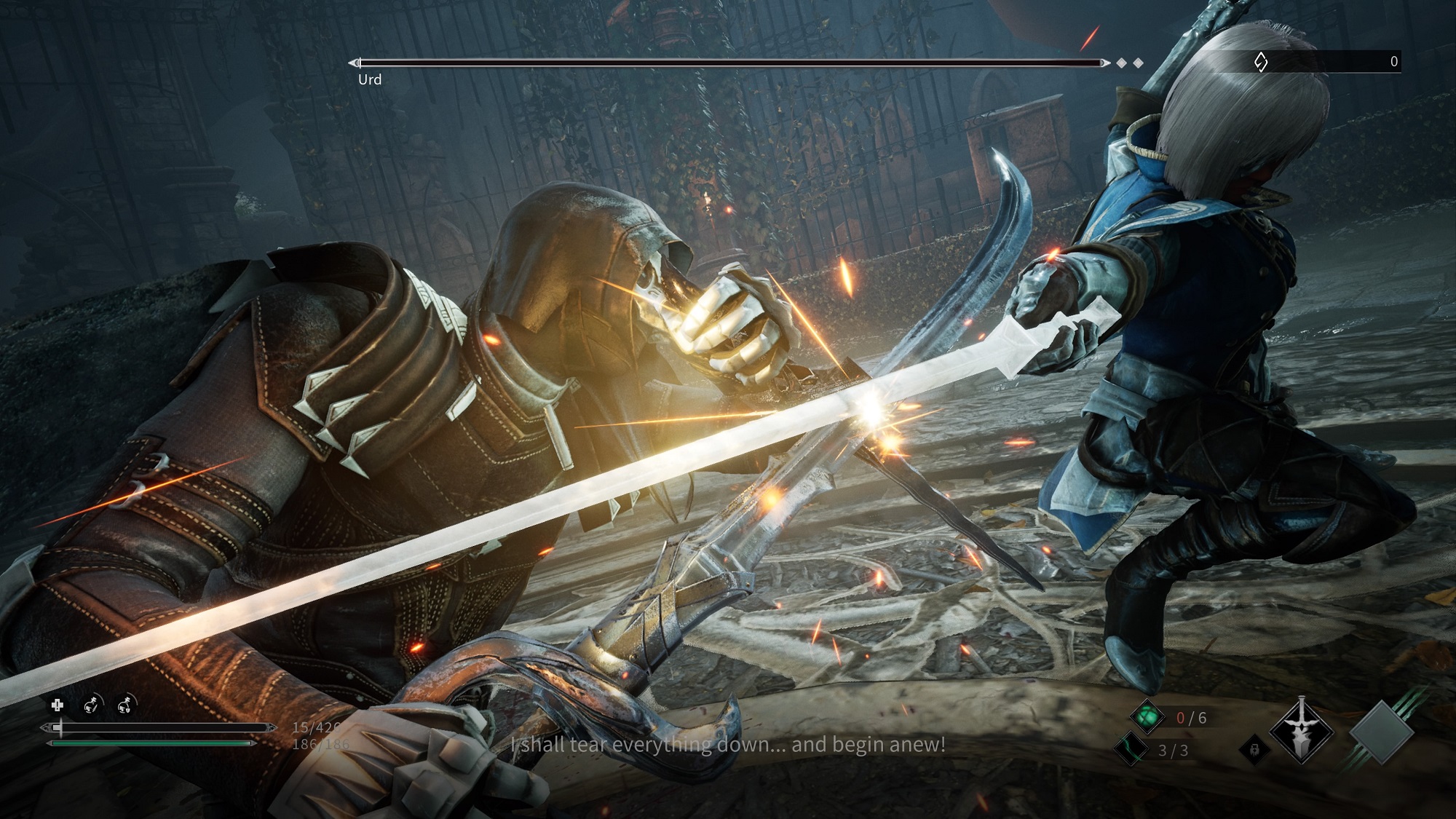 Thymesia, (a Greek derivative for “Memory”), is set in the despairing Kingdom of Hermes, a once thriving community now awash with plague, calamity, and death. Into this sorrowful city strides Corvus, a mysterious young stranger suffering his own affliction, that of total amnesia. Not long after picking their way through the body-strewn streets, Corvus enters the palace walls only to find themselves on the business end of a right royal beatdown. In the aftermath of defeat, our hero awakens in the tranquil-yet-gloomy everglades of Philosopher’s Hill — cared for by a very young girl, wise beyond her years, Aisemy.

Within this framing device, Corvus must revisit the events of their recent life, piecing together the actions and reactions that brought them to Hermes’ diseased gateway. Along the way, they must gather small and subtle fragments of information to help their new compadre put together the lore of the land, the conception of the plague, and the actions that brought a relatively peaceful city to its knees. Should they attain total recall, then Corvus and Aisemy may discover more than just the falsehoods of their own legacies — they may uncover the answers to ending the epidemic altogether.

A punishing action RPG, Thymesia wears its influences so broadly on its steel-coated sleeve that it’s frankly ridiculous not to call it out immediately. Thymesia is not only a Soulslike, but it has gone to great lengths to be as reminiscent as possible of its bigger-budgeted, larger-scale brethren. Every box is ticked, from the game’s overall dour demeanor, to its beacon-lighting save points, steel-clashing combat, extra large boss battles, lengthy “single line” health bars, and, of course, slow-fade red writing whenever birdy hits the bricks, (although here “Memory Interrupted” replaces “You Died”).

Under the watchful eye of their young friend, Corvus embarks on a series of “Recalls,” essentially embodying their own adventures in real-time. These adventures see Corvus recall the events that brought the kingdom to its knees and saw our beak-faced pal draw a big ol’ blank. What this translates to, gameplay-wise, is a series of mini-mapped adventures, that see Corvus explore various areas of Hermes and battle it out with the infected locals, the decaying remnants of the king’s army, and more than a fair share of nightmarish monsters and mutants.

As is the wont of the genre, every enemy in Thymesia is a legitimate death threat, with even the most Ray Harryhausen-looking skeleton carrying the ability to blast Corvus out of the memory bank and back into the cold emptiness of his own brain. Combat, from the lowliest grunt to the mightiest boss, is a matter of pattern recognition, precision evasion, and expert parrying. You know this, of course you do, because you know the Soulslike score. Importantly, OverBorder Games knows that you know, and wastes little time setting the metaphorical dinner table — throwing you into a pit of misery and raining axes onto your dome in a matter of seconds.

Corvus is equipped with a dagger for parrying, and a saber to lay wounds on their opponent. In addition, the hero’s razor-sharp talons can be used to keep those wounds open, with combat coming down to a tight formula of Saber strikes to damage armor, Claw strikes to reduce health, and smart parrying to open up the enemy’s defense. The enemies also have specials, that can only be parried via smart acrobatics or the throwing of mythic “Raven Feathers.” Unfortunately, this last mechanic is very poorly implemented, with feather-tossing effectiveness proving such a coin toss, that it’s almost always better to hit the skids and live to fight another round. Hopefully, this can be improved in a later update. 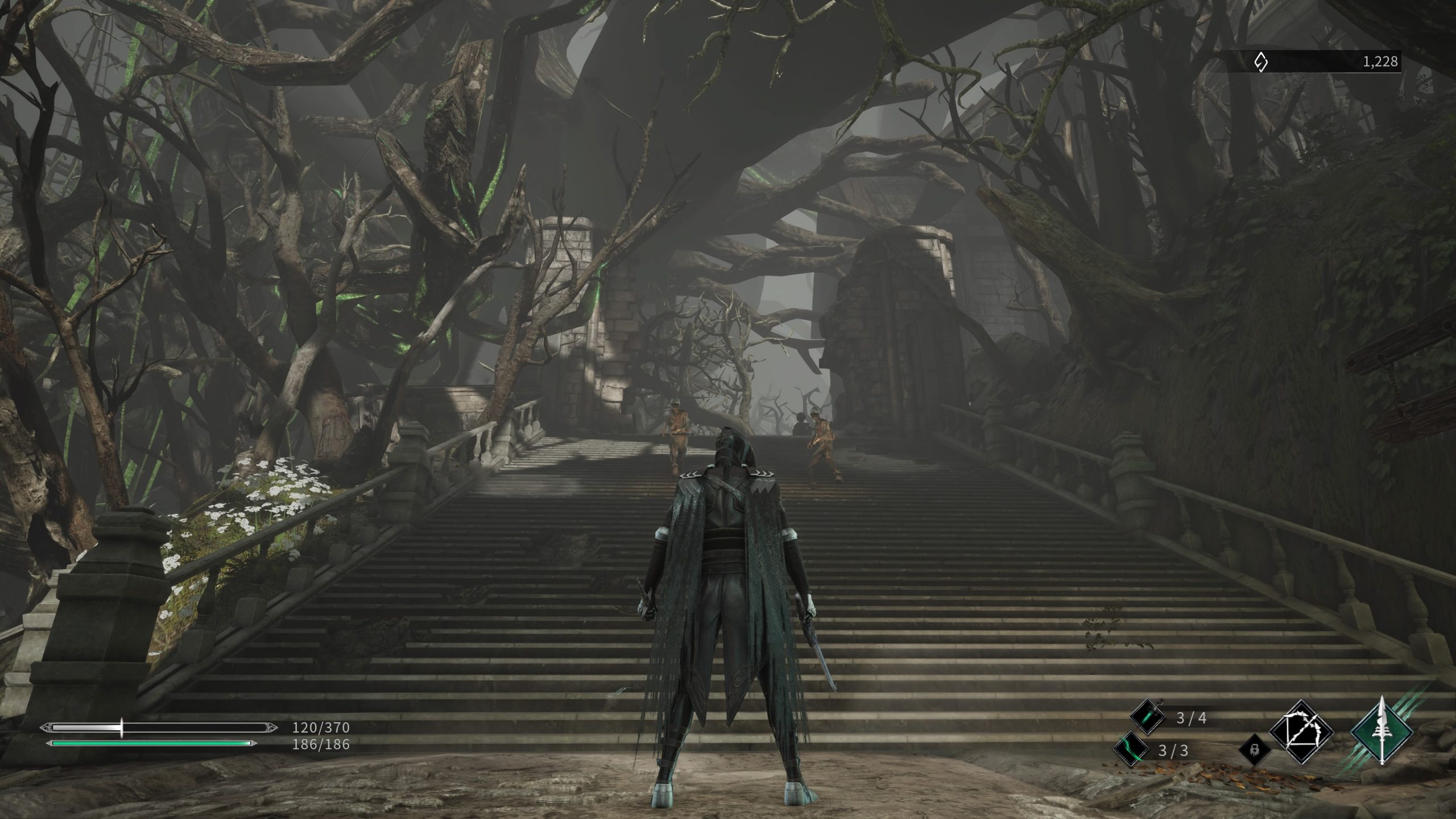 As well as the old one-two, Corvus can use their mastery of plague control to “Reave” weapons from his opposition. Upon their defeat, Corvus can use a charged talon attack to essentially “steal” a spiritual version of the enemy’s axe, scythe, spear, broadsword, bow, or any other skull-splitter. Using “memories” (XP) gathered from battle, (and from piecing together their fragmented past), Corvus can level up not only their attack, defense, and acrobatic abilities, but also apply various effects to their Plague arsenal, enabling combos, air assaults, floor sweeps, and earth-shattering ground pounds.

As you might expect, Thymesia ain’t easy, and newcomers need to be wise to the combative structure that is the core of both this release and the genre itself. Importantly, however, the combat is never unfair, and is merely a matter of patience, wits, reactions, and experience… Oh, that said, the “Varg” boss has a painfully unfair unblockable, which is pretty much the only time that game had me clucking my tongue in true “That’s Bullshit” fashion.

A game that places its core action above all other factors, it is vital that Thymesia‘s combat is both solid and appealing. And I’m pleased to report that it is. A meaty challenge designed to punish the arrogant and the impatient lies herein, while box-ticking grinders will get a kick out of gathering all of the Plague Weapons, digging out the memory remnants, and experimenting with the game’s potion and alchemy mechanics. This array of build opportunities lends some sense of variety to Corvus, which somewhat makes up for the protagonist’s complete lack of visual customization. 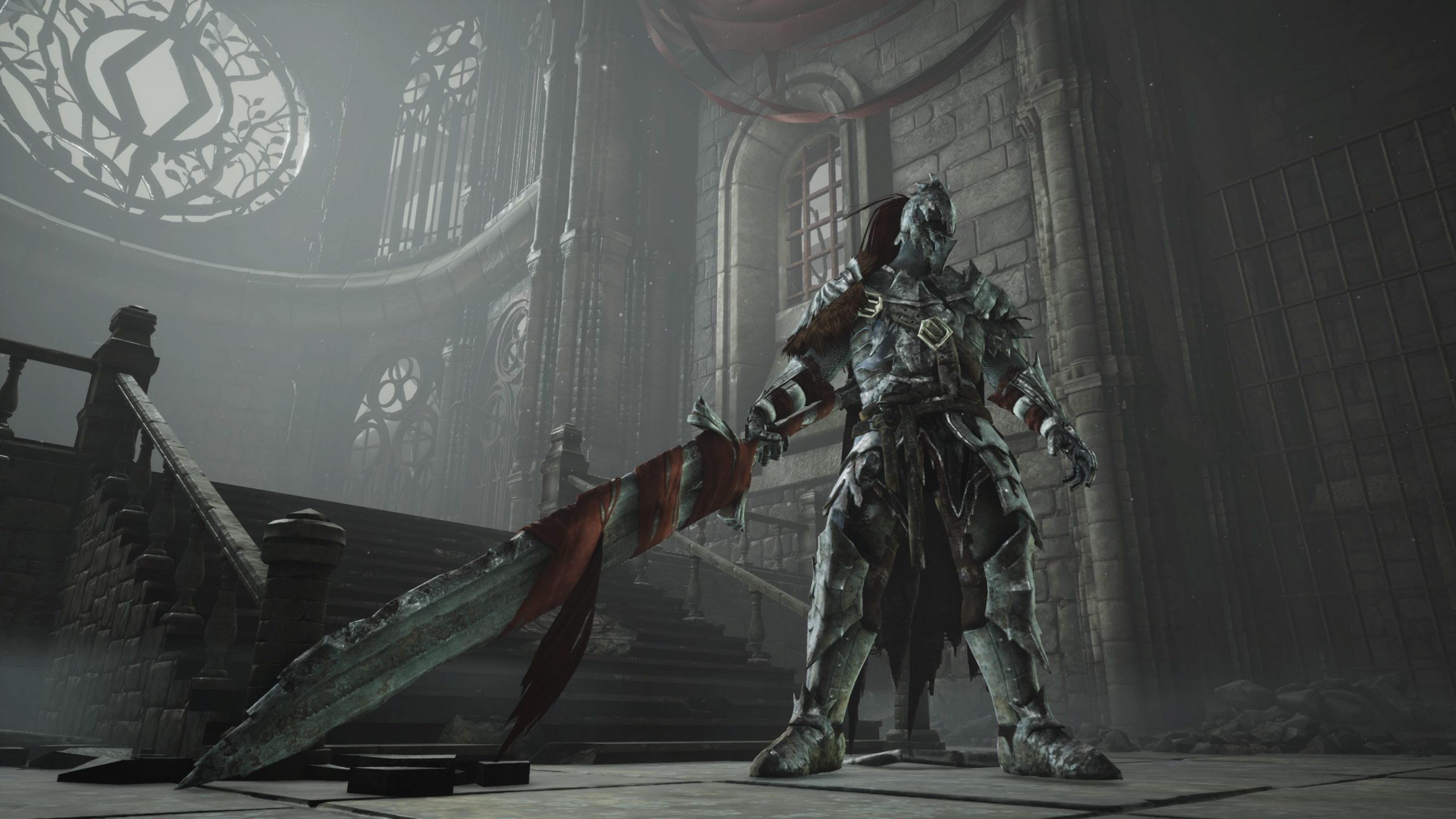 While it may seem that this review has been overly focused on the fighting, it has to be noted that this is by design. Thymesia, as a low-to-mid-budget title, doesn’t have too much in the way of opulence on offer. The cast is incredibly slim, there is no voice-acting or narration, and the Kingdom of Hermes feels somewhat compact when compared to the gargantuan labyrinths that genre fans will be used to. Thymesia‘s tale is conceptually interesting but ultimately accounts for little more than picking up a hell of a lot of notes. These clues form a tale of conspiracy, classism, and the alchemic arts, but without the necessary tools to dramatically deliver upon ideas. Thymesia does offer multiple endings depending on how much of Corvus’ memory is restored, so 100%’ers will be in their element.

Thymesia is undeniably hurt by its limitations, but OverBorder Studio has worked within those same limitations to deliver a short, sharp, and impactful gameplay experience. The visuals are adequate, the special effects are impressive, and the highly cinematic score punctuates the action very well indeed. Importantly, Thymesia is rock solid from a technical standpoint, running (on PS5) at an extremely steady frame rate and spotlighting its action with a reliable, smart, and unobtrusive camera.

Taking feedback from the early demos, Overborder has improved control response time, all but eliminated camera drift, and ironed out several other issues pertaining to the game’s combat. If the first demo didn’t work for you, know that many of the problems have been addressed. Today, Thymesia plays very cleanly, and feels good while doing so, ensuring that the only thing you’ll need worry about is getting a dagger or three in the spleen. 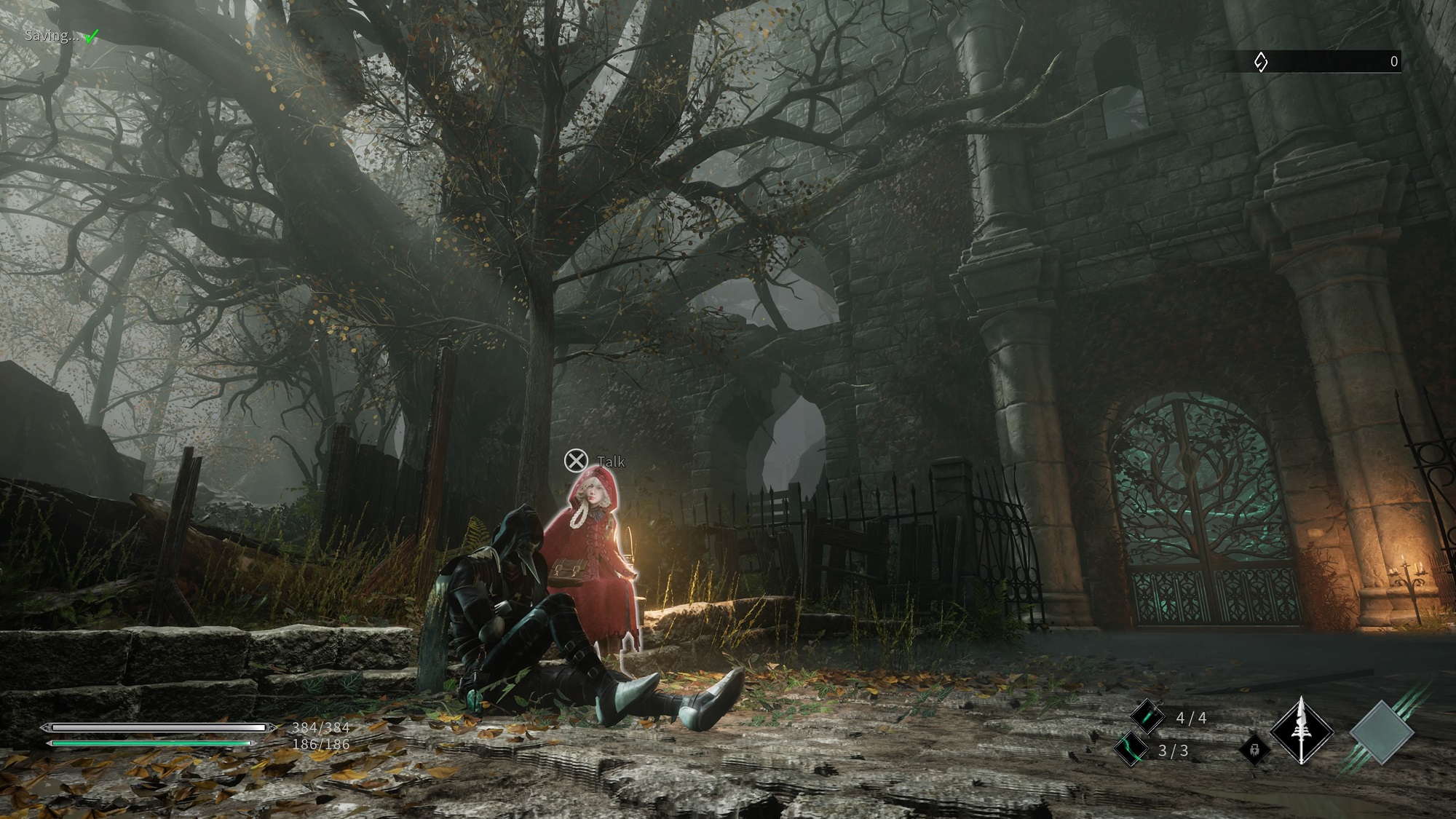 I have zero doubt that right now, somewhere on the internet, somebody is writing “A Poor Man’s Dark Souls.” And while it is, frankly, impossible not to view Thymesia as a lower-budgeted version of its blockbuster brothers, that easy soundbite is doing the title an injustice. Those yet to dive into the Soulslike genre should consider giving this new release a crack of the whip, as Thymesia works well as an “onboarding” title for those who fancy dipping their toe into blacker waters but are perhaps not ready to smother themselves in the hundred-hour epicness of a Bloodborne or an Elden Ring. Conversely, genre veterans who are willing to compromise with Thymesia‘s shortcomings will find several hours of sick ‘n’ satisfying action adventure lies in wait.

Thymesia isn’t shy about its influences, an admittance that helps and harms the title when inevitably compared to its legendary brethren. But any Soulslike fan who is willing to look past the budgetary shortcomings will find this modest monster masher a fine way to spend a gloomy weekend. While Thymesia is certainly lacking in some key departments, the solid control, satisfying combat, moody atmosphere, and compelling challenge are still well worth crowing about.