Hidetaka Miyazaki created a legacy with Demon’s Souls. With three Armored Core games under his belt at From Software, Miyazaki dared to capture the spirit of the King’s Field series for a new era, and thus the Souls series was born. His philosophy of “less is more” served as a driving force for the franchise’s allure, and his influences permeate throughout.

In just six years we’ve seen four total games using the formula, and despite taking a step back for Dark Souls II, Miyazaki returns to the driver’s seat with Bloodborne. 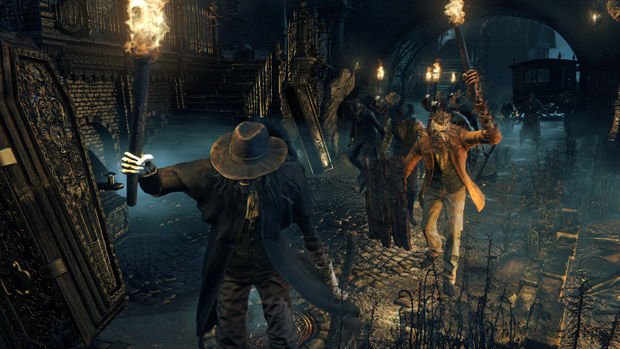 Right from the get-go, Bloodborne feels right on the PlayStation 4. I’m glad that From Software decided to focus on just one lead platform, because not only does it look like a current-gen game, you don’t have to worry about a community split for the multiplayer element. Everyone is under one roof. Aesthetic beauty aside, Bloodborne runs great from a practical standpoint as well. There was only one room where I felt a stark drop in terms of the frame rate, and it was only for a few seconds. There’s pop-in abound and some very long load times (in a few instances I counted one minute), but this is the most stable Souls game to date.

Character creation remains fairly unimpressive in terms of crafting a character model, and the starting class setup (“backgrounds” in Bloodborne) are still just guidelines. Once you get past the surface though you’ll quickly learn how different this iteration really is. For starters, the “weight” stat is gone, adding much more freedom in terms of movement. Players are encouraged to constantly dodge and run with a more forgiving stamina bar, a concept epitomized by the fact that the game’s only main shield is basically a joke item.

The pistol off-hand and weapon main-hand are the new go-to loadout, and the pistol is less of a ranged powerhouse and more of a new way to riposte counter. Hand-to-hand combat is the core focus of Bloodborne — heck, even magic is downplayed significantly, only offering a scant few (useful) spells. With this tradeoff comes a remarkable increase in melee superiority, with faster attacks and the power to transform weapons into a slower, more deliberate build with a quick tap of the L1 button, which can even be done mid-combo. You’ll need these enhancements too, since Bloodborne is roughly as challenging as its predecessors.

To mix it up even further, players can gain some lost health back by being aggressive with the new “Regain” system, mirroring a mechanic found in select fighting games. It truly represents the new combat flow, frequently forcing you into the fray with an intriguing risk-reward scenario. There’s less equipment in general to keep track of, which will be a divisive issue among fans. While I’m always excited to acquire a massive collection of 50 or more rare weapons, I appreciate the downplay of gear in Bloodborne. It puts more emphasis on raw skill and less on item hunting, allowing players to spend more time specializing in what they like without worrying that their favorite weapon will be outclassed around the next corner.

That’s not to say there aren’t secrets however, as there are plenty of hidden nooks that contain useful items. You’ll need to do lots of searching since blood vials replace the regenerating “flasks” of the past two Dark titles. It’s an old-school system that mirrors Demon’s Souls’ herbs in that you’ll have to either farm for vials or purchase them to continue to heal. You’ll keep seeing this concept repeatedly throughout the game — Bloodborne really feels like a mix of everything From has learned thus far.

Beyond these changes, it follows the same basic formula of gathering souls (now called Blood Echoes) from defeated enemies to spend on leveling up or items. You still can’t pause the game, and bonfires return as lamp checkpoints. In other words, business as usual. There are a few subtle differences beyond the combat overhaul, though. Insight points are gained over the course of the quest and can slightly change environmental layouts and enemy placements, while some enemies can absorb your souls, forcing you to defeat them to reclaim the souls. Nifty tricks like this help cement Bloodborne as its own entity while managing to play it safe, utilizing the core foundation that put Souls on the map.

The way the game is laid out is also a Souls hodgepodge of sorts. There is a sprawling interconnected world like Dark Souls, but it also has a separate hub world with teleporters much like Demon’s, allowing you to level up, access storage, shop, and a weapon bench to socket stat-infused gems. There’s a huge emphasis on shortcuts, as you’ll come across one roughly every five minutes.

Don’t worry, Bloodborne also keeps the cryptic nature of the series intact. The story is vague but provides enough hints and linked tidbits to keep it coherent, hinting at a universe ready to be pieced together by fans. Yharnam is a sufficiently creepy town complete with derelict zones, lush forests, and awe-inspiring towers, though a few areas feel relatively indistinguishable from past games. With all of the unique settings in the past like endless lakes of fire and terrifying poisonous swamps, From Software was bound to start running low on ideas at some point. 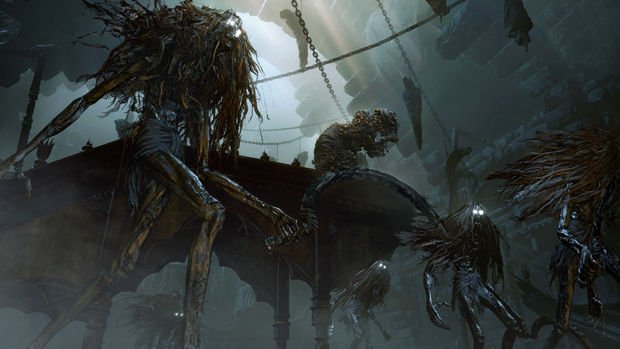 Still, the studio makes those areas sing, and nails the atmosphere throughout. Subtle effects like smoke pouring out from the ground go hand-in-hand with the glowing eye animations for some enemies, and the landscapes and denizen designs mesh perfectly. While I wouldn’t say this cast of NPCs is at the top of my list, you’ll meet a few interesting and terrifying faces.

I was able to test out multiplayer in a live environment since Sony turned on the servers pre-launch, and I have to say, it’s par for the course — and I mean that as a compliment. Player-presented hints are still intact, as are phantom blood spots to show player deaths, and of course co-op and PVP are in. Multiplayer now inherently costs Insight points (you’ll have ample supply as you continue through multiple playthroughs and acquire Insight items along the way), and to even play PVP you’ll need an Insight rating of 30, which you likely won’t earn until roughly 10 hours in.

While co-op is upgraded with the ability to password protect and create private lobbies to play with friends in a non-frustrating manner, PVP feels a bit more limited this time around. It doesn’t bother me as I was never particularly fond of the mechanic, but PVP fiends likely won’t stick around as long as they have in the past. With less weapons and spells to learn or counter there’s less meta on paper, though I’m sure that will continue to shift over time.

Bloodborne is a fairly lengthy romp, as it took me about 32 hours to complete on my first playthrough. There’s a decent chunk of sidequests and interactions, and of course, the call of New Game+ is inescapable. One thing that did disappoint me though is the general layout of the map after the curtain was closed — it feels less replayable, less sprawling than past games due to the action-oriented focus. As of the time of this writing I’m working on my second playthrough, but I’m not finding a whole lot of new areas like I did in prior New Game+ runs in other games. 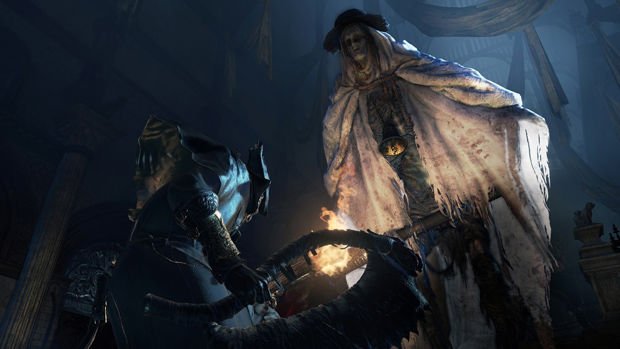 There is one caveat regarding the aforementioned lack of replay value. Although there were a few extra paths in older Souls games, the problem is that eventually, you’d memorize the layout anyway, eliminating the element of surprise and awe. But with randomly generated Chalice Dungeons in Bloodborne, that all changes. After finding one of four chalices in-game (even the mechanic itself is shrouded in mystery, so I won’t spoil it here), you can start running dungeons on your own, separate from the core game.

Said areas have their own unique layouts, traps, and even a few new bosses, and you can search for new dungeons online or share your own. With co-op and PVP supported in addition to the persistence of layouts throughout New Game+ runs, Chalice Dungeons may have legs beyond what was possible in past titles. I can see a strong community rising up in the future involving shared creations curated by challenge.

Bloodborne is an interesting mix of everything From Software has learned throughout its storied developmental career. Not everything will gel with fans old and new, but for the most part, the shift towards a combat-oriented game is a net positive. From Software is still one of the only developers left that makes you work for your satisfaction, and Bloodborne is damn satisfying.