Getting the bizarre gang back together

I’ve found that it’s a rather fruitless endeavour to guess which games will get a sequel — mainly because I’m usually wrong. If you’d asked me “Fraser, will there be a Zeno Clash II?” I would have confidently responded with “Outlook not so good.” The original Zeno Clash was a wonderful, absurd, and utterly unique game, and thus not something that one would ever expect to see the like of again.

It’s a good thing, then, that nobody asks me anything, because I would have looked rather silly. Zeno Clash II did happen, and I know this because I’ve been playing it. It’s a grander, more ambitious title than its forebearer, and is filled with oodles of insanity and no small amount of pugilism. With the added scope comes a slew of problems, however, and I suspect that it won’t be quite as fondly remembered as its predecessor. 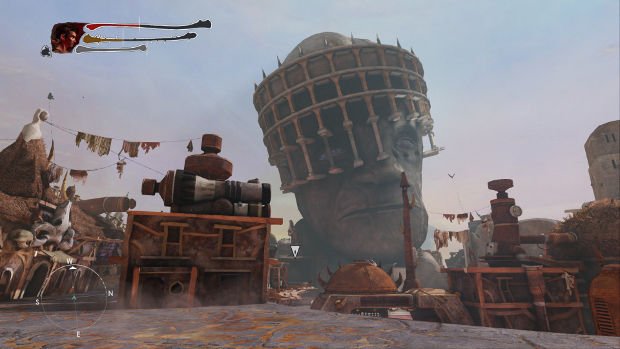 Everything is bigger in Zeno Clash II. The narrative, combat, and world have all been pumped full of steroids, but, like the shrinking testicles of a roid addict, this creates all sorts of problems. The first Zeno Clash was a short adventure with familial themes and lies uncovered, it was undeniably bizarre, but personal. Not so this time.

Instead we’re left with an all too familiar “epic” journey, one to defeat a big, bad Golem, and save the world. A freakish gallery of characters, both new and returning, crop up constantly, but only exist to move the confused plot forward, with no time given to developing the completely alien civilizations that pepper the game-world.

Protagonist Ghat collects companions like Pokémon, barely giving them the time of day before putting them in an invisible ally prison, only really bringing them out for certain fights. There’s a strange dearth of character or world building, with the journey itself becoming the focus.

It’s a substantial journey, though. Ghat and Co travel the world by land and sea, going to haunts both new and old, with each trying to outdo the others in strangeness and to the point where they begin to defy description. There are the deadly, monolithic houses of the Golems, dead lands populated by horrifying animated statues, a desert filled with angry shrimp-people, and rolling grasslands where the flora spurts out bubbles and fountains of water.

There are countless moments where I felt like a tourist, stopping dead in my tracks to gawk at a gigantic statue or an impossible structure. Unfortunately, gawk was all I could really do, as there are few interactions available in Zeno Clash‘s many areas. Skill totems — for the tacked-on RPG element — and chests are the only reasons to go off the beaten track, and the lack of a proper map makes that unnecessarily obstinate.

Ghat’s not a tourist, though — he’s a man who punches things in the face, repeatedly. He does it well, too. Zeno Clash II boasts an extremely competent first-person melee system, and it’s both simple and rewarding. 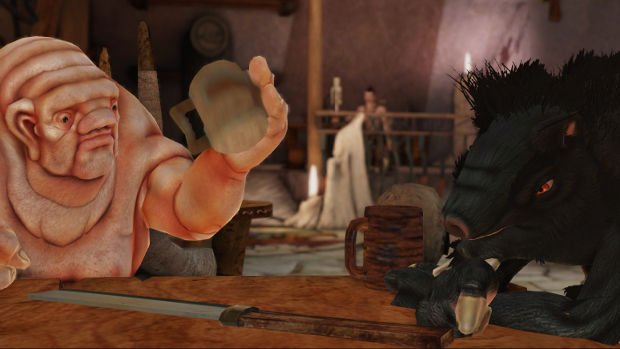 The system is built around stringing combos together to raise the special meter, before firing off an energized, powerful attack that can fling enemies all over the place. Rather than demanding players unlock attacks as they play, it’s skill-based and one can experiment with all of their attacks right from the start.

Grabs, stuns, throws, enemy juggling, kicking, and ramming can all be pulled off without the need for keyboard hammering, and the combat tutorial can be accessed again and again if you fail to recall a particular combo or want to practice the all important dodge and counter moves.

Getting into a rhythm is paramount. Foes, appropriately, have tells. With experience comes the ability to perfectly time a dodge, and then come back swinging. It’s fluid, and feels a bit more refined than in the original, if not all that different.

Hammers and guns can be picked up from fallen enemies or uncovered in chests, but they are a lot more limited than Ghat’s fists. The hammers are extremely slow, though they do pack a punch, and can scatter groups of enemies. I can’t say I really cared for the firearms, though. They are flimsy things with only a tiny amount of ammunition, and the feedback is awful, like trying to shoot people with a peashooter. 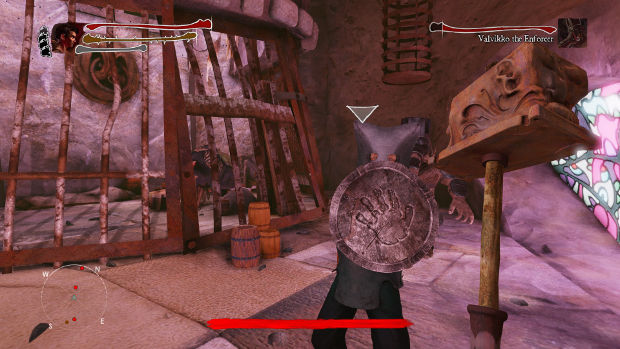 One area, the shrimp infested desert, tasks Ghat with climbing up some rather lofty cliffs. Surrounded by these sheer drops, the bouts really became a joy. Beset on all sides by foes, I’d happily uppercut hideous shrimp-men into oblivion (and off the side of the cliff) all day long. It’s a shame that the environment doesn’t play much of a role in the action outside of that instance.

Anywhere else, being surrounded by foes is just, frankly, fucking awful. With its temperamental lock-on feature, first-person perspective, and uncompromising field of view, Zeno Clash II seems to have been designed specifically with one-on-one battles, yet continually throws little armies at Ghat.

Foes get in each other’s way, constantly jockeying for position, and fill the screen with flailing limbs and angry bodies. It becomes even more infuriating when you have no idea that there’s a bugger right beside you, about to punch you right in the head, but you can’t see him because of the ridiculous limitations of the FOV (which are apparently going to be fixed in a patch). The hit detection can be fairly iffy, as well, with strikes often not landing when it really looks like the should. It is far more noticeable in these big, annoying brawls than in less crowded fights.

One might think that’s where bombs would play a role — but you’d be completely wrong. No matter where they are looking or what they are doing, every bloody bastard seems to know you’ve chucked a bomb, and will appropriately flee. Throw a bomb into a pile of ten enemies, and you might slightly injure one or two. 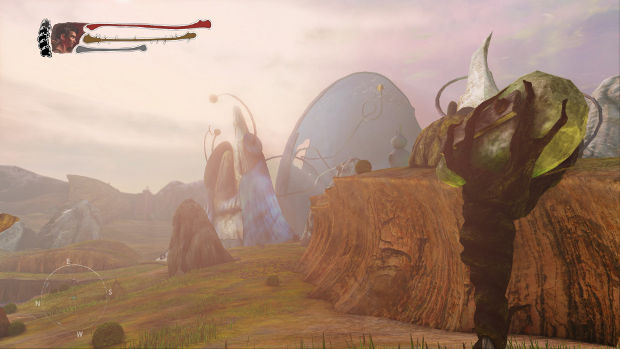 On top of the bombs, Ghat gets three other special tools, Golem devices, to aid him on his ten-hour journey. It is the Golem hand that’s most worthy of special mention. An invention that bears more than a passing resemblance to the Go’ald’s hand weapon from Stargate, it links objects and enemies together. It’s used for some of Zeno Clash‘s simple puzzles and a boss encounter, but sees the greatest use in ordinary battles.

When two opponents are linked together, an attack on one of them affects the other. There’s nothing more to it, but it’s a damned godsend. Although the link only lasts for a handful of seconds, it’s an effective way to dispatch groups of angry fellows before Ghat gets surrounded.

And whatever you do, don’t go near them in a scrap. Inexplicably, allies seem to close their eyes during battle, and don’t appear to notice if Ghat’s standing right next to them. This inevitably leads to friends punching you in the face as often as foes. 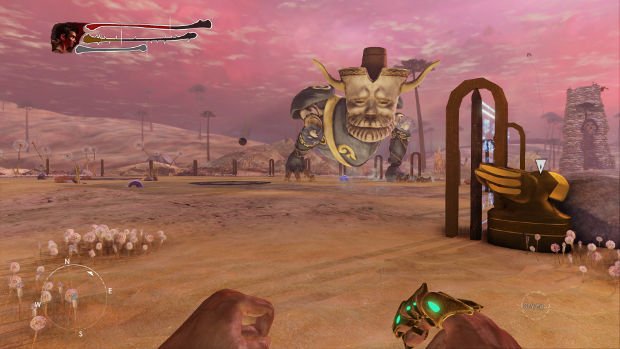 I confess some disappointment that most of what I want to talk about pertains to the combat, instead of the exceptionally imaginative setting and its residents. Lamentably, the world is never elevated beyond a gorgeous, bizarre battle arena, and its colorful denizens immediately become less interesting when they start to speak thanks to the shoddy voice acting and the rather dreary, pseudo-philosophical script.

The Golem is, admittedly, an interesting chap. Ostensibly the bad guy, he really believes in what he’s doing, and wants to bring law and order to this chaotic world because he genuinely thinks that everyone would be better off not being completely flipping mental. He’s certainly more sympathetic than Ghat, who comes across as a somewhat petulant, moody rebel, made all the worse by the fact that his voice actor sounds like he’s half asleep.

The world of the original Zeno Clash was genuinely interesting, and certainly an example of less is more, but this time around it merely seems interesting, before revealing itself to be a bit shallow under the veneer of zaniness, though the veneer is certainly impressive and did succeed in keeping me eager for more.

Zeno Clash II might be bigger than its predecessor, but it fails to be truly better. It’s worth experiencing for those who loved the original, because it still contains a lot of what made that title unique, and the combat — when not descending into huge brawls — is wonderful. But in an attempt to spin a meaty, almost Argonautica-style epic, ACE Team might have gotten a wee bit lost, just as I did when I tried to use that good-for-nothing, half-arsed map.