I love Falcom, I love the Ys series, and I love action RPGs, but this is my first time experiencing it all on a PC. The recent PSP releases have all been fantastic, but Sony’s portable is on its last leg, and while I’d love to dive into a Ys game on the Vita, it’s a bit too early for that.

Ys Origin was released for PC in Japan in 2006, making its North American debut only now, thanks to the folks at XSEED Games. As a Steam release for PC, this game now has the potential of reaching a wider audience, and as a series fan, I think that’s great.

I was a bit worried that a six-year-old game might have lost its shine and would be a tough sell, but now that I’ve played it, I have no worries at all. If you like RPGs, this should be your next Steam purchase. 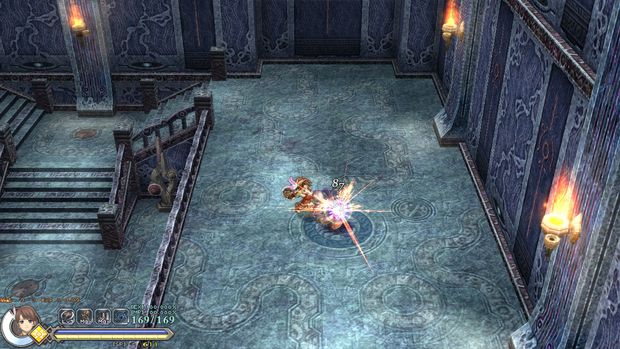 The land of Ys had been peaceful for ages, but a demon invasion began suddenly, throwing the world into chaos. This attack forced the twin goddesses to use all of their magic to send their palace into the sky away from harm. But the demons were serious about taking the whole kingdom out, so they built a tower tall enough to climb up to continue their attack. At about the same time this tower was built, the two goddesses went missing.

In Ys Origin, as Yunica or Hugo, you’ll set off to find and rescue the goddesses. The entire game takes place in Darm Tower, which might seem like a long time to be in one building, though things stay interesting enough that you’ll never feel stuck. In classic Ys style, you’ll learn abilities and moves that let you access new areas of the tower, meeting bigger and badder bosses along the way as you make your way toward the top. 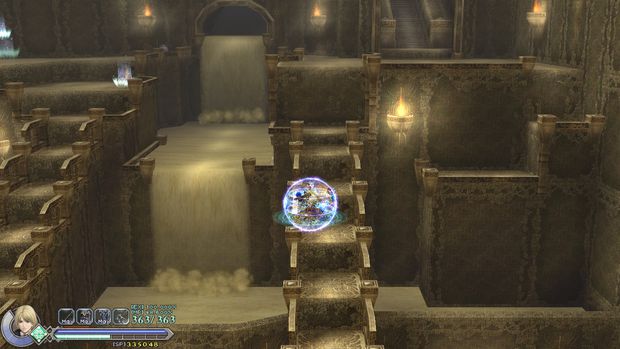 No disrespect to series hero Adol Christin, but Ys Origin is like a breath of fresh air for those that have played other series games, mostly because you’ll get to play as someone else, and they’ll actually speak. This game works as a sort of background story to the world of Ys, taking place hundreds of years before Adol’s first adventure kick off.

Players take control of either a young female axe wielder, Yunica, or a magician, Hugo; the game’s story and path change depending on which character you choose. Their stories, while not exactly deep or involved, seem to give these characters more motivation than Adol’s simple sense of duty. I wouldn’t go as far as to call Origin’s story compelling, but at least you’ll continue to be engaged as it progresses.

I played as Yunica, a young girl that comes from a long line of Ys most respected magic-using knights. It’s too bad that she sucks at magic. To make up for that, she has built up her strength through self-training, and is quite handy with her axe blade. As a personal friend of the goddesses, Yunica has a personal interest in finding them, so she sets off into Darm Tower full of determination, though perhaps lacking a bit in battle experience. 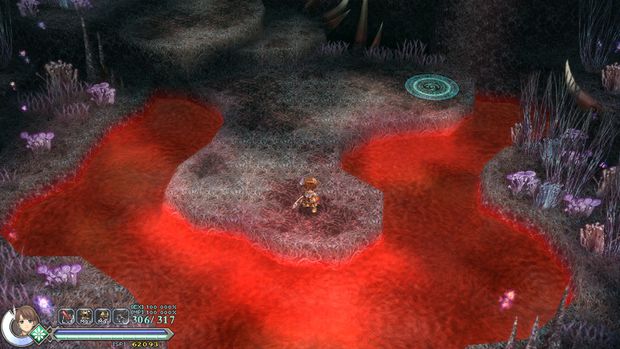 The gameplay in Origins with Yunica gives you all of the hacking and slashing you’d ever want, with a focus on fast, fun, close-range combat. You’ll rip through strings of monsters of steadily ramping challenge as you progress through Darm’s many rooms and corridors, mopping up the loot and increasing your abilities all the while. And as in other Ys games, you’ll eventually learn abilities that add more powerful elemental moves to your standard slashes and jumps, helping you take on the stronger enemies. Some of these moves also have a platforming benefit, helping you access new areas of the tower. There are plenty of traps, secret passages and doors, and puzzles to figure as you make your way through zones of floor blocks, and at the end of each awaits big, nasty bosses.

The boss battles in Ys Origin are quite challenging, but are also highly rewarding when finally completed. What I’m trying to say is that you should be ready to die and retry. These are your classic trapped-in-a-room fights against a screen-filling baddie, and you’re always in way over your head at first encounter. They’ll all have you running around like mad, trying to avoid attacks and projectiles while trying to spot a weakness, and then going in to attack that weakness without dying. Even set on normal I fought though some pretty tough battles, but I now consider these to be high points of the game. 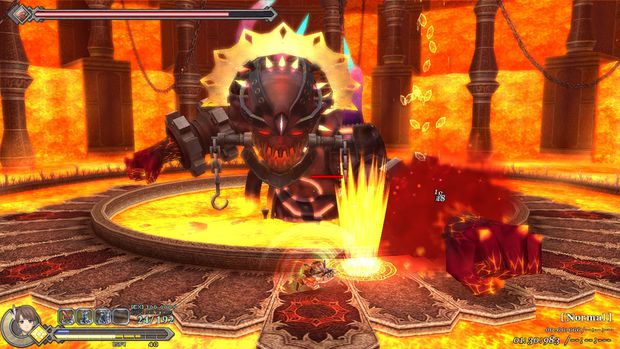 I wasn’t expecting much in the visual department from a six-year-old PC game, especially considering that it’s a top-down action RPG. I’m pleased to say that Ys Origin exceeded expectations in this department. It looks great at standard settings, but if you’ve got the hardware, crank it up and be rewarded. Origin looked great at max settings, with everything on and up as far as it would go, running at 1920 x 1080. It shined with nice textures and clean, sharp-looking environments. If you’ve got a halfway respectable rig, you should easily be able to run this game at high resolution and high framerate, so no worries there. With these settings Origin holds up well against any recently released top-down RPG.

Something I did have high exceptions for was the music, as Falcom rarely disappoints when it comes to their game soundtracks. Origin is packed with strong melodies and driving beats spread across everything from tense battle themes to emotional interludes. The soundtrack is moving when it needs to be, but appropriately moves to rocking when things ramp up. For this game music fan, the musical score alone is worth the price of entry. 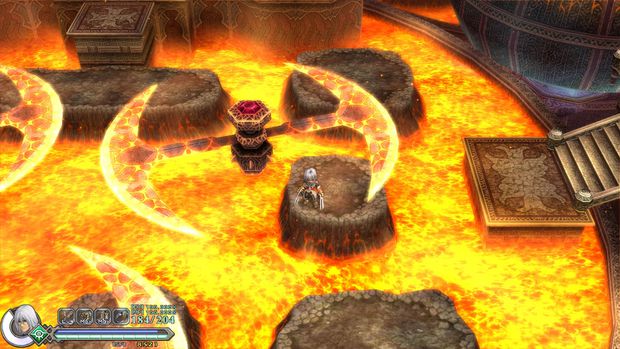 Ys Origin is open to either mouse/keyboard or gamepad play, but I had a much better experience with the latter. While the mouse control and movement is smart and certainly sufficient, platforming sections were better served with the gamepad, which lets you handle things like timed jumps and button combinations a bit easier. For my money, the frantic button mashing that the combat requires felt better using the Xbox 360 controller.

Speaking of money, Ys Origin is a nice bit of game for the price. $20 gets you a thoroughly enjoyable PC RPG that both looks and sounds great, despite its age. You’ll get about 10 hours of entertaining gameplay, really strong narrative (for a Ys game), and a great localization to go with it. Beyond all of this, you’ll also get an unlockable third character and new Steam achievements. Outside of hating action RPGs or not having $20, I can’t think of another reason to pass on this game.