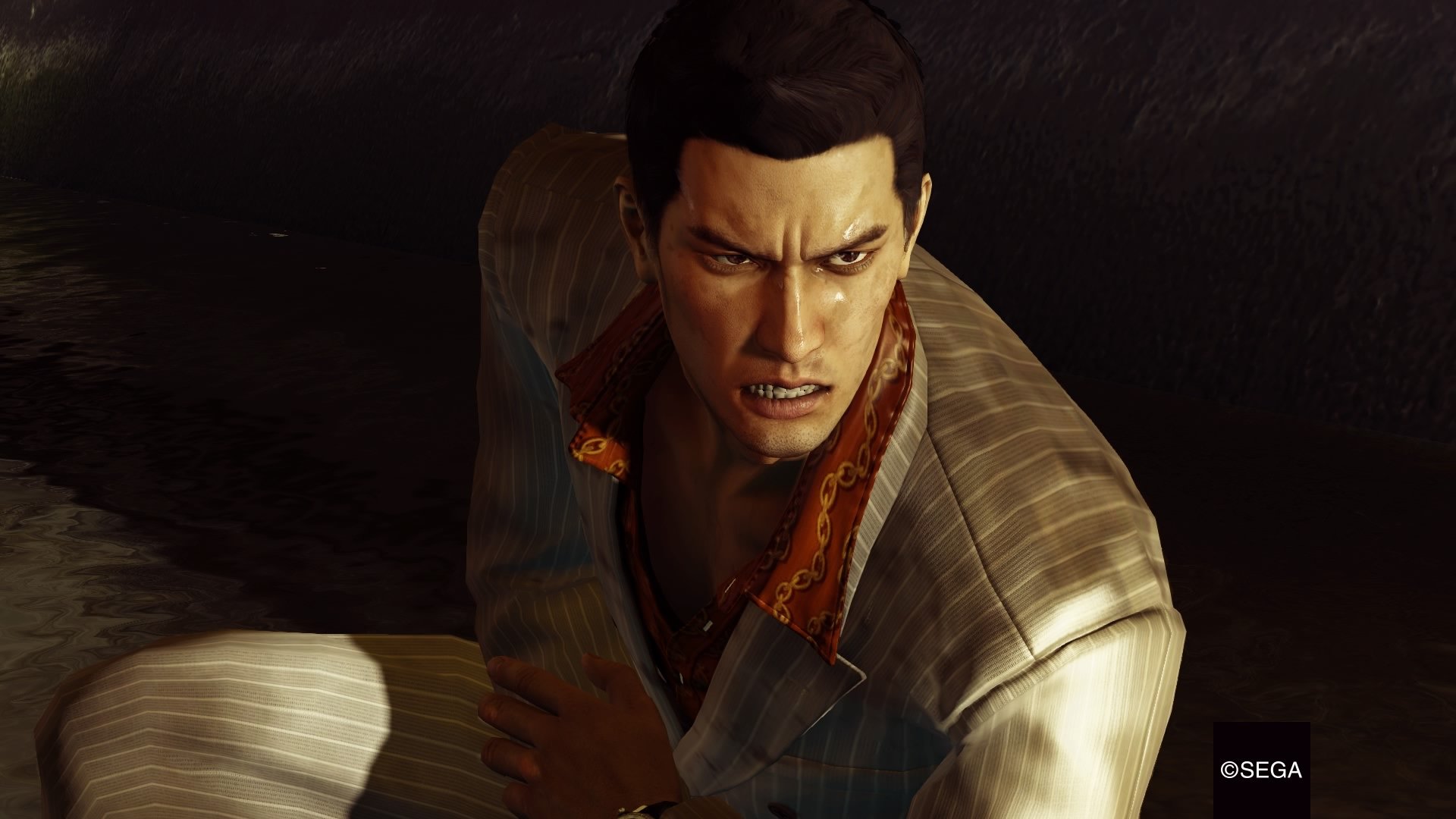 Rise of the Dragon

[Given that Yakuza 0 is out for PC today, we’re bumping the review up.]

Japan in the ’80s was a wonderful time for business owners. The yen was exploding in value and money was flowing like water. If you were involved in any kind of business, legit or not, you were basically so wealthy that you could blow your nose with money. Most people were having a blast and living a carefree lifestyle.

Set during this period of Japan’s history (called the Bubble Economy), the story begins in Tokyo with a young and inexperienced Kiryu Kazuma doing grunt work for the Dojima family of the Tojo Clan. He soon gets mixed up in a false murder accusation and is on the run for his life. 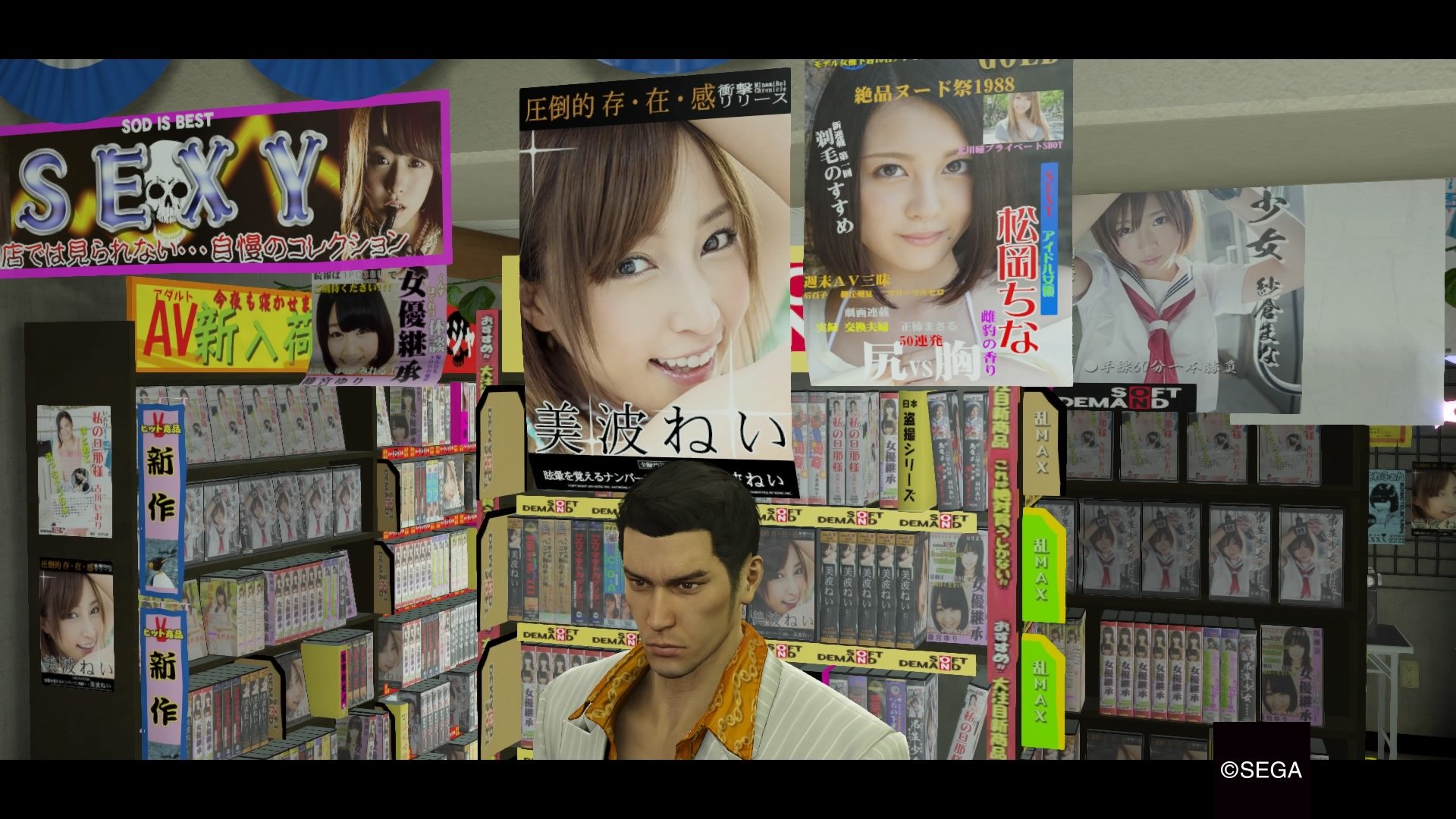 Also making an appearance is Majima Goro, Kiryu’s companion of sorts. We join him in the middle of some personal torment, being bored to death by the town that has become his cage, Sotenbori, Osaka. Assigned the task of murdering a malicious and evil man, Majima’s chance to get back in the good graces of the Shimano family of the Tojo Clan lies on his ability to murder, a line he has yet to cross. Not everything is as straightforward as it may seem and the two are soon thrust into a situation well beyond what they could have ever expected.

Taking a step back from the sprawling epic of Yakuza 5’s hefty cast, Yakuza 0 focuses the plotline on two seemingly disconnected narratives to better build the characters behind them. While there are still the requisite plot twists and kooky bits of melodrama, Yakuza 0 spins a tale that is far more believable and well thought-out then the last two main games. The pacing of the story is also much more balanced; opting to shift between characters every two chapters instead of playing out an entire storyline before segueing into the next. This lets certain story beats become heightened with cliffhangers that then build the drama for some incredible payoffs when you return to that tale.

Those payoffs are definitely worth it, too. One of the greatest aspects of the Yakuza series is that the developers seem to understand the beauty of downtime. Some chapters in 0 are filled with what might seem like pointless diversions, but help to fully flesh out the character you’re controlling. You get to experience Kiryu’s rise in real-estate, Majima’s penchant for managing cabaret clubs and a bunch of ridiculous side-quests before the action boils over into an immense crescendo of violence and fisticuffs.

While I do believe that the action moments of the previous entry, Yakuza 5, were a bit more heightened, nothing about 0 is ever a boring slog. The game feels like a PS2 era classic with modern game design, which makes for an experience that is quite difficult to put down. Even though the story takes around 25 hours to finish, I couldn’t wait to jump right back in and explore all of the secrets and side-quests I had missed.

Now, you might be thinking to yourself that the drop to only two playable characters would make the combat a bit more basic, but you’d be completely wrong. Instead of sticking with a single style for each character, both Kiryu and Majima are given three different fighting stances to toy around with. None of them bear much resemblance to each other or even previous characters in the series.

Majima has a “Thug” style that feels like something out of UFC with a lot of heavy hits and powerful strikes along with a “Slugger” style that utilizes a baseball bat and a “Breaker” style that turns break dancing into violent choreography. Majima is clearly the most unique and his “Breaker” style, in particular, is just loads of fun. Spinning around on the floor with tons of particle effects and limbs flying is just wild to witness.

Kiryu has a “Brawler” style that is clearly a less refined version of his previous move set along with a “Beast” mode to tackle bigger foes and a “Rush” mode. The “Rush” style, in particular, is amazing to toy around with and can even get you out of a jam when your health gets low. Based around a simple form of boxing, you get a lot of quick hits and evasive maneuvers that increase in speed as you build up your “heat” gauge.

The “heat” gauge system has been refined from previous installments, focusing more on multiple levels of build-up that can then be turned into different finishing moves. These are some of the most gloriously absurd displays of violence ever put in a game, with animations that look brutal and would leave the recipient in a hospital for quite a long time. How people can even breathe after receiving some of these punishments is a mystery. 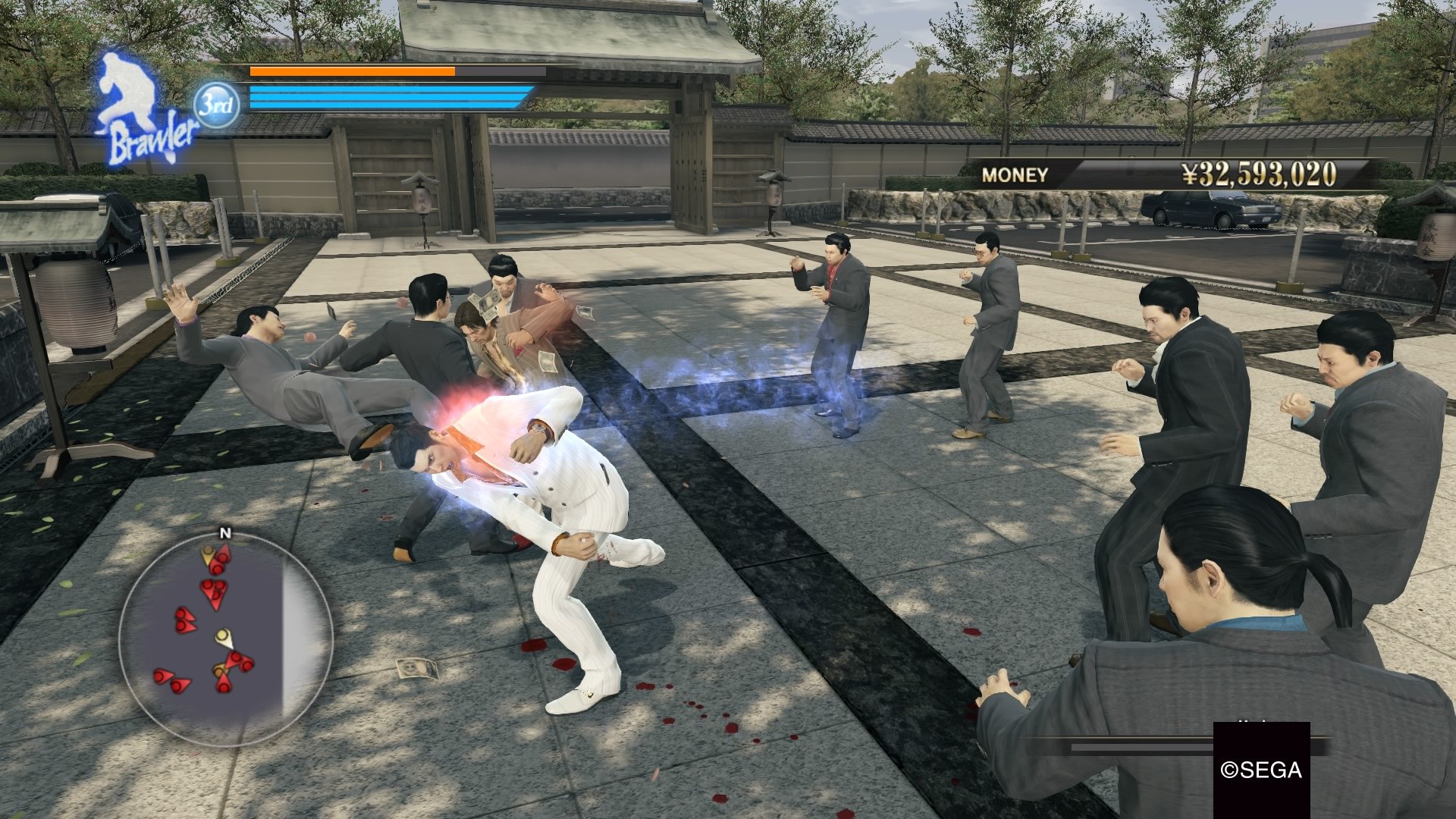 Thankfully, there is less of a focus on these intense special moves. Previous games in the series had built such a bustling repertoire of finishers that keeping track of them required a checklist. Now, though, the game gives you a trade-off of exacting these finishers or increasing your durability and speed in combat. While I love kicking a dude across the face and watching him get airborne, in tougher battles, I need all the speed I can get.

You also no longer acquire experience points from combat. Instead of grinding out battles to cheap out the AI, you have to build your funds to “invest” in yourself and learn new abilities. Maxing out any one particular fight style requires about 15 billion yen, which is definitely a ton of scratch. This shift helps toughen the main storyline while still giving you an option to lessen the difficulty, should you feel the need.

It doesn’t totally overhaul the combat in the game, since you can still pick one style and never change for every encounter, but it does give you different options to screw around with. The game also does provide some opportunities where particular styles are a better fit, which makes it rely more on skill than just leveling up. Even with all these changes, Yakuza still feels like the modern equivalent of Streets of Rage, which should please old-school fans.

Coupled with the well written story, Yakuza 0 is easily a complete game before you even get into all of the finer details. There is so much extra stuff to do that one could basically rip out the main portion and sell it as a separate experience. Heck, upon completing the story, you get to do just that, eschewing all of the crime drama for the simple joys of hitting the local arcade or fishing in the river in Premium Adventure Mode. 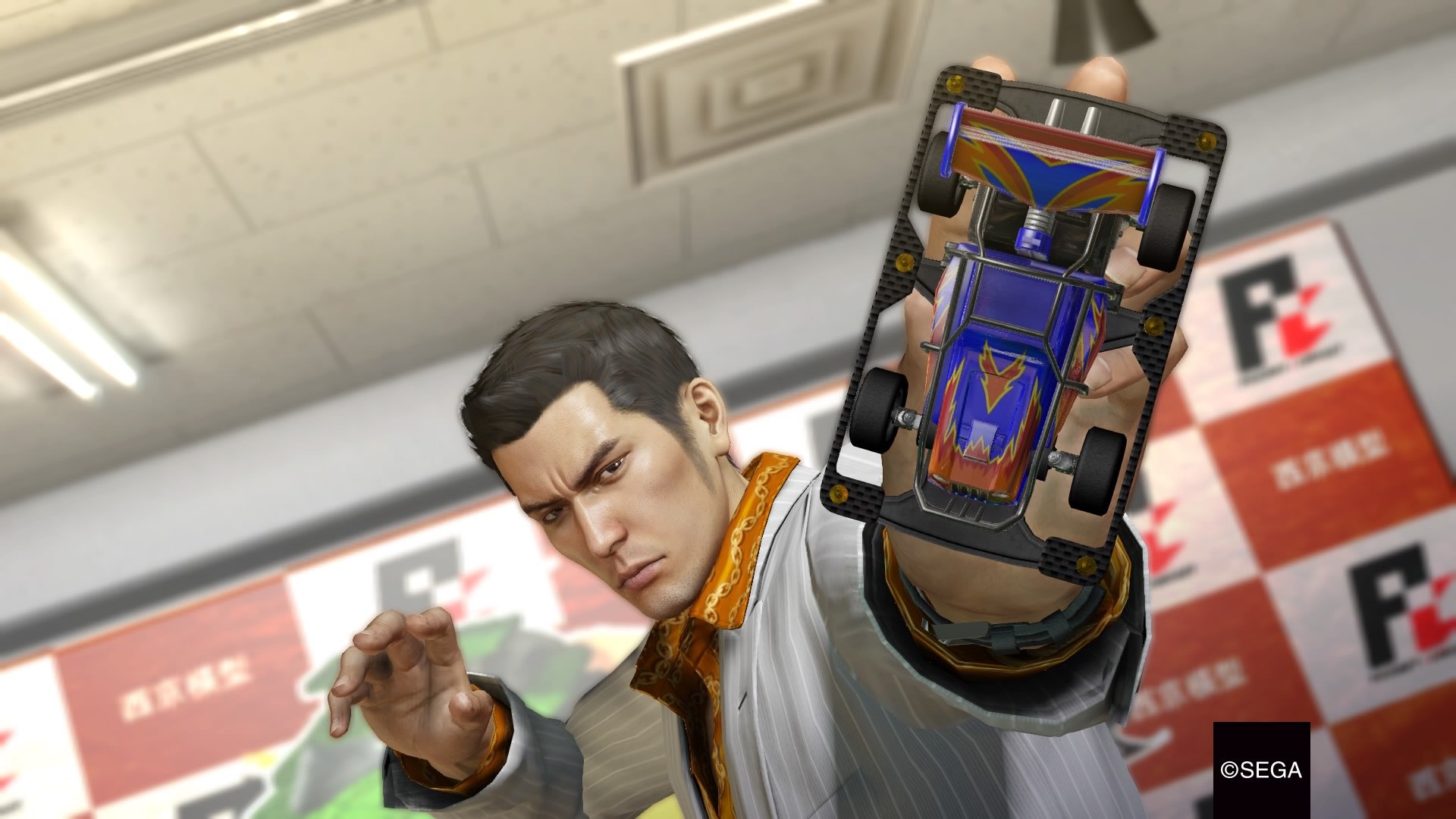 This is where the real beauty of the series comes out. The setting is more of a character than the actual people. Sega has rendered Japan with so much life and detail that you can’t help but get sucked into your surroundings. Street vendors selling food, garbage piling up outside of restaurants, thugs harassing folks in dark alleys; both Tokyo and Osaka feel like living, breathing entities.

That may be due to Kaumrocho being based off of the real version of Tokyo’s red light district, Kabukicho, but the licensing of real-life brands and the attention to detail with street placement and NPC chatter is so astute that I really want to book a flight and head overseas. Everything is rendered so well that you wish the invisible walls blocking you from exploring certain areas would take a hike, because the desire for exploration is high.

While not every area of previous games is present (since this takes place 17 years before the first game), there are differences in geography that will be welcome changes to returning fans. Seeing how the city you’ve grown with over the years was a different beast before is really a sight to behold, especially with all of the neon colors and added fidelity of the PS4. 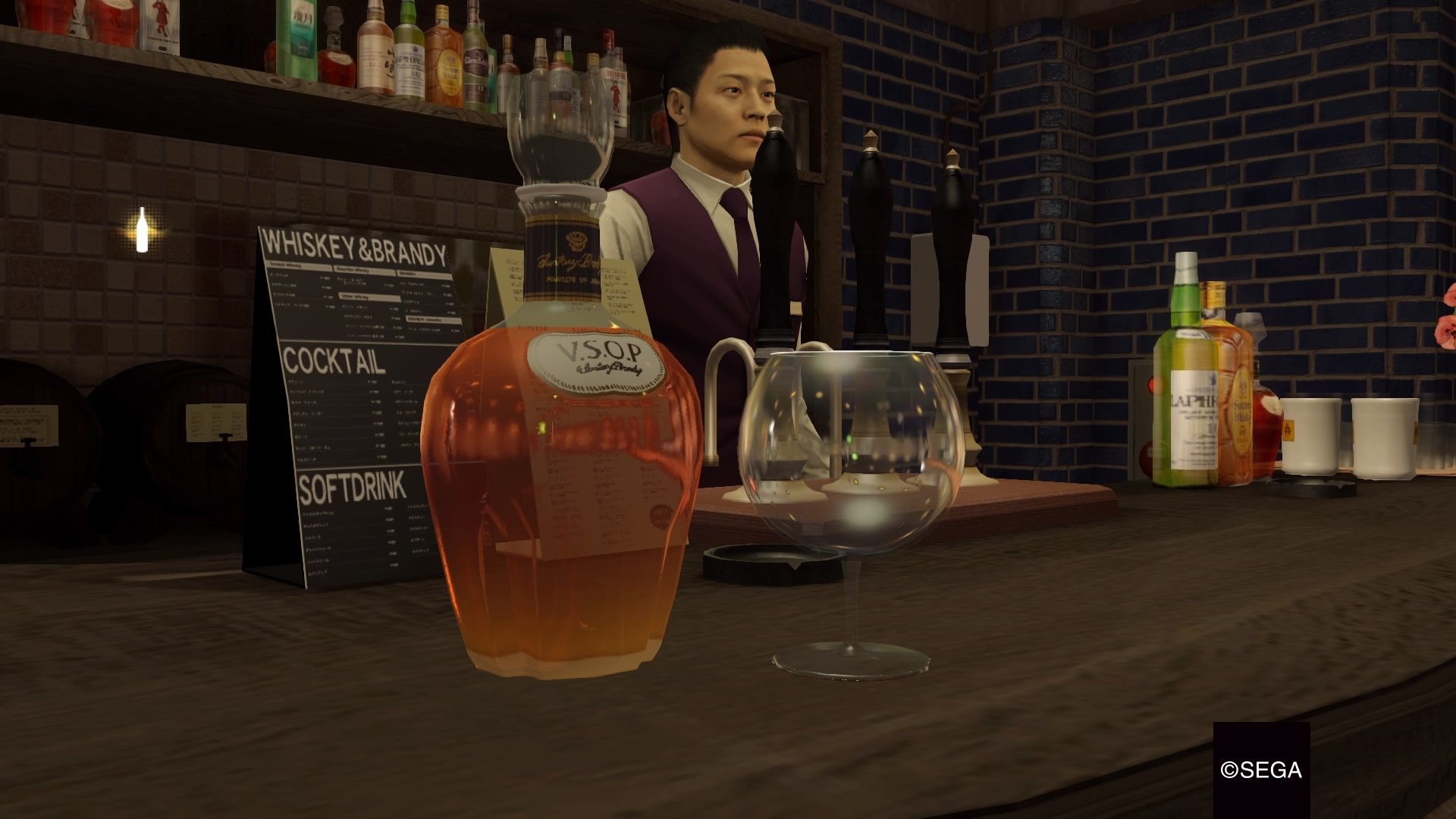 The 1080p presentation really shines for Yakuza 0. There are some framerate issues while exploring the city (and some ugly screen tearing while moving the camera), but the game remains smooth and crisp whenever you’re in the thick of action. I do wish Sega could have put a little bit more polish on this late international port, but none of that ugliness ever crops up during actual gameplay.

Heck, I haven’t even mentioned the extra game modes related to Kiryu and Majima’s main storylines. You’re put in control of a real-estate firm for Kiryu and have to manage some cabaret clubs with Majima. Both feature radically different takes on similar ideas (capturing neighborhoods) and could double as strategy games in their own right.

You get to build up your staff (hostesses for Majima and advisors/security for Kiryu), buy plots of land and invest time/money into seeing them grow to conquer the city you’re in. While they are a bit awkwardly placed in the main narrative, they aren’t necessary by any means. They feel like fully realized ideas, but you can happily ignore them and still get the full experience. The crazy music for customizing hostesses in Majima’s game is too much to pass up, though.

I could probably keep going for hours and hours about the joys I’ve had with Yakuza 0. As of the time of writing, I still haven’t managed to finish all of the substories present. There is also a slot car racing component, an underground coliseum and red-light distractions for those so inclined. Even if all of these modes sucked, Yakuza 0 would be a tremendous game, but basically every component is of high quality. This is because the series was 10 years old when Sega developed the game. They took all of the experience they had gained over the years and provided the definitive version of their Japanese simulator. They also used this chance to flesh out the leading man and fan favorite character to give followers something they hadn’t ever seen.

Yakuza 0 is a stone cold masterpiece. Sure, it has some rough edges and there is probably more content then most people will ever care to see, but it runs well, looks great and provides a dramatic, well written and properly paced story that holds up even for people who have no experience with the series. If you’ve been looking for a chance to dive into this series, you would be hard pressed to find a better entry point. If you’re already a fan, then you’d be stupid to pass up on this game.

It features all of the best aspects of the series with very little of the negatives, making for a game that I’ll probably still be digging through by the time Kiwami releases over here.