You like yakiniku, don’t you? Hell, it’s not worth asking, as I’m convinced that everybody likes yakiniku. Even vegetarians. Yes. I’m telling you now that even if you haven’t tried this Japanese/Korean barbecued meat on a wood charcoal grill, I’m certain you’ll say you love it when you finally do.

Munching on thin, tender, juicy slices of meat, hot off the grill is certainly a good time, but how fun is it to be behind the grill, serving hungry customers? You’ll find out in import PSOne game Yakiniku Bugyou, which is a title now available in the PSOne import section on the PlayStation Network.

Let’s throw this meaty slice on the grill, shall we?

In Yakiniku Bugyou, you’ll work over an in-table barbecue grill from a first-person view, with up to three hungry customers staring at you while you work. The goal of the game is to feed these customers their preferred cuts, cooked to their preferred doneness. Overcook/undercook their meat or send out soggy veggies and they’ll let you know they didn’t like it by yelling out something like “mazui,” which means “gross” or “not good” in Japanese. Do them right and they’ll blurt out a pleasured “oishi!” (“yummy!”) instead.

During this service you’re working against each customer’s satisfaction meter. Feed them something they like and it will go up. Give ’em undercooked pork when they wanted charred beef and that meter will fall. Taking too long to serve food will also see that meter fall. Letting the meter fall too far will cause the customer to leave. You’ll serve these customers in either the game’s standard mode, which has several stages of increasingly picky eaters, or in the game’s endless mode, which has diners constantly coming to fill the seats.

You’ll man a grill that can cook twelve food items. A random indicator to the left of the grill shows the next two food items that are ready to be grilled. You’re free to place them anywhere on the grill, but you’ll have to be mindful of the grill’s hot and cold spots. You’ll also have to keep a close eye on the doneness of the meat, being sure to flip the meat just as it gets color and nice grill marks. Wait too long and you’ll have a black, carbon-y piece of meat. 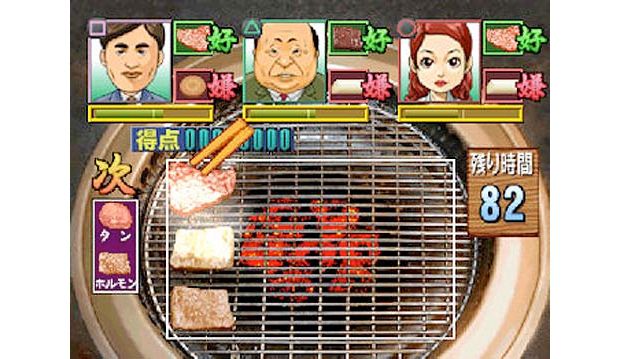 Using the X button lets you place items on the grill, flip them, and even move them to other spots. It also lets you mash at an overcooked piece of meat until it disintegrates, making that spot free for the next piece of meat. The remaining face buttons are assigned to each of the three customers. You’ll only need to select a food item and hit the button that corresponds to the customer to serve them that item.

As with many of the PSOne imports we’ve seen, part of the joy of Yakiniku Bugyou is the novelty factor. The opening menu screen is so serious and so Japanese that you have to laugh. The music is also a bit over-the-top with seriousness, and a bit out of place when you consider that the customers are anime-style drawings. There’s just something funny about frantically throwing cartoon meat on a grill and then quickly throwing it into anime faces that are bitching at you.

Yakiniku Bugyou isn’t the deepest puzzler there is, but it does provide a solid challenge in the later stages. The all-Japanese menus have not been translated, but it will take you all of three minutes to figure them out. And don’t worry about what customers are saying to you as it’s mostly unimportant.

Look, this is probably the only Japanese meat cooking puzzle strategy game series out there. That alone makes it worth your $5.99. I think you’d have to be weird to pass up something so weird.