These bones are made for walkin’

America’s backbone is built from stories shared over campfires. Every road is a vein, snaking and winding across state lines, paved by tall tales and folklore. This land isn’t perfect, but it means something to its inhabitants. The stories they tell are an attempt to make sense of it all.

Where the Water Tastes Like Wine is a narrative-heavy game that explores how stories act as a culture’s connective tissue. It’s rooted in the oral tradition, encouraging players to travel across a patchwork representation of the United States to collect thoughtfully constructed tales. Where the Water Tastes Like Wine knows that simple truths and random events beget modern myths that shape the world around us. It recognizes the power of a good yarn, and that even the most basic tale can make everything seem better, even if it’s just for one night. 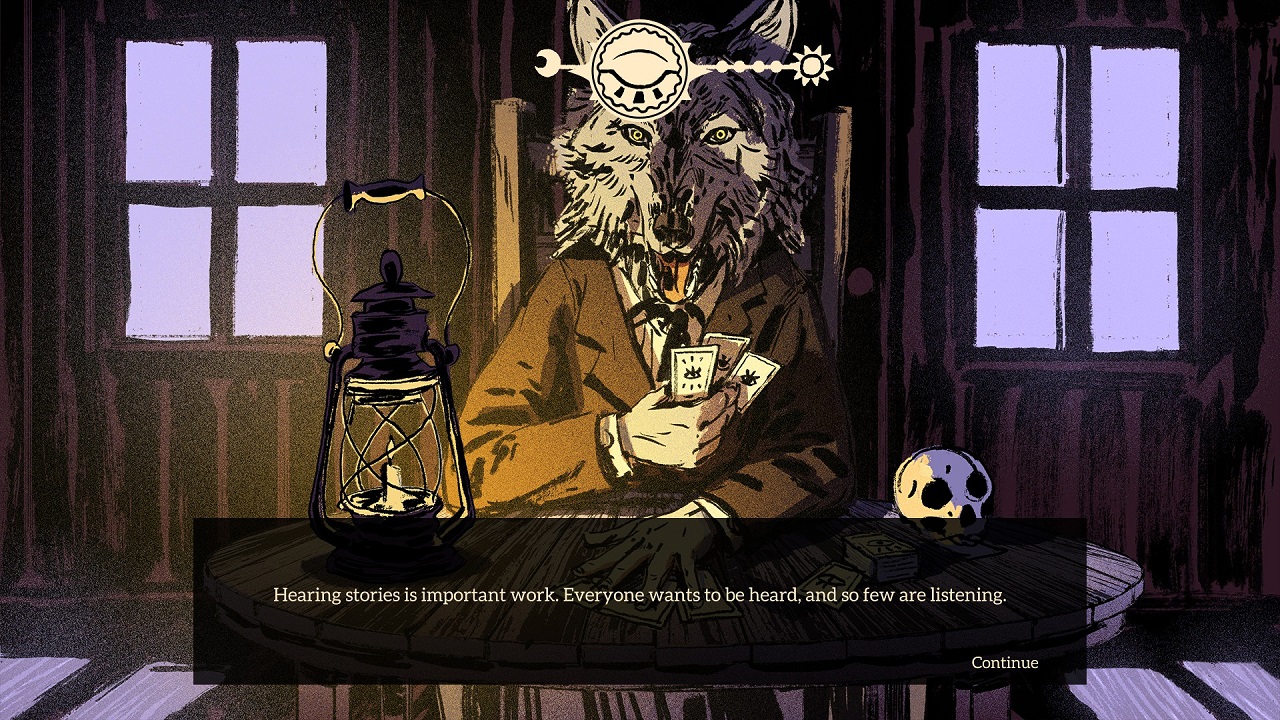 Like so many memorable stories, Where the Water Tastes Like Wine begins with a wager. After stumbling on a poker game in America’s northeastern boundary, players find themselves in the debt of a mysterious character. He doesn’t want money. Instead, you’re tasked with gathering tales from across the country as a means of payment. It’s a monumental task, to wander, but experiencing a digital approximation of the North American landscape and uncovering the stories of its people is more than enough to keep your old bones moving.

For most of the game, players will find themselves traveling in search of bigger and better stories. It’s a road trip of memorable moments and exploration. Players can move about the American expanse however they see fit, be it skipping from city to city on trains, hitchhiking across lonely highways, or just putting one foot in front of the other.

At times, it feels introspective. Where the Water Tastes Like Wine has more than 200 stories to collect. Cities, with their growing populations, often have a handful to collect at one time. In less-settled land, these stories are scattered more loosely, leaving players with more time to ruminate on the task at hand. Folktales have a way of making you look inward, and walks across the desert present ample time for pondering your place in the world and role in the stories you encounter.

But the game comes to life when it’s time to share all that you’ve seen. There are a handful of other travelers camping out all across the map. Upon meeting them, you take turns swapping stories, recounting what you’ve seen as they slowly divulge more of their own experiences. During these interactive sequences—all of which are beautifully illustrated and voiced—you’ll have to try to pick stories they’d like to hear. Sometimes folks are in the mood for a rousing tale of adventure; sometimes they’ll want to hear something genuinely tragic or maybe a story about things that go bump in the night. By telling stories they’re interested in, you’ll be rewarded with their own tale, transforming the person you’re sharing a campfire with into a complex, dynamic character with each encounter.

And it certainly helps that every wanderer you meet is deftly-written. Where the Water Tastes Like Wine features some of the most astounding writing in games. Each vignette and story you encounter is poignant. They paint a complex portrait of the land you’re traversing, showing both its beauty and ugliness evenly. Everyone you meet and every story you collect is a piece of a puzzle that slowly, with each retelling, begins to assemble something that’s both flawed and magical. This land is our land, the game seems to say, and it’s all we have, for better or for worse. 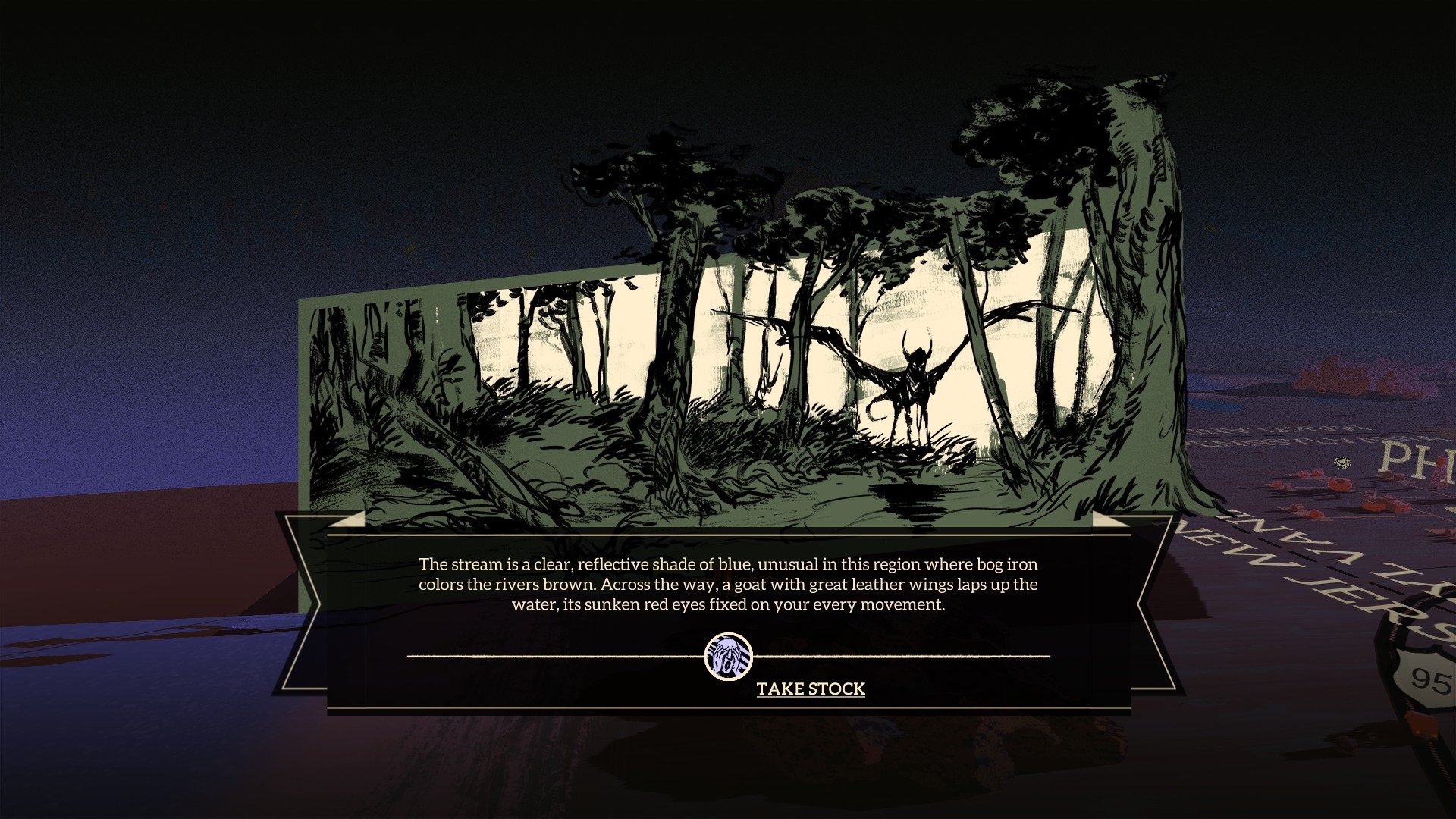 In keeping with the oral tradition, Where the Water Tastes Like Wine also explores how stories grow. The travelers you meet pass stories along, too. As you wander the country, it’s not uncommon to encounter one of your tales in an entirely new form. A simple story about two women who share a love for haunted houses and one another can warp into a folksy tale about a duo cursed with the ability to see the dead after a few retellings. Witnessing how your experiences take on new meaning is exciting stuff, allowing players to contextualize how myths and history are intertwined.

Where the Water Tastes Like Wine is an excellent exploration of stories and the meanings we place upon them. It’s a road trip game through the American landscape that’s punctuated by astounding writing and entertaining encounters. There’s nothing quite like it, and it’s doubtful that there ever will be.

Filed under... #Interactive Fiction#Where the Water Tastes Like Wine