I don’t get to play enough games like Waveform.

For starters, it’s an independent title that doesn’t use 8- or 16-bit graphics and isn’t painfully derivative which, unfortunately, describes much of the stuff I’m willing to shove in front of my eyeballs. Waveform knows what it wants to be and doesn’t stray too far off course.

It’s also not unlike something you’d expect from Bit.Trip series developer Gaijin Games. If that doesn’t get your ears to perk up, I don’t know what will. 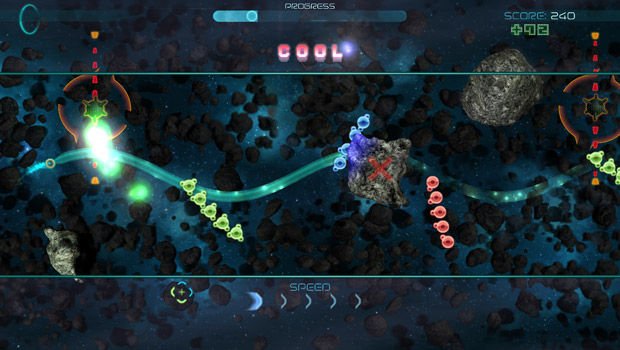 Although Waveform will likely click with you in a matter of seconds, it manages to remain mostly interesting throughout its 100+ levels. Using nothing more than a mouse, you’ll tinker with a wave’s amplitude and wavelength to avoid obstacles and pick up light orbs.

It’s an uncomplicated premise, and the game is better off for it. While grasping the controls on a conceptual level isn’t difficult at all, getting used to the system’s intricacies is another matter entirely. Successfully coming into contact with these orbs and avoiding asteroids, aliens, mines, and more increasingly requires the player to have a mastery of subtle movements that often need to be made hastily.

Knowing what you need to do is only half of the battle; you’ve then got to apply that knowledge to specific situations on the fly (and curse at your monitor for being slightly off target).

The first stage begins with just the basics described above. As you progress to later stages, you’ll come across new mechanics that are nicely spread across the entirety of Waveform, constantly building upon one another and the game’s minimalistic foundation.

Prisms, for instance, can be used to change the color of orbs. This ends up being significant, since rings that account for your score multiplier are specific to one of three colors. Other elements that get introduced later on include mirrors your wave can bounce off of, clouds of gas that either speed you up or slow you down, and — what else? — portals.

As stated above, there are quite a few levels, a number of which could have been consolidated. You can also play through remixed versions of them after completing the main game, but this will likely be overkill for most players outside of leaderboard junkies — as will the endless, randomly generated Deep Space missions. That said, Waveform was largely able to keep my attention until the end. 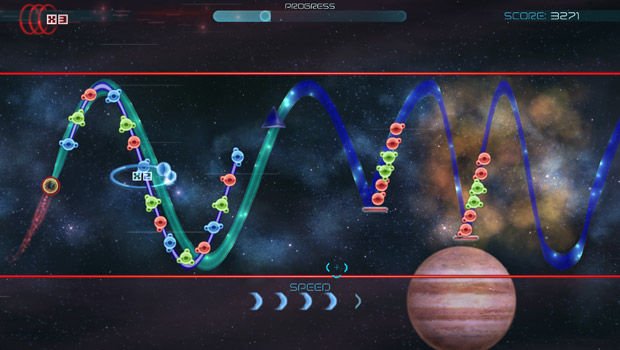 The music is an all-around great fit for the space theme, ranging from more relaxing ambient tracks to downright catchy tunes. Similarly, the art — particularly when seen in motion — was a step above what I was expecting from such a small number of people working on the game.

I particularly like that Waveform speeds up (i.e., gets more difficult) the better you’re playing. Reaching the end of any given level usually doesn’t take a whole lot of effort, but achieving a perfect rating, on the other hand, can be an exercise in frustration; there’s always an orb or two that narrowly escapes.

Thankfully, perfection is not a requirement to unlock additional levels. Generally speaking, an okay-to-good performance most of the time will be sufficient. And, for those who think achievements are useless, they — along with your individual level scores — smartly help you gain access to gated-off courses. 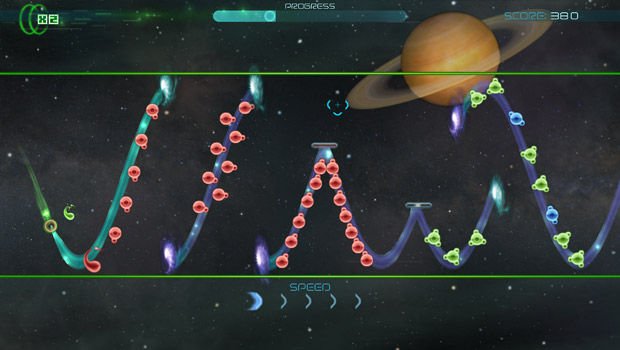 With a game like Waveform, I have to wonder if it would have been better served with more gameplay hooks, or, alternatively, less content overall. I’m inclined to lean toward the latter suggestion as someone who significantly values quality over quantity.

Wave manipulation is a neat concept — one I don’t recall encountering in this form before — but despite admirable attempts to introduce slight tweaks to the formula, it is eventually stretched to its limit. Even still, Waveform is a solid, highly polished game that’s very much its own thing, and very much worth checking out.