Who do you voodoo? Voodoo won’t woo you

With the release of Banjo Kazooie-inspired Yooka Laylee, the upcoming Crash Bandicoot N. Sane Trilogy, and the revival of Psychonauts, 3D platformers are re-emerging in mainstream gaming. Whether this will just be a short-lived nostalgia trip for gaming as a whole or if the genre is here to stay remains to be seen, but a number of re-releases have given us a chance to re-evaluate old classics or even have a first crack at the more niche titles that slipped by us.

Originally an Xbox exclusive released back in 2003, Voodoo Vince never received more than a cult following, failing to garner the widespread acclaim that its peers got. Myself a lifelong fan of 3D platforming collect-a-thons, I was eager for a chance to not only play but review one I missed. Unfortunately, Voodoo Vince fails to make the big-league cut with Psychonauts and Banjo Kazooie, instead faltering to the practice squad among the likes of Croc: Legend of the Gobbos and Blinx: The Time Sweeper. 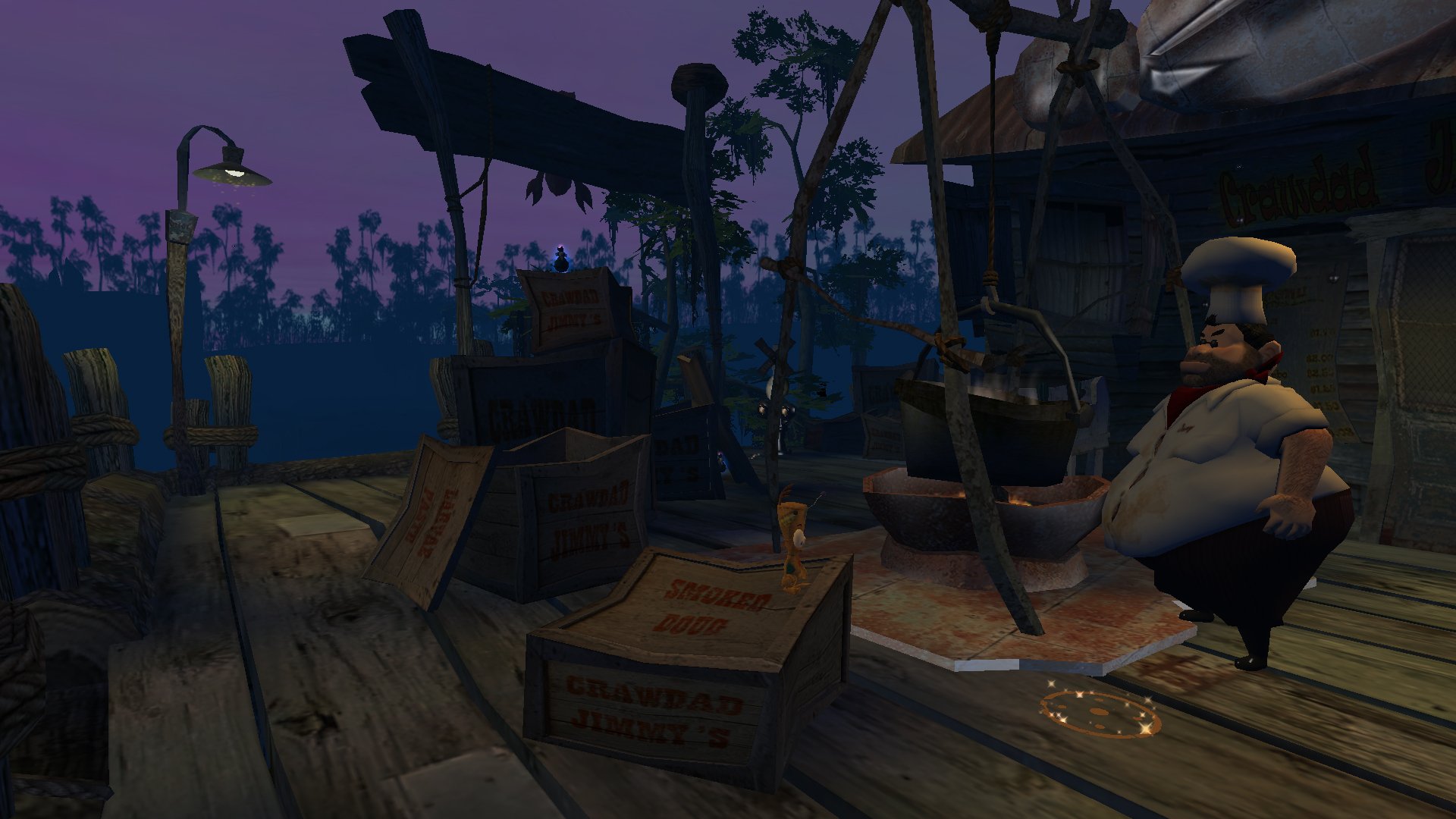 The colorful art, mascot character, and unique premise of using voodoo dolls is an alluring facade that seduces you in, but its charm is left at the door. Or at least I wish it did. The premise and exposition is all rushed in the first three minutes like a dishonest husband trying to change the subject when asked about what he was doing until 3:00am. It goes by so fast I could only reiterate what Vince himself says: “Um…okay.”

Basically, a woman named Madam Charmaine runs a voodoo shop and owns magical Zombie Dust that the main antagonist, Kosmo the Inscrutable, wants and finally manages to steal thanks to his goons. The Zombie Dust isn’t really explained but meant to be understood as a source of power the yet-unseen bad guy wants for no real reason. There is no further plot development until the end of the game, just occasional cutscenes of Vince and Kosmo, who looks like Sheen from Jimmy Neutron, tossing dated and unfunny (even in 2003) insults at each other. Other characters appear in a single level and have no bearing on the overall plot, serving as mere quest givers and targets of Vince’s impotent vocal jabs.

Not all games need to have developing narratives or complex character development, but when it’s as bare as this, there is no foundation on which to establish character traits and from which to deviate from for humorous effect. Psychonauts has a very simple plot and one-note characters, but they are defined enough that their interactions are like that of aluminium and bromine, whereas Voodoo Vince‘s characters react like water and oil. Instead of comedy derived from each characters’ inherent nature, we get surface-level breath insults and literal toilet humor.

The aesthetic of Voodoo Vince is its strongest point, including a fantastic remastering job. Vince himself looks great and he fits in the colorful world quite nicely. Playing this game in 1080p at 60fps sometimes made me forget it was released in the same year as 2 Fast 2 Furious. Most of the enemy designs are bland, but I do like the redneck alligators and the “yiiip” sound they make, even if it perhaps too easy a design.

Considering masterful sound design and thematic music were critical in making games like Super Mario 64 and Banjo Kazooie so engaging, I had higher expectations than I realized for Voodoo Vince. While the voice acting is actually pretty good, you forget about it since the writing and humor are so poor. The soundtrack, however, was unexpectedly dull. When you visit locations like a carnival, a Louisiana swamp, and a haunted house, you would imagine some catchy music would accompany the levels to help sell the atmosphere. Instead the music is royalty-free tier without much variation, at best sounding like it belongs in The Sims. The sounds of attacking and picking up the few collectibles lack that oomph-factor, failing to entice you to collect more like the eggs in Banjo Kazooie do.

So then, with a throwaway plot and average aesthetic, we’re left to rely on the gameplay alone for entertainment. At its core, Voodoo Vince is a 3D platformer with collectibles and puzzle elements. Aside from moving and jumping, you can glide to gain more distance and perform either a slap or spin attack. Pressing both of the triggers will unleash a special voodoo power, which will play a cute animation where Vince injures himself, killing all the enemies in range. Unique actions are all performed in context-sensitive locations. You can collect more voodoo powers for special animations, such as Vince pooping in an outhouse and killing enemies with his stinky green gas, but they are merely different animations that have the same function.

Other collectibles are bottles of Zombie Dust which give you extra health when you collect 100 and Skull Pages which, upon collecting all in a particular level, place a pink skull on the map that you must race to collect and gain extra meter for your voodoo power. On top of mediocre collection sounds, they aren’t placed in thoughtful ways that test your platforming skills, and the skull races are downright annoying.

Beads dropped from regular enemies charge your voodoo powers, but you’ll usually avoid confrontation due to rudimentary and boring combat. Furthermore, voodoo powers don’t harm bosses, so you won’t really need the extra meter. And since most of your deaths will come from falling into bottomless pits rather than from the combat you’ll avoid, you won’t need extra health all that much either. So why collect them? I collected them all in my 100% playthrough of the game, and there is no reward nor even any sort of acknowledgment of your achievement. Collect the new voodoo powers if you’re curious to see different animations, I guess. 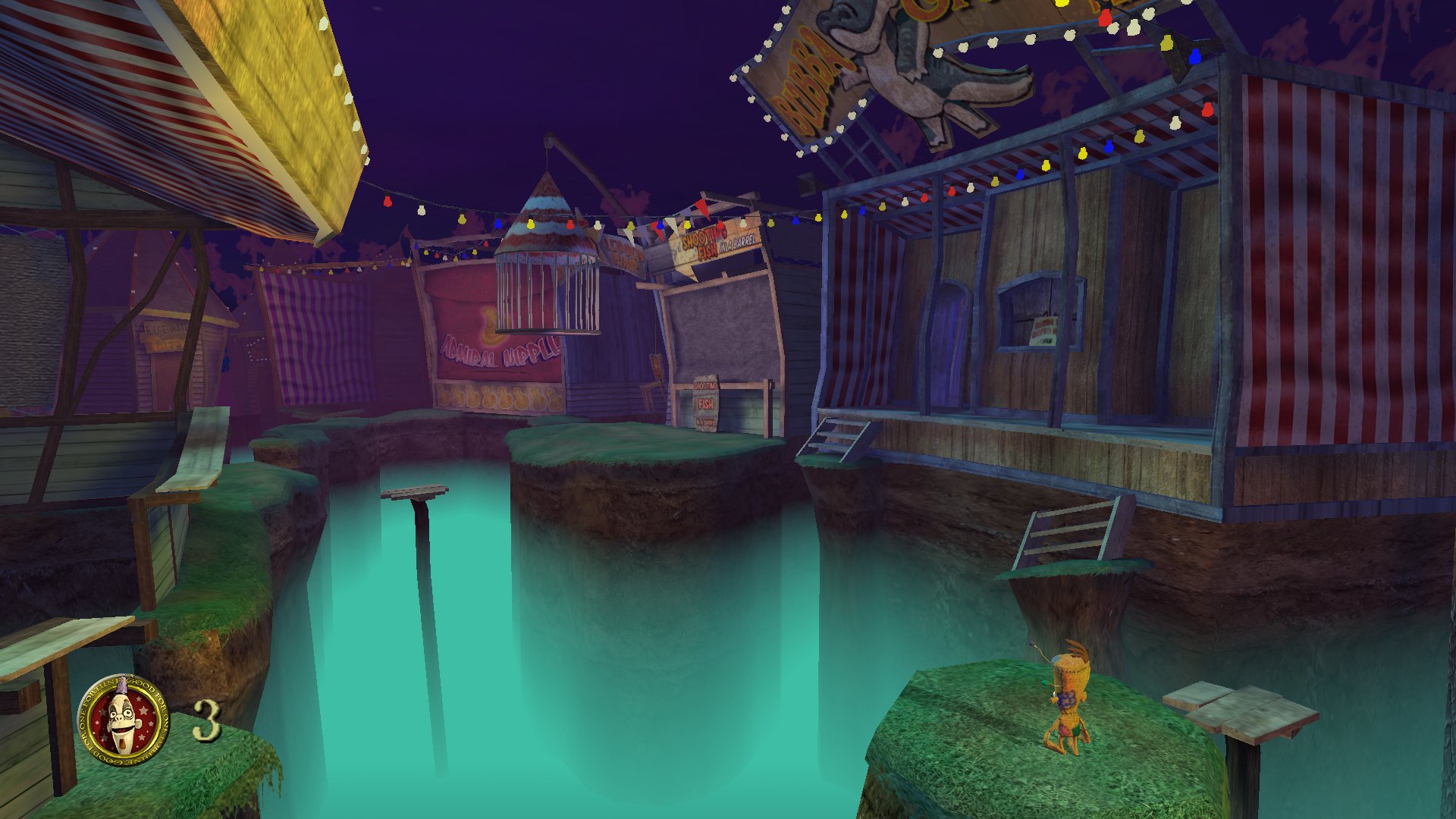 I harp so much on collectibles because they extend an otherwise short game and collecting them is tedious rather than challenging or fun. They distract from the strongest point of the gameplay, the okonomiyaki-style level variety. Nearly each level is unique in its goals and puzzles, which in itself is interesting and makes the whole playthrough moderately enjoyable. The problem is none of the elements are around long enough to develop or compound into interesting mechanics you use through the game. They are over as soon as you understand what they are doing, and not all of them are fun.

In one level early on, you have to carry a fuel tank from the bottom of a tall chamber to the very top, using elevators and avoiding fire, which is as fun as it sounds. Any wrong move makes the tank explode, sending you back to the start or to the halfway point where you can get another. Dropping a pixel of height makes it explode, and even standing too close to the wall on an elevator will cause the tank to clip on the way down and explode. You have to get past fire that spurts out on a timer, a mechanic as old as platformers themselves.

Other levels featuring a plane to fly around obstacles and an on-rails shooter are more entertaining, but their simplicity is nothing to write home about. You’d think some of them would explore the idea of harming Vince as a means to injure enemies, since the makers thought the idea had enough potential to warrant a voodoo doll as a main character, but that element is never used in a puzzle context.

Searching for what made this game get a cult following, I thought perhaps it would be clever boss battles. They are unique in appearance, but in function they are not enthralling encounters. If you believe in the idea of bosses being a test of the abilities you have learned, you’ll be disappointed as you just use basic actions known from the start, since you don’t develop or learn any new skills throughout the game. 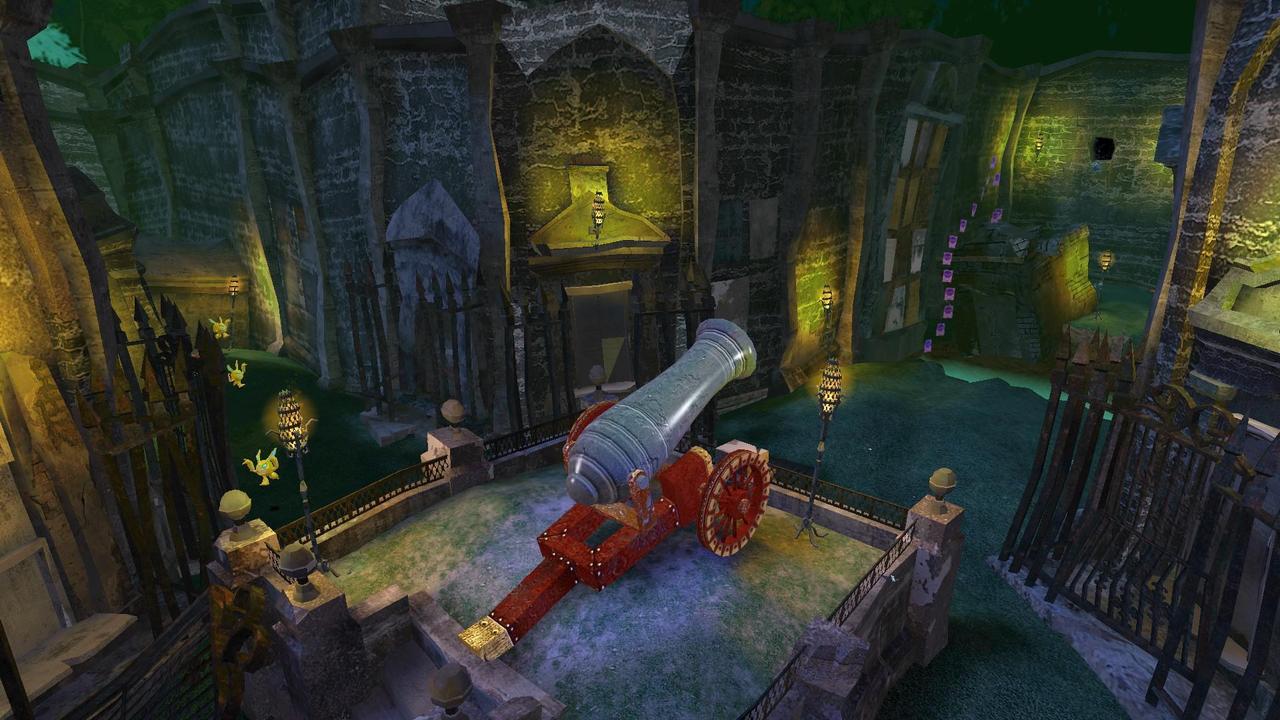 Bosses do not rely on your combat ability and, as previously mentioned, cannot be harmed by voodoo powers. There is one way to attack each, and you perform that same action three times with minimal development. The bosses may walk faster or throw a bit more debris, but that’s it. You clear each by finding a way to harm Vince, using the power of voodoo to transmit that injury to the boss, which you’ll often forget since that idea is not explored elsewhere except in those voodoo power animations. Attacks from the boss hurt Vince, but don’t in-turn hurt the boss, weirdly.

What little puzzle-solving or challenge there may be in the game is often explained away as soon as the level loads. Madam Charmaine narrates the level introduction, laying out exactly what you have to do. Bosses are no exception, where she’ll explain how to win but not the act of harming Vince. Some of the “puzzles” such as shooting Vince at a certain target consume a lot of time if you miss. Others that make you perform the same action multiple times are tedious even if you never mess up, such as a level where you have to platform around the entire circumference of a room to hit a switch at least three times, and then a fourth time to get to the exit just beyond the switch.

With lackluster plot, awful comedy, and shallow gameplay, I just don’t see where the following comes from. Voodoo Vince should be commended for trying to add variety and humor, but ultimately the execution is not there. Perhaps harsh on a game that is no worse than mediocre, I did experience brief nuggets of bliss, but they were rare. More often than not you’ll be frustrated, leading you to believe you’re the real victim when Vince sticks pins into himself.