Water you waiting for?

Puzzle platformers are a bit of a staple of independent games. Since Braid saw critical and commercial success in 2008, the genre has almost become saturated, and while each game may explore its own new ideas in various ways, it has become increasingly difficult to care about them on the level they deserve.

Vessel focuses on fluid dynamics as its central idea. Like any good puzzle platformer should, it constantly does something new with that idea, making for a densely packed game with little filler content. As a physics-based puzzle game, it suffers from a few pitfalls that keep it from being truly great, but Vessel is still a very good game and certainly worth the time and money spent on it. 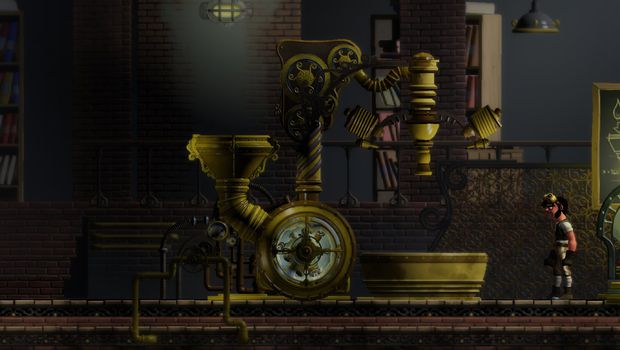 Vessel puts players into the shoes of genius inventor Arkwright, whose creation of Fluros has revolutionized industry. Fluros are machines that animate liquids and can be programmed to perform various tasks. At the story’s inception, these semi-sentient beings have locked Arkwright out of his workshop, and he decides he needs to better control the Fluros before they wreak too much havoc.

A lot of the back story is implied, or gained gradually over the course of the narrative through Arkwright’s own journal entries. It starts simply; stuff is messed up and you have to fix it. However, the uncomplicated setup paves the way for some pretty intellectually taxing puzzles. 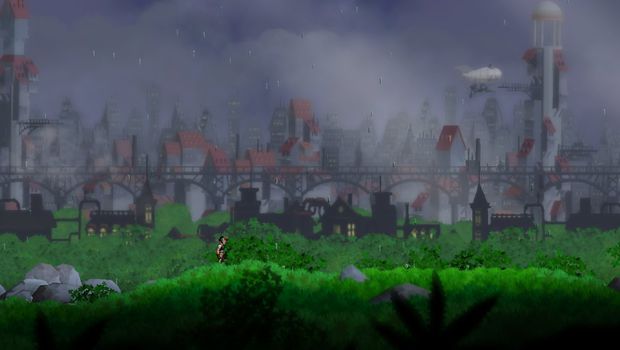 In the beginning, the puzzles involve simple manipulation of water in order to turn turbines, lower bridges, and open doors. Before that gets predictable, the player is introduced to the first type of Fluro, which will incessantly hit switches, usually to Arkwright’s benefit, but sometimes to his chagrin. Shortly after learning how this Fluro functions, Vessel introduces a new type that will chase the player before attempting to pounce on him.

In all, there are five types of Fluros. In addition to the two described above, there are Fluros that seek out more of the liquid that composes them, as well as a pair of Fluros that are either attracted to or repelled from light. Additionally, there are five types of liquids that can be used to build a Fluro. Water is the default, lava will hurt Arkwright and create steam when contacting water, red and blue goo will form an explosive when they contact each other, and green goo is luminescent.

And yes, you can make a light-fearing Fluro out of the glowing green liquid. It will whimper and immediately kill itself, knowing it can’t escape its own light. It’s kind of heartbreaking. 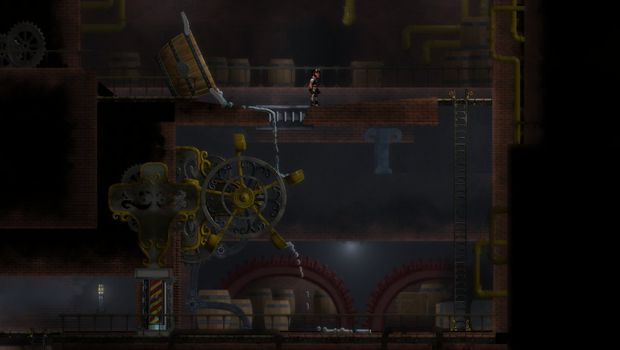 The difficulty curve on the puzzles is pretty spot on. Vessel gradually introduces new mechanics, and constantly builds new experiences to take advantage of those mechanics. Toward the end, there are some particularly tricky puzzles, as the player has a substantial inventory or Fluros and liquids, and figuring out exactly the combination necessary for the task at hand is sometimes frustrating. However frustrating a puzzle may be, it is still satisfying to finally have the epiphany necessary to complete it.

Therein lies one flaw in Vessel, and most other physics-based puzzle games. There are a handful of puzzles in which the solution is apparent, but the execution is finicky. Sometimes the liquids don’t act the way one would expect, and frequently the Fluros themselves behave strangely. There was an instance of a puzzle near the end in which I knew the solution, but the first two tries resulted in the necessary Fluro bumping into something the wrong way and exploding. On my third try, doing nothing conceptually differently than before, I was successful. Sometimes, game physics just break, and it’s irritating when it happens toward the end of a longer puzzle.

Thankfully, Vessel checkpoints frequently. Although the levels do flow together fairly seamlessly, each puzzle is discrete and typically only takes up a screen or two. So while the physics will sometimes create a frustrating situation, the level design and checkpointing save it from being rage-inducing. 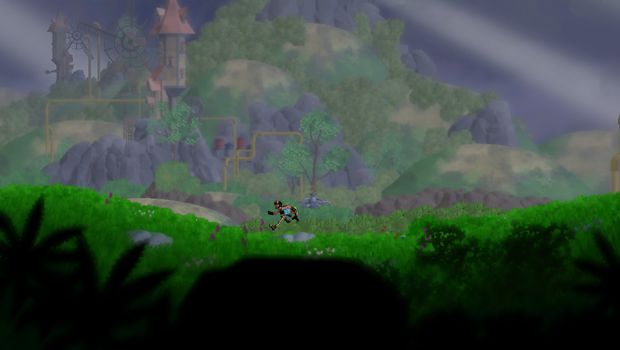 Another element that soothes any potential rage is the world itself. Simply put, it’s beautiful. The fully rendered backgrounds have a simple, clean aesthetic that is visually interesting, but not so much that it distracts from the task at hand. One thing that really impressed me is that the different environments not only look different, but also have a completely different feel. The factory area is cluttered with machinery and puts Arkwright into relatively tight spaces, while the orchard is much more open. It’s a small touch, but the puzzles in the orchard are affected by the extra breathing room, and it adds more than just visual variety.

While the environments offer a visual treat and look fantastic in still images, the animation isn’t quite on the same level. As a fully rendered game that functions on a two-dimensional plane based heavily on physics, Arkwright’s running animation is almost QWOP-esque. It is slightly stiff and unnatural, but against the gorgeous backdrops, it stands out. The animation for the various liquids is also a bit jarring, though not quite as much as the protagonist’s movement.

The music in Vessel is also handled very smartly. The tracks that play in the factory are low and mechanical, while those in the orchard are much brighter and more free flowing. On their own, they are interesting pieces worthy of listening, but Vessel also dynamically builds them depending on what is happening in game. Solving a tough puzzle on its own is enjoyable, and that feeling is amplified when the solution causes a subtle musical transition.

With roughly ten hours of gameplay and little to no filler content, Vessel is a great value. Its main selling point, fluid physics-based mechanics, is also the source of its minor failings. For those not too fatigued with puzzle platformers, it is a solid title oozing with atmosphere and intelligent puzzle design.