Of all the cyber-gin joints…

I’ve always been fascinated by the people on the ground; the jokers working 9-to-5 whose daily lives are often impacted by the Grand Struggles of a protagonist most of them will never meet. Don’t misunderstand, stories told in big cyberpunk games like Deus Ex or Syndicate absolutely have their place. When done right, the tale of the most important day in a person’s life — one that changes the world! — can be tremendously engaging.

Conversely, there’s an argument to be made for the smaller moments in a person’s life. Saving the world is one thing. But when someone takes a big step towards evolving as a person, that can be a story worth experiencing too. We’ve seen it used to great effect in games like Gone Home or Firewatch, but (to my knowledge) a small story told smartly has never been executed quite like this.

VA-11 HALL-A is a story about the curious, often broken people you’d expect to inhabit a dystopian cyberpunk city-state. With the help of alcohol and the atmosphere of a glitchy dive bar, these characters unfold before your very eyes. Although some never quite escape their basic sketch, I left the game knowing more about them than I ever expected. Some of these people would be simple one-offs in a big budget game, but here? Here, thanks to engaging dialogue and vibrant world building, they matter. 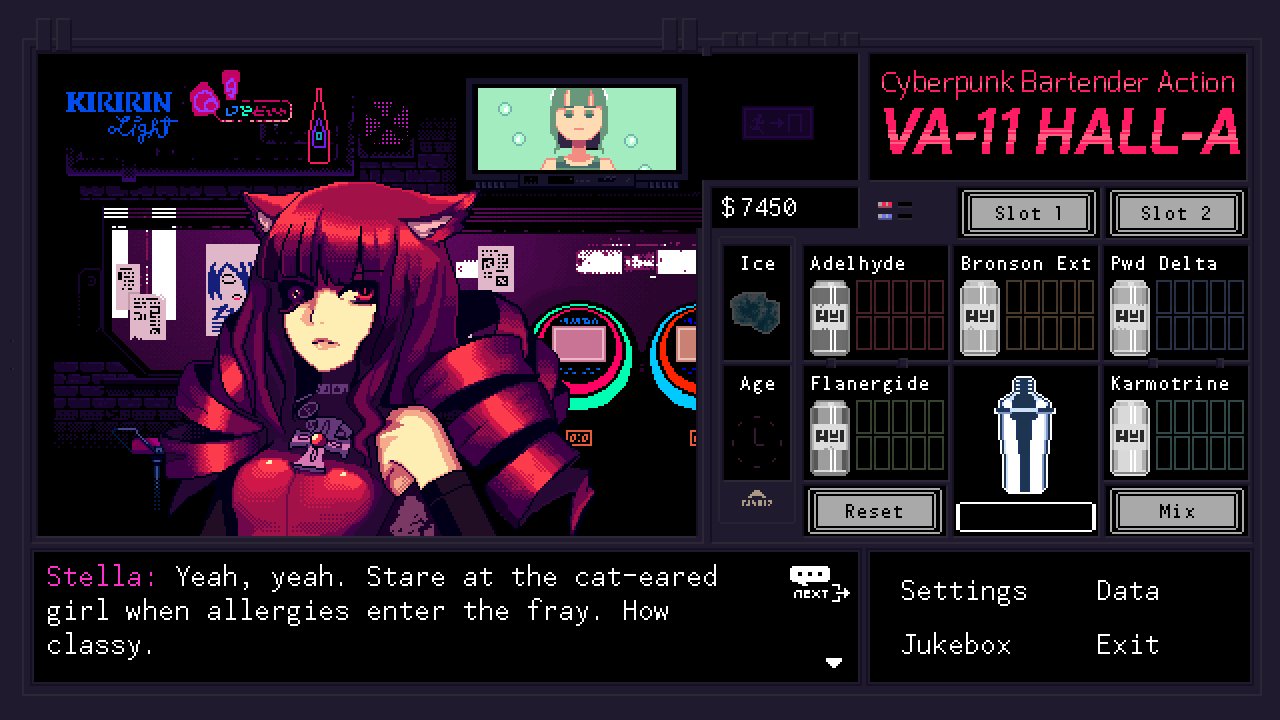 In most cases, the impending threat of layoffs would cause production to spin down as employees sharpen their resume and prepare for the inevitable. Not Jill, though. Jill is the bartender at VA-11 HALL-A, phonetically referred to as “Valhalla” by staff and patrons alike. The megacorp that owns Valhalla is planning to shutter the bar as part of a scheme to deflect attention away from their seedier pursuits. Your job is to keep Jill behind the bar, mixing drinks and changing lives.

Like most of her patrons, she’s got a past that she’s not quite open to discuss. The tales I saw during my time with the game certainly had their fair share of sordid revelation, but nothing so sordid as murder. VA-11 HALL-A isn’t exactly a noir story, you see. It has the vibe of one, but that goes back to the idea of this game existing in the background of a larger tale. Yeah, there’s a private eye who bears a suspicious resemblance to George Costanza, but that’s mostly to set up a Festivus joke later on.

That’s not the only reference I caught. VA-11 HALL-A makes some fairly direct in-jokes, none of which are too intrusive; there’s a biker leader named “Christine Love” after the prolific indie, there’s the aforementioned Seinfeld shout-out, a character wears an outfit straight out of Akira, and there’s a lot of wrestling lines dropped out of context. Also, there’s more than a few Destructoid references, including a classic New Podtoid line & the return of Jim Sterling’s Virgillio Armarndio character.

Thankfully, the game doesn’t lean on quotes from The Rock. It has enough in the way of original jokes and snappy chatter. Even when the jokes don’t necessarily hit, they at least have their own voice. An extended riff on Mega Christmas is particularly enjoyable. There’s also a dog wearing sunglasses and a Hawaiian shirt. His name is Rad Shiba. He’s great. 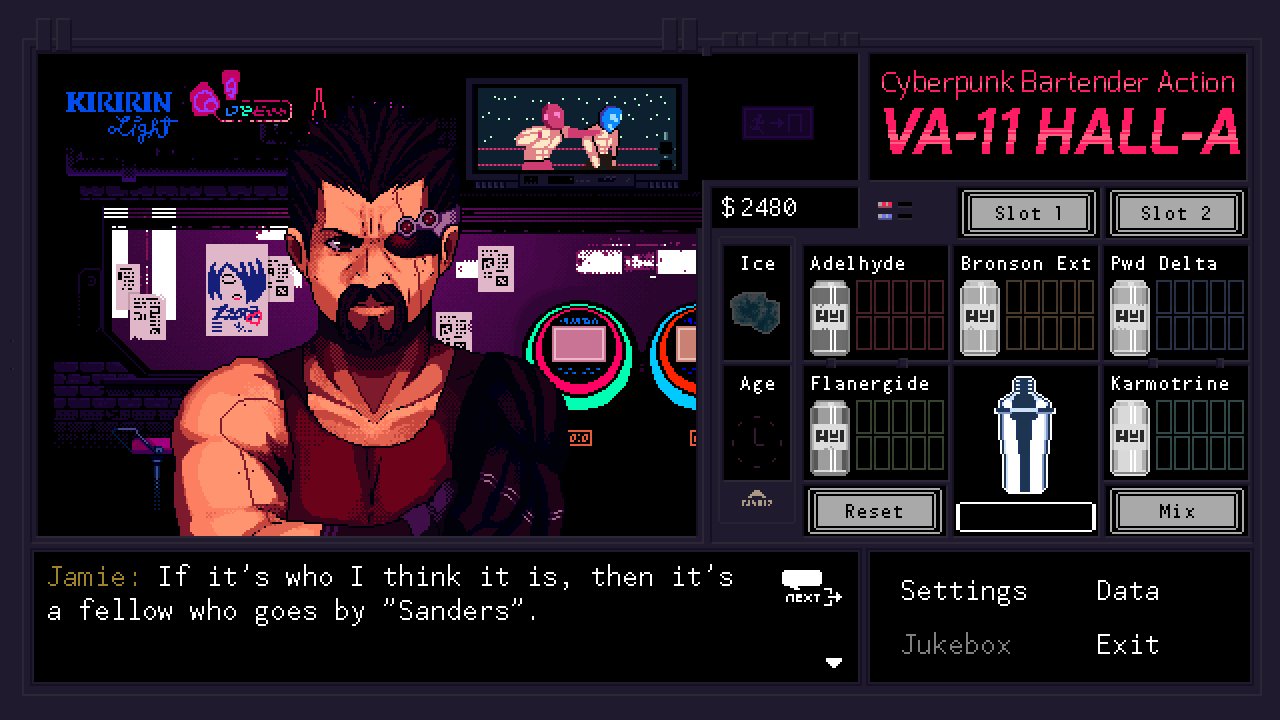 It’s that singularity that makes VA-11 HALL-A’s story so effective. Although this world has your usual cyberpunk trappings, the specificity of your situation makes it feel unique. Folks discuss the nature of artificial intelligence over synthesized beer, all without getting too philosophical. It feels naturalistic, as opposed to explicitly written dialogue. Characters repeat details of their lives in conversations with different people, which is absolutely something I’ve done.

Occasionally, the characters feel like they’re fulfilling a sexual fantasy, like when the girls excitedly talk about bust size. It’s not that I find that subject taboo, it’s that you can practically hear metal grinding as the conversation pivots. Actually, speaking of taboo, the game does give off a weird father/daughter vibe. There’s the guy who hires a sex worker to pretend to be his daughter or the hacker who celebrated her 21st birthday by pretending she was dating her father. The first example is an outlier; a character proving their depravity. The second, however, I can’t quite puzzle out. It’s just really off-putting.

In a world that feels this intimate, maybe details like that are excusable. Some of your regulars know each other, whether they’re aware of it or not. It’s not to the point where everyone is connected, but they all live in the same city and are affected by the same events. Some characters may have close ties to the escalating bank situation, whereas others may simply comment on the matter. It’s fun to have the whole picture laid out in your head, especially towards the end of the game. 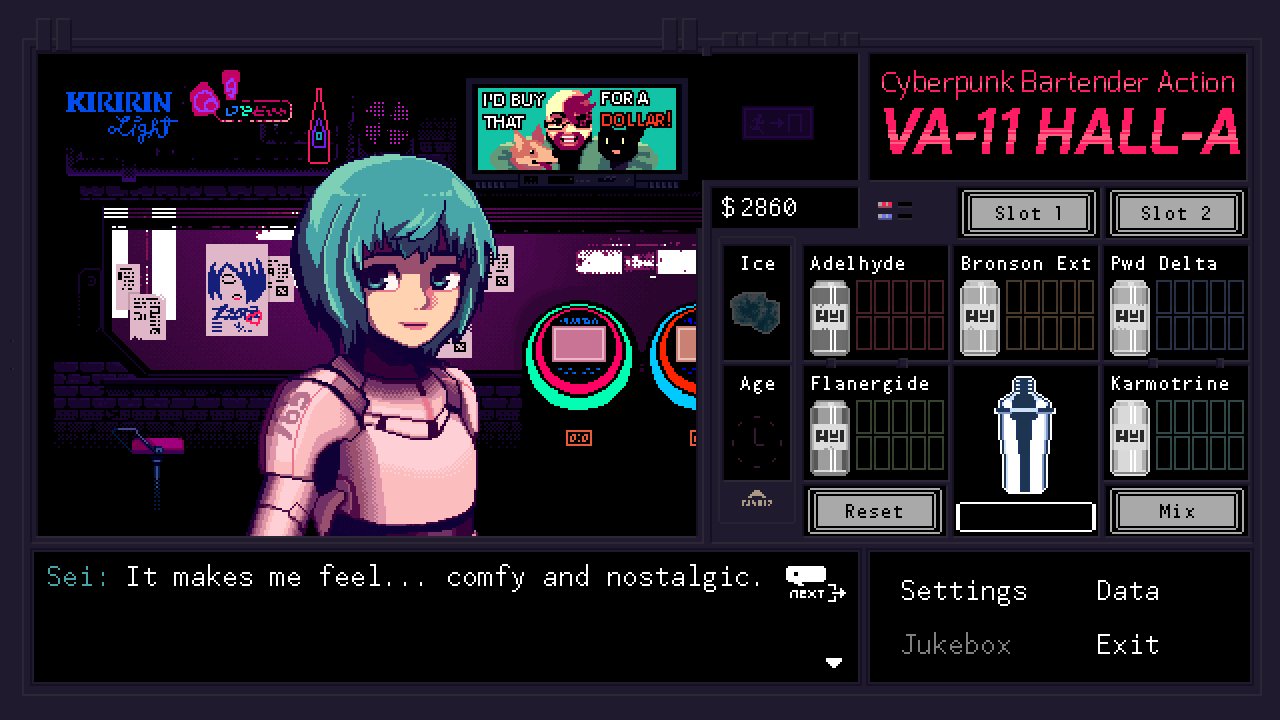 You’ll spend most of your time with VA-11 HALL-A mixing drinks according to a book of recipes. The instructions are simple, but the game will occasionally throw curveballs your way. If Jill becomes distracted for any reason, she’ll forget orders as soon as the book pops up. Patrons will also deliver vague instructions, but you’ll be able to figure them out if you’re paying attention. Keeping notes helps too, believe it or not. You’ll want to remember usual orders, since a few of them are complicated.

The longer I spent making drinks, the more comfortable I became with the terminology. I never quite memorized a particular cocktail recipe, but I was throwing all kinds of future liquids into shakers like a pro by the time the credits rolled. I felt like I was as good of a bartender as Jill’s customers said she was.

That connection between protagonist and player is something rarely seen in straightforward visual novels. Jill’s level of interest in a character often matched my own. I don’t know if that’s a system working behind the scenes (player gives this person big drinks and lots of alcohol, so have them talk more?), but it worked for me one way or the other. Jill even gets her own personal narrative, which I found compelling. And, to be honest, relatable. I feel guilt very intensely, and Jill’s grieving process occasionally mirrored my own. 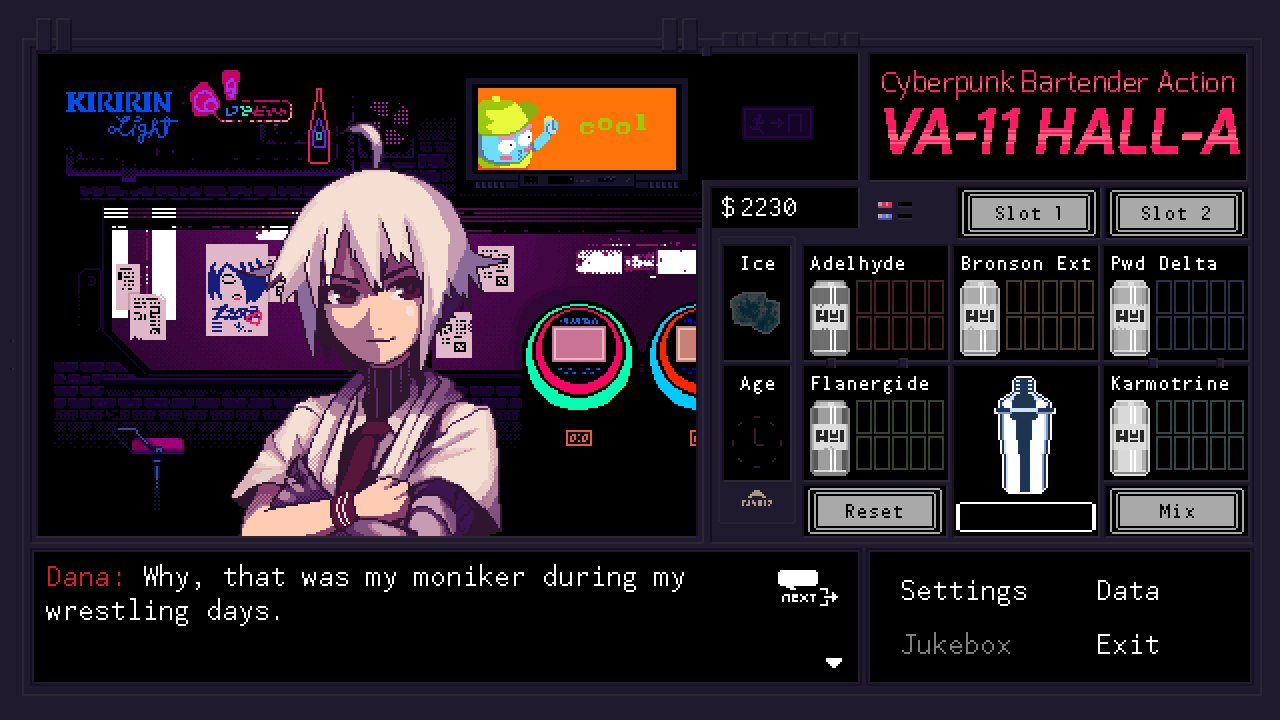 The game’s choice mechanics verge on invisible, which is impressive for a game with branching paths and multiple endings. Even now, I can only guess how I ended at the conclusion I received. I mean, I know why I got the “bad” ending, that makes total sense. But apparently there are whole characters who just never showed up in the bar. It’s all about the drinks you serve and how you serve them, I suppose. Just like real life.

When you play VA-11 HALL-A, you’re gonna do a lot of clicking and a lot of reading. This is a visual novel game with some very light bartending elements, but to pigeonhole this game by defining it as what you “do” would be a disservice to its superb aesthetic elements. Each character feels extremely well-defined, including Jill. As the credits rolled, I had not accomplished much of anything for the population of this dystopian city-state, but I’d helped out a few pals and made some changes of my own. For me, that was all I needed. (I guess this game’s closer to a full-on noir tale than I originally thought)

If you don’t like visual novels or more intimate stories, will you like VA-11 HALL-A? I think so, yeah. I honestly believe there is a game in every genre for everyone, so you should give it a shot. VA-11 HALL-A is a damn fine video game, and that’s the bottom line.

[This review is based on a retail build of the game provided by the publisher. References to various organizations, including Destructoid are present, but no relationships were factored into this review.]