At first glance Unravel feels akin to LittleBigPlanet with its adorably miniature yarn-clad mascot, but don’t let it fool you. It’s a heartfelt story with little communication beyond imprinted memories, woven with delightful yarn puzzles.

In a time when games are typically transporting us to other realms and fictions, this one takes us back home where we belong. Based in the breathtaking natural settings of Sweden, Unravel delivers a heartfelt story and on a journey filled with love, comfort, and struggle. 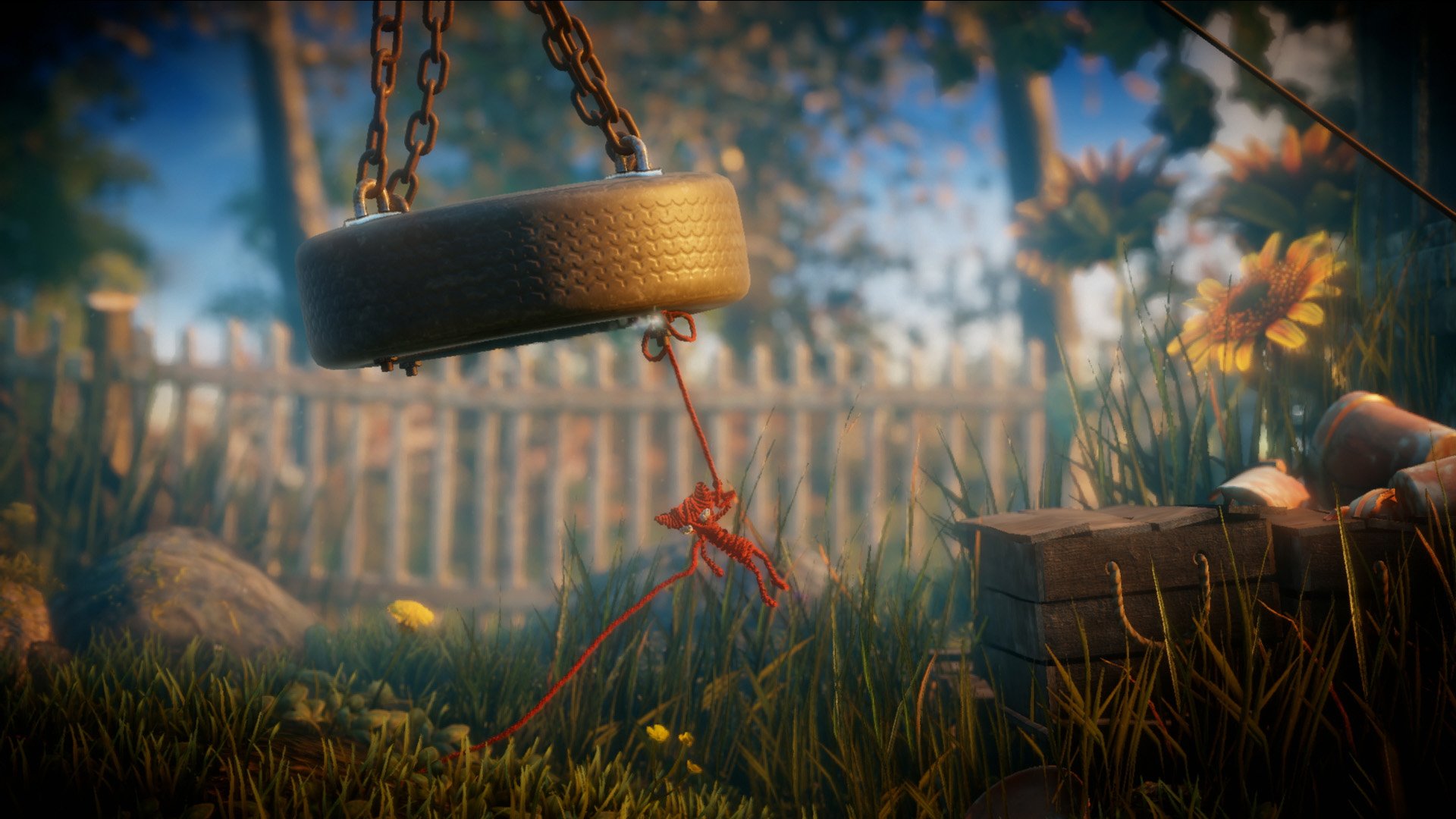 Unravel’s story begins with an elderly woman making her way up to bed as Yarny, the game’s darling protagonist made from red yarn, comes to life downstairs. His adventure begins just outside of the cottage, roaming through the garden and into the beyond in search of lost memories made by the family that once inhabited the house, unraveling himself along the way.

Yarny is able to roam freely throughout the cottage, a landing area for the ten chapters in the game which are accessed through framed pictures. Each photo transports our hero to the area it was taken where he encounters fragments of lost family memories, pictures frozen in time. At the end of each chapter he places the memories into a photo album that starts to come to life, weaving pictures into a story.

To capture all the memories you guide Yarny through various terrain and strategize on how to make it past obstacles without unraveling him too much, as he only has limited amounts of yarn before reaching another spool. At first the game throws a lot of yarn techniques and mechanics at you quickly, but with time they start to become second nature. Coming up with clever solutions using environmental props along with grappling, swinging, climbing, rappelling, and tying knots for points of resistance are key to making it through. The yarn puzzles are fairly easy to figure out without being too simple — each task is fairly small and broken up, not requiring long chains of thought but at the same time being challenging enough to feel rewarded when making it through.

There were a few areas I was stuck on for longer than I’d like, but for the most part I found them to be fun and clever. Surprisingly, the levels never felt repetitive and the game was kept fresh by experimenting with the yarn’s mechanics in new environments. Outside influences also give a bit of flavor, requiring additional thought behind the puzzles — for example, landslides, animal chases, and active machinery all play additional parts to the game beyond the yarn. 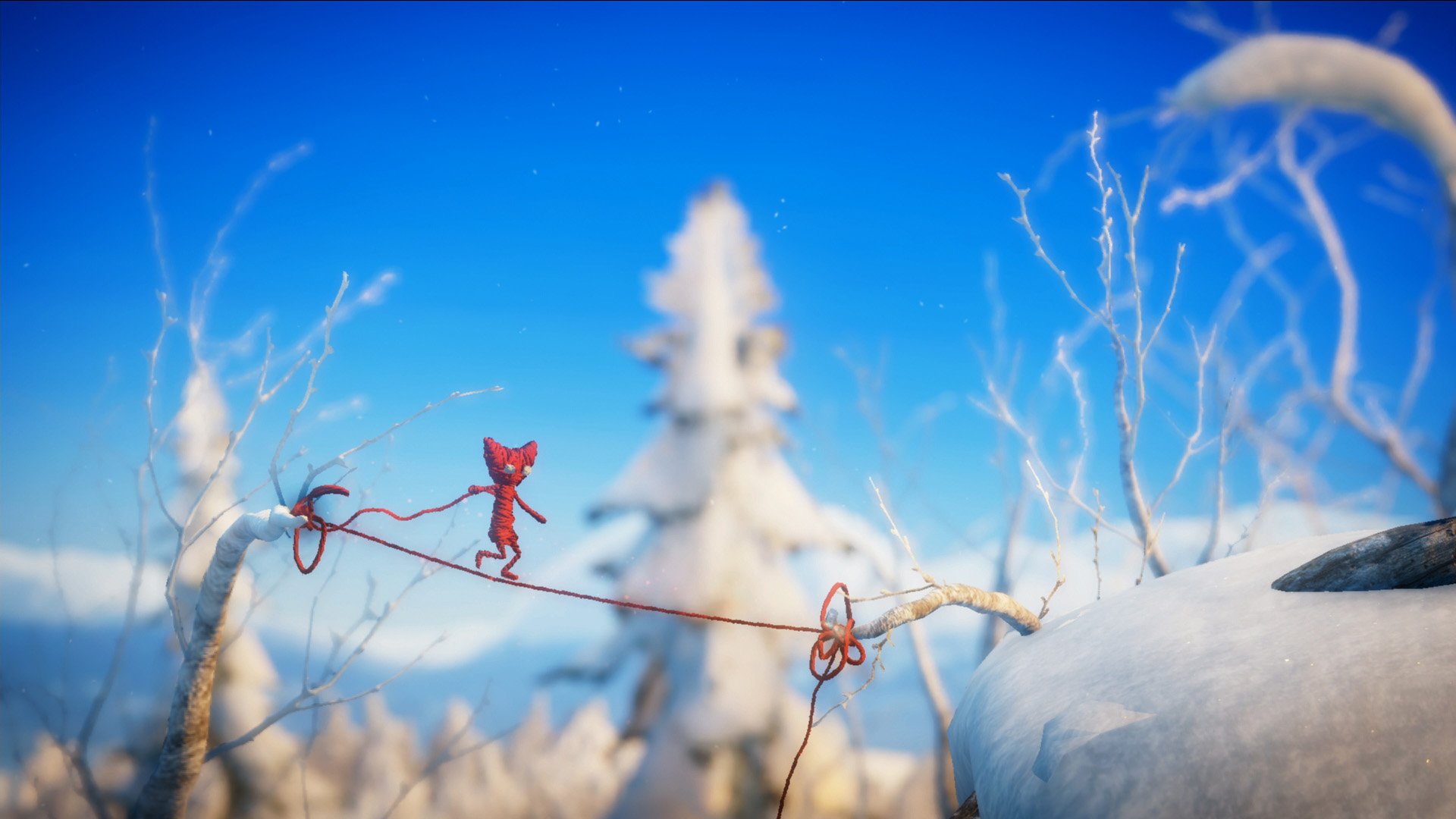 Because the yarn is finite and will stop unraveling if you use too much, being cautious with solutions is critical to making it past obstacles. Yarny will get visibly distressed and emaciated if you pull too far away — but don’t worry, you won’t kill him, he just won’t stretch any farther. If you find yourself in a particular bind (literal or no) you are able to reset back to the last save point by holding the down button. This is an extremely useful and necessary feature as it is quite possible to accidentally get yourself in an unsolvable situation. Spools act as save points along with providing the additional thread, and are fairly regular throughout the levels, however there are some small stretches that can wear thin if you’re not careful and make too many mistakes.

Unravel as a whole is a whimsical and endearing adventure, pulling you further into the atmosphere through the intricate textures and bright effects. In one of my favorite levels you make your way through a snowy farm, rolling pine cones to make snowballs. The environment was so realistically captured and joyful that I felt I was right there with Yarny rolling around in the snow. Textures and light within the environment are slightly exaggerated, but in that magical way that makes fond memories stand out brighter. Everything from a log to a puddle comes to life beyond what’s contained in reality, almost like watching the most beautiful sceneries replay in your head. 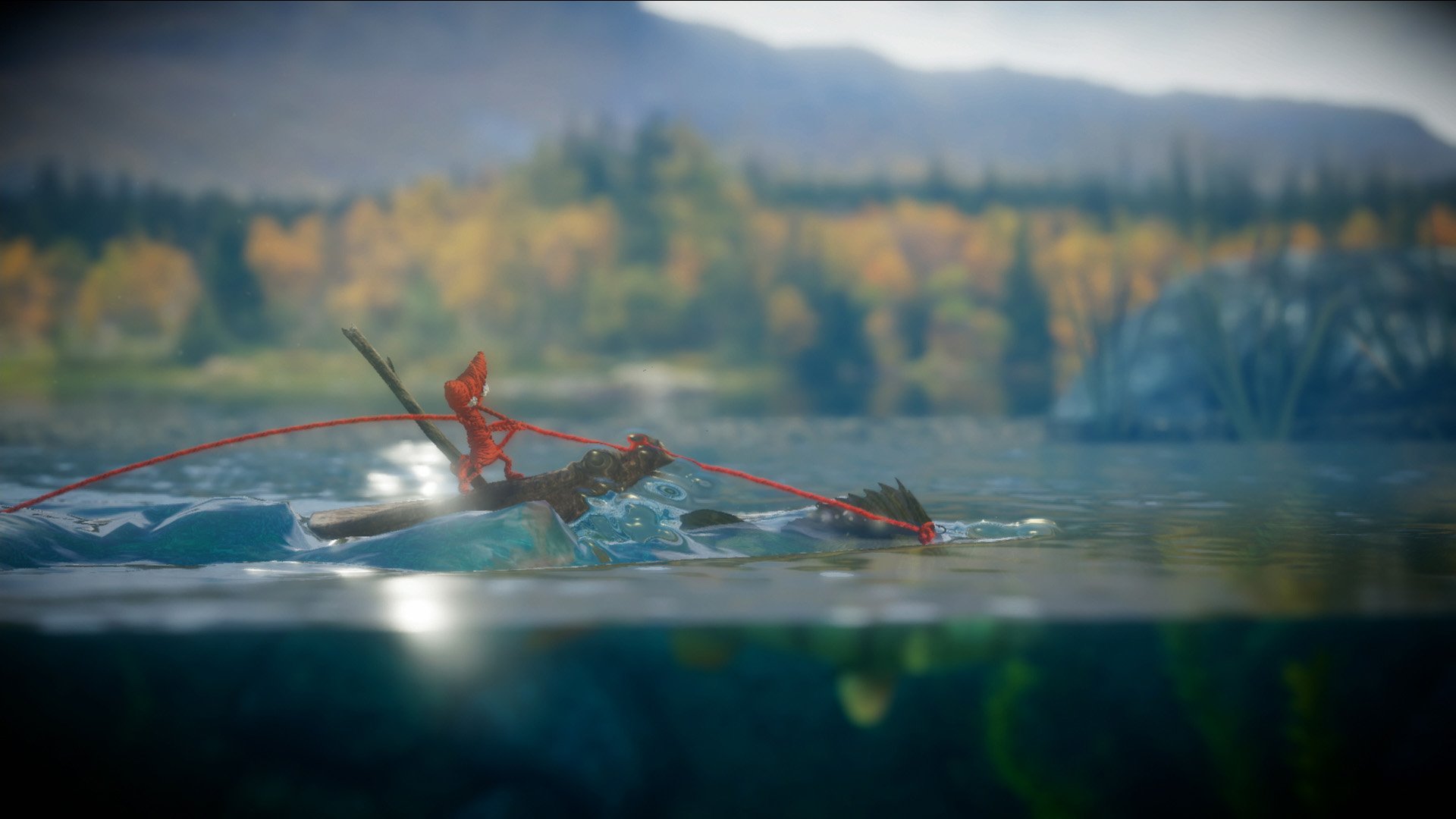 There’s a certain sadness to the experience that I can’t quite explain, perhaps lost nostalgia and a lingering familial longing that tugs at the heartstrings. It’s not necessarily “sad” or depressing in the traditional sense, but a thoughtful tale that brings forth various emotions throughout that will vary depending on the player’s personal history and connection to the story. These emotions are certainly drawn out even further by the sepia tones and lovely violin accompaniment, along with the self-discovering nature of the game.

Unravel cherishes the best moments in life while recognizing the hard battles we sometimes face as families, all wrapped up within delightful gameplay and stunning scenery. The atmosphere is so compelling that I couldn’t help but feel like a piece of my own story was wrapped up in the game with the rest of the photo album. It’s rare but a special thing when a game manages to impart a story that touches strings deep in the heart, and Unravel manages to meet and exceed this feat. Get ready to have all the feels.