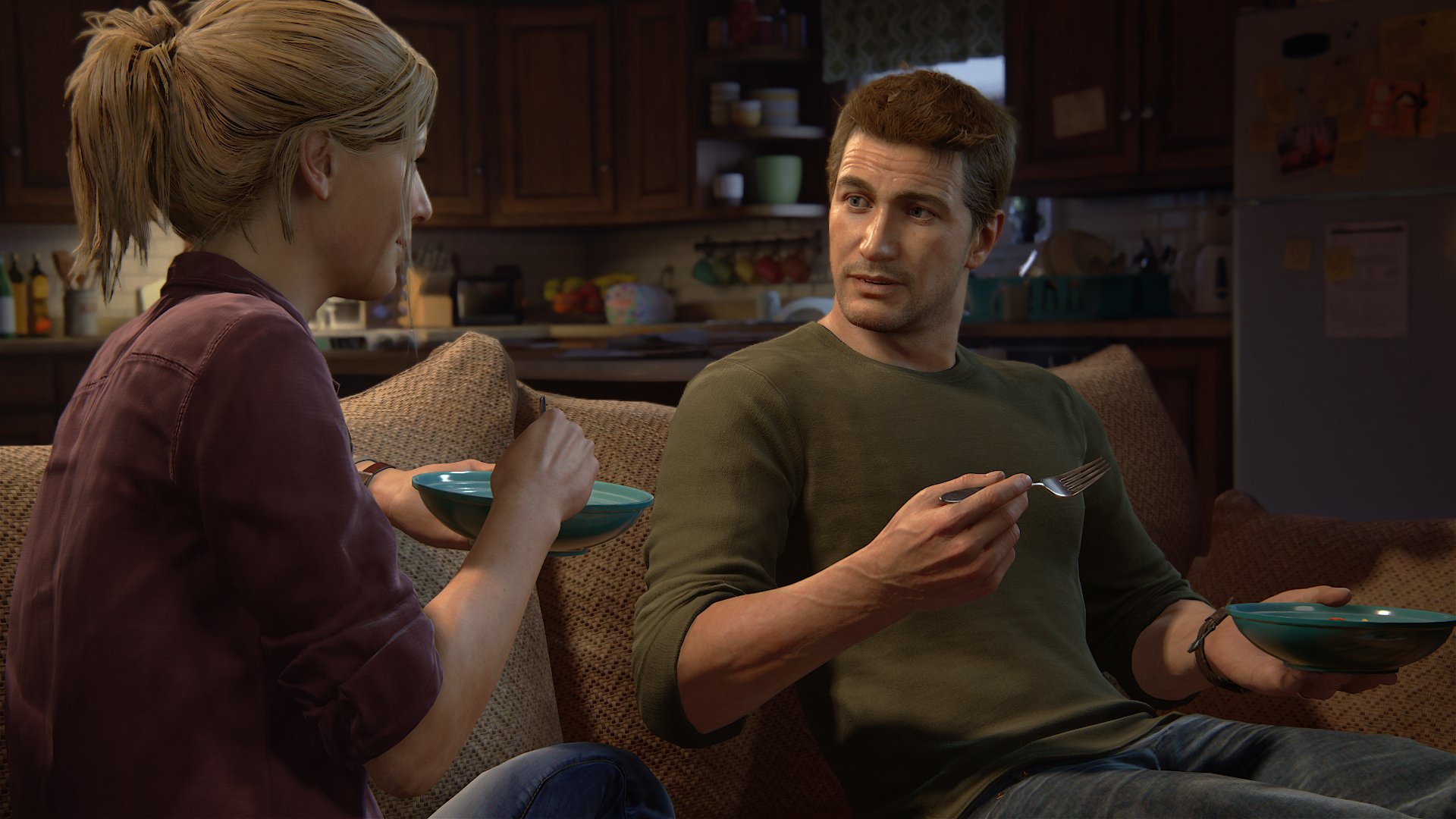 Nathan Drake has a brother. That is the plot device that sets Uncharted 4: A Thief’s End into motion. The once orphaned and alone boy Drake who sought a father figure in Victor Sullivan and, after three adventures, settled into a life of domesticity with Elena Fisher, has more family than we knew. And more than he knew, as Sam Drake, a ghost of Nate’s past, comes back into his life after 15 years of absence.

It’s a pretty big plot point on which to hinge a fourth, rider entry — the end of Nathan Drake’s story — onto a series that was summed up pretty effectively as a trilogy five years and a new PlayStation ago. The ghost of Uncharted 3: Drake’s Deception, remembered less fondly in retrospect than the first two games, hung over A Thief’s End, too. Neil Druckmann and Bruce Straley returned from The Last of Us to completely take over for series director and writer Amy Hennig, who was absent the duo on Uncharted 3 and is no longer at Naughty Dog. 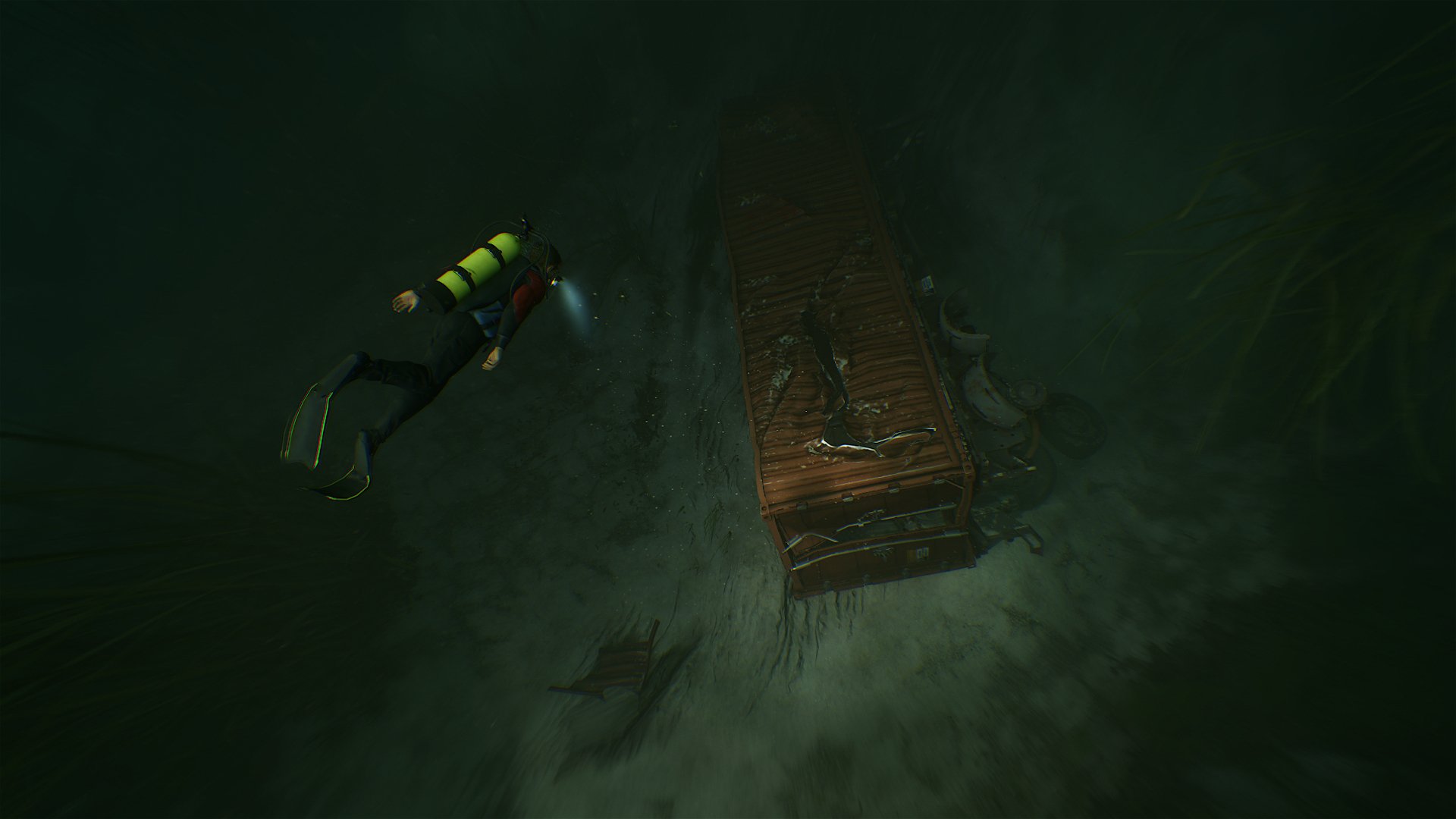 A Thief’s End opens with a showy, bombastic hint at the mayhem to come, but then pulls back to Nate’s new, normal life working as a diver pulling junk out of a smelly city river when he’s not hunched over a desk stamping forms. While donning scuba gear and hauling up crashed cargo containers might seem exciting to us desk jockeys, it’s a bit less so for someone who spent three adventures discovering lost cities and dropping 1,500 bodies along the way. But even when Nate’s boss offers him a job in Malaysia promising a big payout, the lack of requisite permits is enough illegality to completely dissuade him. He skips beers with the boys and heads home to Elena.

While the eventual stunning vistas spanning several continents impress — this is probably the best-looking game I’ve ever played — Naughty Dog channels the environmental storytelling of The Last of Us to paint a detailed picture of Nate’s domestic life that sells the fact that he’s put the adventuring life behind him. Back home, he files away the folder for the Malaysia job in an attic that’s stocked with interactable trinkets nodding back to his past adventures and there’s one particularly heartwarming scene where he rekindles old glory before heading back down to his grounded, suburban life.

I have never seen carpets so plush in a video game. Nate and Elena’s carpet feels like the carpet I’m currently threading between my toes. The bathroom counter is covered in lotions and product and hair dryer still plugged in. There are towels on the floor and a scale. When Nate looks in the mirror, he fixes his hair with one hand. The level of detail afforded to Drake’s new, unexciting life offers a believable level of intimacy. He picks up a DSLR and the camera moves to quasi-first-person, like when he looks at his journals in past games, and you actually see his thumb tap the directional buttons to go through old vacation photos. A Thief’s End is littered with moments that left me with a warm, genuine grin.

It fully captures that sense of interest I get when I enter a stranger’s home and see the person’s intimacies externalized, but without the distance a lot of “environmental storytelling” contains, because these characters are familiar, not just two skeletons sitting on a random futon. Before Nate even makes it downstairs to eat dinner with Elena, there’s a pretty full picture of his life, and the ensuing dialogue carries with it the familiarity and idiosyncrasies of long-term cohabitation.

Of course things cannot stay placid for long. Sam Drake eventually surfaces and in serious trouble: it seems that the brother Nate thought he saw die in a Panamanian prison 15 years ago and never talks about again had lived — that fact covered up by corrupt prison officials. But Sam was excised from prison by his cellmate, a notorious drug lord who demands half of the $400 million in fabled pirate treasure Sam talked about over the years to whittle away at his time served. The same treasure the brothers got themselves imprisoned in that jail to try and find (naturally, they simply found a clue, the next breadcrumb).

So while things get exciting quickly enough, with Nate lying to Elena about taking that Malaysian job after all to instead globe trot with Sully and Sam, the relative restraint exercised by Druckmann and Straley to sell the idea of homebody Nate is appreciated in the greater context of the story. In fact, save for the in medias res opening, Nate doesn’t even pick up a gun for the first third of the game. Nate enlists Sully specifically to execute the first leg on the trio’s tour — a public robbery in a high-stakes, criminal auction in Italy — without even throwing a punch or picking up a gun. When Nate finally does get to shooting — and I downed something like 700 people over the whole story — it is under duress, in self-defense, and feels more earned because of the preceding restraint.

It’s still a shooting-heavy action game after all, but gone are Drake’s Deception‘s uncomfortable, wave-based shooting galleries and awkwardly paced, Frankenstein’d set pieces. The insertion of more stealth mechanics also serves to counter Nate’s otherwise sociopathic tendencies. You can, in a few instances, sneak by entire platoons of assholes who want you dead. A lot of areas are larger and less linear — the new grappling hook lets segments of natural and man-made geography breathe a bit as every ledge no longer needs to be in arm’s reach. Enemies also have awareness indicators, meaning you can break line or sight or duck in tall grass to: 1) avoid being spotted or 2) lose enemies after they’ve spotted you. At the least, you can stealth kill some folks to make ensuing battles easier. Often you can pick off, undetected, just the one or two enemies in your way and keep on trucking, affording Nate the sensible option of minimizing the amount of murder he has to commit. 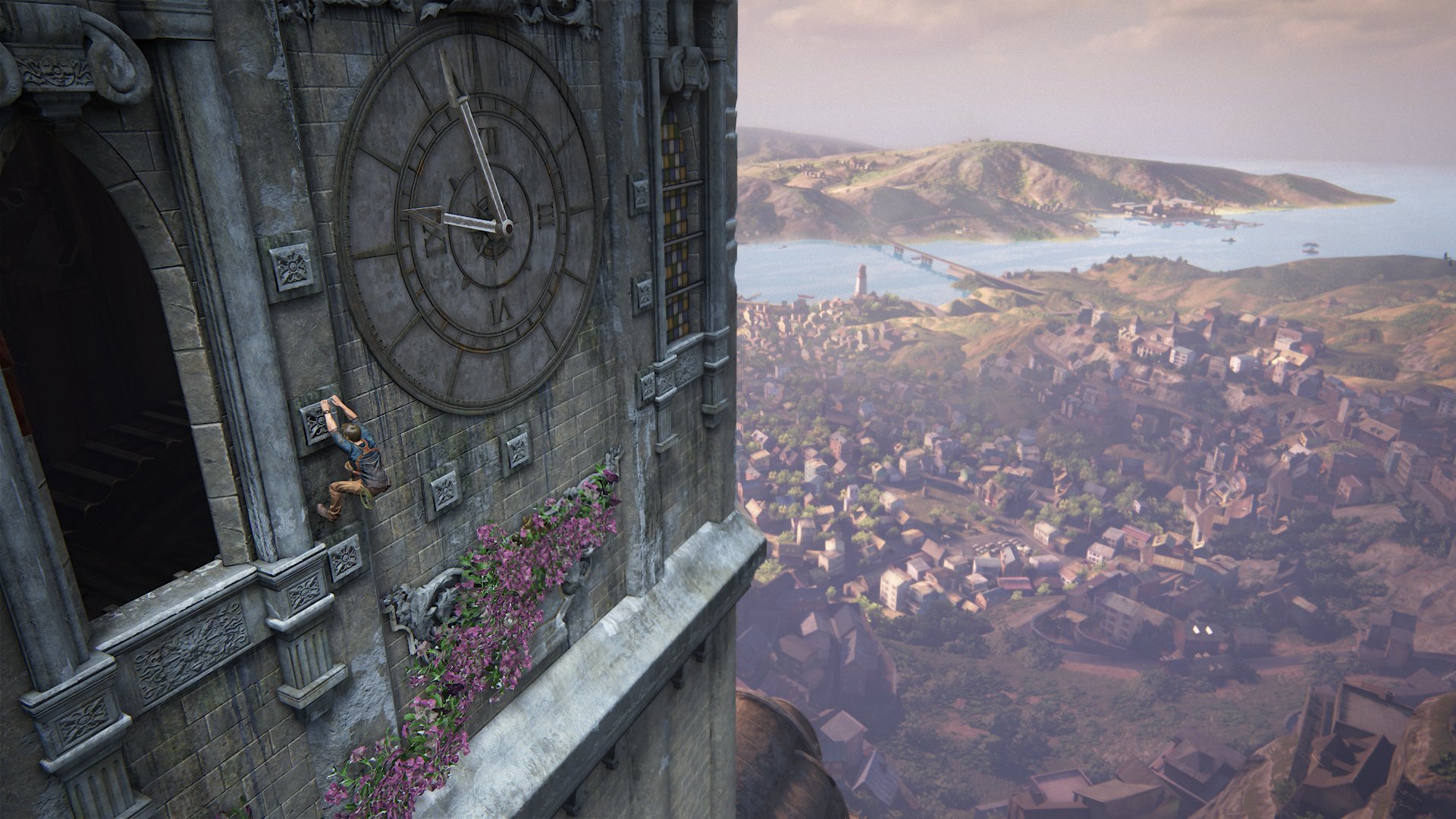 There are still video game contrivances. The Last of Us‘ wooden pallets make a spiritual return in the form of giant wooden crates. These often offer light puzzle-ish breaks in the platforming, which is as fluid and dynamic as ever with the addition of the grappling hook and a lot of sections with Nate sliding down steep inclines, even when Sam tossing you his rope and hoisting you up a ledge seems like it would’ve been a simpler solution.

Still, there are also unconventional, and unexpected decisions. Quiet moments that the team lets play out, in no hurry to jump to the next bit of excitement. Unique story framing, fluid use of flashbacks across several time periods. Rare, moving use of complete darkness hardly seen since Metal Gear Solid 3: Snake Eater — actually, there are a few real idiosyncratic moments that do kind of remind me of last year’s Metal Gear Solid V: The Phantom Pain. Exceptional underwater movement that’s likely to fly under the radar (same for the vehicular segments).

Naughty Dog pays homage to its roots by making a game where moving is as rewarding as more action-packed segments. Part of this can be attributed to an unrivaled animation team. Where the recent Tomb Raider games, for instance, can feel somewhat jerky and tight for the sake of responsive controls, Uncharted manages to control well in a way that feels effortless: it’s fluid, organic, and natural, whether Nate is reaching towards a distant handhold or slinking down lower and lower behind cover that is getting progressively destroyed. The other reason traversal is so rewarding, though, is that’s when much of the game’s dialogue is delivered outside of major cutscenes.

Lead writers Neil Druckmann and Josh Scherr have written strong dialogue across the ensemble cast that deftly mixes chuckle-worthy ribbing and quips, the occasional unforced reference (there’s a great wink to Raiders of the Lost Ark), and a rich conversational tapestry. Emily Rose delivers the strongest performance in the bunch as Elena, perfectly and subtly conveying the intricacies of her relationship with Nate over the course of the story. Aforementioned bold hinge Sam, too, fits in nicely, despite his inscrutable accent (the butt of a lot of “chowdah” jokes in my head) and it’s nice to see my hairline represented in the medium, and a flock of birds neck tattoo on someone who doesn’t look like they make yearly sojourns to Coachella. Even the petulant little rich boy antagonist, who shares both name and personality with a soap opera character in a mental association I can’t unlink, is a welcomed move away from a camp villain like Lazarevic. 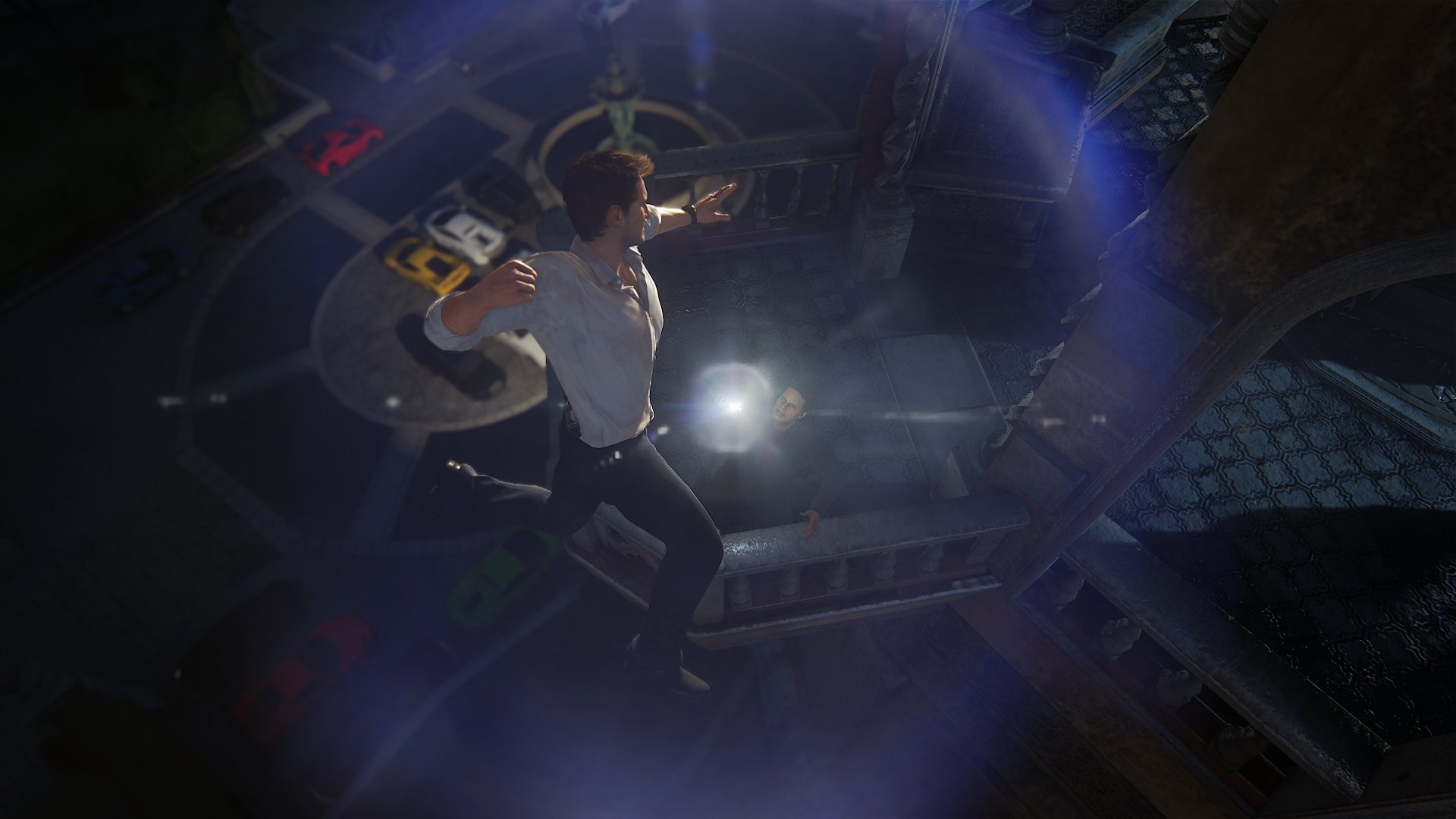 It does feel weird to keep using the word “restraint” in praise of a violent action-adventure romp about a worldwide race towards hundreds of millions in pirate treasure, but in A Thief’s End, more than ever in the series, Naughty Dog has done the little things right, using well-written dialogue and strong performances to tell a deeply personal story among a beloved, connected cast set against a larger-than-life backdrop.

That the interpersonal relationships aren’t overshadowed by $400 million in pirate gold, or by hundreds of dead mercenaries, is a testament to the caliber of storytelling. Even the ways Uncharted 4 retrofits in previous entries in the series — Young Drake’s shirt in Uncharted 3 seems to be a hand-me-down from Young Sam in this one — to bring it all to a well-earned, cohesive conclusion is impressive. Stunning art direction; satisfying game feel; a willingness to shake up third-person action conventions, to know when to introduce variety, or let a foot up off the gas; excellent dialogue that reveals a lot without oversharing; and a heck of a conclusion. A thief couldn’t ask for a better end.

[This review is for the single-player content based on a retail build of the game provided by the publisher.]