Hey guys, have you heard about this game Uncharted 2: Among Thieves?

It’s the follow-up to Naughty Dog’s 2007 PlayStation 3 exclusive, Uncharted: Drake’s Fortune. In the sequel, treasure hunter Nathan Drake chases the secrets of Marco Polo, falls down a lot, and blows a bunch of stuff up. The back of the box has this guy Nathan punching a dude in the face, firing a gun, and getting shot at by a helicopter.

I have to wonder: Why didn’t they show off some of the cool stuff that happens in Among Thieves on the back of the box? Because there’s a lot of “cool stuff” that happens… and keeps happening. For, like, over ten hours. And then more cool stuff happens online.

It’s not hyperbole to say that to date, the single-player campaign mode in Uncharted 2: Among Thieves is the best, most exciting action/adventure game you’ll ever play. It’s not because of anything Naughty Dog did with how you control or play the game — that remains largely the same from Drake’s Fortune, which was released in 2007. It’s not even because from a visual and technical standpoint, this may be one of the most impressive titles we’ve seen on any platform, including PC.

No, it’s because from start to finish, Among Thieves is an action-packed romp that delivers more over-the-top thrills than the best adventure flick Hollywood has ever produced. Name your favorite action-adventure movie. I’ll wait. Oh, that? Yeah, Among Thieves is better than it. Yeah, I said it. What?

With little explanation, the game opens with a cut-scene, as the unlikely hero Nathan Drake finds himself lying injured on the floor of a train car. Bleeding and struggling to get to his feet, the ground below him shakes and shifts. You soon come to find that the train car isn’t exactly on the most stable ground — it’s sliding off the side of an icy, snow-covered cliff. In most games, this would be the time when I’d put the DualShock down, maybe break out my cell phone and check my email or Twitter. But in the case of Uncharted 2, two things helped me kick my bad habits. 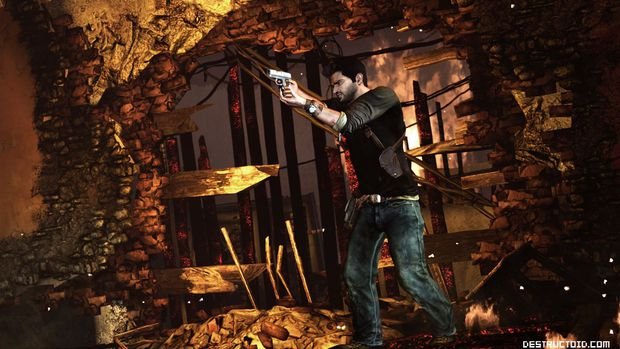 First, Uncharted 2 looks stunning. Even from the game’s first moments, it impresses with some of the most polished visuals ever seen in videogames — from character animations to the game’s lush, living, and vibrant environments, if you’re not impressed, you need to get your eyes checked. It’s hard to not want to look at it.

But most important is the second reason I couldn’t simply place the controller down and let the game go on auto-pilot — just about every time there’s action happening on the screen, the player has control of Nathan. In this first case with the train, it’s a platforming and climbing tutorial. Bits of the train break off and move as you shimmy up the side of the train car, and you’ll have to beware of falling debris in some areas. Simply put, it’s just about the most heart-pounding damned tutorial you’ll ever play.

Uncharted 2 is full of these moments, action sequences normally reserved for non-interactive cut-scenes. They’re littered through the game — you move Nathan as he stumbles down an alleyway to evade an oncoming tank, or dodge enemy fire while he’s trying to save himself from a collapsing building. Across Among Thieves‘ ten-plus hours of gameplay, there are dozens of instances like this. Giving away any more threatens to ruin the experience, with each moment more breathtaking than the last, all the way up to the game’s fulfilling conclusion.

From a gameplay and control perspective, not much has changed from the original Uncharted. Movement and aiming still feels a bit loose, and the game’s cover mechanic often stumbles to find certain walls, leaving you open. Navigating the environment can sometimes be trickier and more frustrating than it should be, with some ledges and steps that as a player you’d think Nathan could climb, and that he simply can’t. That, of course, is the worst that can be said about Uncharted 2 — it’s a lot like its predecessor. 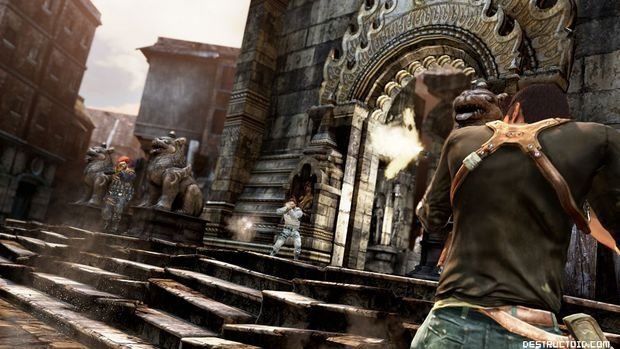 Of course, that means intense firefights, designed around some of the most clever levels seen in third-person gaming. Naughty Dog does an excellent job of constructing environments that lend themselves to deliberate use of cover, with enemy AI that can use these aspects to its advantage as well as any human player could be expect. Even the game’s platforming and light puzzle solving aren’t particularly groundbreaking; yes, there’s even one classic platforming puzzle that has you moving mirrors to reflect light against other mirrors to trigger switches. So it’s not so much what you’re doing in Uncharted 2, but the unique and skillful ways in which Naughty Dog has you using those learned skills.

Earlier in the review, I made a bold statement — in terms of visuals (and presentation), “this may be one of the most impressive titles we’ve seen on any platform.” For sure, whatever magic Naughty Dog has harnessed to create such a polished and bold-looking title on the PlayStation 3 needs to be shared with the rest of the gaming industry. There’s nary a muddy texture in sight, and lighting is perfectly placed in every cut-scene or action sequence; the game’s environments are open and gorgeous, and they feel alive.

Hell, outside of a rather-lengthy loading screen prior to booting up your game, Among Thieves seamlessly transitions from cut-scene to gameplay, from chapter to chapter, with not a single pause in the action. If there’s any technical and visual difference between non-playable cinematics and controller-in-hand gameplay, you’d be hard-pressed to notice at the pace in which Among Thieves moves.

But what truly brings Uncharted 2 to life are the game’s characters. From the stunning, natural facial expressions and body animations to the game’s organic dialogue, Naughty Dog have broken ground when it comes to what it means to tell a story with believable characters in videogames. During much of the game, Nathan will travel alongside an AI-controlled companion. It’s during these sequences that the characters’ personalities really come to life, with some of the most natural banter and interaction ever seen or heard in a game. The timing and delivery is always perfect and oftentimes revealing, making it easy to get emotionally attached to the characters on the screen. You can’t say that for many games, much less games of the action variety, so it’s particularly notable that Naughty Dog was able to deliver on such a level. 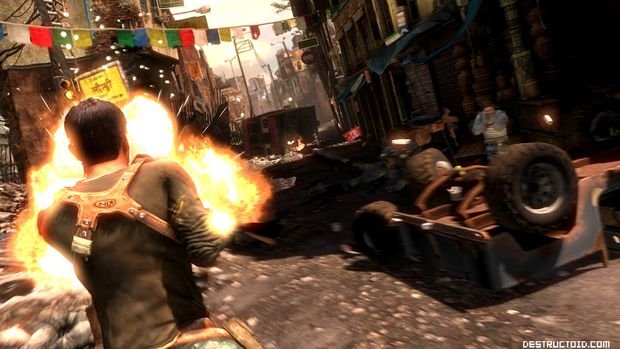 Surprisingly, the game’s multiplayer modes don’t feel tacked on or like a last-minute addition; they weren’t just included so Naughty Dog could slap the words “multiplayer” on the back of the game’s box. Regardless of how you want to play multiplayer — competitive or cooperatively — Among Thieves has got it covered.

Competitively, you can play standard team deathmatch (five versus five) modes or a number of objective-based modes, all of which take place in variations of the game’s single-player environments. All are fun, and even the worst player (like myself, for instance) will feel a sense of accomplishment as they level up their character, earning cash and the opportunity to purchase player buffs, weapon upgrades, and more.
If you’re more of a cooperative player, preferring to team up with friends to face off against the game’s AI, Among Thieves offers two options — instanced cooperative “story” missions, and a survival mode. Each mode can be played with a total of three players, with the latter being a “horde”-type mode where the goal is to cooperatively survive waves of enemies. As with the multiplayer competitive modes, these cooperative games allow players to gain cash and increase their overall level, which translates across both modes. This is good news for players who might not be comfortable hopping into a competitive situation right off the bat, preferring to ease in to the game’s online scene. 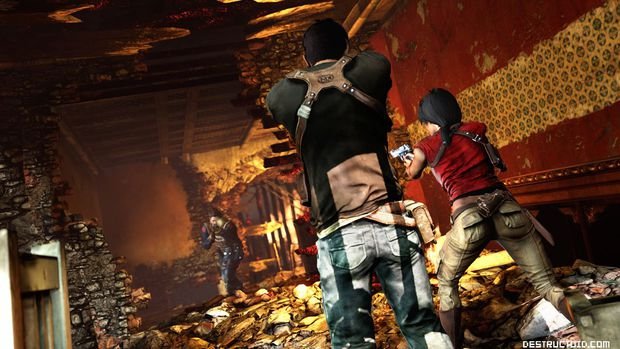 While it may seem like I’m glossing over these online modes, it’s fair to say that though they’re good, they don’t necessarily set a new standard for third-person multiplayer gameplay. They’re just damned solid, and an excellent addition to an already stunning package. The game itself can be completed in under 12 hours, not taking into account all of the the various treasures, collectibles, and single-player-based PS3 Trophies Naughty Dog have included. If Uncharted 2: Among Thieves simply consisted of the single-player story, the quality and overall experience of the title would make it a must-have.

If you own a PlayStation 3, Uncharted 2: Among Thieves belongs in your collection, no questions asked. If you don’t, know this — there’s no other game in its genre that even comes close to it on any other platform. Whether or not that makes Among Thieves the system-seller Sony’s been looking for remains to be seen, but it’s without a doubt among the best exclusive games found on any console this generation.