Should’ve taken that job at the fireworks factory

I didn’t have the greatest of starts with Uncanny Valley. After only 15 minutes of play time, I’d wandered into one of the “bad” endings seemingly by accident. On my second attempt, I encountered so many pre-release bugs that I ended up mistaking one poorly explained puzzle as a game breaker and started the whole game again.

Over the weekend, I received an email from Cowardly Creations, urging me to play a patched version of the game. If I was going through a rough start, so was the developer. And with that in mind, I gave them the benefit of the doubt. If the final release was “99% free of the bugs” and continually patched in the meantime, then maybe I could give this 2D horror/stealth game the attention it deserved.

But as it turned out, this became my dilemma for Uncanny Valley and my first review at Destructoid: Even if I was able to forgive it for the pre-release jitters, was the actual content genuinely worth your time and money? 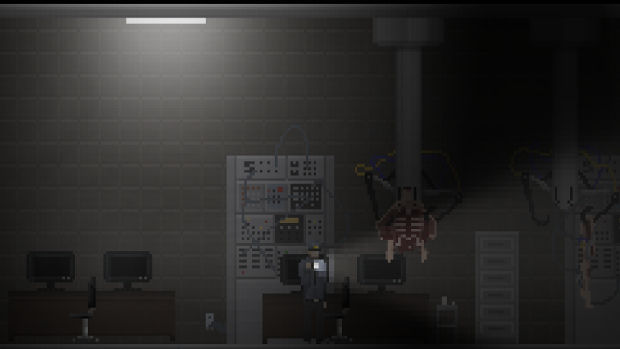 Things start off well enough with a panic-inducing nightmare, followed by a car journey through the pixelated wilderness. As Tom, the new night watchman at Melior — an abandoned robotics facility — it’s your job to keep the pilot light running until the place gets bought up by new owners. Tom’s only companions are Buck, a grouchy and overweight guard, and Eve, a cleaner who takes a keen interest in the new arrival. But while Tom suffers from nightmares of the past, his rounds at the facility quickly draw him into something much, much worse.

Sure, there’s a mystery to be found, but like a kid trying to pull a prank on you, it reveals its hand far too soon. In fact, with so many audio tapes freely scattered around the workplace, you’ll figure out the major twist before you make it past the first night. Overall, Uncanny Valley is a good story poorly executed. It’s choppy and muddled due to a reliance on repeat playthroughs and a presentation of two distinct halves.

In the first half of the game, you’re given a seven-minute work shift. In that time, you’re allowed to go anywhere on four separate floors, where you can read emails, collect audio tapes, or play the arcade machines. Once the time limit is up, you have a choice of snooping around for longer (in which case, Tom eventually collapses from exhaustion) or getting back to your room for a good night’s rest. Whatever happens, you’re always thrown into a nightmare sequence that can be completed or failed without much consequence, beyond the reward of more backstory.

Then after several shifts, time management is suddenly dropped in favour of a more traditional survival horror experience. It’s an odd design choice; one minute, you’re scrambling around to fit an investigation into your work schedule, and the next, you’re given all the time you need, right before the point of no return.

And it’s in the second half that Uncanny Valley falls apart.

It’s certainly more engaging, even if it does wear several influences on its sleeve. There’s a health system lifted from Call of Cthulhu: Dark Corners of the Earth, where injuries slow you down, make you louder, or ruin your aim, while the hide-and-seek gameplay intentionally evoke memories of Clock Tower. Unfortunately, and especially for long standing horror fans, it’s the consequence system and vague puzzles that turns all the goodwill into a frustrating experience. For example, after your first enemy encounter, you’re conditioned to stay out of their way, but then a door puzzle requires you to get attacked, just so you can control an enemy and let it aid you into the next room. There’s thinking out of the box and then there’s going back on everything you just said. 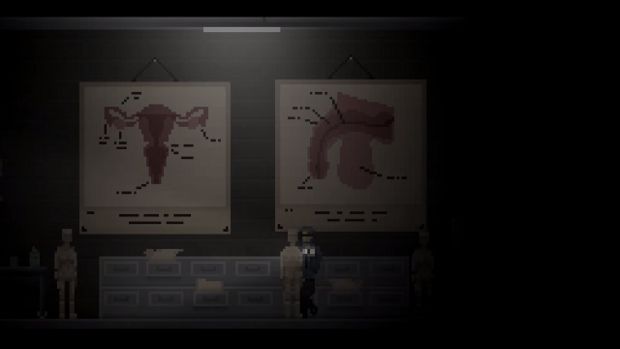 The consequence system, while subtle early on, ends up being a detriment to the narrative. Get knocked out at one point and you go from Scene A to Scene C, skipping Scene B and its vital exposition in the process; all because you didn’t react quickly enough or even know there was a choice. Tailored, unchangable choices are fine, but in one ending, a character shows up injured from a scene I never encountered. In another ending, a suspicious group wait outside for Tom without an introduction or a reminder of their identity. You just had to play better to know.

And for that, beyond the facility’s macabre history, you never really get enough motivation to care. Your decisions are informed by player experimentation rather than character incentive. In Clock Tower, Jennifer has the option to escape early on, mainly because of Scissor Man and a sense of self-preservation. Here, in an obvious homage, Tom chooses to run away simply because you stumbled upon Buck’s car keys, long before you encounter the horrors in the scary basement.

As previously stated, Uncanny Valley is intentionally designed for repeated playthroughs, but after the second, third, and fourth try, it feels like a chore as you piece together the core plotline from different decisions. Detours aren’t forbidden in storytelling, but with several listless endings on offer (plus one or two deliciously disturbing ones), it never feels definitive. Once you get the gist, there’s no need to go back for dimishing returns. 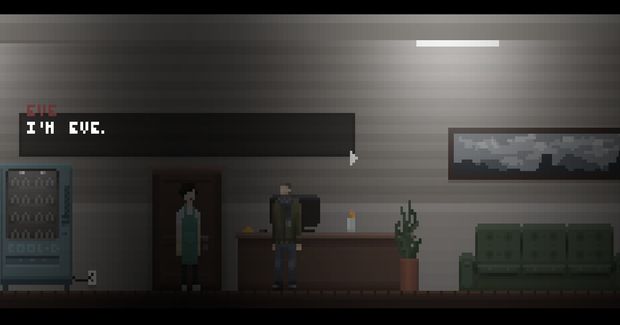 But there are positives lurking under all this frustration.

For a short game (clocking at 2 hours at best), it does panicky horror quite well; holding off on the worst elements and planting the seeds early on, like the only working generator in the woods. It’s more a case of when things strike, not what will strike. Once alerted, enemies smash through doors and chase you down until they fall apart. The shadowy horde that follow Tom in his nightmares are another horrific highlight. The pixel art is equally vivid and grim, with body horrors roaming the hallways and disturbing sciences haunting the background.

The soundtrack flicks between reflective melancholy and weighty industrial themes, and the voice acting on the audio tapes is perfectly pitched as offbeat and ominous. All in all, it captures the doom-laden mood of ’70s sci-fi perfectly; though, why the game chooses to make all the in-game dialogue as one-lined text is just puzzling. 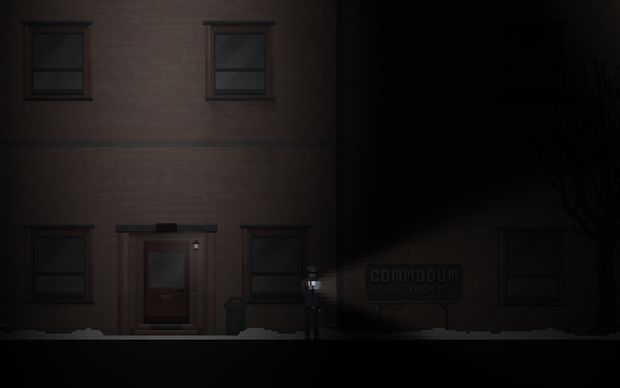 Unfortunately, I never finished my fourth run. Another save bug deleted a key item from my inventory and progression ground to a halt. I felt that after several endings and Tom’s history explored, I’d seen enough. All of which brings us back to that original dilemma, for which I’ll sadly say that, no, Uncanny Valley isn’t worth it.

It’s a game that rewards you for being better on the next attempt, which means a lot of players will get that same jarring and incomplete experience as I did, early on, only for it to be replaced by waning interest as repetition sets in. I wanted to enjoy Uncanny Valley, especially with its opening concept and jump scares, but despite all the assurances and hard work with those patches, it just wasn’t to be.