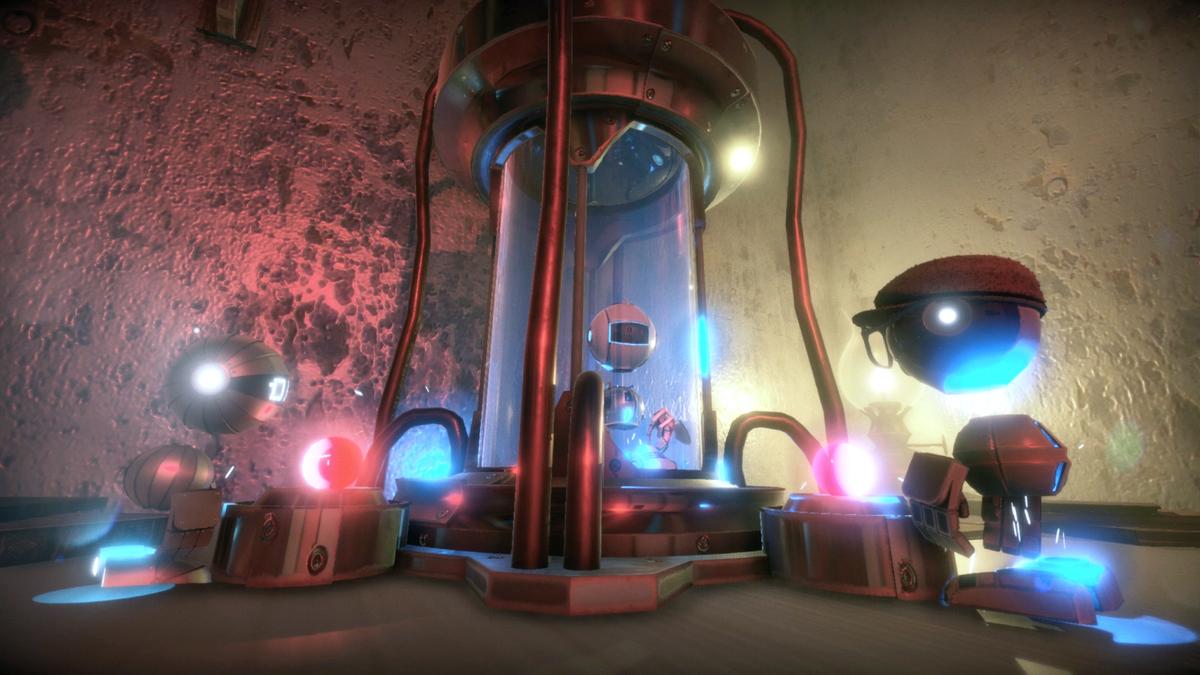 Most of Tyler: Model 005 is spent in the dark — proverbially and literally. The darkness saps this little robot’s battery and the light recharges it. That’s the central mechanic. But it’s also an amnesic tale of sorts where Tyler, the titular protagonist, is left wondering who he is and why he’s here.

It’s a perfectly appropriate theme because this game has identity issues. Tyler: Model 005 never figures out what it wants to be, what it does well, or what’s worth leaning into. It’s all so confused. 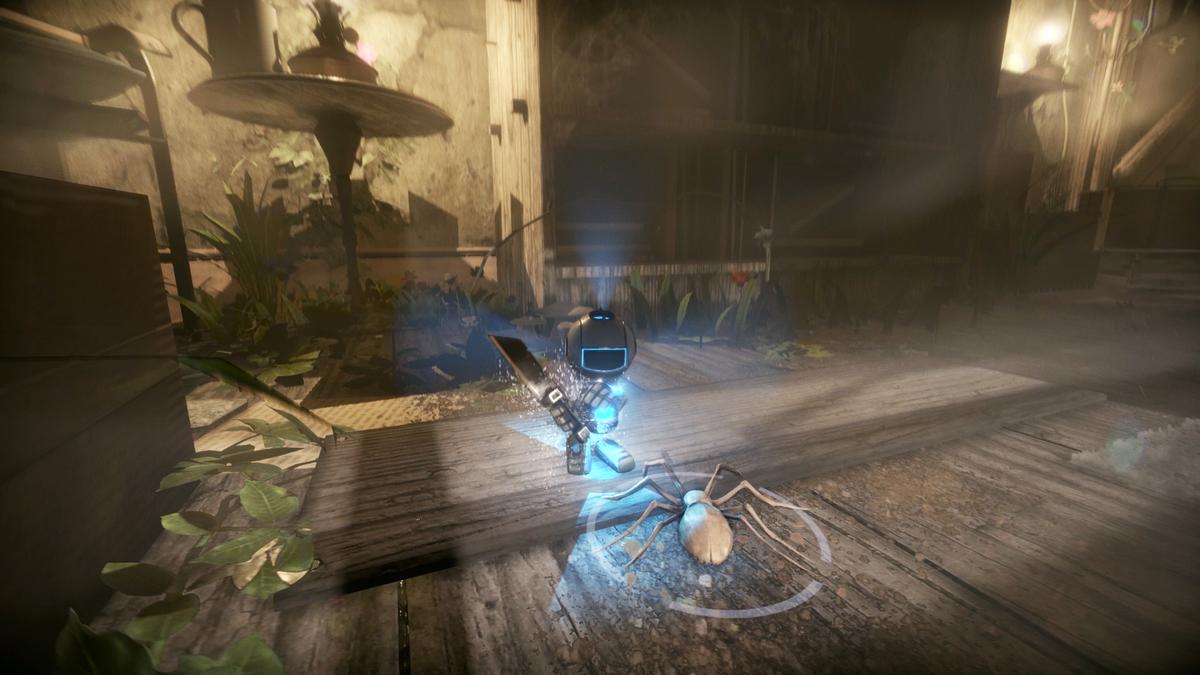 Tyler: Model 005 is a time-traveling story about a diminutive robot who’s suddenly thrust inside a 1950s-era house with no recollection about anything. At its core, this is an exploration game. This house serves as a series of isolated environments for Tyler to exhaustively scour. Because of his small stature, each room feels far bigger than it really is.

Tyler is left to jump and climb across everything, searching every last nook and cranny for easily-overlooked items. There’s a scramble to it because of the aforesaid necessity to stay out of the dark. Rooms are littered with light sources to activate, making each area less dangerous the more thoroughly it’s explored. By the end, there are hardly any areas that aren’t properly illuminated.

This is a godsend because Tyler: Model 005‘s platforming can be so frustratingly unpredictable at times. It’s always a gamble as to whether the robot will properly latch onto something or whether he’ll just slide right down it. But it’s a jank that grows on you over time. The latter half of Tyler: Model 005 isn’t as exasperating as the first half. (Also, there’s a deus ex machina rewind mechanic introduced halfway through that allows Tyler to reverse time by about five seconds. It helps for any platforming follies, even if it is basically explained away by “Wow, electricity sure can do some crazy things!”)

All that stuff more or less makes sense for Tyler: Model 005. The rest does not make sense. Every room is infested by bugs (ants, spiders, beetles, etc.), and Tyler has a sword attack that’s used to kill them. There’s an experience points system with upgrade portals to enhance Tyler’s basic abilities. For instance, there are categories for improving battery life, strengthening attacks, and climbing faster.

By far the most egregious example of questionable add-on mechanics is the inclusion of a tower defense mini-game. There are four instances where Tyler can defend a portal from waves of bugs. There are traps to lay down, and more traps can be built with the experience currency that the dead insects drop. Involving Tyler in the combat only works in the very beginning. Eventually, there will be far too many bugs to run crowd control yourself. 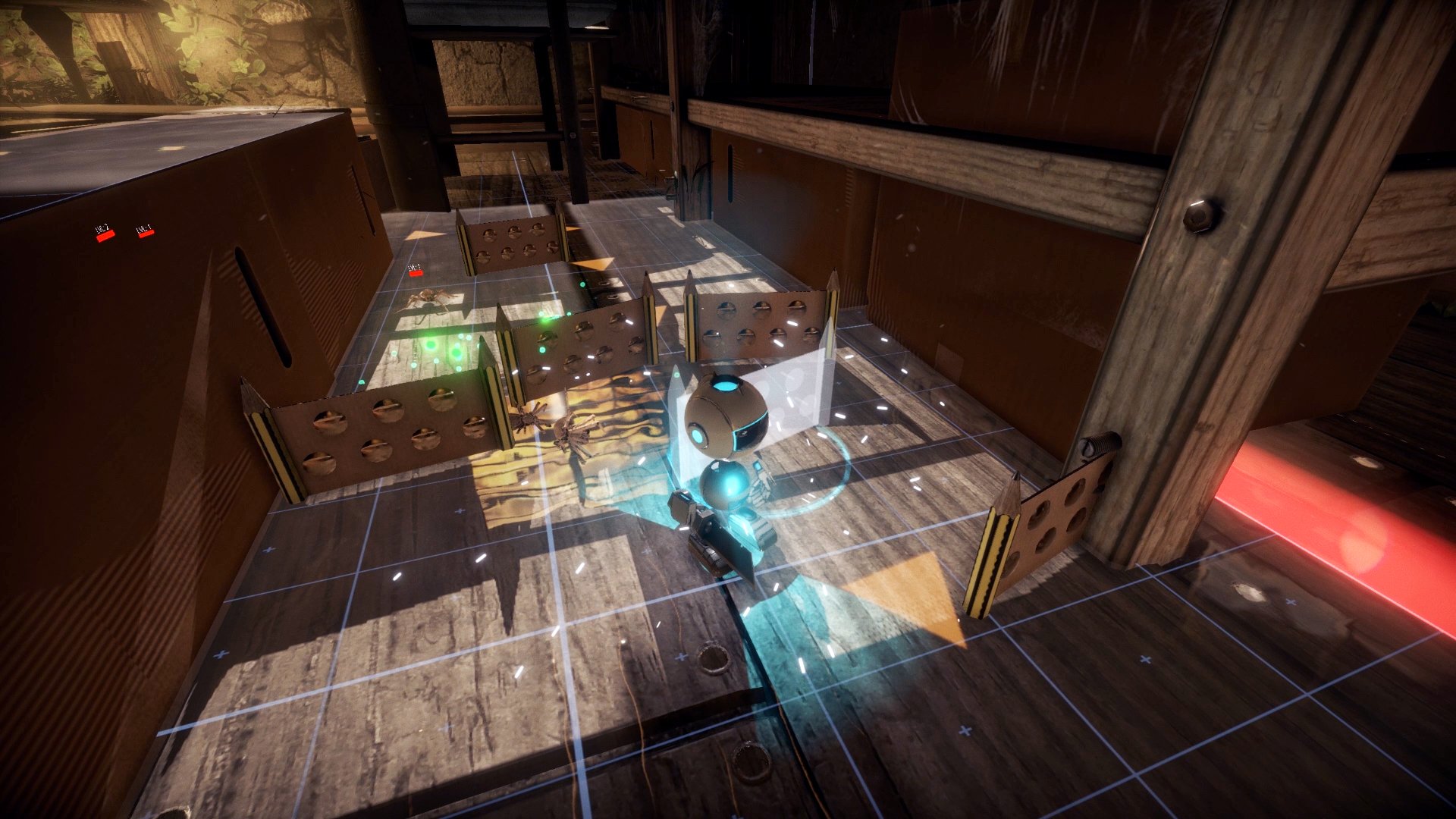 Instead, the key to victory lies in making a sloppy labyrinth of traps — as close to the portal and with as much overlap as possible. The bugs will quickly march straight to their deaths, one after another into obstacles that never break or wear down. The best strategy feels like the one that’s the least strategic.

Here’s the really weird thing, though: The tower defense mode isn’t mandated in any way. It’s never used to advance the story. It’s entirely possible to ignore these sections altogether. The only real reason to play it is to rapidly earn bolts for upgrades — which is another feature that doesn’t need to exist.

It’s as if developer Reversed Interactive isn’t confident that Tyler: Model 005‘s most appealing aspects are enough to carry the whole experience. Traversing these environments as a tiny robot is the most unique and enjoyable part of this game. It’s not perfect (hell, it’s not even great) but it’s usually pleasant. The darkness is an adequate-enough threat. Everything else — the bugs, the XP system, the tower defense — is a misplaced attempt to make this more of a game and it’s executed poorly.

There’s a cute little story about rewriting the past at the heart of Tyler: Model 005. It’s a shame those robots can’t revise history and trim this game’s excess so that it can focus on what’s important.