In an age where games often come as a form of escapism, it’s interesting to see one built around an over-the-top brawler intertwined with today’s social realities. However, Treachery in Beatdown City does just that — it’s a beat-‘em-up street fighting action game at its core with a campy attitude that likens to Bad Dudes, sprinkled with a hefty dose of pointed realism.

With disgruntled citygoers, outspoken racists, the evolving landscape of hipsters, gentrification, and the rising gig economy, it’s no wonder everyone is raging and ready to fight. 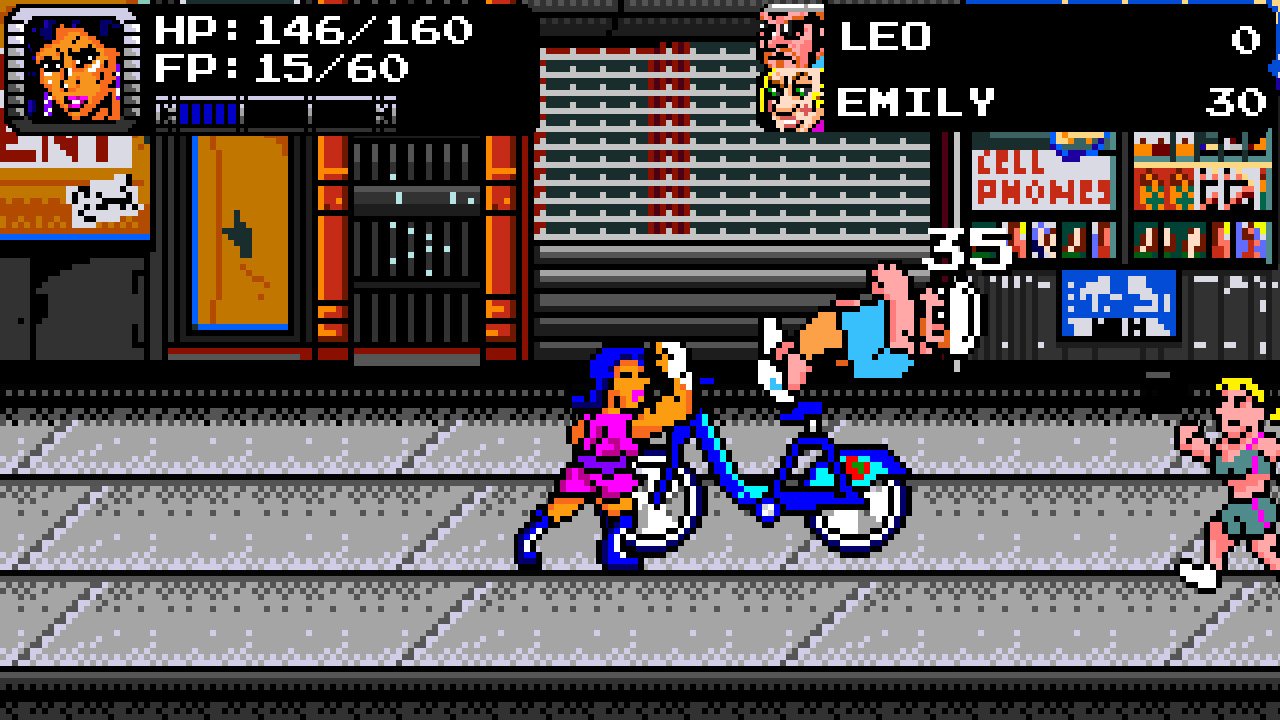 Treachery in Beatdown City begins with the mysterious kidnapping of President Blake Orama by the Ninja Dragons terrorist group.

You play three eclectic characters navigating through his disappearance: Lisa Santiago, a badass boxing street fighter and the chief of police’s daughter; Brad Steele, a pro-wrestler who runs a community center; and Bruce Maxwell, a stock trader moonlighting as a Kune Do/Capoeira fighter.

At first the trio gets tied up fighting racists and hipsters on bikes, and eventually lands into trouble with dirty cops working for the mayor, Mike Moneybags, alongside the city’s biker gang (who all also happens to run a tech company in the gig economy). The game is laid out like an NES brawler, with a simple top-down linear map leading to fights with various baddies across the city. In between you’re met with bystanders who offer advice, and Farooq’s DAMN Halal Cart which doubles as a heal and save point.

Instead of typical button-mashing beat-’em-up controls during fights, Treachery‘s main distinguisher is its strategic gameplay that operates more like a Final Fantasy game. Each character has a different build towards strikes or grapples, a certain amount of fight points (FP), moves that cost various FP, along with an action meter that recharges over time allowing you to counter and perform tougher moves. 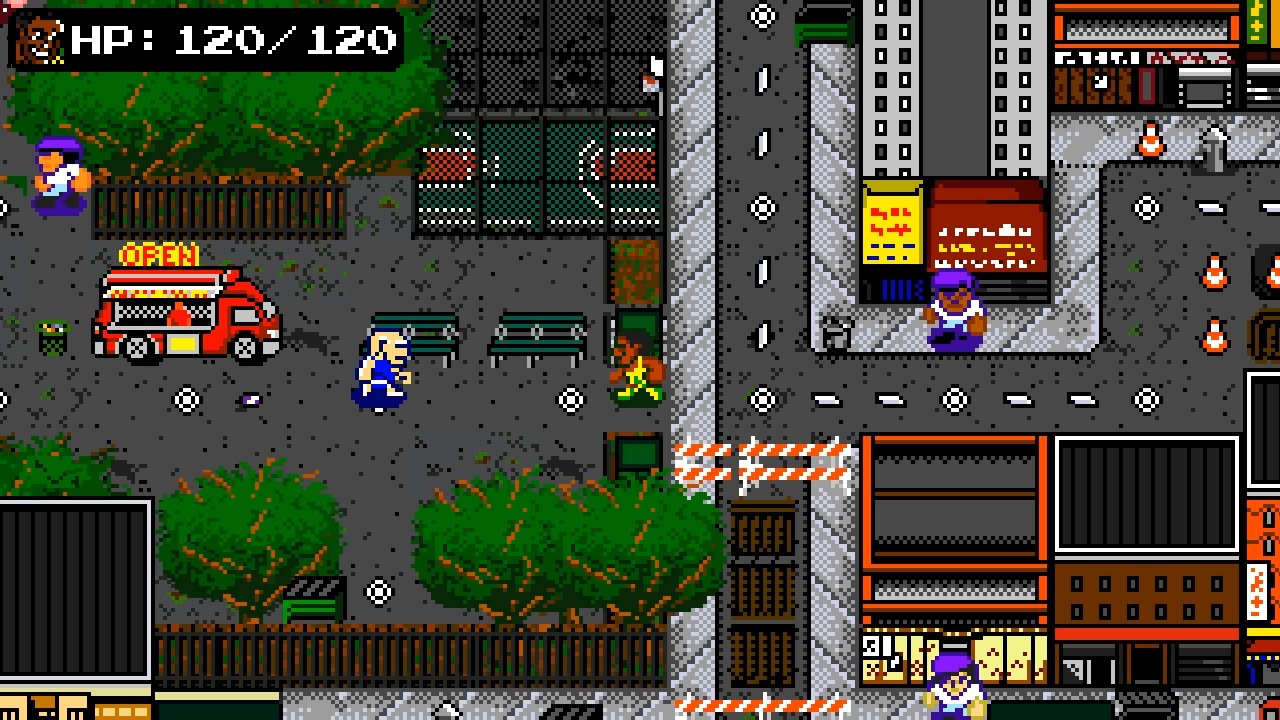 The interesting part is that you still need to move around the playing field to make sure you’re landing the most critical hits from behind, and also optimizing the number of people you hit at once to maximize damage. As your combos increase, a “revenge attack” meter also builds which inflicts a ton of crucial damage to enemies. Foes come in different flavors, so you’re not just fighting the same type of enemy over and over — for example, a “cheering” enemy adds buffs to other foes on the field while a “sneaky” type will be harder to hit with normal strikes.

The different fighting elements combined make for an addicting gameplay mechanic, especially because new moves are constantly granted, each one having various effects on enemies to impair them. I found myself trialing a lot of different moves to find the most impactful combos, and still didn’t get a chance to test them all by the end of the episode. I also particularly enjoyed the punchy social commentary, which is heavily sprinkled in between fights.

Despite the various enemy types and mini-bosses, the fights themselves tended to feel repetitive over time, especially after punching my tenth biker in the head. Although you can typically choose your fighter in advance of a fight (unless it’s a revenge match in which case your character is chosen for you), unfortunately if you fail a match, there’s no option to switch up fighters after restarting which was slightly annoying. There were also a few buggy moments with art or dialogue not appearing correctly, and my game freezing during a fight combo, but overall the bugs were fairly infrequent and it looks like a patch is coming to fix them soon. 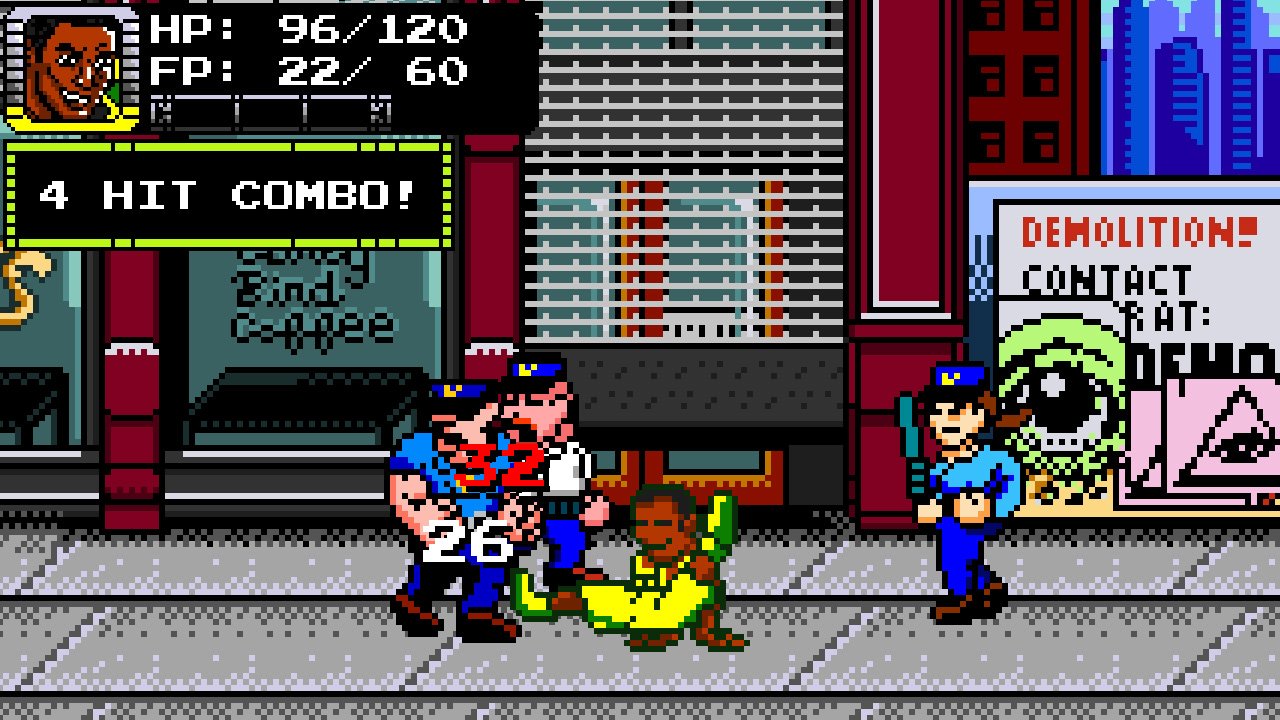 Another slight letdown is that Treachery in Beatdown City ends on a cliffhanger (given that this is the first episode, with a promise of Episode 2 for free). There’s a good amount of plot and gameplay in this episode so I wasn’t too bummed out, although I couldn’t help but feel a bit disappointed — which is perhaps more of a commentary about episodic games than a slight against Treachery itself.

I enjoyed my time with Treachery in Beatdown City, and despite a lack of overall polish, it does a good job of emulating beloved 8-bit fighters while maintaining its own ground as a modern brawler. I’m still left thinking about some of the unique strategic fighting elements, and as the fake PSA in the beginning of the game advises, winners don’t always have to mash buttons to have a good time.