We’re not sure what took so long for Tokyo Jungle to be localized (we first played it at the 2010 Tokyo Game Show), but it’s finally here and it’s every bit as silly and hilarious as we had hoped it would be.

This action/survival game, set in post-apocalyptic Tokyo, stars all the animals that survived when the humans disappeared, with a fuzzy little Pomeranian puppy being the game’s banner character. With food supplies depleted and no humans around to feed them, these animals are forced to take to the gritty, urban streets of Tokyo to fend for themselves. And when they find there’s no food out there?

Well, they begin to eat each other.

First off, if you don’t laugh your ass off at Tokyo Jungle, there’s something seriously wrong with you. It’s not the deepest or most polished game out there, but it makes up for any faults with ceaseless hilarity. Reading about how you’ll first control a cute little Pomeranian pup to go up against other animals is one thing, but actually mashing the button to have the little guy swipe his paw at a roaring lion — or a massive, chomping alligator — is another. And when you nail a perfect takedown, where blood spurts from your prey’s neck? Uproarious! I’ve dumped a lot of time into Tokyo Jungle‘s survival mode this past week, but the strangeness of its setting has yet to wear off for me.

Alligators and lions, you ask? Oh yes, as well as many other animals that you wouldn’t expect to find among the highrise buildings of Japan’s capital. Domesticated animals like dogs, cats, and rabbits run wild in the streets alongside beasts from the rural outer fringes, like pigs and deer. The really crazy animals, such as hyenas and bears, originate from the city zoo, now out on the loose to find enough prey to live through another day. 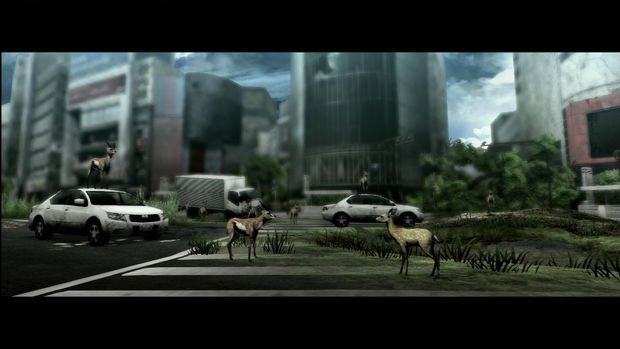 Survival is key in Tokyo Jungle. The game’s primary mode has you selecting an animal and immediately hitting the streets to look for prey to munch on. For every second that you’re not eating, a hunger gauge continually decreases. When that gauge is fully depleted, your life bar begins to decrease, bringing you closer to death. It’s as simple as kill (and eat) or die. When you finally do die, the game rates you on how long you’ve managed to stay alive.

For the carnivores, learning to hunt is the only thing that will have them seeing another day. Early on, animals will have to track down smaller prey, like birds and rabbits, as anything else would be too dangerous to take on directly. But as the animal eats these smaller prey, it becomes larger and stronger, enabling it to take down bigger beasts and have an even meatier meal. All the while their caloric intake is counted; more food eaten makes for a stronger animal.

These animals have both a clawing and biting attack to work with in the jungle. Clawing (square button) will swipe away at an enemy’s life bar slowly, and biting (right button) will have it literally going for the jugular with a dash attack. Once dead, and if the coast is clear, the animal can begin devouring its kill, with each bite turning into experience points that can lead to increased levels. Only having two attacks may sound limiting, but it turns out that each animal type requires a slightly different approach. Plus, I never felt like scratching the faces off of cats was anything less than entertaining. 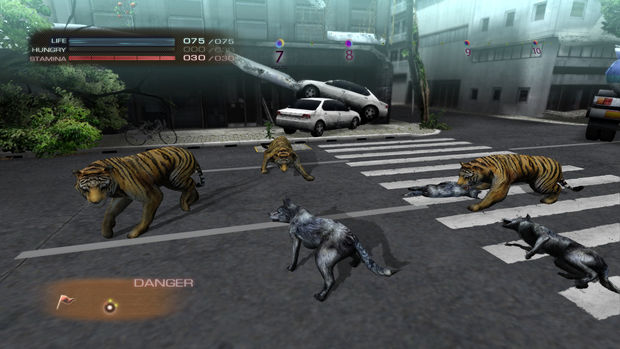 Stealth play comes in handy when you have a small animal that is going up against a much larger one — or worse, a full pack of beasts. All animals can quietly creep in high grass scattered all over the city to try to stay concealed until an attack opportunity arises. Hidden there, a correctly timed press of the bite button has the attacker jumping out and latching onto its prey’s neck directly, instantly killing it. At the very top level, thorough patience, it’s possible for even a little puppy to take down huge jungle-type creatures. And, as I said before, it’s never not funny.

Stealth play is the only way to go for the herbivores. Playing as a deer, for example, is much different than playing as a dog. The deer is forced to sneak around and nibble on plant life, working to avoid falling prey to roaming carnivores. It may have speed on its side, but they’re always on the move as edible plant life is scarce in this post-apocalyptic world. Herbivores do have attack abilities, but they’re more for defense, as a kill will never be a meal for these animals. 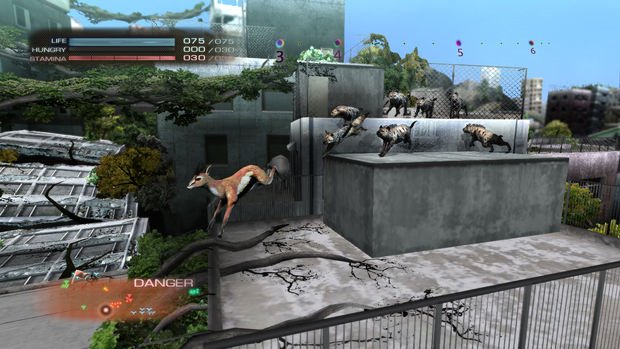 All animals can increase their chances of survival by mating. This involves “marking” territory in a given area, finding a compatible mate, taking it back to the nest, and then mounting that mate (Really! The mounting is shown) to make babies. If all goes right, the offspring will take on some of the traits and abilities of the parents, and then travel in a pack to carry on in the world. The pack works together from then on out while hunting and exploring, and should one member die, another immediately takes over. Hopefully, at least one will survive to find its mate to have their own offspring, bringing another generation into the world.

Although there’s a lot to take in here, in practice, the gameplay really is as simple as trying to live for as long as possible. While there are equippable items (your dog can wear a cute hat or jacket) to find to improve stats a bit, Tokyo Jungle’s survival game really boils down to scrambling to find enough food to last until you find a mate, procreating, and then doing it again. I’ve had stretches where I’ve lived through five or six generations and dozens of years, through rain storms, animal revolts, and toxic air outbreaks. But you will eventually die. That’s just how it is. 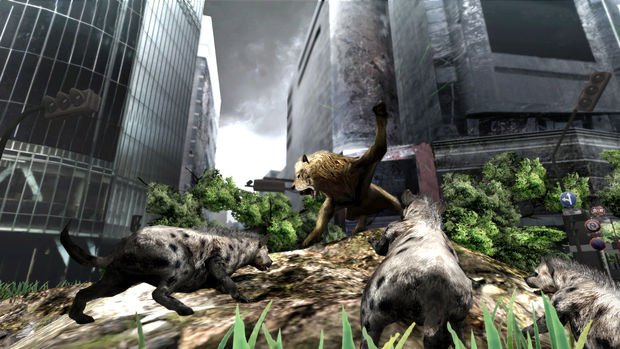 Each animal type has a list of challenges to take on to keep things interesting in survival mode. Early challenges have the animal doing simple things, like racking up kills, or marking territory. High-level challenges are more like quests, and have animals working to dominate an area. The top-level quest for the Pomeranian has it going to one district of Tokyo to take out all the cats in an all-out turf war. It gets messy! Completion of these top-level challenges unlocks a new animal to play as in survival mode.

Tokyo Jungle‘s story mode features unlockable chapters (earned in survival mode) where some animals star in their own special tale. They use artwork and text to set up situations with a bit of a backstory, though the stories are pretty silly. Gameplay consists of missions that use survival mode’s combat and exploration play, making for bite-sized sessions that aren’t too much different than the game’s main mode. While these stories can be fun, they don’t have the holding power that the survival mode does. 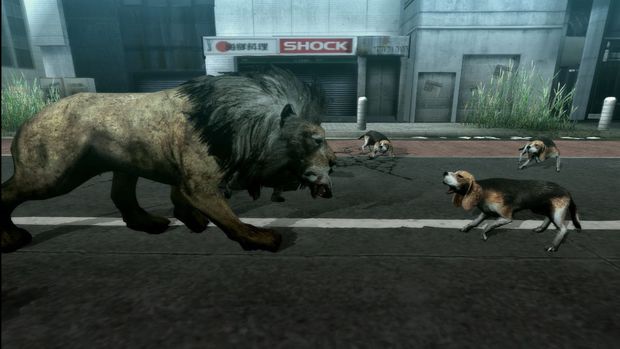 While mutilating and devouring the flesh of cute little animals under ruined, famous Japanese landmarks is a riot, there’s not much more than this to do in Tokyo Jungle. The control is sufficient, and the hunting action is quite fun, but as soon as the thrill of the hunt wears off, it’s really just running around in circles until you eventually die. And, unfortunately, there’s not too much of a difference in the way the various animals control, which doesn’t help the feeling of repetitiveness.

While some may take pleasure in trying to top the leaderboards for their survival skills, I feel that most will quickly tire of this game after putting it through its paces.

That said, you should still dive into Tokyo Jungle. While a bit shallow, it’s an insane idea done really well. If nothing else, it’s worth your cash just to see your fantasy animal match-ups go down. Really, you haven’t lived until you’ve seen a pack of puppies take down an alligator.