In the mid 90’s, games produced on “CD ROM” format became available to the mass market for a relatively low cost. With a vastly expanded capacity for storage to work with, developers jumped at the chance to integrate “Full Motion Video” into their projects at a record pace.

When human beings suddenly can do something, they will do it, regardless if they should. That’s why Christopher Walken, Dennis Hopper, and Cory Haim all threw in with some of the strangest, technically unsound narratives in the history of storytelling (in gaming or otherwise). It was a “look before you leap” time in development, one that yielded the kinds of games you just don’t see much of anymore.

Tokyo Crash Mobs marks the return of the kind of surrealistic FMV gaming that I once thought was gone for good. The developers at Mitchell Corp. were clearly excited to try their hand at crafting some live action 3D cut scenes, though it’s not entirely clear that they had any sort of “plans” or “direction” before they started production. What they did have is a green screen, a few models, some oversized business casual suits, and a ninja costume. The end results are nothing short of magical.

Oh, and they also made a pretty good puzzle game too. 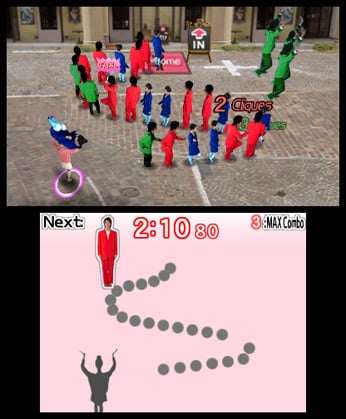 Tokyo Crash Mobs is a match three puzzle game where you play as one or two young women who throw or roll human beings at other human beings wearing the same colored clothes. This makes the human beings form “cliques,” then disintegrate. At first, the two women appear to have different motivations for taking action in this way. Grace wants to have a fun time at the club, but she’s at the back of the line. Only the first ten people of the line will get in. Her solution to this problem is to kill everyone in front of her using her mysterious disintegration magic until she gets to the front.

Savannah, the game’s other protagonist, is in a less aggressive position. She a sleepy college student who is either dreaming, hallucinating, or something else. The game’s loading screens read with the text “Delusion Now.” Does that mean the whole game is just a surreal trip into the subconscious? Regardless, poor Savannah isn’t trying to get into any club. She’s just trying to stop a group of soulless Scenesters from getting to a giant button. If they get to the button before she can evaporate them all, they’ll send her into a cosmic limbo where she’ll be presumably trapped forever. For Grace, it’s all about the club. For Savannah, it’s exterminate or be be exterminated.

Eventually, the two women meet in a scene that can only be described as “important.” From there, they take on the important task of disintegrating colorful ninja clones. Unlike the Scenesters, these ninjas are not afraid to get violent. Savannah and Grace will have to dodge attacks and remember that offense if the best defense if they want to get out of this alive.

It may sound pretty silly, but for the most part, these dialogue-free cut scenes don’t appear to be played for laughs. Besides all the story based moments, there are plenty of shots of trees, and skyscrapers, and just … stuff. Why these moments, or any of the games FMV moments exist, is anyone’s guess. You’d be better off trying to figure out why Iwata was being so coy about those bananas. Regardless of what it all means, Tokyo Crash Mobs shows that Nintendo is willing to get weirder than ever. I couldn’t be happier about that. 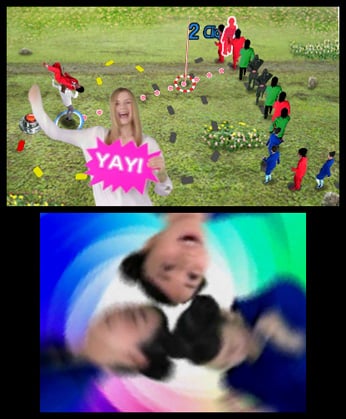 While the game’s FMV portions are clearly the star of the show, the underlying game here offers an admirable attempt to make a relatively tired puzzle formula feel fresh and fun again. The actual game parts of Tokyo Crash Mobs are a riff on Mitchel Corps’ 1999 puzzle game Puzz Loop (also known as Magnetica).

The match three theme remains throughout, though there are plenty of variations on that theme. As the game progresses, Scenesters get more active and will jump and move out of the way of your attacks. Environmental obstacles show up that force you to rethink your shots. Scoring combos will help you get a gold medal. An exploding beachball may fuck up your shit. The ninja “boss fight” sections even offer some surprisingly fun (but optional) motion controlled segments. 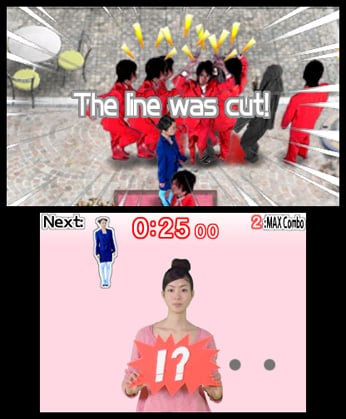 In terms of replay value, the game has a relatively lengthy “story” mode (took me about two and a half hours to get through), an endless challenge mode, and an appropriately difficulty to navigate movie gallery mode. If you play just for the story, you may find the game’s $8 price tag to be a bit hefty, but if you plan on playing challenge mode, you’ll get your money’s worth.

So that’s Tokyo Crash Mobs, a game that I truly did not see coming. Fans of surreal FMV and/or match three puzzle games should check it out.