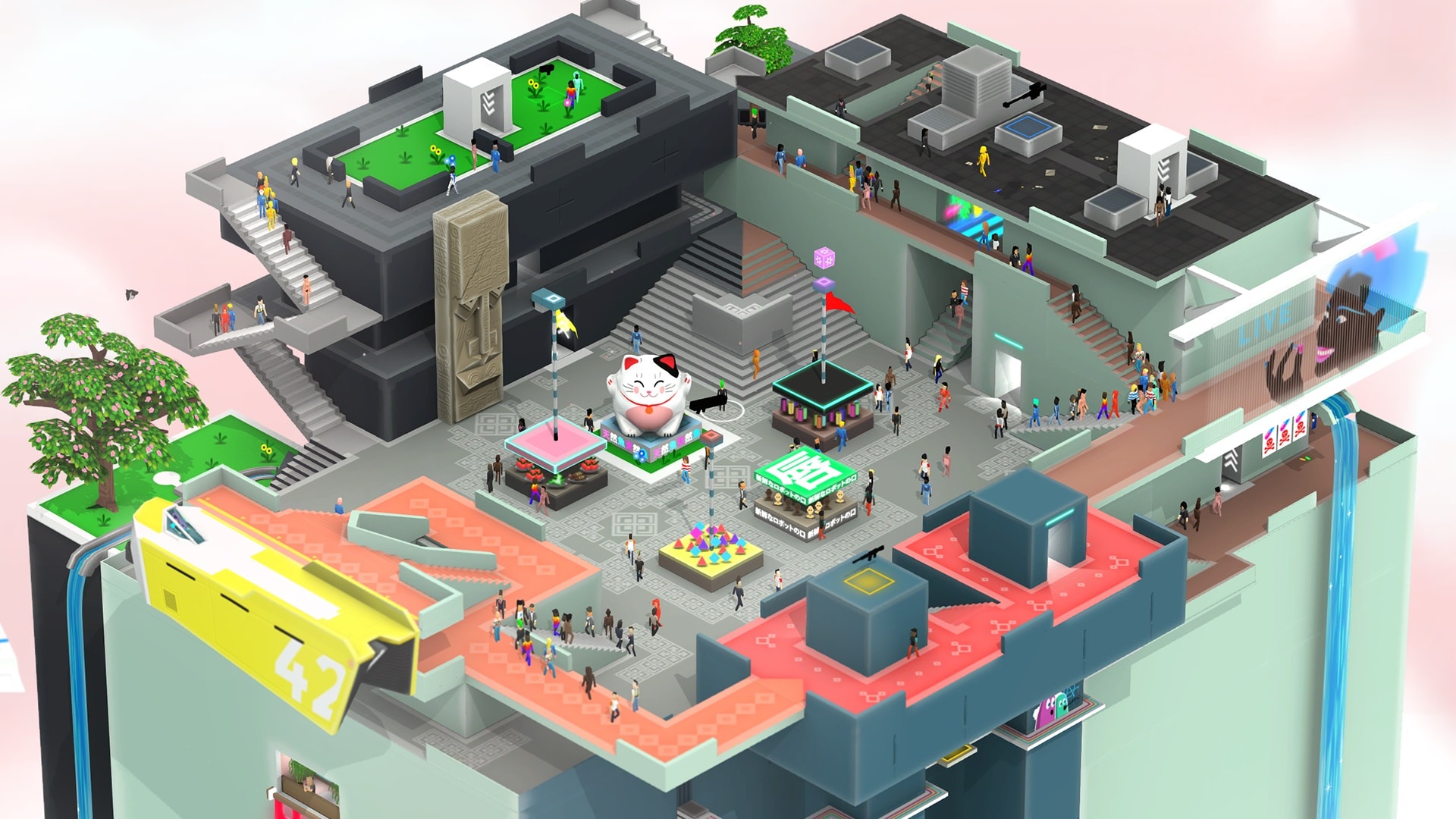 There’s a neon heart at the center of Tokyo 42‘s cyberpunk playground. The isometric, open-world action game feels as though it could fit in your hands; a diorama of sleek architecture meant to be spun and examined from every angle. Its mix of winding pathways and floating islands evokes an inviting vision of life in the future.

But there’s danger amid Tokyo’s bustling cityscape. Street gangs wander underneath the electric glow of floating billboards. Assassins take contracts from vending machine-like terminals and no one bats an eye. Shadowy organizations pull the strings of industry from behind the protection of locked corporate boardrooms. In Tokyo 42‘s world, everyone’s looking to take advantage of someone else. Death and double-dealings are a part of everyday life because death is only a minor inconvenience. Through the use of a simple pill, biting the bullet just means respawning a few moments later. 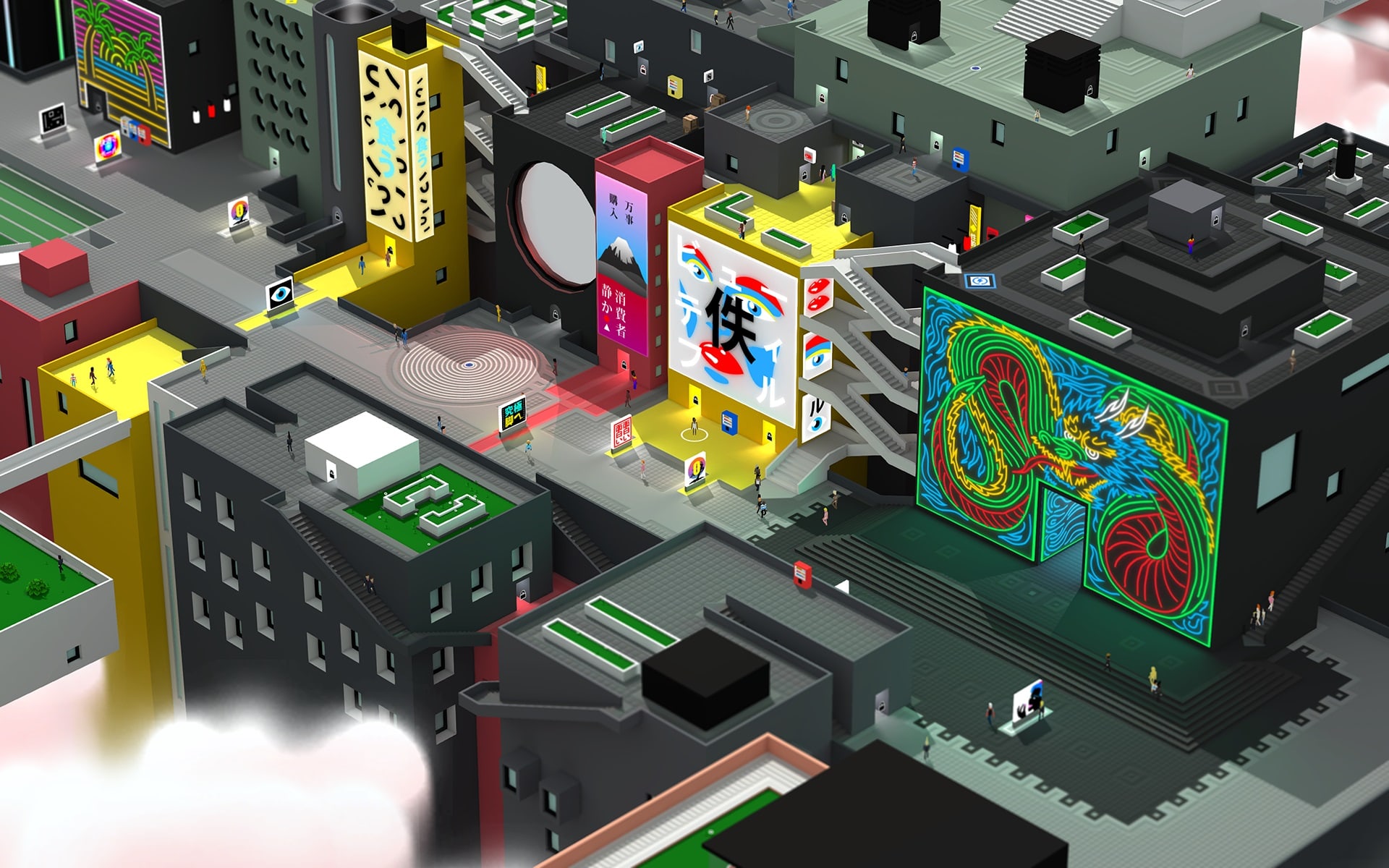 The combination of a futuristic city and a population that collectively ignores death drives Tokyo 42 forward. It follows a format that’s not unlike the original Grand Theft Auto, tossing players into an isometric world of crime, constant danger, and plenty of creative gameplay opportunities.

Most of Tokyo 42 revolves around taking on assassination contracts. After being framed for murder, the nameless, body-shifting protagonist decides to become a killer for hire to chase down information about his betrayer. It’s a bit of a loose narrative, but it ambles along by introducing an eclectic cast of clients and corporate entities, all of whom are intent on causing some mischief. After a short introductory scene, players are let loose in Tokyo, where they’ll lob grenades at pesky Golfers, incite gang wars between spiky-haired Punks and well-dressed Suits, race souped-up motorcycles through crowded pedestrian paths, or participate in any number of equally absurd scenarios.

The inherent silliness of Tokyo 42‘s missions helps bring its stylish setting to life. Because the richest members of society have little reason to fear for their lives, it’s not surprising that the jobs they hire assassins for are insane. Instead of moral handwringing over the nature of killing in a society that doesn’t fear death, Tokyo 42 opts for a lighter, more satirical outlook that lines up with its open-ended gameplay structure.

And that lighthearted, loose approach applies to the game’s actual missions as well. More often than not, players are free to complete objectives however they see fit. Climbing the side of a building and sticking to the shadows to eliminate any isolated enemy patrols with a katana is just as valid as firing a rocket launcher into throngs of bodyguards and picking off anyone left standing. Tokyo 42‘s campaign and side missions — or, the madmen who employ the player’s help if you want to get granular about it — don’t care how a job gets done so long as the target ends up dead. This encourages experimentation and creative thinking. There’s almost always multiple ways to accomplish a single goal because each mission seems designed so that combat is treated as a puzzle rather than a solution.

The same can be said about Tokyo 42‘s overall world design. The titular city is the game’s greatest asset. It’s as detailed as it is beautiful, full of teleporters and hidden routes that reward observant assassins. Tokyo is a layered metropolis, with snaking stair sets and tiered courtyards that require rotating the game’s camera to take in ever detail. The ability to manipulate the camera — which works similar to the mechanic in Fez — adds a literal layer of depth to the game, allowing it to obscure paths and secure routes behind buildings.

Even though it’s a city designed in miniature, Tokyo 42′s setting feels lively. There’s always a crowd of civilians milling about, that can serve as a relaxing backdrop or a convenient form of cover during a hasty escape. Despite the pulled-back perspective, it always seems like there’s something interesting to watch, be it a random shootout or the lazy crawl of floating traffic. Rotating the camera around and exploring Tokyo in between missions — like nailing a dangerous jump between districts, only to land on an elevator that leads to an elusive new weapon skin — is arguably the most enjoyable part of the game. And that’s saying something, considering pulling off increasingly outlandish assassinations is always a blast.

But while rotating the entire city with a single button press adds an entirely new perspective to Tokyo 42, it also leads to its biggest issue. It’s easy to get turned around during a hectic gunfight. Even with a full arsenal and a badass trench coat (which serves no purpose other than making the main character look cool), there’s never a time where players aren’t outnumbered. Your survivability revolves around quick shooting, finding cover, and mastery of the camera. Spinning it one too many times, moving, and realizing you’re headed right towards a deluge of enemy bullets happens a bit too often. Tokyo 42 makes liberal use of checkpoints — almost as if in silent admission to this fault — but its camera can still lead to some frustrating moments when combat reaches a pitch.

But even with the occasional camera-related annoyance and a couple of less-than-stellar timed platforming challenges, Tokyo 42 is a thrilling game. Its satirical storytelling and corporate spin on sci-fi mesh quite well with the open-ended approach to gameplay that allows players to define their own assassin. The litany of weird gadgets (like a cat who detects nearby enemy assassins) and colorful characters keep everything fresh and unpredictable right up until the end. This spin on Tokyo is breathtaking to view and full of memorable moments, all of which are worth dying over and over for.