This chore of mine

Iskra, our little sad-eyed girl, gets the canned food. She doesn’t like it and complains about the taste, but she’s small and the tiny portion will carry her further than anyone else. Marko, who risked his life the night before scavenging in Rebel-held territory, is rewarded with a proper bowl of home-grown veggies and rat meat. Emilia gets one, too. She hasn’t eaten in days and the long nights of standing guard are making her edgy. Christo, Iskra’s father, goes hungry and puts on a brave face. He spends the day hacking apart the chairs and recliners of the shelter for fire wood. The cold is settling in.

This War of Mine: The Little Ones excels in depicting these fragile moments of raw humanity. Inspired by the siege of Sarajevo and originally released on the PC in 2014, this console port/expansion is a grim look at the side of war that usually gets overlooked in video games. The typical eye-popping explosions and bitchin’ guitar riffs are replaced with ruined homes and shivering people huddled together, listening to the static popping of a half-busted radio for any updates on when the siege will end. War is depicted as a monstrous force that chips away at humanity through a combination of savagery, cynicism, and desperation.

It’s a powerful message that is, occasionally, expertly delivered. Unfortunately, that heart-wrenching message is undercut by shaky mechanics and a console experience that picked up a few wounds traveling from the PC to the living room. 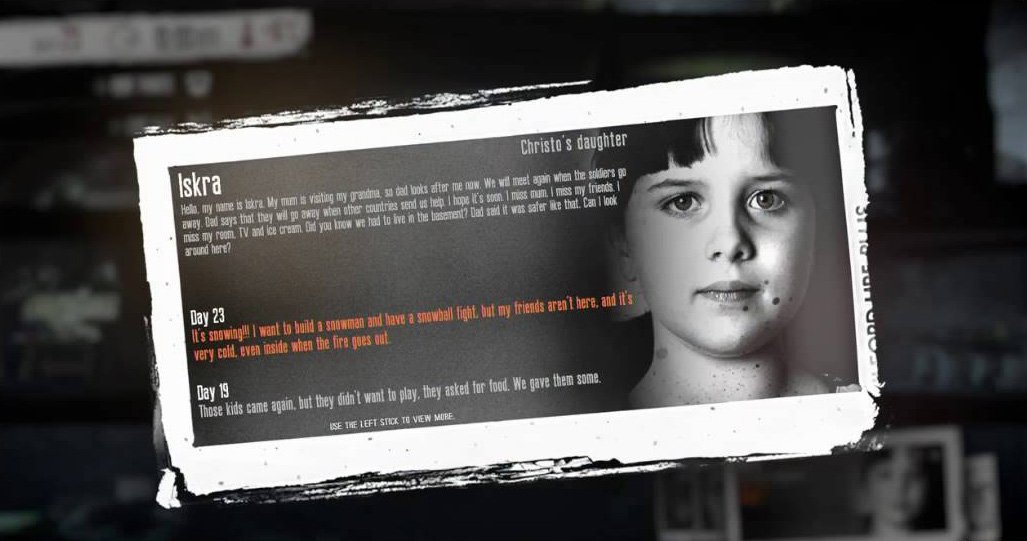 This War of Mine starts in a squalid manor half-ruined by shelling, and goes downhill from there. Set in a fictional Eastern European city, the starting scenario tosses three unlikely allies — a football star, a TV chef, and a fireman — together. They try to survive in the desperate ruins of their once-prosperous city, and in the shadow of their once-idyllic lives. Like a particularly depressing mod of The Sims, the player takes control of the survivors to rifle through their home, collect whatever meager scraps they can find, and attempt to put together the very basics of survival (emphasis on “attempt”). Permadeath and auto-saves make sure you’re stuck with whatever mistakes are made, and I slipped more than a few times while dancing on the razor’s edge of survival.

At night, the genre transitions (somewhat awkwardly) into a stealth/exploration game, as one survivor braves the sniper fire and uncertainty of the dark to forage for supplies while the others stay behind to guard against raiders or catch some fretful sleep. This involves meandering through rubble to find a route around the mounds of wreckage strewn about the city, picking locks, sawing through chains, climbing ledges and ladders, and occasionally getting into a clumsy slap fight with a hostile survivor or bandit. It’s Prince of Persia, only with easier puzzles and the crushing knowledge that humanity is doomed to destroy itself. 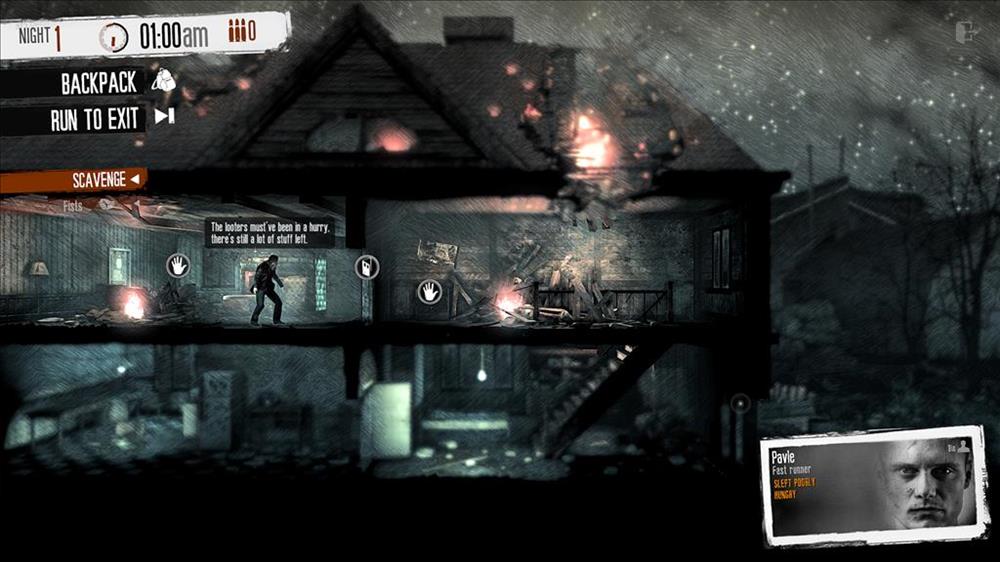 While I don’t think these light-action sequences would have been the game’s highlight on any platform, they are where the console port stumbles the most. When skulking around the war-torn ruins, its important to stay as quiet and out of sight as possible, which is why the PC version comes with a distinct “sneak” button. On the console, sneaking is done with a light touch on the analog stick. Lean on the stick a rabbit’s breath harder than intended, and the scavenger will burst into a full-out sprint. This would be annoying in its own right, but it is compounded by the awkward controls that make moving up and down stairs or choosing between opening a door and looking through the keyhole a chore. More than once I blew my cover dashing left or right while trying to get down a set of stairs, or accidentally throwing open a door after carefully scoping out the situation through the peephole.

The most interesting aspect of the stealth sequences is when you bump into other survivors. Everyone is on edge, and it’s easy for a slight misunderstanding to spiral into a frantic, fatal exchange. However, many of the survivors in the ruins are just scared and desperate people themselves not looking for a fight. Some will be willing to trade supplies, others will beg, some will puff up their chests and toss out threats only to fold when pushed back.

There is a wonderful sense of unease and tension in these moments. I was never quite sure who to trust and who to bash in the skull with a crowbar. With the permadeath stakes and the knowledge that my party waiting at home was depending on my scavenger making it back in one-piece, each time I ran into someone else was a minor crisis. The fear and uncertainty of living in a war-zone made crystal clear in one heart-skipping moment. 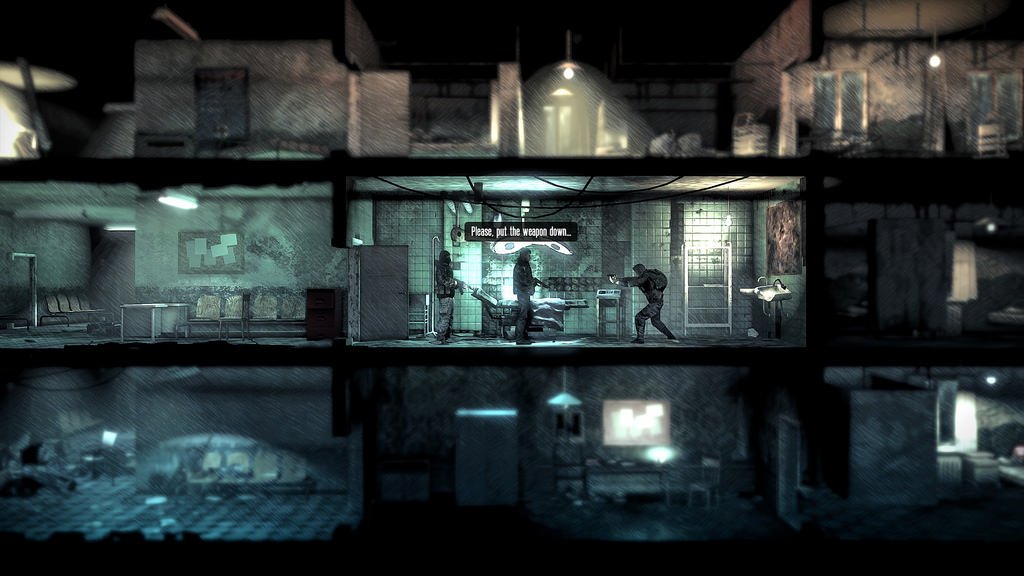 For a game subtitled The Little Ones, I was surprised how few children I saw in my first playthrough. Stuck with a trio of surly guys, the only time I saw a child was when a pair of brothers came knocking on the door begging for some medicine — the wartime equivalent of asking a neighbor for a cup of sugar. My guys refused. They were jerks (we’d already robbed another pack of survivors) who were out for themselves (and truth be told, they were pretty bad at that). Going by that slim interaction, one could be forgiven for thinking the expansion content was rather shallow.

Thankfully though, that trio soon succumbed to a combination of sniper fire and untreated illness and I started a custom-made scenario that included the previously mentioned father/daughter team of Iskra and Christo along with their friend Marko. This is when the game came alive for me. Call me a sucker, but it broke my heart watching little Iskra busy herself with a ball while her father frantically worked to assemble a make-shift stove so they could cook what little food they had. While the adults in the shelter typically wander around listlessly or flop down in a chair when not under the player’s control or assigned to a task, Iskra bounds and runs through the shanty with a convincingly precious childlike energy. 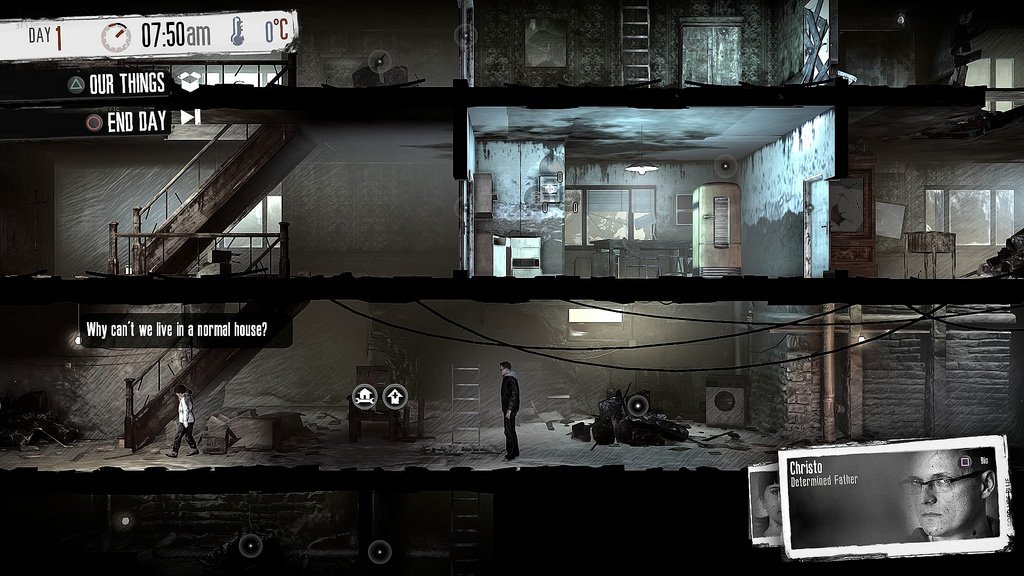 Having a child in the party raised the stakes in a weird way. When I was playing with the douche-trio, I didn’t have too many reservations about slipping into another shelter and robbing them blind, or turning away beggars and hungry mouths. With Iskra watching and learning from our example though, I cleaned up my act without even thinking about it. I worked harder to be more compassionate, organized the shelter around long-term strategies instead of sneaking into the night to rob what we’d need for tomorrow. Generally, I was a better person. I don’t think the emotional moments would have been nearly as effective without Iskra, making The Little Ones absolutely the best version of the game in that regard.

This is the part of the game I loved. When I genuinely felt pulled between a need to survive, and a need to live as a decent human. When the basically skill-less Emilia showed up needing shelter and we took her in despite knowing it might jeopardize the rest of the party. When I decided my team would never kill again and traded our bullets (worth their weight in gold) for medicine. When Christo spent an afternoon teaching Iskra how to run the rainwater collector so she could feel like she was helping the group. How the survivors would reflect on their actions, feel guilt for turning away the needy, or take solace in the fact that while they might be hungry, they did the right thing. Great little moments. I wish there was more of that game.

Sadly, most of This War of Mine is busywork. While I understand that it is intentionally subdued and dour, everything moves at such a languid pace that it borders on absurdity. I can list off some amazing, emotionally impacting moments, but most of my time was spent slowly watching meters fill and trying to wrangle survivors like I was herding cats. 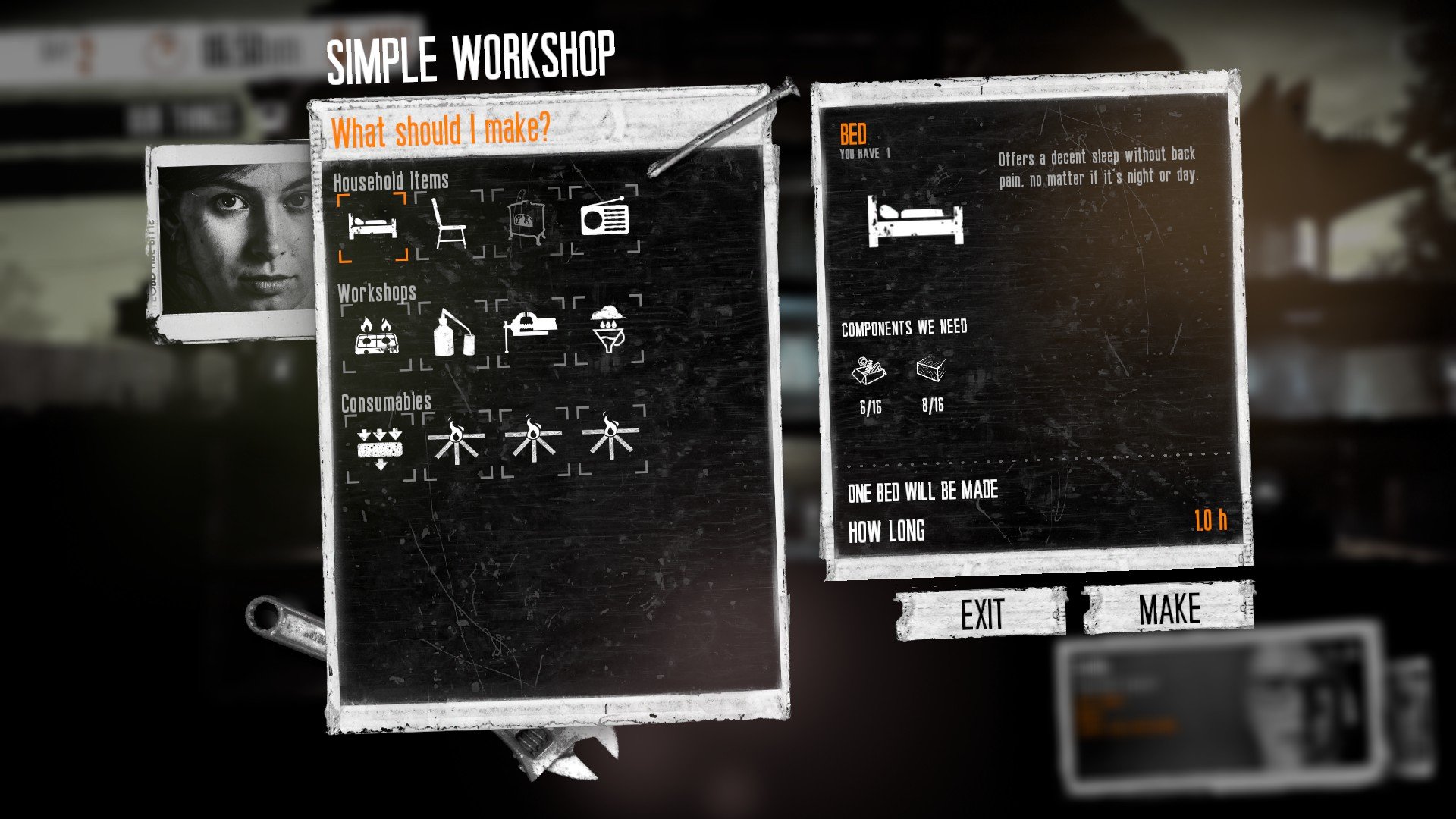 Something as simple as creating a meal requires no fewer than two menu interactions (three if you forget to burn fuel in bulk) and several 10-30 second pauses while a survivor pokes and prods at something as a meter fills up. Menus are made all the more difficult to navigate thanks to the microdot text in many tool-tips and item descriptions that were clearly not adjusted for living-room distances. The shelter is ridiculously large and wherever you need your survivors to be you can be sure they will almost always be at the other end of the house (don’t even get me started on the needlessly complicated and difficult to navigate apartment shelter in other scenarios). Get used to ponderously steering them through multiple hallways and floors for each and every basic task.

Problems with the basic controls compound how long and drawn out everything feels. Walking on stairs never got easier for me. Every single time it felt like I was trying to coax Simon Belmont up a flight like it was 1986 all over again. Simple, dumb things like selecting between interactions are a needless chore. More than once I almost accidentally chopped our beds to pieces with an axe while trying to assign a survivor to a nap, or told a wandering merchant to get lost when what I really meant was “Thank God you’re here, we have so many flasks of moonshine and hand-rolled cigarettes to trade for your desperately needed supplies!”

It’s clumsy and frustrating. The game wastes time on a regular basis, and then doubles down on it with the shopping cart controls. Nothing is more “fun” than being screwed over in a permadeath game because your character decided to suddenly dash right behind a rifle-wielding solider, or hit the wrong option and squandered a great opportunity to trade. 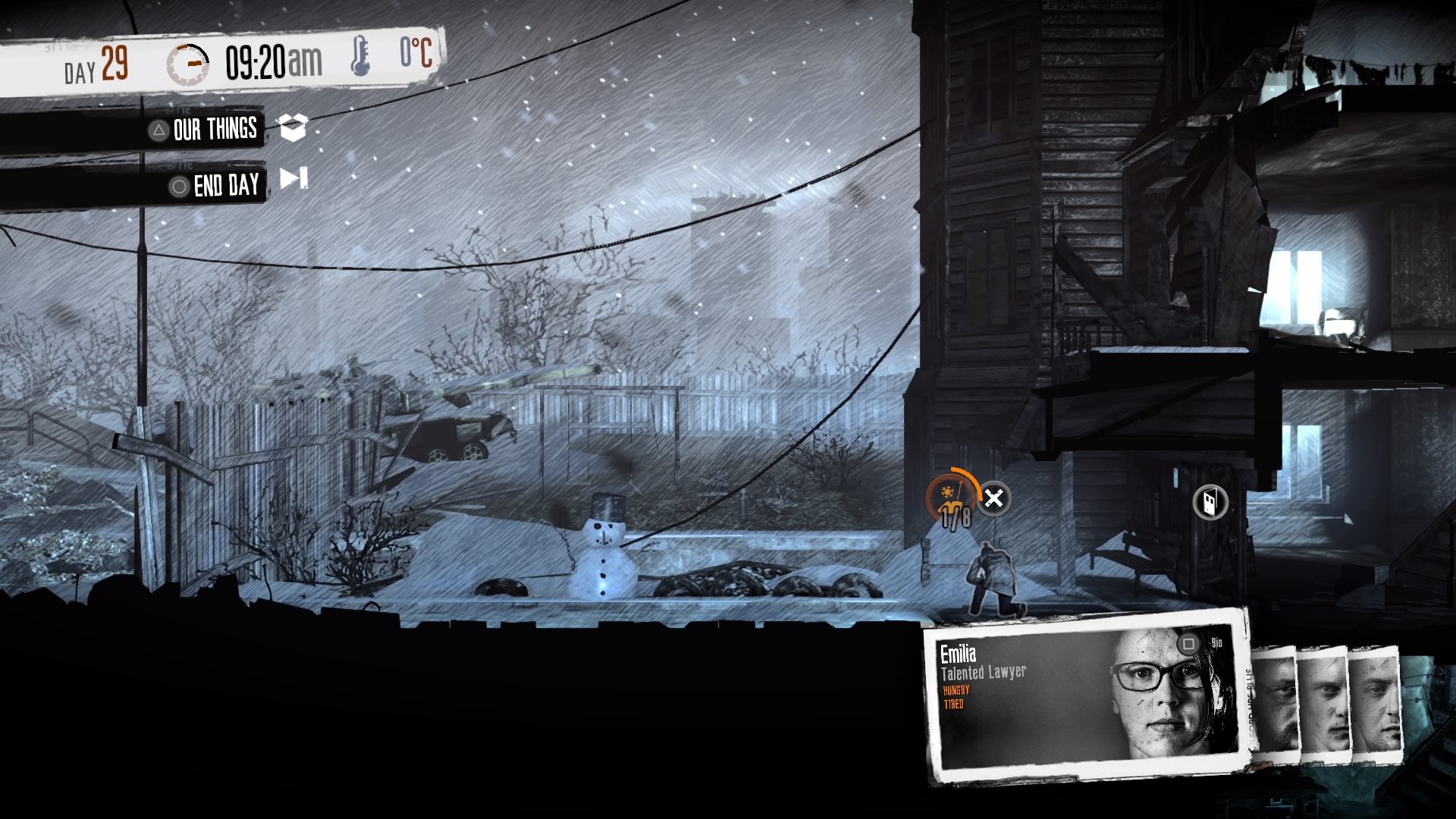 As an emotional experience, This War of Mine: The Little Ones is peerless. As a game, it’s a sluggish chore. To be honest, I’m having some trouble reconciling those two ideas. I want to recommend it because I really feel there is a powerful, necessary message at its core. A real pain from a creator who used the medium to demonstrate the horrors of war in a dramatic and gripping way. But, I also spent several nights this past week putting off this review because I didn’t want to deal with the clunky mess of actually interacting with it.

Saying “You should play this game, but don’t expect to enjoy it” makes it sound like homework. It’s homework of the human spirit that I think will enrich your life and broaden your horizons, but still homework. It’s up to you if that seems like something you want to take on.