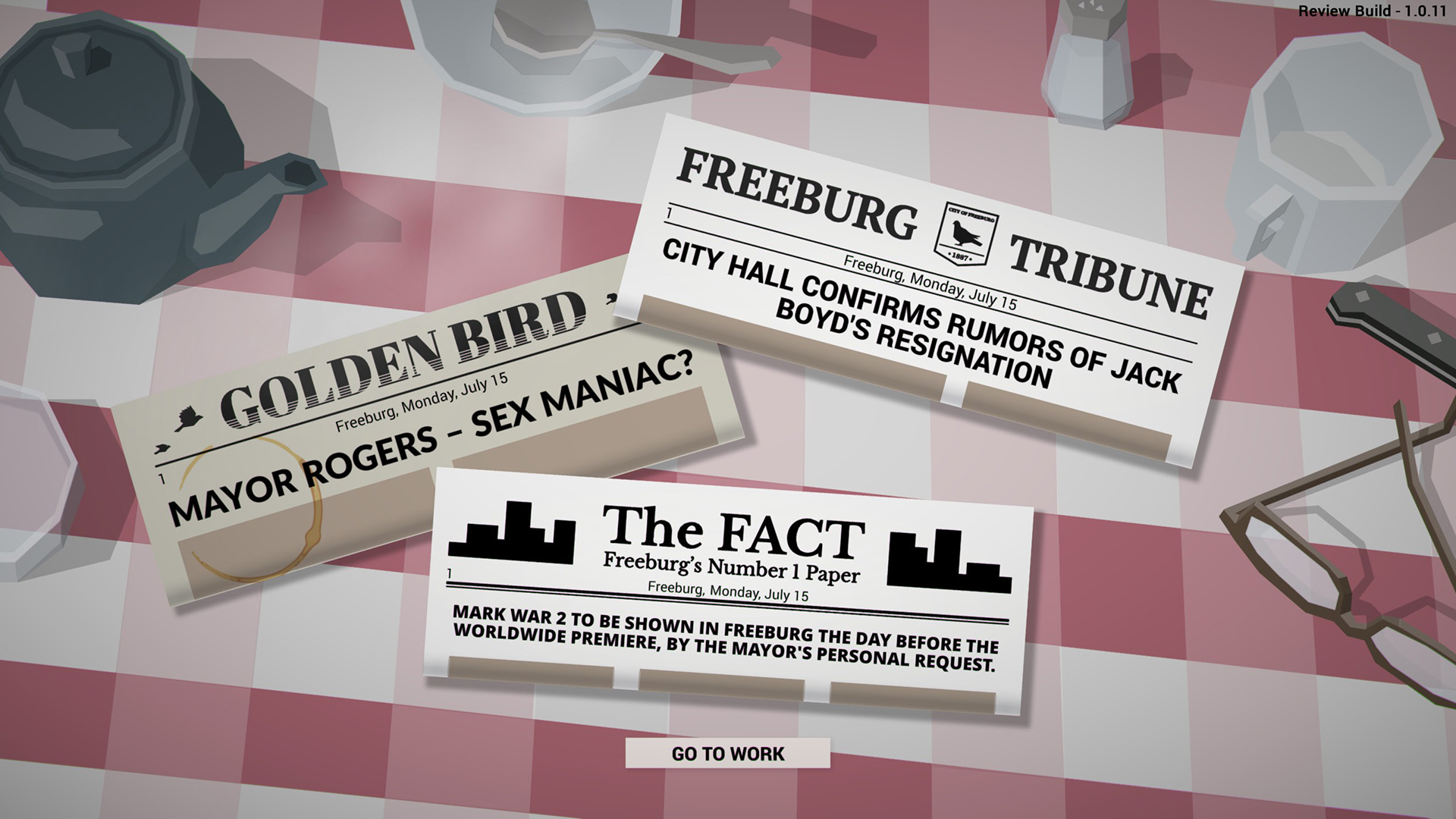 Despite having only previewed This Is The Police at PAX East just a few months ago, so much has happened in the US and the rest of the world in that time. It’s something that’s impossible to ignore when examining a game where you play as the Chief of Police in a city full of racial, gender, and sexual prejudice — where you make decisions every day that affect citizens of a fictional city.

With these same tensions rising in major cities across the world, it’s hard not to draw conclusions and insights from a game that surrounds itself with police duties in a city riddled with prejudice. 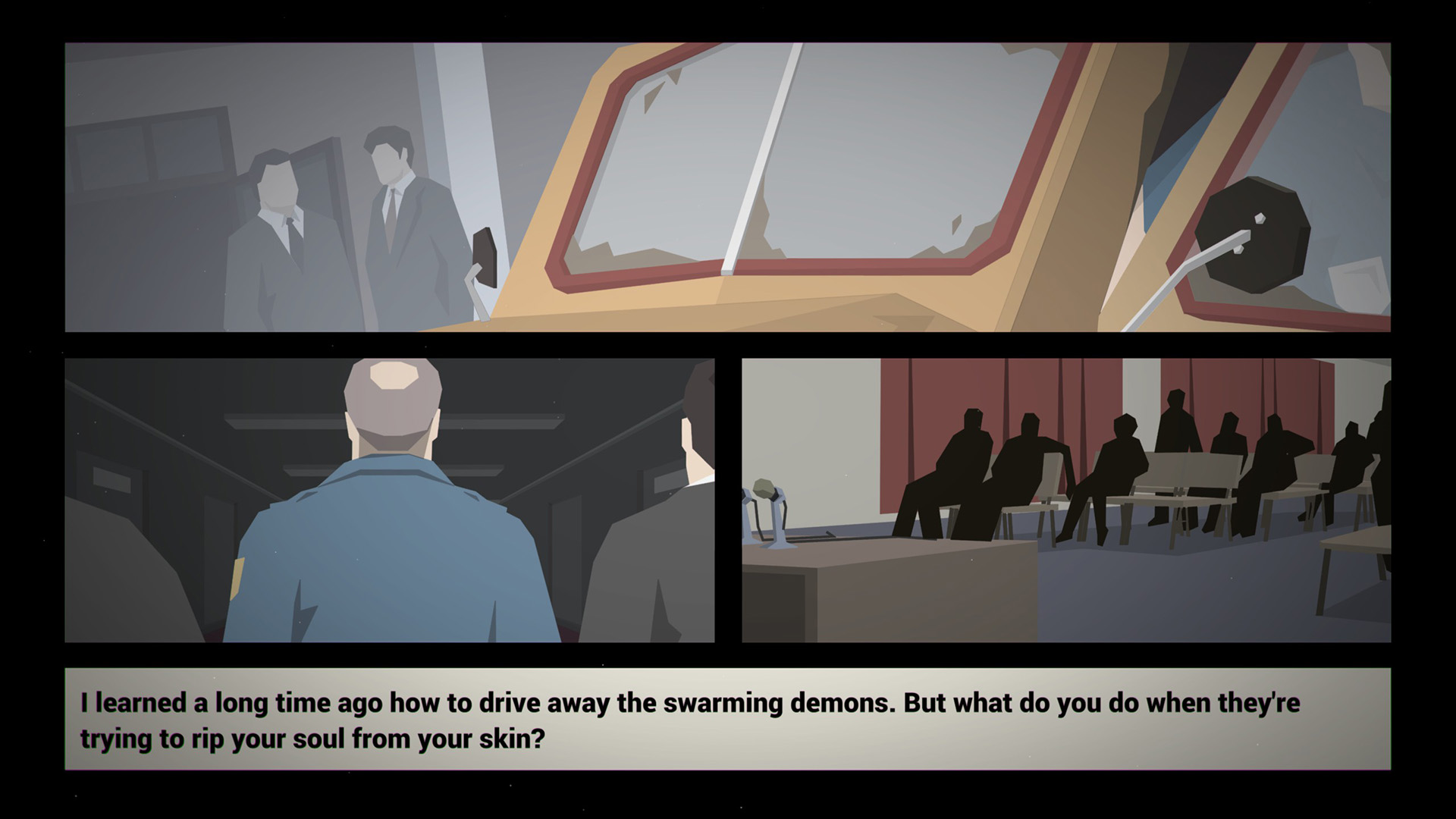 You play as Jack Boyd, a no-frills hardened Chief of Police who gets forced into an early retirement by a corrupt mayor. Jack, with no pension or savings to his name, has 180 days to scrape together half a million dollars for his retirement fund while balancing his duties to the people of Freeburg. This is done via completing daily shifts of directing cop activities around the city, assigning detectives to investigate crimes, and other requests and favors from city hall. A tally of what Jack has collected remains at the top of the screen as a reminder of how far he’s come, and how far he has left to go.

In between the daily grind, Jack’s story comes to life via comic book-style panels, voiced excellently by Jon St John. Every couple of days the player is exposed to Jack’s grim situation — namely his lack of a family life and forced ties to city officials and the mafia. At certain points, the player is able to make decisions about the paths he takes — for example, at one point in the game a mafia war breaks out and the player has to decide which gang to assist. These decisions don’t seem to impact the story too deeply but provides some slight investment in Jack’s tale. 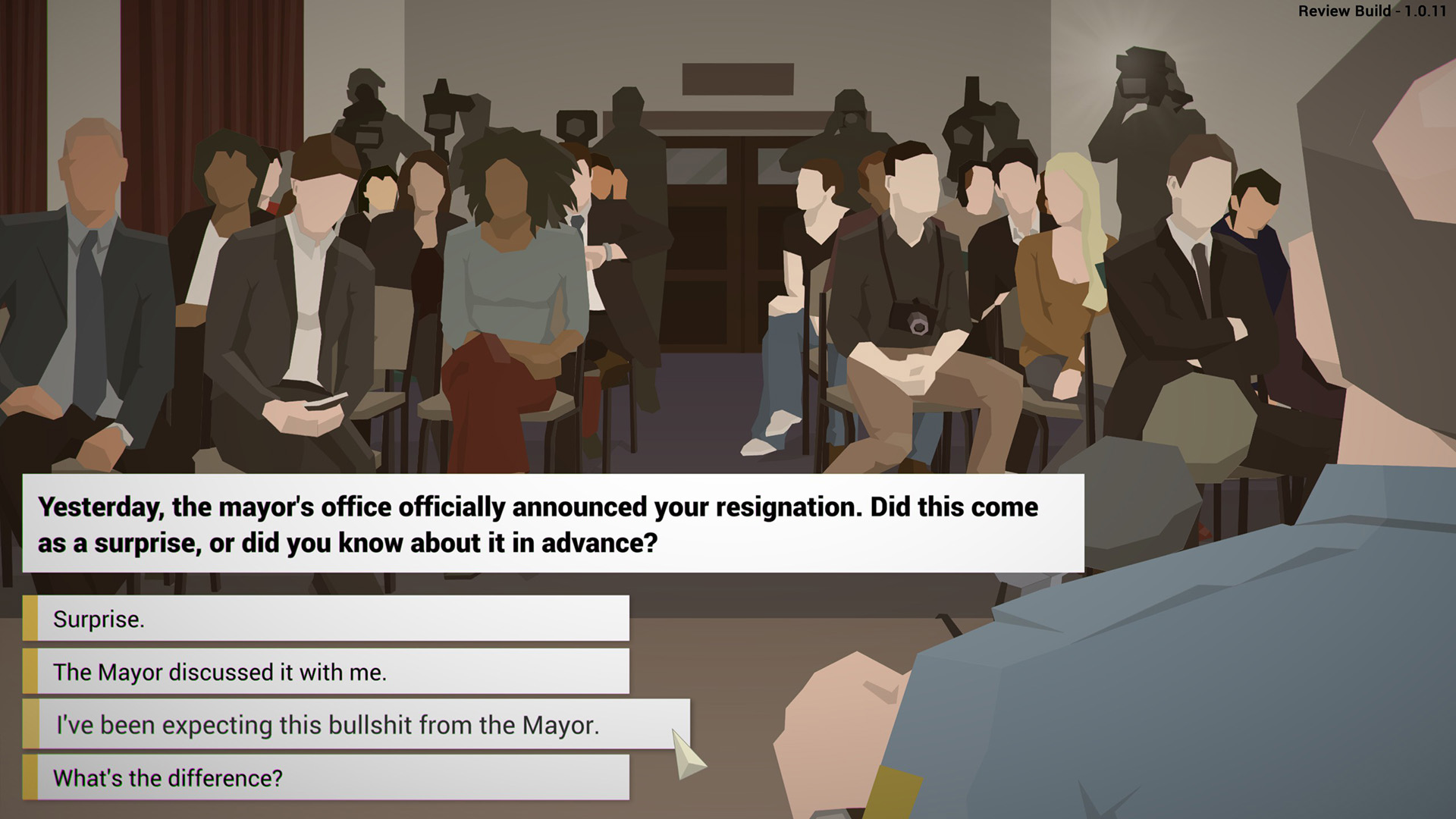 Before each day begins you’re given a roster of officers and detectives who are on shift that day. Employees can call in with various excuses, ranging from an ill family member to being too drunk, and it’s up to you to decide if you’re willing to let them go for the day. Having a slim police force prevents you from carrying through important tasks for city hall and the mafia, a careful balancing act that is nearly impossible to meet. The days run by quickly with mere seconds to send officers out to various assignments throughout the city, some nonsense and others deadly. It’s up to you to decide which ones seem legit, and how many officers to send. Your decisions affect the outcome, including whether or not your officers and civilians live through it.

Along with sending your force into various situations, you can assign detectives to investigate ongoing crime scenes. Investigations are a different aspect to the gameplay, requiring piecing together eyewitness accounts and placing pictures in the right sequence to nail down the suspect. In some cases you can partner with (or interrogate) suspects to get to the top of the criminal chain, which nets a huge chunk of cash from city hall. Investigations tend to last a few days, and provide a bit of a break from the mayhem of the daily grind. 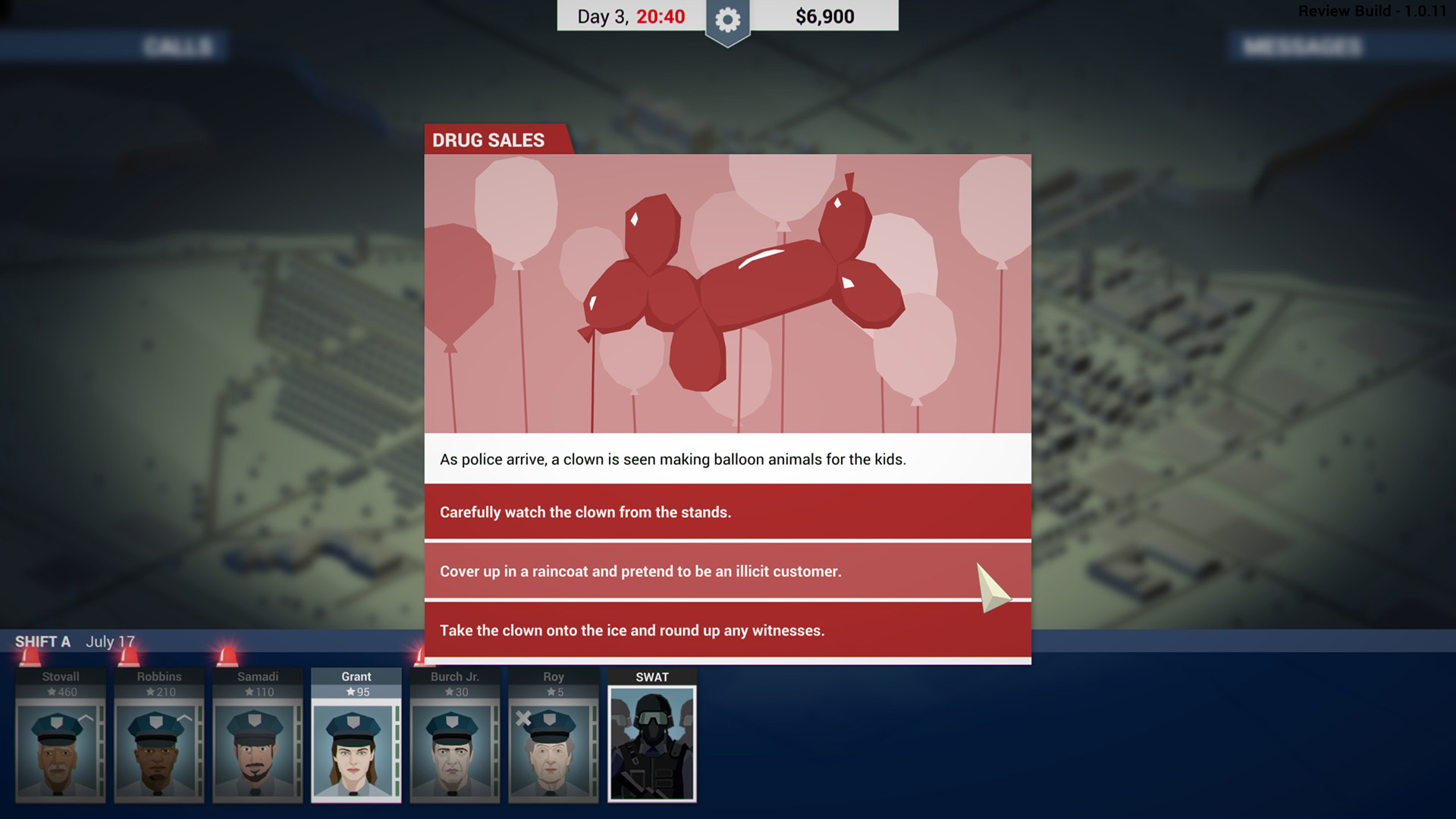 Throughout the day you can perform administrative tasks like hiring or firing your staff, making requests of city hall, and working out deals with the mafia, to name a few. Bizarre requests start to roll in from city hall where they demand for you to change your staff’s makeup (fire all of your black cops, make sure most of your staff is asian etc) or they may ask to pull officers in for an event. These requests are sometimes impossible to meet — for example I was told to hire more female officers at one point, despite the fact that there were no women for me to hire in the available candidate pool. Over time as you inevitably lose more and more officers, the demands become impossible to fulfill, making you lose favor with city hall rapidly.

Unfortunately, losing favor with the city means that you lose your salary and the ability to hire and keep more officers and detectives on staff, which are the crux of playing the game. There aren’t any ways to gain these things back, save for making requests to city hall every 7 days, which are inevitably turned down if you’re unable to fill any of their demands. In addition, if you slack off with the mafia too many times Jack can be murdered at random which is an instant game over. Because there is no counter-balance to this system, failure feeds failure, making it easy for the game to devolve into nothing. 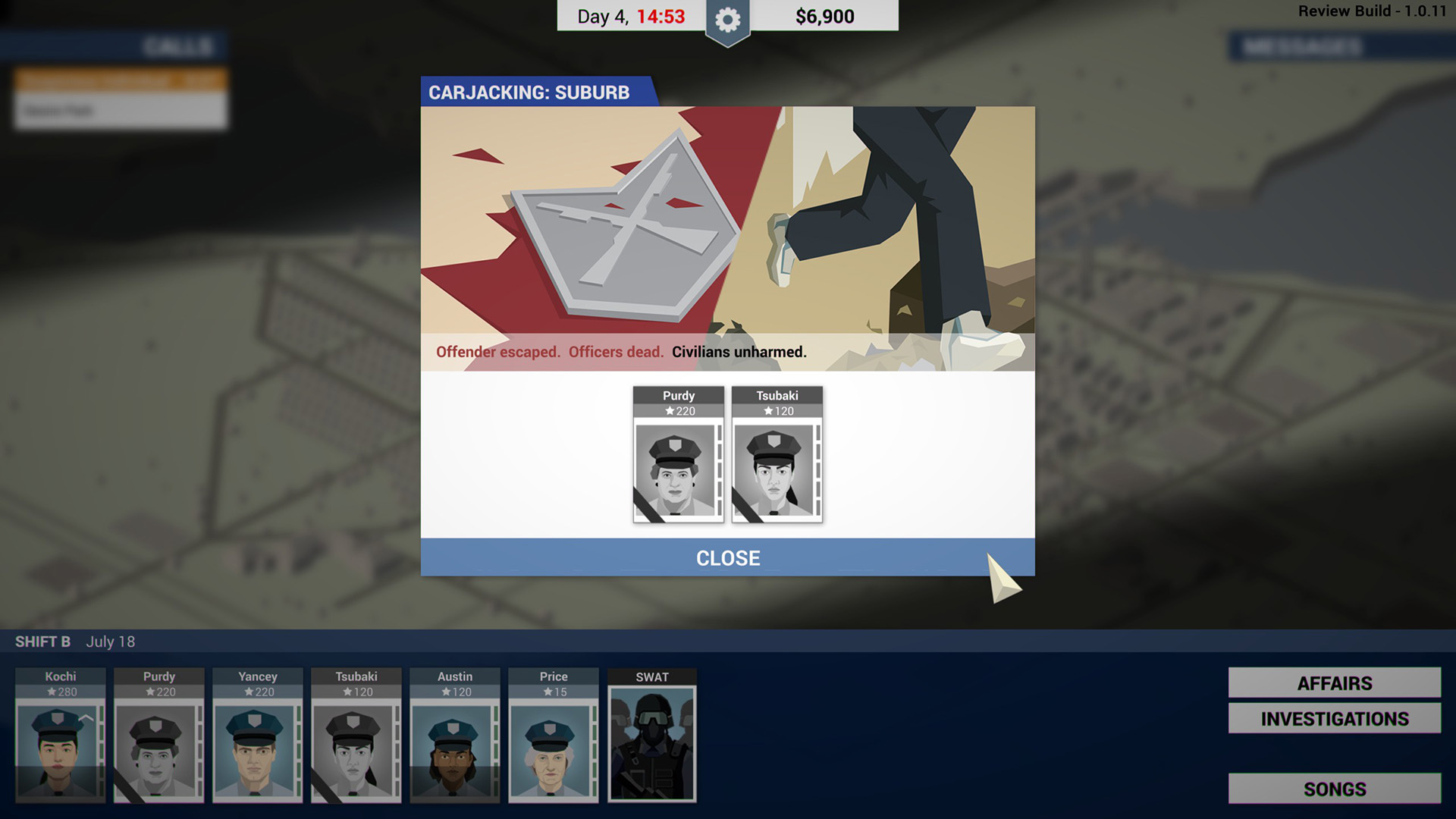 To add to the difficulty, as the game progresses, your officers begin to get cagey and refuse to go out on missions alone, or even with another person depending on the severity of the situation. Various other events pile on that inhibit you from doing your duties — officers can be randomly pulled into questioning, city hall can make you fire people, or your employees could just decide to up and quit. By the end of my playthrough, I literally wasn’t able to take any actions because I only had two people on staff, both of whom did not want to go out on assignments. Games can be reverted to weeks prior, but the function seems useless as the daily assignments aren’t randomized, so you’ll face the same difficulties day in and day out.

On the bright side, the style of the game is crisp with some nice touches to it — like the ability to buy records from a catalogue and play them while you’re running assignments. The main game takes place on a model city in Jack’s office, which has its own lighting and weather effects that simulate what’s happening outside. The story panels along with the excellent voice acting capture the character’s motivations and level of corruption fairly well, although sometimes the dialogue leaves a bit to be desired. A final bit of polish could also be used  — there are some typos throughout the game, like missing conjunctions or pronoun confusion. 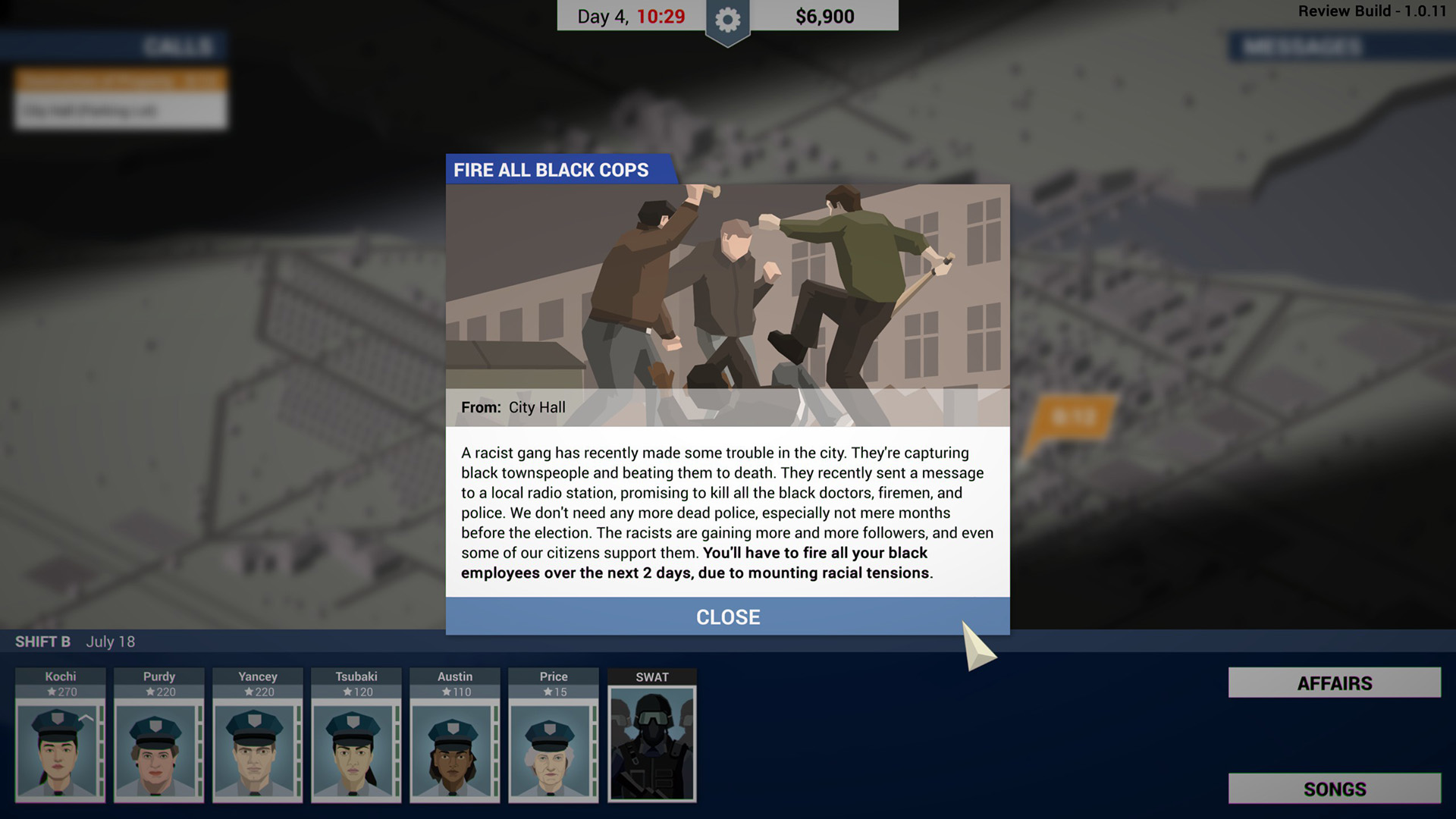 It’s unclear what, if any, social commentary is happening within the game. Various situations occur throughout the city that seem to be racially/gender/LGBQT motivated (for example, a citizen might call someone a “faggot” and try to kill them) but there’s really no thought or mechanics written into the situations beyond a few slurs. You can sometimes choose to not staff, or not use force against human rights-related protests, but beyond pissing off city hall there’s no resolution to these events either. Due to the recent events surrounding the US, the creators of the game made a recent statement that This Is the Police “is not a political game, but a human one.” Whatever their intentions, at its core the human essence that the game demands from itself — the ability to make moral decisions based on what’s presented — is missing.

With the imbalanced nature of the game, coupled with the lack of meaning, This is the Police becomes a tired game very quickly. The first 20 days are a fun experience, however after that point I felt dragged along with little direction or thought, almost like going through the motions. One bad random outcome can leave you with a squad of dead cops, which in turn sends you into a downward spiral with no chance for recovery. The game is in serious need of a rebalancing patch for players to be able to realistically recover and have a chance to actually play through assignments and investigations.

This is the Police presents situations that aren’t deep enough to invoke social commentary, yet it still takes the opportunity to arbitrarily throw them out in the open. It’s missing key storytelling elements that allow for that kind of messaging, and in the mundane yet slur-sprinkled missions those ideas fall apart. However with its interesting gameplay mechanics, pretty packaging, and plans for a sandbox mode it has a lot of future promise which I hope they deliver on.