What if the tales we were told growing up such as Snow White, Red Riding Hood, The Wizard of Oz, and so much more were actually all real? That these princesses and monsters exist, and their world neighbors ours? Now consider for a second an evil entity simply known as the Adversary. An evil so powerful that it has systematically taken over the world of all the fables, and those that were able to escape his tyranny have taken refuge in our world, the ordinary and mundane reality of human beings.

That’s the very quick and simply premise of Telltale Games’ next major episodic adventure, The Wolf Among Us, based on the DC Comics and Vertigo’s Fables graphic novel series. Don’t think for a second that these are all happy and cheerful Disney-like characters either. No, just like humans they’re all broken in so many ways. These characters of lore are doing all that they can to survive and to keep their true lives a secret. There’s crime, there’s sex, and more than anything else there’s death.

In particular, there’s a murder to be solved when a severed head of a Fable lands on the doorstep of Snow White and the Big Bad Wolf. 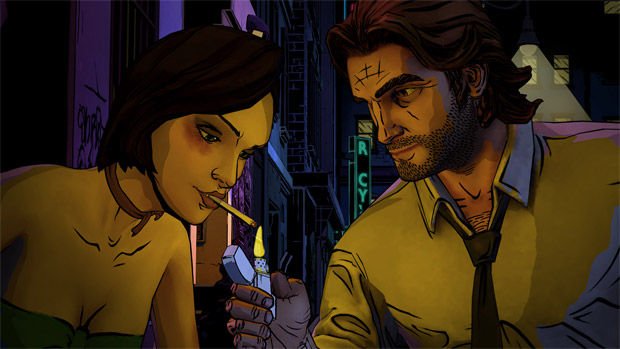 The first thing you need to know is that you don’t have to be familiar with the Fables comic at all here — The Wolf Among Us is a prequel set years before the events of the very first issue. The said, fans well versed in the series like myself will be in for some very jaw-dropping surprises.

You play as Bigby Wolf, also known as the Big Bad Wolf from the story of the Three Little Pigs and Red Riding Hood (it was the same wolf in both tales, who knew!) He may have been a bad guy in his past life, but everyone that came into the human world was given a clean slate and Bigby took this as his chance to reform. In doing so, he’s ended up as the sheriff to the Fable community located in New York.

It’s up to Bigby to watch over his flock of sheep as it were, and the beginning of the game has you on your way to the South Bronx sometime after midnight to investigate a disturbance reported by Mr. Toad. Upon entering the building you hear the sounds of crashes coming from a room upstairs, but more distressing at this exact moment is the lack of Glamor that Mr. Toad has on out in the wide open.

Non-human looking Fables that can’t transform into a human form like Mr. Toad have to sport a Glamor spell to make it seem like they’re human if they want to live in normal society. These spells come at a price, and those who can’t afford it are sent off to the Farm, a location far from prying human eyes where Fables can run around in their true form, but at the cost of being restricted to said farm.

In true Telltale fashion, you’re given an option of four dialogue choices when responding to other characters. You can be nice to Mr. Toad here and give him a pass, or be the strict stern sheriff and threaten Mr. Toad with the Farm. Interestingly, you also have an option to stay completely mute in largely all the dialogue choices.

How you interact with characters will of course affect how they perceive you, and they will remember your actions throughout the series. Unlike The Walking Dead though, I wasn’t too concerned in what anyone else thought of me. Whereas I wanted to be the best person I could be with Lee Everett, I embraced Bigby’s more cold and wild side. Whatever you decide, it doesn’t seem to have to much impact in this first episode. If there were any changes they were far too subtle for me to notice, and I’m hoping the episodes going forward really show players the consequences of actions more substantially.

After dealing with Mr. Toad, Bigby will go on to investigate the disturbance. He finds The Woodsman drunk out of his mind, attacking a prostitute — a Fable prostitute, no less. A fight ensues, and you’ll have to attack and counter The Woodsman by matching the quick-time event pop-ups. On top of the QTE fight, you’ll be given the option to shove Woodsman into a desk, a table, and any other objects that may help you knock him down.

It’s not a big deal having such options, however — it seemed like I eventually had to smash him into everything available before he finally settled down. Additionally, sometimes you’ll have to move your reticule to a specific body part on an opponent in order to attack. Moving the cursor is a bit of a challenge to mimic a struggle, but that said you don’t have to exactly line up anything — just be close. 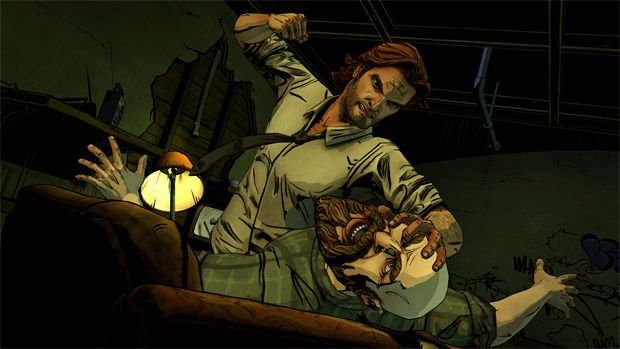 The fight between the two gets pretty brutal, but one of the many perks of being a Fable is that you’re near immortal. It takes an extreme action to kill someone, and one such way we learn is by decapitating someone. Snow White, a key figure in helping maintain Fables in New York, discovers the severed head of the prostitute players meet earlier and this is when episode one of The Wolf Among Us switches gears and becomes a detective-like game. It’s up to Bigby to investigate the murder, and to discover what’s going on.

After doing some digging you’ll discover who the prostitute really was, and that she happens to be married to another Fable. As you make your way to interview the husband, Mr. Toad calls to tell Bigby that there’s another disturbance occurring in his apartment building.

This is where things stray from that of The Walking Dead‘s formula as you now have a choice: Go to the husband first or go to Mr. Toad first. Picking one over the other will net different results and consequences, as the time of day is factored into the game. It was in this instance (and another similar one near the end) that I really felt the weight of my consequences, as opposed to my dialogue choices.

I went to the husband first, and as it turned out I wasn’t the only one searching for answers — another Fable breaks into the place. Confronting the intruder sees him running away, which triggers a rather intense and fun chase sequence. There’s some QTE elements as you have to dodge obstacles, and there are diverging paths that may allow your target to escape if you choose wrong. 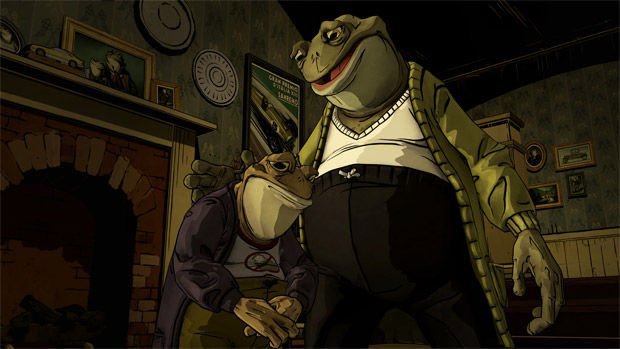 After all this, I went to see Toad again and for some reason he’s trying to hide something. You notice he’s hurt, and his son has been crying too. You’ll have to go into his apartment, investigate the scene, and try to catch Toad in a lie in order for him to confess the truth. This sequence was extremely fun and really made me feel like a detective. The dialogue choices have a very short time limit so you really have to be on top of your game when interviewing suspects. Telltale, I want way more of this in the future episodes.

In terms of the story content, I largely described the first half of the two-and-a-half-hour experience. The latter half gets pretty intense, especially the closing shot that will totally stun fans of the comics. Again, newcomers don’t have to know any backstory from the comics — a general appreciation of fairytales will do just fine. That said, I’m coming at this as someone who’s kept up with the comics, and while I was able to keep up with a lot of what was going on, I’m afraid it may be too much for newcomers to take in everything that’s happening. There’s a lot of lore, characters, and different settings all thrown at the player that may be too much to consume all in one go.

On this note about the story, with The Walking Dead I committed myself to every choice I made, even when I was horrified with the results. I didn’t want to change anything though, and ultimately I didn’t care at all what the other possibilities could have been. With The Wolf Among Us, I find myself wanting to replay it just so I can see all the different possible results. That’s not a knock on the game mind you, just that I didn’t really feel the weight from my choices over the course of Faith apart from having to decide what locations I would go to first. 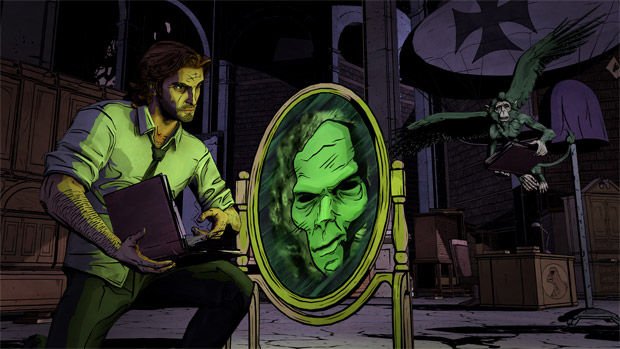 Gameplay mechanics are again largely the same as other Telltale games. You’re selecting clickable objects to either look at them and state something, interact with them, use them, or store them in your inventory. You’re free to control Bigby directly, or you can click at a specific location on the screen to have Bigby move there automatically. One new thing compared to old games is that you can now speed up his movements by holding the right trigger (on an Xbox 360 controller), so the pacing feels a little better when not talking to characters.

The visuals are a sight to behold with their vibrant and bright coloring. It’s the best looking Telltale game to date. That’s not to say it can contend with the visuals of AAA titles, but what it lacks in extreme realistic detail it makes up with its wonderful high saturated color palette to bring a real unique sense of life to this world. It’s also very complementary to the wild setting of the game, with its odd and wild cast of mythical characters.

The Wolf Among Us is an overall a good start to Telltale’s next episodic series. There’s a lot on offer here for fans of Fables, but I fear there’s a bit too much happening that would scare off newcomers with episode one. Whether you’re into the lore or not though, one thing is for sure — the few moments where I got to be more detective than brawler were an absolute joy and I sincerely hope this is given more of a spotlight in the rest of the season.