Stop me if you’ve heard this one before: A young adventurer washes up on the shore of some mysterious land—perhaps an island under the curse of a wicked magician—and winds up battling evil to save the day. Sound familiar? It should. And if that’s the case, then don’t expect to be surprised by first few minutes of The Swords of Ditto. But keep playing, because what at first seems like a trite take on a well-worn concept reveals itself to be a charming-as-hell game with a voice and style all its own.

The Swords of Ditto is an easily-digestible action game distilled through the lens of youthful adventure. It’s warm and funny, with adorable characters and an imaginative world that feels like the playable version of a Saturday morning cartoon; this is a game that will make you smile plenty of times. 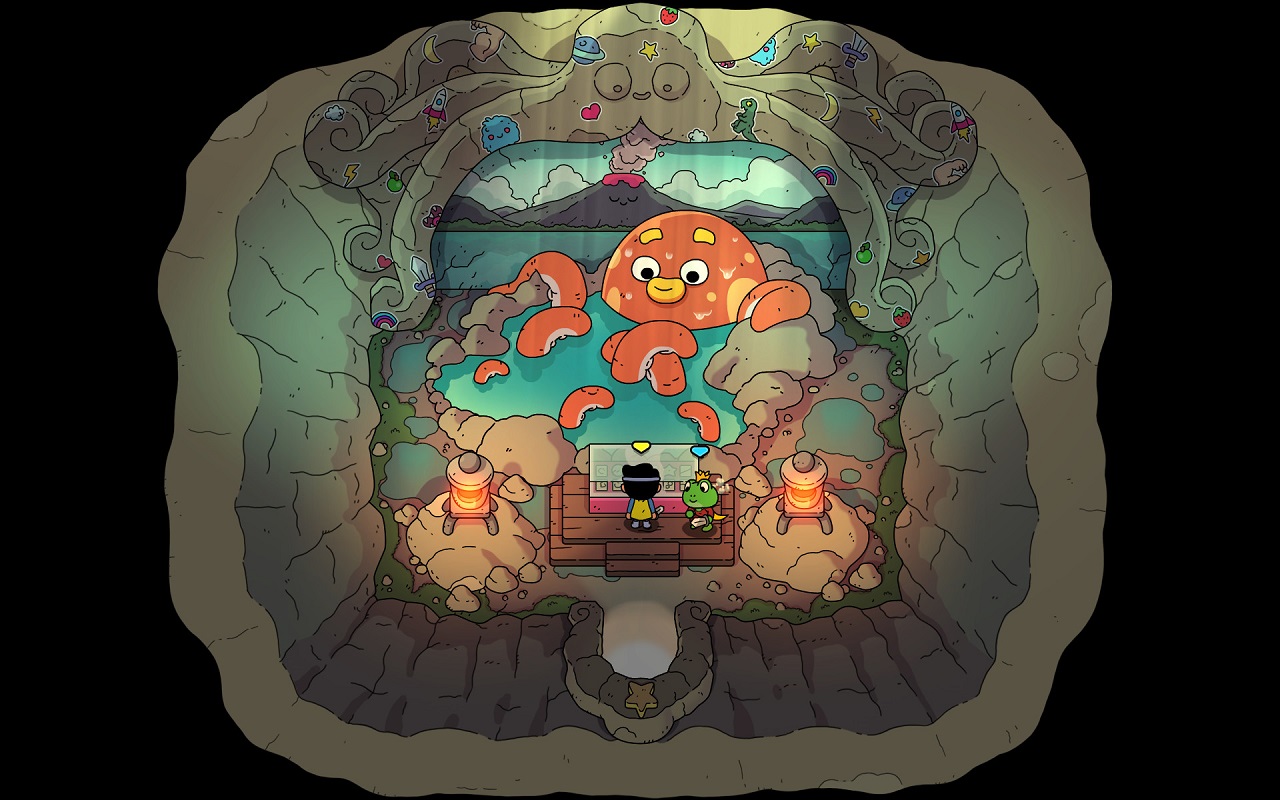 While Ditto‘s opening notes aren’t exactly groundbreaking, it’s quick to introduce a rather novel spin on things. Mormo, a wicked witch with powerful magic, holds a once-idyllic nation in a stranglehold and only the fabled Sword of Ditto can put an end to her reign. Throughout the game, you’ll play as descendants of the first Sword, carrying up your predecessor’s mantle in an attempt to succeed where they failed. You’re never really the One True Hero in The Swords of Ditto, the sword you wield is, and that setup allows the game to play with convention across multiple playthroughs.

One of Ditto‘s biggest draws is the game’s generation-spanning story. Mormo’s powerful, and it’s difficult to put her down for long. Every 100 years — should players vanquish her or meet an early grave — the magician returns and a new Sword must take up arms. The outcome of previous attempts to stop Mormo ripple outward, affecting subsequent adventures in a handful of ways. Locations like the central town, for example, will be in better shape on a second playthrough if the last Sword managed to defeat Mormo. Or conversely, villagers might be rude to the new Sword if the last few champions screwed up and doomed the world to a few hundred more years of darkness.

And with that evolving framework, The Swords of Ditto‘s randomized gameplay makes sense. While it’s not uncommon for smaller-scale projects to use procedural generation to keep players invested, the hundred-year gap between Swords allows the game’s ever-changing landscape to function as an agent of myth. Heroes fail, but life goes on. And over the course of a century, the world looks different. The Swords of Ditto employs rogue-lite design brilliantly; your objective is always the same, but the people, places, and equipment you encounter change just enough every single time.

Every Sword’s ultimate goal is stopping Mormo. It’s typical Hero Work, but Ditto’s youthful vibe and hand-drawn art speak to an adventure carried on the lighthearted airs of whimsy. An ethereal dung beetle guides the Sword, directing them towards dungeons that house anchors which, if broken, weaken Mormo’s grasp. Villagers speak in quirky tones, ushering the Sword on sidequests and offering cutesy advice. Even players’ stats are improved in a silly manner — by slapping stickers on your gear that unlock abilities and increase passive bonuses. If nothing else, The Swords of Ditto completely commits to its aesthetic, creating a world that’s as adorable as it is enjoyable to explore.

Playing through The Swords of Ditto is an exercise in expressive gameplay. Players only have a few days to stop Mormo, either four or seven, depending on the selected in-game difficulty, and you’re mostly free to use the time as you see fit. You can try and topple Mormo immediately after taking up the Sword, but it’ll only make the things more challenging. Conquering Toy Dungeons not only weakens the magician’s powers but also rewards adventurers with useful new equipment. Each tool — or Toy — is valuable and imaginative, like a mighty golf club to knock enemies away or a disembodied monster foot that stomps on unsuspecting foes.

The Toys supplement adventuring staples like bombs and a torch, ensuring that Swords are prepared to topple whatever challenges they face. And it’s a good thing too, because every dungeon on the map has random modifiers that can add to the game’s difficulty dynamically. The combination of varied stickers and unique toys makes wandering across the world a delightful prospect; experimenting with different combat strategies and scouring environments for secrets remains entertaining from minute one to hour five (or later). 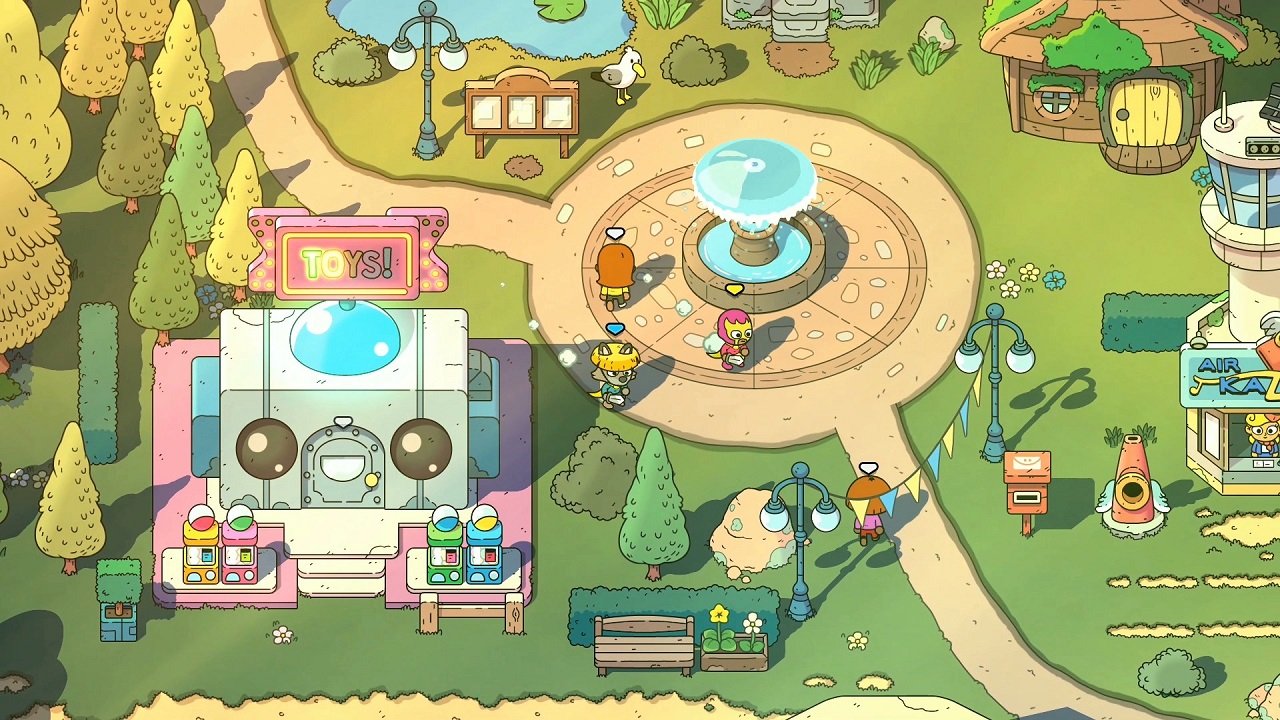 In addition to providing a single-player romp, The Swords of Ditto also offers local cooperative gameplay that allows multiple Swords to team up and challenge Mormo.

The Swords of Ditto is charming, humorous, and fun to play. It’s not the biggest game, but its generation-crossing story makes you feel like you’re a part of its world’s history. Even though it relies heavily on randomized components, the cartoon-like presentation and baked-in charm make every single screen seem as though it’s part of a cohesive, authored map. The Swords of Ditto might not be the most epic adventure of all time, but there’s little denying that it’s one of the cutest.