Laika was a female Soviet dog, and the first mutt in space and to orbit the Earth. Laika was never intended to return. She died during her orbit, and her remains burnt up as the Sputnik 2 re-entered the Earth’s atmosphere and disintegrated. 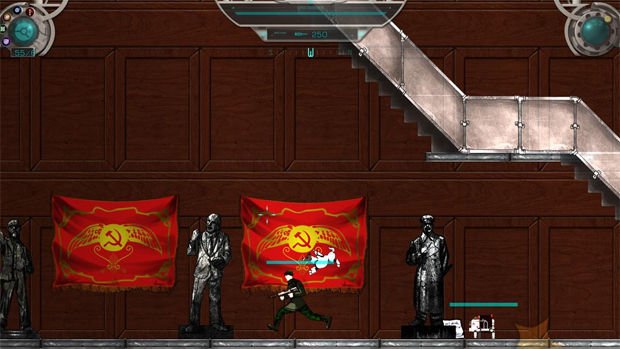 Laika is back, baby. She’s on Earth and she’s ready to kick some Soviet booty. Only now, her time in space has taught her a few things. Namely, how to be part robot and attach weaponry to her cyborg-dog body in order to blast the Soviet scum back to the labor camp they came from. Alright, so the game paints the story a bit different and with a way more serious tone, but this is what I came away with.

The story unfolds through both cutscenes and notes found in-game. There’s a lot to take in when reading the notes, diaries, and personal logs scattered around literally everywhere and it can get overwhelming at times. The plot gets pretty intriguing, but only if the player is dedicated to reading each little thing they come across. If not, little to no semblance of a plot will be found.

Gameplay take the shape of a 2D action-platformer. When using a keyboard and mouse, movement is mapped to the WASD keys and the firing reticule is maneuvered with the mouse. Laika begins with her own version of the Mega Buster which can be charged for bigger shots and has infinite energy, though firing too much in succession will cause it to overheat.

She also has a shield, which will absorb incoming damage when active, however Laika cannot fire and have her shield up at the same time. The last trick up Laika’s sleeve is her ability to hack into electronics. Doing so triggers a “minigame” which consists only of stopping a moving line within a certain area, which is quite uninteresting and almost always painfully easy.

In fact, uninteresting is a good way to summarize the game’s gameplay as a whole. There’s nothing inherently wrong with the gameplay in The Sun at Night, but it’s just so bland. Nothing really has any weight to it; killing enemies, even bosses feels empty, jumping around feels stiff, and weapons have no real impact when fired. Despite being controlled by the player, it feels as if all the action on screen is very separated and distant.

During the course of her journey, Laika will pick up other ammo-based weapons like a shotgun, laser beam, and machine gun. All of these weapons, in addition to her shield and Laika herself, can be upgraded by collecting Nano Batteries. There are a wide variety of upgrades available, allowing for each player to tailor Laika to their playstyle. For example, I found myself rarely using the shield, so I increased raw defense, speed, and then went all offense. The Nano Batteries are found by killing enemies and exploring, and are placed efficiently enough to always give the player a nice sense of personal progression.

Speaking of exploring, there is plenty of exploring in The Sun at Night’s non-linear maps. These maps are often huge and also confusing. Since everything is on a 2D plane, the map takes some getting used to. It took me a long time to grasp how the map screen worked, and then more time to actually understand it. 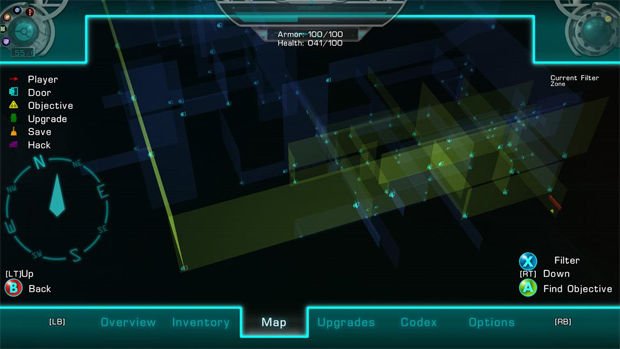 Since the maps are so big using only 2D planes, it’s easy to get lost, even with the map, as rooms on the map are unlabeled and it’s up to the player to remember what was where. Fortunately, there’s a navigation arrow that will point the player in the correct direction. Unfortunately, it’s unreliable.  During the first real mission, I was feeling overwhelmed and turned the navigation arrow on. It was working well enough for a while, but eventually always led me to a locked door. I killed all the enemies in the room, looked for a console or something to hack, but found nothing. One other door put me face-to-face with an enemy that killed me right away, and the third door was a dead end.

What I ended up doing was completely ignoring the arrow, taking a different way earlier in the level, clearing the bad guys that killed me instantly through the second door, and then finally being able to pass through that door later in the level as the narrow pointed me in the opposite direction. The thing is, I believe the navigation arrow will always point to the shortest possible route, even if it is actually impossible to use. I’ve had this happen a few times and it’s incredibly frustrating. It forces the player to rely on the confusing an unlabeled map instead of the confused and misguided navigation arrow, making navigation quite the chore. There’s even times when the navigation arrow doesn’t work, intentionally, forcing the player to search high and low for one or two items to interact with in order to advance the plot.

Dying can happen quickly in The Sun at Night, depending on how the player customizes Laika. Certain hits from certain enemies can take a huge chunk of health away, forcing the player to be very vigilant about their health bar. The indications for having dangerously low health are a sound effect and a blinking health bar. These don’t sound too bad, but if you’re playing with the sound off (more on that later), it leaves the already difficult-to-see health bar as the only option. I died quite a few times simply because I had no idea my health was so low or that an enemy would take a third of my health away all at once.

The game uses save points, which really means two things: it is impossible to save whenever you want and dying means re-playing parts of the game you have already played before. Remember that part about the misguided navigation arrow? Each time I died from the second door or otherwise, I had to replay about 5-10 minutes of gameplay just to get back to that section. It’s a design decision, and one that I don’t agree with in this case. 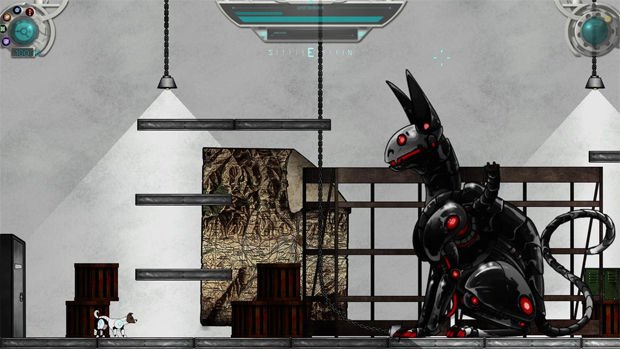 If there’s anything that The Sun at Night truly nails, it’s the art and animation. It’s all hand drawn and looks amazing. All of the animations are just so smooth that it is hard not to stop and watch. Enemy design, when they’re not of the humanoid variety, is also great. Cutscenes look simply superb and fighting cyborg bears and tigers never seems to get old. The stage art, however, is hit and miss. Most of it is fine, but a lot of times the impassable terrain is just black nothingness instead of being…anything. The sound design is another story, however. Music and sound effects feel generic and repetitive, which becomes a cacophony during bigger battles, with no one sound or track standing out (influencing you to turn it off due to boredom).

There are a handful of bugs present, though most are minor. Enemies will have death animations loop on rare occasions and sound effects can become “stuck” and persist across screens. The game also crashed on me three times in total, which again forced me to replay around 10 minutes of gameplay due to the limited save points.

The Sun at Night is billed as the first part in a three-part series. While this isn’t the most magnificent of starts, many of the issues I have with it can be fixed. The art and customization are really the game’s strong suits, so hopefully Minicore studios can bring the rest of the package up to the standard set by those elements. Regardless of my issues with The Sun at Night, I’m looking forward to continuing Laika’s journey.