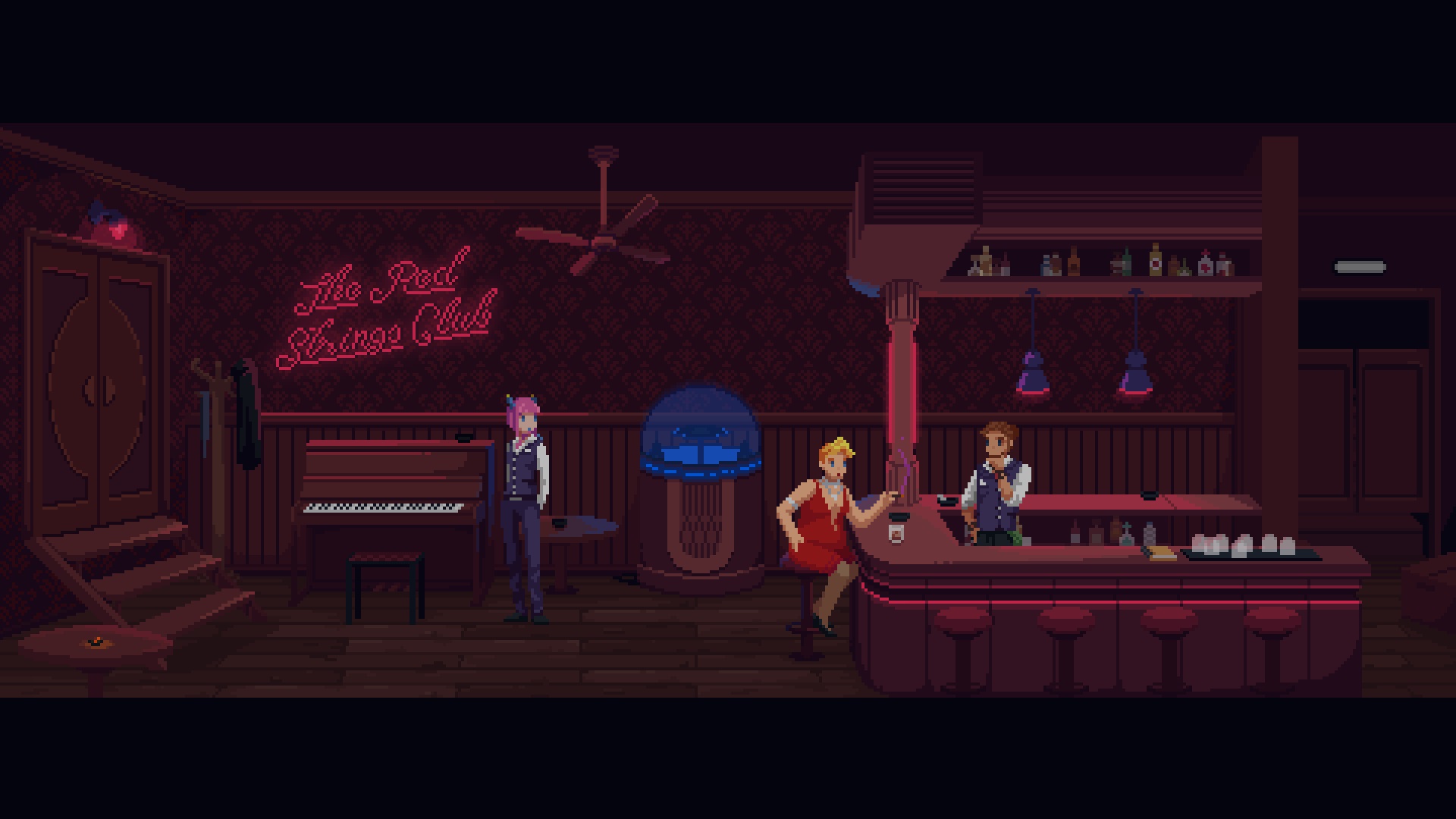 Brandeis is plummeting towards the ground. It’s silent as he falls; the city he worked so hard to save has gone to sleep, blissfully unaware that the hacker will meet his end face-down on the pavement. Though his life will be over shortly, Brandeis remains calm. He accepts that this is his destiny, and instead of meeting it with anger or fear, he just wants to know when, exactly, he sealed his fate.

But while the fall is the end of Brandeis’ story, it’s also where The Red Strings Club begins. Its first scene is one character’s final moment, and the rest of the game explores just how it all came to be.

Deconstructeam’s sophomore effort is all about choices and their consequences. The Red Strings Club blends cyberpunk aesthetics—cybernetic implants, mega-corporations of a questionable caliber, and bartenders who double as information brokers—with a deftly-written script to make a game that has both style and substance.

In the near-future, Supercontinent Ltd. is at the forefront of a technological revolution. Its various implants have changed how humans function on almost every level. Social media stars flock to Supercontinent’s augment centers, seeking enhancements that boost their charisma to new heights. Anxious entrepreneurs vying for funding utilize implants to bolster their business savvy. With Supercontinent’s help, humans fire on all cylinders with ease.

Something’s amiss, though. The Red Strings Club has players working to unravel a conspiracy surrounding the company’s latest plan. In a few days, Supercontinent will launch a program called Social Psyche Warfare: a modification that essentially eliminates fear, anger, and depression from the human condition with the click of a button. It sounds great in theory, but as Donovan, the implant-less proprietor of The Red Strings Club bar learns, SPW will launch in silence, without the consent of those it will affect.

And it’s at that moment that Donovan, his partner Brandeis, and a sentient android with unmatched empathy named Akara-121 set a plan in motion to stop the company at any cost.

The Red Strings Club weaves narrative-heavy segments and player-driven investigations to explore fate, what it means to be happy, and the invisible ties that bind people together. It’s full of difficult choices and unexpected consequences. Every decision players make on their path toward its conclusion has repercussions—both subtle and explicit—that shape how the story unravels. 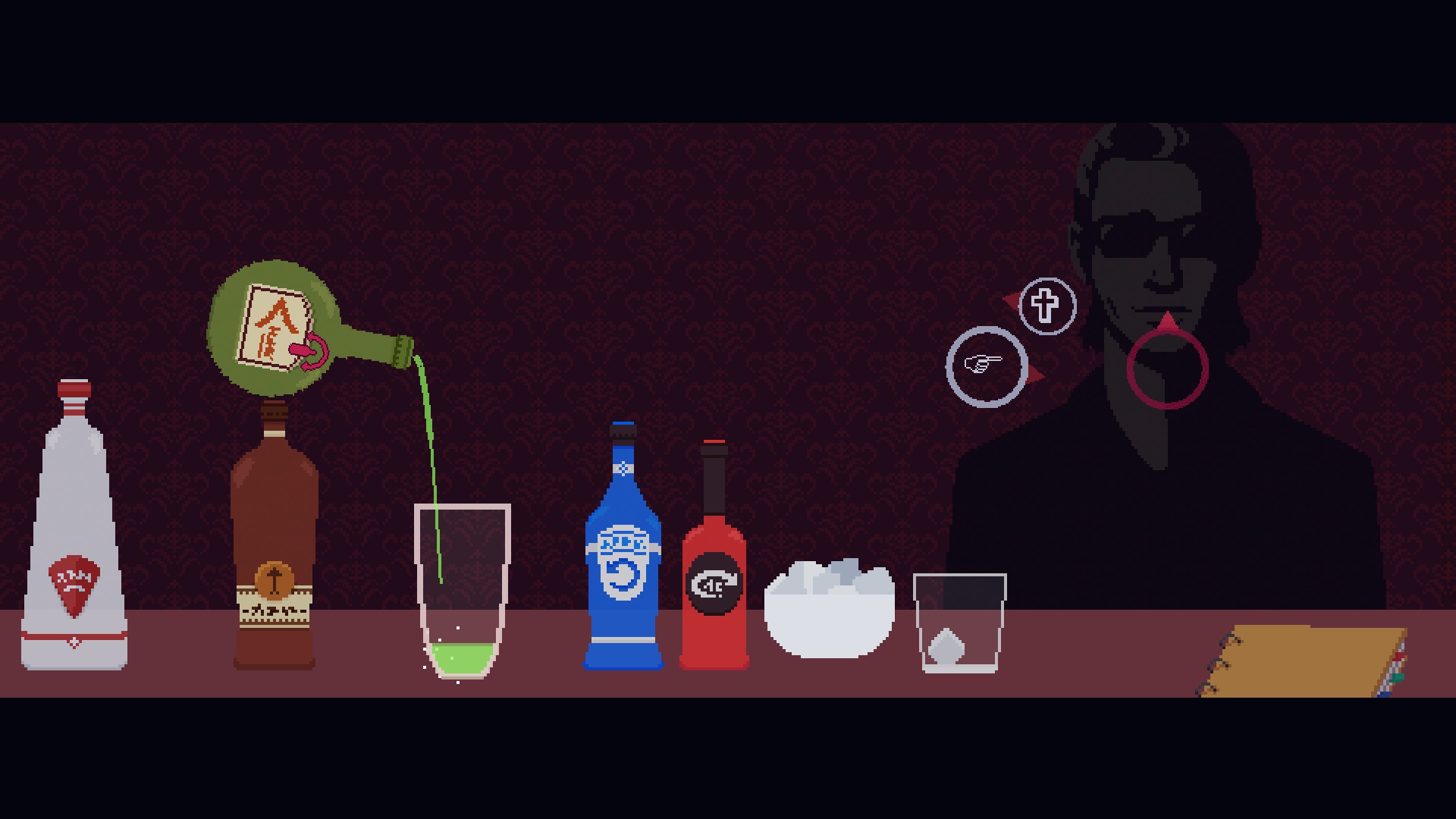 It all unfolds through unique gameplay segments. Each of The Red Strings Club‘s main characters uses their various skills to gather information and enact change. Donovan, for example, deals in secrets. As a bartender, he uses a special technique to read patrons’ “moods” and serves them a drink to match how they feel. By mixing liquors, Donovan can appeal to a narcissist’s ego with a cocktail that puffs them up. From there, he uses both the booze and their emotional state as a lubricant to poke and prod for useful information about Supercontinent’s inner workings. Later on, Brandeis flexes his hacking skills by impersonating employees and manipulating others in what boils down to a high-stakes, corporate espionage spin on telephone tag.

These sections bolster a game that’s written to pose difficult questions. Matters of personal philosophy, determinism, and what it means to be “right,” punctuate conversations. The Red Strings Club has a knack for muddying what seems to be a crystal clear issue. Snappy dialogue between characters easily flows from generic cyberpunk rambling to serious ethical debates. In one instance, players can select what “ailments” they’d like SPW to remove from society. It’s presented as a purely hypothetical situation from the get-go and seems relatively innocuous. Eliminating hateful speech and violent crime makes sense, after all. But upon answering, the game is quick to poke holes in your logic. It argues that bending society’s rules based on what any one person thinks is hypocritical. Donovan and company’s mission, after all, is to stop a program that intends to brainwash the population. Is cherry picking issues to address any different?In moments like this, when The Red Strings Club isn’t afraid to hold a mirror towards the player’s beliefs, the game shines.

Similarly, seeing the way that your decisions ripple outward and affect other parts of the game adds a sense of weight to every scene. During important narrative beats, points on a dot matrix are filled in. It’s fascinating to see how one choice leads to the next, visualizing moments into a tangled web of interpersonal drama. Though presented plainly as some dots and red lines, the system serves as an important reminder that even though life often feels disjointed, everything we do is connected in one way or another.

The Red Strings Club comes full circle. It ends almost exactly where it begins. Brandeis is still falling. He’s still going to collide with the ground. His fate’s sealed. But that doesn’t really matter. In The Red Strings Club, it’s how you arrive at a moment that stands out.