People often say Zelda never innovates, but I’d argue that they haven’t been paying attention to the many unique games in the series. Titles like Minish Cap feel completely different while maintaining the classic feel of the NES original, and spinoffs such as Four Swords often encapsulate that same spirit. That’s also true of Tri Force Heroes, a new three-player spinoff for the 3DS.

There’s just one major catch — like many other things in life, it’s less enjoyable to play with yourself. 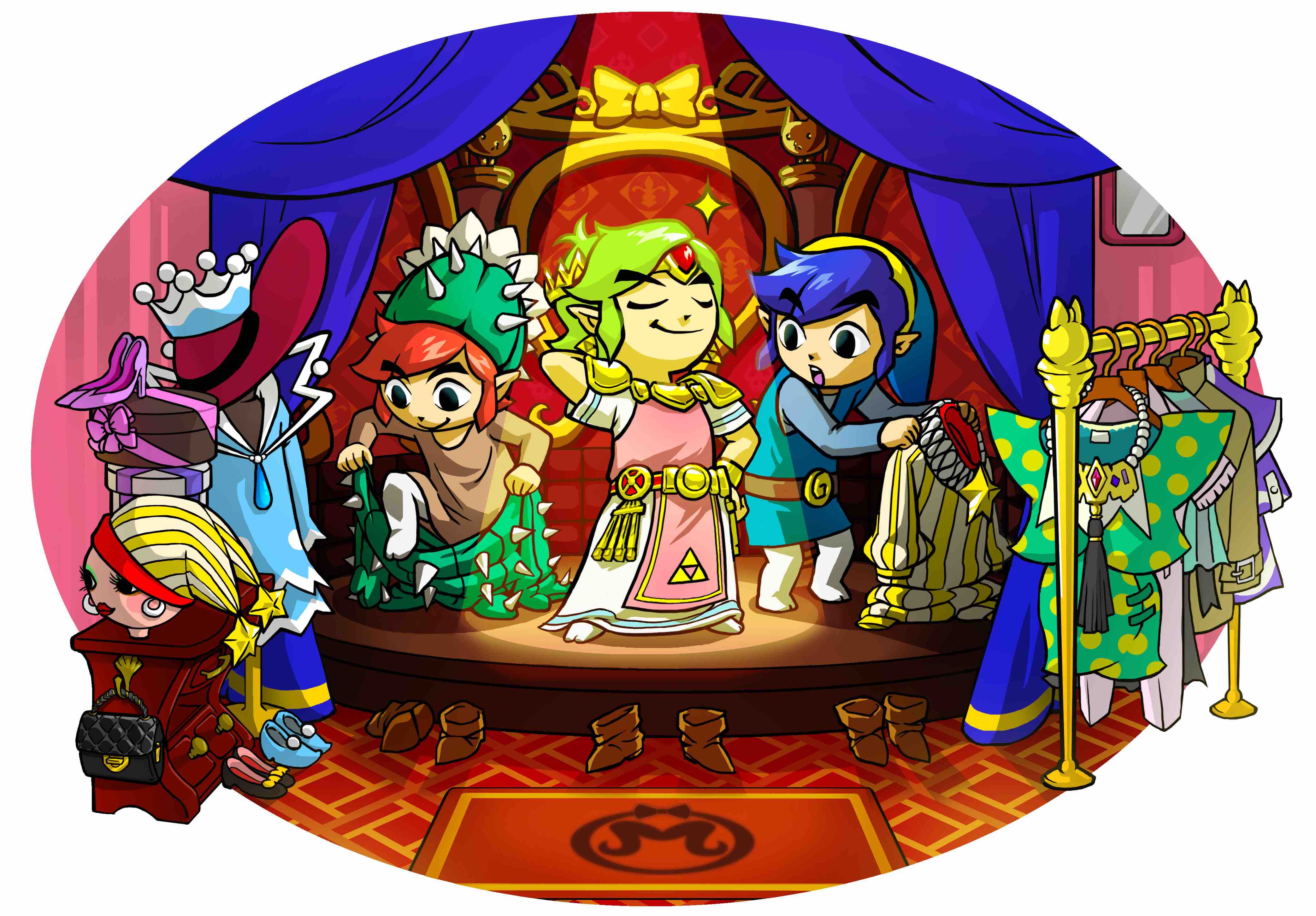 This time around, Tri Force takes place in the kingdom of Hytopia, bordering the desolate Drablands, home of an evil witch. Said witch is jealous of the princess’ beauty, so she casts a spell on her to hide it forever, with a skin-tight suit that won’t come off. Only chosen heroes can enter the Drablands and break the curse, which is obviously where you come in. It’s not the most original setup, but I like it. The new setting and cast of characters (including the depressed king) help make Tri Force more interesting.

Although the general setup of the game involves level-based dungeon crawling for loot, there is a hub world, and bits of story woven in along the way. The town hosts a costume shop (more on that later), a daily chest-picking minigame, a Miiverse gallery, and a few extra NPCs to talk to as well as several secrets. It will only take you a few minutes to trod through, but it has enough character to get by.

Link (or more appropriately, the “hero”) has a few abilities at his disposal right away — dashing, swordplay, and picking up items. The rest will have to be acquired by way of dungeon items (such as traditional arrows and bombs) or costumes. The latter will grant you special abilities, mostly in the form of boosting items or powers, and can be crafted at the aforementioned shop. It’s important to note that this is the basis for the entire game, which is provided in a Skinner box fashion similar to MMOs or other dungeon crawlers.

The multiplayer element adds new mechanics entirely, most notably the “totem” system. Here, you’ll be able to pick up one or two Links (or in turn, get picked up), which will allow players to access greater heights, or slash their sword and use items at the top. Often times you’ll have to create a stack of just two Links while the other player hits a switch, and so on, leading to some interesting puzzles that have the mark of a classic Zelda game, with the obvious Tri Force teamwork twist.

Your loop will consist of entering dungeons, besting them, and then choosing from a selection of chests at the end. You’ll be granted materials, which can be pieced together to create new costumes, and thus, a new strategy with which to approach each level. You can of course “beat the game” straight through and not experiment, but the spirit of Tri Force is decidedly Diablo-like in nature, leading players to return to levels constantly — if you dislike that type of gameplay, I’m warning you now.

Strangely, the online component is very advanced for a Nintendo game. Online play is available with full matchmaking capabilities, as well as friend-specific lobbies, and a robust offline component that allows for download play. Hell, there’s even a blacklist function so you can block people online who ruin games. There’s no voice chat of course, but the emote system and intuitive nature of the dungeons don’t require it in the slightest. In fact I actually prefer some of the cuter emotes, like the cheerleader dance that gets progressively larger on-screen the faster you tap it.

I had the chance to play online numerous times with strangers, and it was a pleasurable experience to say the least. The game often allows players to shine individually, but divvies out unique items to everyone, forcing all members to work in tandem. For instance, one game I was the only person with a bow, so I had to hit far away switches and enemies while my teammates carried me to the appropriate height. Meanwhile, they had to clear blocks with bombs so I could reach those switches and back them up with my sword.

It was a rush, and that feeling didn’t really let up through the entire campaign as I played through it with teammates. Bosses are even more fun, as they provide for an array of different strategies that involve anything from splitting up to working as a totemic unit. Each zone mixes up the theme and new mechanics just enough to keep you interested, especially if you’re learning all of these concepts for the very first time with two other people. Plus, it feels good to save the day with a new costume you just picked up earlier that afternoon. 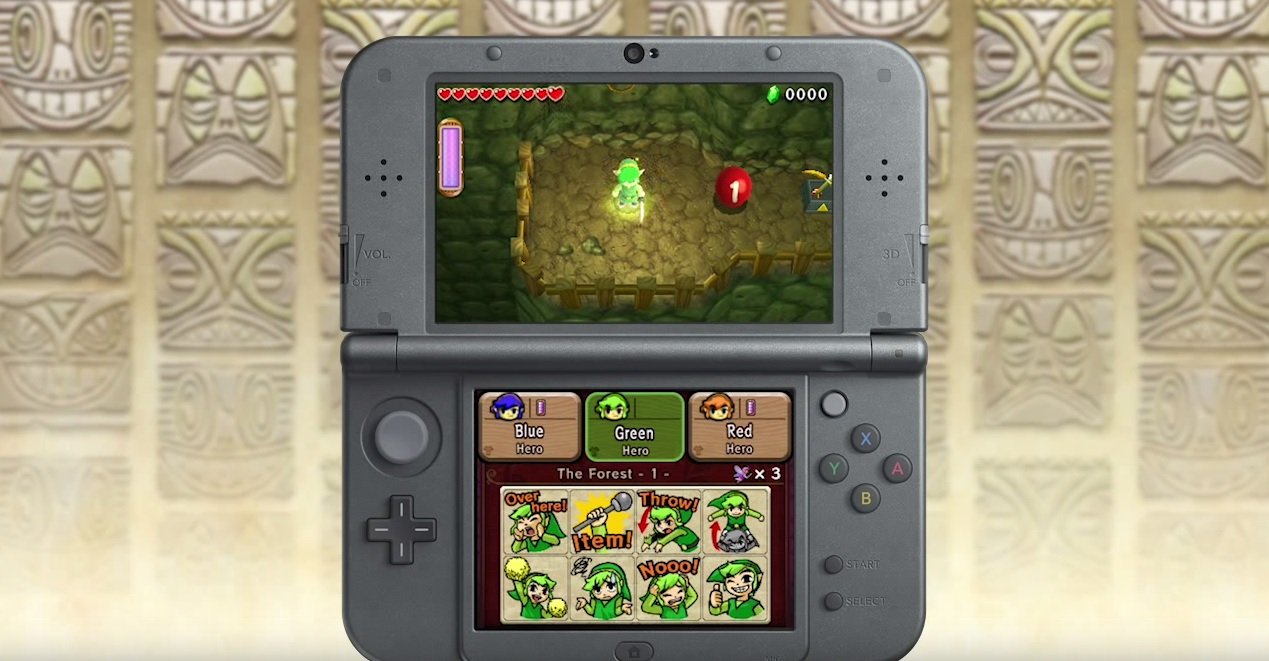 Solo play however isn’t nearly as fun. Whereas Four Swords and Four Swords Adventures had plenty of concessions for those who decided to play by themselves, Tri Force Heroes is the exact opposite. Here, you’ll have to deal with “Doppels,” which are copies of your character — they emulate the other two players. To transfer your essence into another Doppel, you’ll have to tap their portrait on the touch screen. It’s not only a pain to have to do this manually without a button shortcut, but it essentially amounts to doing each level three times over as you’ll have to get to a location, select another Doppel, and repeat.

Very early on you’ll learn that picking up Doppels in a totem formation and moving as a group is a way to go, but puzzles are often so complex that you need to break up frequently, and thus, control the Doppels individually again. It’s puzzling why Nintendo didn’t create a new campaign just for single-player folk. I mean, to play by yourself you have to enter a completely different room in the castle, so it already had the groundwork to be its own game type.

I would outright suggest that you avoid Tri Force Heroes if you plan on going at it alone. The good news is that the online portion works wonderfully, and with download play, you can get a local three-person game running up in no time. If you don’t fit that criteria though, you can probably pass on Link’s newest adventure.