Two of the finest PlayStation 2 titles I know of were created by the same team. Both Shadow of the Colossus and Ico were crafted by the creative minds at Team Ico, a group that is slow to release games, but makes masterpieces each time. I hold both in such high regard that I’ve been known to force people to play them. One friend of mine in particular came to my city for a short visit not too long ago. I insisted that he play Shadow of the Colossus, and I monitored his progress throughout, clearly stating that he was forbidden from doing anything else until he completed what I consider to be one of my favorite games of all time. If he didn’t love it, at least he knew better than to tell me otherwise.

Obviously I was excited to hear that both games would appear on one compilation, remastered in high definition on the PlayStation 3. My heart wants to say that the original PS2 titles were perfect, but the game critic in me knows better. While both games are still among the most expressive, artful and influential titles ever created, they had their issues. Even this die-hard fan will admit that there were hardware limitations, graphical glitches, low frame rates and some control issues. So again, news of a HD remaster for PS3 was a dream come true for me.

Yes, a dream has come true. I said that. I think you know where this is going.

Here’s the CliffsNotes version of Ico‘s story for those who have somehow missed this game: Ico‘s opening shows a young boy with horns being dragged off to a massive stone temple. He is placed inside a large stone container and put on an even larger stone shelf containing many more of these containers. The boy was to be the next sacrifice. Some kind of natural tremor happens just after his imprisonment and this allows him to escape. While working to make his way out of the temple, he encounters a mysterious girl held captive in some kind of bird cage, held up and away from scary shadow people who seem to want to drag her underground.  After freeing her, the boy finds out that they will have to work together to make it out of the temple. 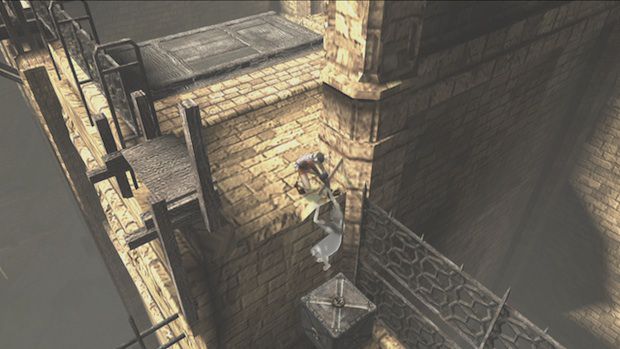 Ico’s gameplay is platforming, but the twist is that this boy has to drag along his companion, Yorda. Literally. You’ll hold down the L1 button to hold her hand and guide her away from danger, onto platforms, over ledges and more. She really sucks at all of that, but at least she holds some mysterious power that lets her open temple doors for Ico. Together their powers make for excellent puzzle platforming. There’s also a bit of scaredy-cat combat, with Ico swinging a little stick at Yorda’s creepy pursuers. Your stick doesn’t do much, so the swinging is frantic and sad. Still, you’ll find yourself doing what you can so that she isn’t dragged under.

Puzzle-platforming, dragging a girl around and wimpy stick combat together sounds tedious, but it works really well, and we have Team Ico’s beautifully paced and designed levels to thank for that. Fantastic artwork, eerie audio and innovative storytelling all add to this combination to make this an unforgettable experience. It’s a game that you’ll be happy to get lost in. It’s one of those rare games that takes you away to another place, one that’s hard to forget after completion. Sure, you could nitpick on edge/ledge detection or the syrupy-slow camera movement, but I promise you that once you complete this hauntingly beautiful title, you won’t be hung up on minor details like that. 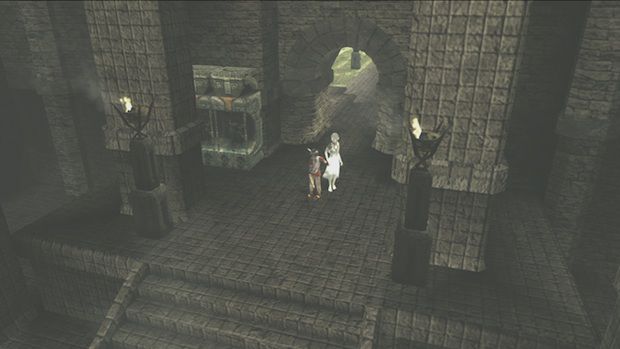 Everything I’ve said so far applies to both the original and the PS3 remake, so if you’ve somehow missed this game, I’m hoping my high praise will get you to pick it up. Well, either that or its technical upgrades. Ico is even better now with its graphical overhaul. It won’t blow your eyes out with color and shininess, though. Ico was always a visually muted game, and the remake does not change that. The lighting seems to have been tweaked; it’s so pretty now, though not always perfect. The higher-resolution textures make the game’s design and architecture even easier to appreciate. It’s so true to the original that those who have played Ico won’t think much about it after it gets going. They did just enough with this overhaul to make sure that anyone who wouldn’t be able to get over early PS2-era graphics would have nothing to complain about here. Seriously, there’s nothing to complain about.

Shadow of the Colossus

If you thought the opening to Ico was depressing and heavy, get a load of this: A desperate guy travels to a strange land on the back of his trusty horse. His only other companion is his dead girlfriend. Their journey ends at a sort of temple (Team Ico loves temples), and there he places this girl on an altar, begging for her life to be restored. A huge voice from the sky actually responds, telling him that he has to visit every corner of this realm to slay 16 colossi in order for his wish to be granted. Sure, no prob.

Shadow’s gameplay is a mix of open-world exploration/platforming and massive, drawn-out, insanely-scaled boss battles. Our hero has to travel rugged, varied land by horse, guided only by a legendary sword that focuses sunlight as a sort of compass. About 25 percent of the fun is looking for the big bastards, and the other 75 is taking them down. Beasts of every type await you, and all of them are so huge that you’ll have to scale them, working up them like you would a tower in a 3D platformer. You’ll ride on the backs of massive flying creatures, hang from the fur of stories-tall upright bipedal walkers, and roll and duck from mountain-sized rammers. Each one is an absolute wonder, so much so that if you’re anything like me you’ll die many times just marveling at them. 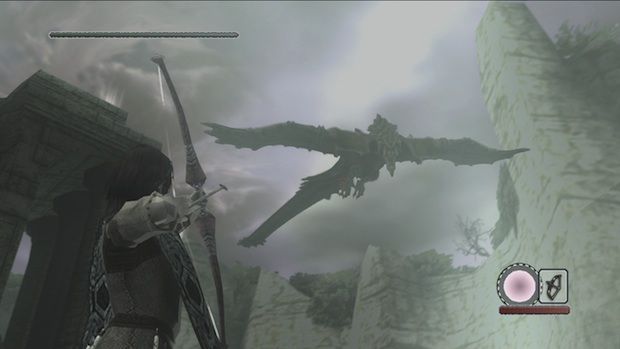 The magic in Shadow is the scale, and how it shows just how weak you are in comparison. Scaling these beasts takes so long that you could look at each of the colossi as a game level. After scaling them, if you manage to survive and hang on, all sense of accomplishment fades as you peck away at the colossus’s life bar with your little weapons. Each beast has a weak spot, and you’ll have to use every trick in the book to find them and attack them with your comparatively small and weak sword or arrows. Only after successfully scaling a beast, managing your limited grip strength, and getting in enough hits to take its life will it fall. Trip up and you’ll start all over. Trust me on this: you’ll start over many, many times. Some of those times you may curse the game’s wonky camera or Agro’s (the horse) reluctance to let you mount, but most of the time it will be your fault. You won’t care about any of this when you see just how beautifully this game’s story unfolds.

The original game had a few issues in the graphics department. Maybe Team Ico dreamed too big for the PS2, as I remember the game’s frame rate coming down to a stutter in some really intense sections. Pop-in and other graphical glitches were blemishes on this otherwise beautiful game. I’m glad to say that all of these issues disappear in the PS3 version. And unlike Ico’s upgrade, which was more subtle, Shadow’s really shows off all the fine art and detail we missed in the original. This looks pretty close to a modern-day PS3 release. Everything from wall textures to backdrops looks so much better that I found myself a bit distracted during the heat of battle. I really shouldn’t be dying this much, considering how many times I’ve played this game!

Everyone wins with this collection. I don’t know of a fan of Team Ico’s games who wouldn’t kill to play them again in high definition at 1080p, not to mention with added Trophy support and a 3D option. If you’re like me, and have played each of these games a few times, you’ll probably forget that you’re playing a PS2 game most of the time. Both games really look so good that they feel new. I’m sure that current fans of these games needed no convincing, so I’ll stop here. Oh, but you’ve got to see the colossi in 3D! Borrow a 3D television if you must. 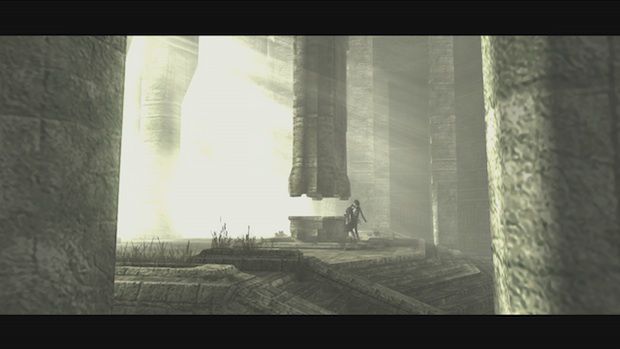 Those who have somehow missed either or both of these titles have the perfect excuse to jump in now. The price is right at $40 for the two. You can see what all the buzz is about without having to deal with those blurry old PS2 textures and frame rates, or hiked collector’s asking prices for the originals. You shouldn’t notice that these are old games aside from a few small glitches. My guess is that new players will be sucked in, joining current fans in adding both of these titles to their all-time favorites list.

To the new player: I’ve slapped a lot of scores on a lot of games in my games-writing career, but I’m asking you to forget about scores for now. Both of these games remain at the top of my list of games to recommend, even today. I really can’t think of any other games that I’d recommend more. The originals are both so lovingly crafted and inspiring that I think gamers 50 years from now will still be talking about them. No, they’re not perfect, but they’re both fine examples of brilliant game design, and they both put forth an experience you won’t soon forget. Please, play these games.