Those eyes have seen some shit

The Haunted Island, a Frog Detective Game is wholesome in a way that you don’t often see in this industry anymore. The entire presentation has an uncanny children’s book vibe to it, and everything feels slightly “off” in all the right ways. It made me laugh like a dork, and I adore it for that.

The story revolves around a detective, who is also a frog, being given a spooky new case involving a haunted island. The king of the island has been hearing strange noises lately, and a ghost is said to have taken up residency. Lobster Cop was their first choice for the job, but he wasn’t available, so they went for the next best thing. As the titular Frog Detective, it’s up to you to solve the mystery with the help of your trusty magnifying glass. 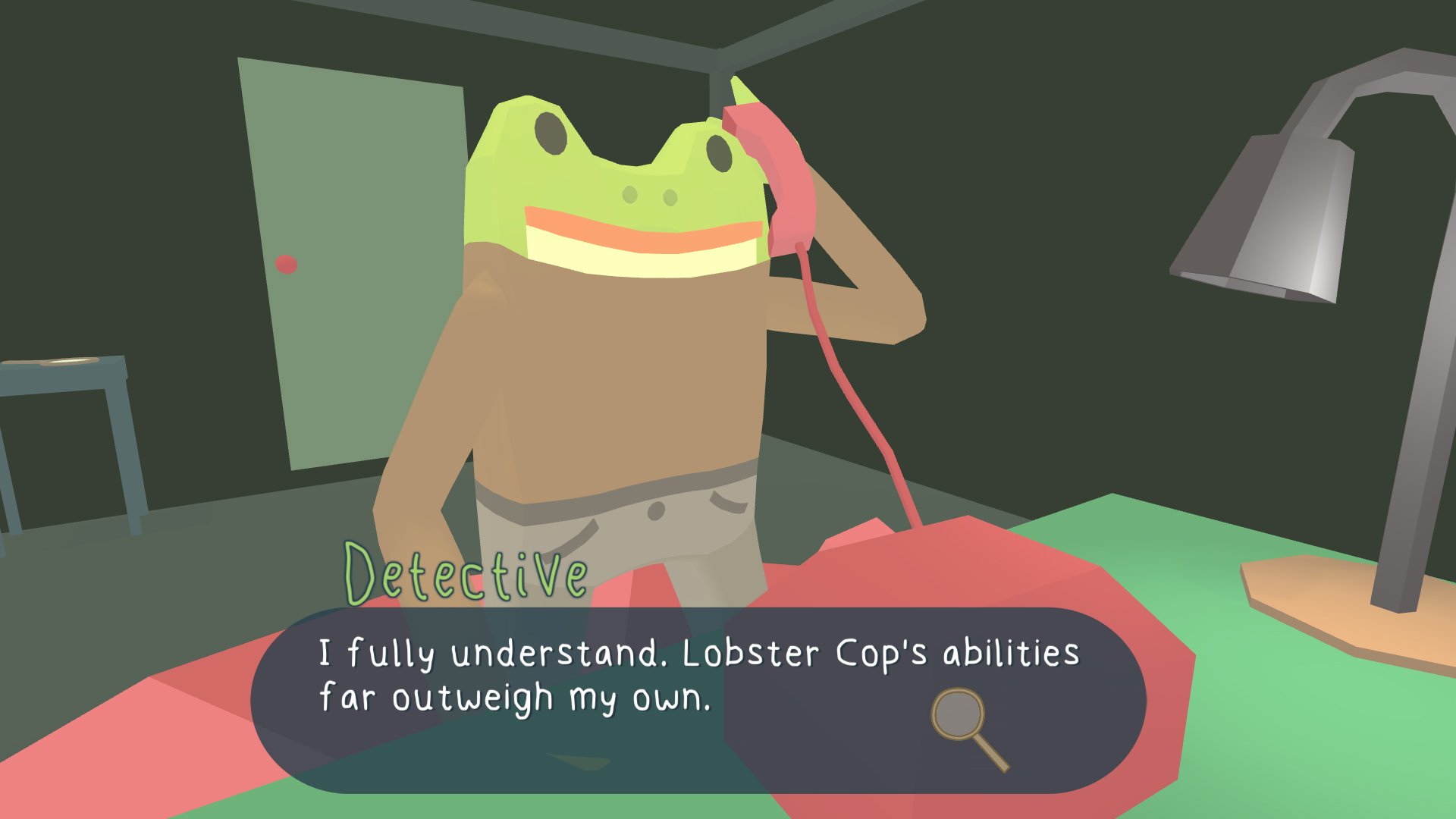 It’s worth noting that this magnifying glass is completely superficial and actually makes it more difficult to see things clearly, but it never got old raising it to my eye while getting into character. All it takes is a simple press and hold of the right mouse button, and you’re a regular Sherlock Holmes. It’s such a small touch, but it’s fun and fits the atmosphere.

Your more conventional controls consist of moving with the WASD keys, adjusting the camera with the mouse, and left-clicking to select dialogue options or items. This is an extremely straightforward game that borrows a bit from classic point-and-click adventures. However, unlike many of those, you won’t ever find yourself lost or wracking your brain for puzzle solutions. It’s a low key, linear, relaxing story that’ll likely make you smile a whole lot across its roughly one hour playtime.

Most of your adventure will be spent chatting it up with the locals and soaking in the scenery. The dialogue is clumsy and awkward in a way that’s endearing and relatable. This isn’t accidental either, as it plays a key part in the charm of it all. Everyone sports these cold, dead eyes that never blink, and the animations are exaggerated and dopey. It has a character who signed up to be a ghost scientist who thought they’d applied to be a toast scientist. Hilarity ensues, I assure you.

The humor is incredibly dry, but there’s an innocence in its delivery that keeps it feeling somehow sincere. It’s a far cry from the crass slapstick routines that I’m used to seeing in the medium. Unfortunately, you won’t get to spend too much time with the lovable cast of characters on an individual basis, but there was just enough here to give everyone a touch of personality.

All of the artwork is suitably goofy, and gels wonderfully with the whole aesthetic. Before anyone was even talking, I’d already let out an audible chuckle. The way lightning cracks across the sky in choppy intervals and the bright pastels that make up the world around you are crude but serve their purposes well. The soundtrack consists of some lighthearted jazz that got me in the zone and ready to go hunting for clues too. 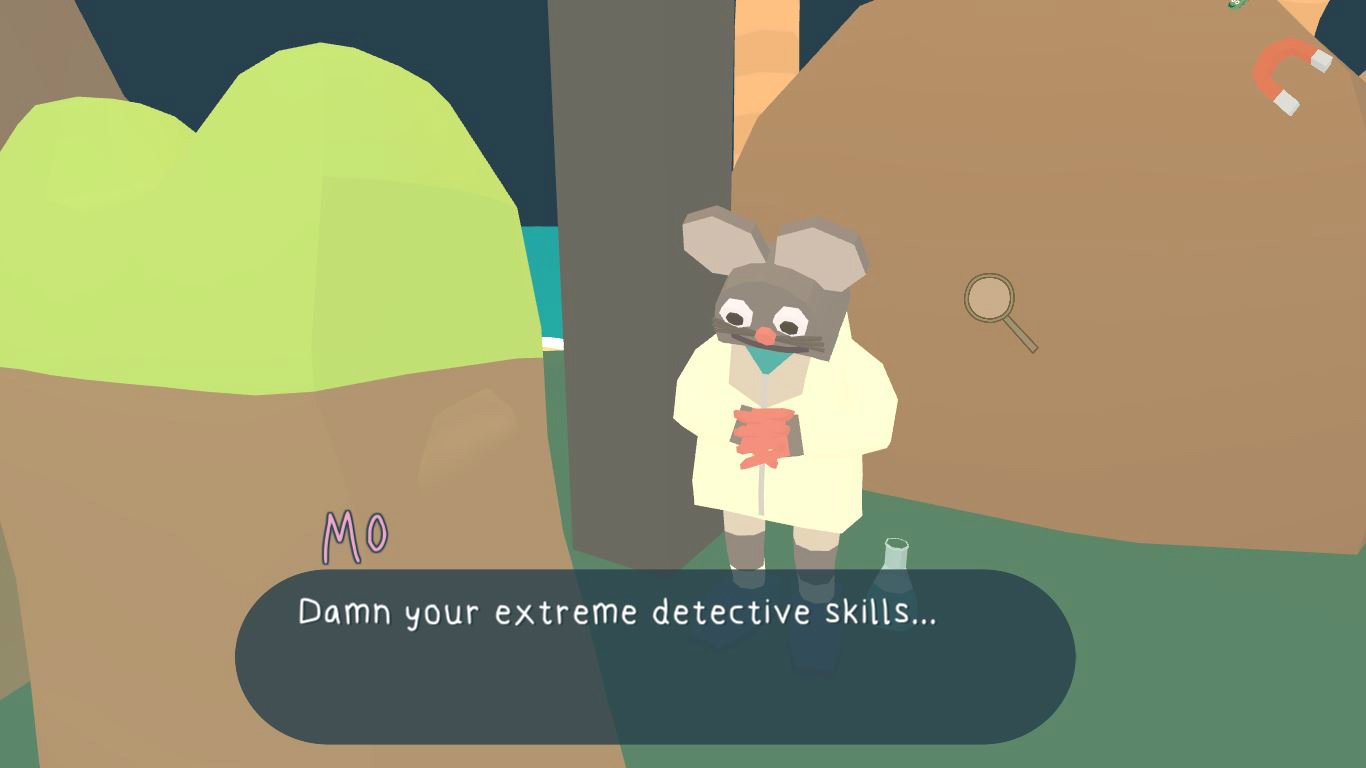 The Haunted Island serves as a fantastic introduction to a world and characters that are just too cute not to fall for. It may not look like much at first glance, but there’s something pretty special here. If the playtime had been stretched out a bit longer, some fatigue might have started to set in, but the pacing is so brisk that I was immediately itching for more.

Luckily, a sequel is already in the works and I will absolutely be there day one to play it. This has some great potential as a bite-sized series to spend an evening with. If I had kids, this is exactly the sort of experience I’d want to share with them. As a thirty-one-year-old bachelor, I still think it’s pretty gosh darn rad.