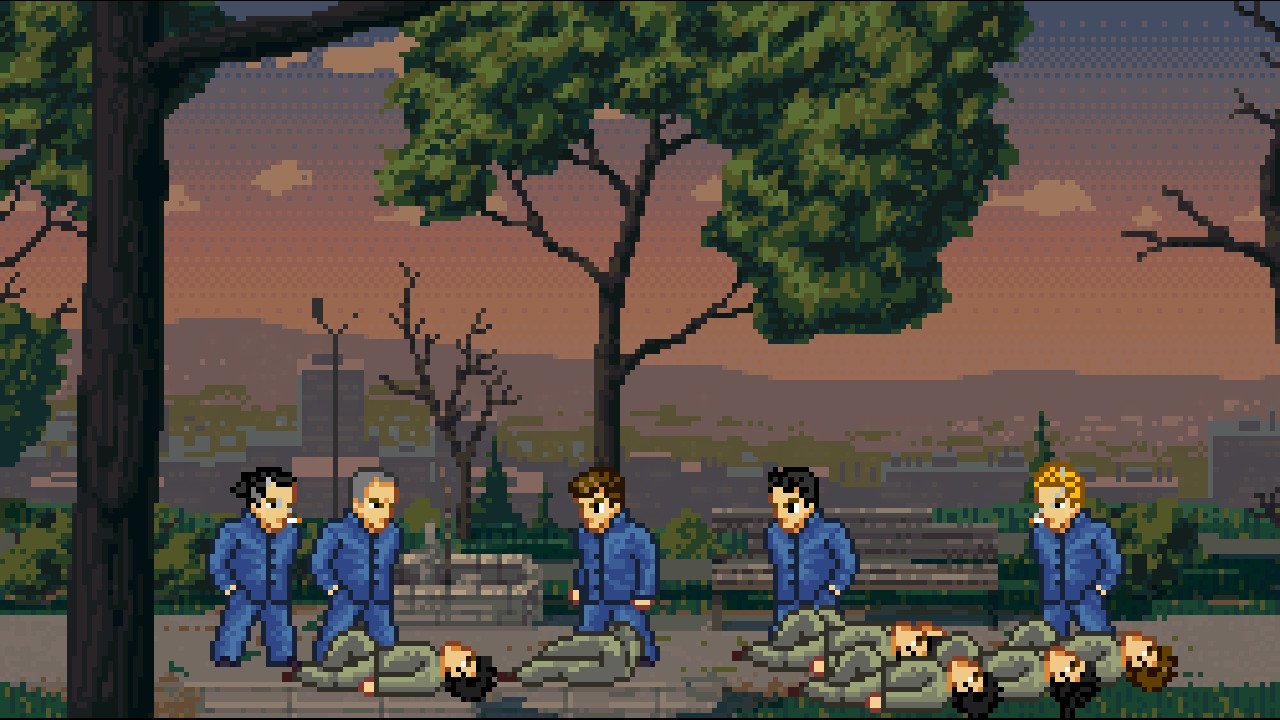 Me and my friends

High school is typically one of the most confusing times in a person’s life. Unsure of what your future will be and how you fit into the world, teens deal with existentialism in various ways. Some stick to studying and become straight-A students, others stray from the path and wind up delinquents. For everyone, though, they’re just trying to discover who they are and how they’ll contribute to this shared experience we call life.

The Friends of Ringo Ishikawa, a genre mash-up indie title from developer Yeo, is an exploration of what I said above. Taking place in a quaint Japanese town, the game casts players in the role of a high school student that seems hell-bent on being the biggest badass he can be. While it contains some excellent dialogue and powerful moments, a rotten bug in the Switch version can end up souring your experience.

The main plot in The Friends of Ringo Ishikawa follows title character Ringo as he and his friends live out their senior year in high school. A motley crew of delinquents, Ringo and his gang skulk around their fictional Japanese town and cause all kinds of trouble to distract themselves from their worries. While none of their problems are truly that big, the finality that senior year holds makes mundane issues seem like the most important thing in the world to these kids.

Apart from that setup, there isn’t much plot to really speak of. Certain events happen, but Ringo Ishikawa is more about creating an atmosphere and setting than it is about telling you a specific tale. The real meat of this game comes from the interactions that Ringo can have with the people in his class. You’ll go to school, study for exams, read books to up your learning skill, get a part-time job to earn some money, and even go on a date if you’re lucky enough. This is more a coming-of-age story as told through the means of video games than any specific genre of gaming.

In fact, the gameplay feels like a mashup of Persona, Yakuza, and River City Ransom, which sort of adds to the confusion that Ringo feels about his life. You can build relationships with your friends or totally ignore them. You’ll go around battling random thugs and even get attacked by them, at times. You can visit shops to buy food, grab some movies, or get a bite to eat. Despite having all of these influences, Ringo Ishikawa feels like a wholly unique take on what a sandbox game can be.

But that lack of direction is where my biggest issue comes from. I understand that developer Yeo was going for an existential beat-’em-up vibe, but the game provides you with absolutely no direction. Harkening back to the old-school days of the NES, Ringo Ishikawa begins with a pseudo-tutorial and then gives you completely free reign to explore its town. It took me a good four in-game days to even realize I could visit the school and participate in classes. I suppose that’s in staying true to its central theme, but I can’t help but feel the aimlessness of the whole affair does a disservice to the well-written interactions that are here.

If you do continuously go to school, you can have Ringo speak with his classmates and you’ll begin to learn about their lives. Everything is written with a flair that exhibits the inexperienced manner that high school students speak with, lending an air of believability to the proceedings. Sentences are often short and very blunt, with lots of cursing to emphasize how mature these kids think they are. I can’t help but see some of myself in here since I was often acting just like this.

If you choose to completely ignore the school aspect, though, you can turn Ringo Ishikawa into a pure beat-’em-up. There’s a rudimentary XP system that sees you level up and get stronger, but there are also certain locations and events that will help you learn new moves and skills. Visit a gym long enough and the owner will grant you access to his facility for free. You can do pull-ups at the local playground to build up your health. You’re able to speak with a mechanic at a junkyard who will then teach you hidden techniques.

Hell, even random things like watching Kung Fu films will grant you new abilities. There are systems in place to let you assign yourself goals (not dissimilar to how Animal Crossing is all about self-management), but there really isn‘t a whole lot of reason to engage with them. I know that statement is coming from me looking at this like a game, to which Ringo Ishikawa really can’t be classified. This is more a recreation of real-life with gamified elements than a curated experience meant to provide you with a concrete story.

I can sort of dig that, too, but what really killed the whole thing for me was a pretty big bug in the Switch version. If you’re one to utilize the full functionality of Nintendo’s device, you probably end up putting your system to sleep mid-game. Since most every application works perfectly fine when doing so, I didn’t think anything of resting my Switch right after starting to grab a drink. Unbeknownst to me at that moment, I had triggered a glitch that stopped everything from properly progressing.

All of the music stopped, Ringo’s friends were nowhere to be found, and no “story” events were happening. I figured this was normal and kept plugging along for roughly seven or so hours. I discovered little things like reading at the library, buying novels, and even the part-time job, but I felt like my character was in limbo. He was going about his life and maxing out all of his stats, but there was seemingly nothing happening. Without his titular friends, I was also wondering why they were even mentioned in the game’s title.

After growing frustrated, I wondered if a reboot of the console would somehow fix this perceived issue. Turns out it did, because as soon as I restarted Ringo Ishikawa, I was greeted with actual music, more sound effects, and a cutscene detailing some of Ringo’s life. For whatever reason, this Switch version cannot be put into sleep mode or else it halts the game from continuing.

Sadly, I realized this too late, because it ended up robbing me of a proper experience. What you’re supposed to have is a game where Ringo needs to prioritize whether he wants to study or practice his Kung Fu. You’re supposed to have friends coming to you with their troubles and you weighing the odds if taking on a gang is feasible at that moment. You’re supposed to juggle going to work to earn some quick cash or studying your ass off to ace your tests. When you remove the story progression, you end up basically cheating yourself out of these moments.

It also presented the story in an incredibly fragmented manner. Normally, events would occur once or twice a week in-game, but for me, I had progressed nearly two months before anything happened. I failed to grow attached to Ringo’s friends and as such, the ending revelation sort of felt like it came out of left-field. There’s an excellent story to be told here, but this Switch version can potentially ruin its impact because of an odd bug.

That isn’t to say without this glitch happening that I’d be in love with Ringo Ishikawa. There are certainly some design issues with specific aspects of the game. While going to school raises your knowledge percentage for each subject, it’s actually more efficient to read everything in the library and then study at home. School is kind of an afterthought, though I suppose it lets you interact with your friends.

The combat, too, can get a little confusing when a bunch of characters are on-screen. You’ll end up hitting the wrong foe, which then allows your intended target to get some free hits on you. The abundance of techniques doesn’t add much, either, as the basic punch and kick combos do fine against everyone. I know this isn’t meant to be specifically a beat-’em-up, but the gameplay feels a little basic.

Still, I can’t say I didn’t find some enjoyment during my time with Ringo Ishikawa. I may have liked it more were it not for that bug, but I also can’t get it out of my head. Depending on how you play, certain events can change and discovering all of the hidden aspects of Ringo’s hometown is a joy. The visual design is also excellent, looking surprisingly sharp and clean when played in the Switch’s Docked mode. I’m a huge fan of the soundtrack, as well, which mixes some downbeat guitar work with jazz-infused battle scores that can really ratchet up the tension in given scenarios.

Ultimately, though, the game ended up not being for me. I do believe it’s worth a look to the right person, but you should know what you’re getting into before taking the plunge. I’d also recommend you check this out on PC because that random bug in the Switch version could wind up causing you to waste a ton of time without you even knowing it.