Here today, down a pit of spikes tomorrow

Contrary to what the title implies, The End is Nigh does in fact begin at the end. The world is over, nearly everyone is dead, and the only thing for the last person left on the planet to do is play video games and stream to a silent, empty world. This is where we find Ash, sole survivor and platforming enthusiast. He’s surprisingly chipper considering the circumstances, finding his joy where he can.

And then his game breaks.

It’s like that episode of the Twilight Zone with the nerd and his glasses, only with more tumors, spikes, and swearing. 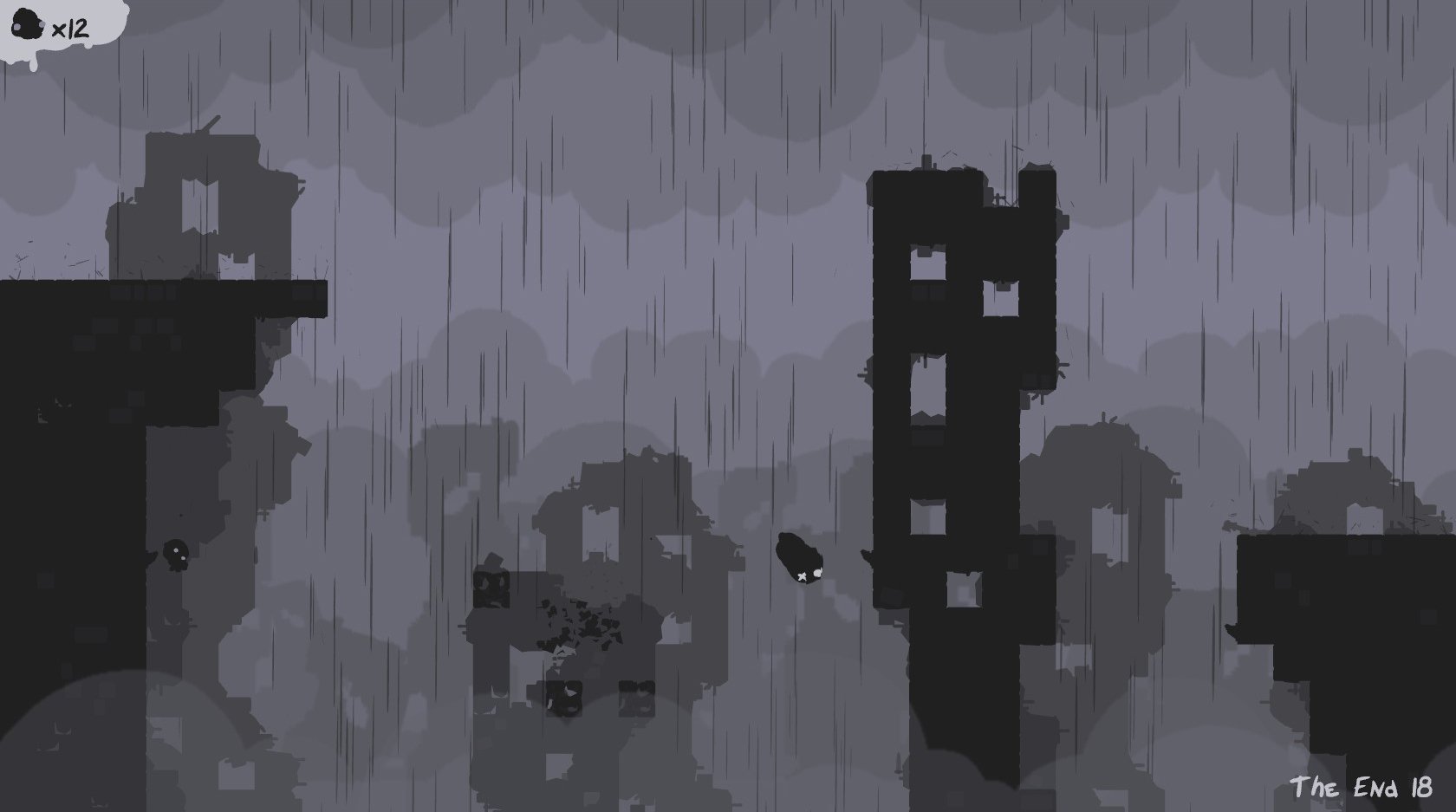 The End is Nigh isn’t a sequel to Super Meat Boy, but calling it a spiritual successor seems a little distant. There is a lot of Meat Boy’s masochistic DNA swirling around in The End is Nigh’s mutant blood, and it’s hard to talk about the latter without addressing the former. They are both super-challenging platformers featuring a teeny-tiny character navigating large stages filled with obstacles and hazards that seem impossible to survive at first glance. The gross out humor is the same, the enemy design is familiar, and you can expect to die just as many times (if not more). It might be the end of the world, but you’ve been here before.

While the overall goals and aesthetic of the two games are similar, The End is Nigh separates itself from Super Meat Boy with a higher emphasis on precision. Meat Boy was a slippery little devil, skidding across stages and sliding up and down walls with a kind of wild momentum. Ash is a little more predictable. There is no run button in The End is Nigh, you run at a consistent and sure speed. Also gone is the ability to slide and bounce off any wall, instead, Ash can cling to clearly marked hooks and ledges.

Jumping off to the side while clinging to a ledge results in a dependable arcing leap (Ash even telegraphs the jump with a ready-animation when you pull away from a wall). You can crouch, but it barely reduces your profile at all, which makes sense because it isn’t for dodging things. In fact, crouching while running doesn’t even slow down your speed. What it does do is ensure that Ash will always drop straight off whatever edge he comes across. This is a godsend. There is nothing more frustrating than trying to finagle or wiggle your way off a tricky drop to grab another ledge below, and The End is Nigh solves that problem in an elegant way.

Every level is built around these mechanics, giving the game an almost puzzle-platformer feel. Navigating the levels with your limited tools is a big part of the challenge and I found myself looking twice at a lot of screens trying to figure out how I was supposed to get across a gap or between a pair of crushing spike walls before even attempting a run. Many stages require the player to activate a trap or trigger a collapsing wall and use the shifting scenery as a boost or platform. You’re solving these stages as much as you are completing them.

Adding to the puzzle game vibe is the way the world is structured. Rather than having levels broken into discrete selectable experiences like Meat Boy, each single screen stage in The End is Nigh is connected to the next, and you don’t always travel from left to right. Think of it like a bizarre, side-scrolling Zelda where you’re exploring a large map broken into different chunks. What’s more, you can double back from a different screen should you want to explore the stage or collect a secret from a different vantage point (as is often necessary).

And there are plenty of secrets to collect. The End of Nigh incorporates my favorite kind of design when it comes to difficulty. You never choose easy, medium, or hard in any menu – you choose it for yourself in each and every level.

Make no mistake, this is a brutal game. Just getting from one end of a screen to the other in one piece is an accomplishment all by itself. However, each level also includes a collectable tumor you can grab, should you want to make things even harder on yourself. Grabbing a tumor always means taking an extra risk, going an extra mile, and (inevitably) tripping and dying on the same fucking spike a dozen times. Some of them can be a real pain, but tracking the little bastards down becomes fiendishly addictive once you get on a roll.

Also satisfying is finding as many secret paths and hidden levels as you can. While most levels have a clear start point and goal, many of them also hide sneaky alternate routes and paths leading to more challenging stages or secret gubbins. Collectible game cartridges can be found in the most tucked away places, which in turn unlock bonus extra-difficult retro-stages which serve as both an homage to different classic games, and as the height of The End is Nigh’s challenge (seriously, some of those mini-games seem impossible).

It’s a fantastic design that doesn’t just reward exploration and experimentation, but having dumb, simple fun as well. I found a good number of secret rooms just by going “hey, I wonder if I can make this jump,” or chasing some enemy down a pit, and generally assing around. Uber-challenging platformers are often used as bragging rights titles, or as badges of honor proving just how hardcore a particular player is, but game designer Edmund McMillen has never lost sight of the fact that they need to be fun first and foremost.

The End is Nigh is incredible. It has the phenomenal design, flawless controls, and kickass soundtrack you have come to expect from a McMillen game. At the same time though, I also found myself growing fatigued by the end of it. While The End is Nigh is by no means a long game if you just want to work the critical path, it cleaves so close to what Meat Boy did that it can almost feel repetitive. Especially when you consider how many Meat Boy inspired platformers have come out since its release.

At the end of the day, you probably already know if this game is right for you. If you couldn’t get enough of Super Meat Boy and have spent the past seven years fiending for more punishing platformers, than The End of Nigh is something you should immediately inject into your veins. If you are usually iffy on super-challenging platformers, but curious if this is the one that will turn you around, keep on walking.

Filed under... #The End is Nigh#Top Stories