Daedalic Entertainment, prolific crafter of many a point-and-click adventure, has returned to the world of Aventuria, continuing the yarn spun in last year’s Chains of Satinav, a gorgeous, but slightly uneven game with that didn’t quite live up to its potential.

So we’re in sequel territory, but don’t fret if you’ve not played Chains of Satinav as this second outing, Memoria, can stand on its own, and when it references its predecessor it does so without demanding much prior knowledge. Frankly, this is the best place to jump in, because it’s bloody magical.

Not just a superior sequel, Memoria is the best adventure that Daedalic has ever crafted. It’s a shame, then, that some spotty voice acting and moments where the translation from German to English leaves a lot to be desired crop up, as they mar what is an otherwise excellent fantasy romp. 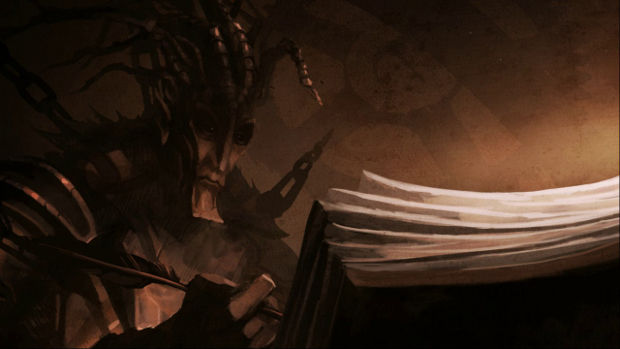 Memoria tells two tales, inextricably linked, but separated by almost 500 years. There’s the continuation of Geron’s story, the unknown and sardonic hero of Andergast, as he attempts to find a way to turn his fairy chum back into her original form after being transformed into a raven. His quest for a cure leads him to a traveling merchant who claims to know a spell that will make Nuri herself again, but there’s a price: Geron must answer a riddle.

While riddles and adventure games make excellent bed fellows, this is not one that can be solved quickly. Discovering both its meaning and the answer leads Geron to explore the ancient history of his world through dreams, journals and stories. You see, the solution to the riddle is found in the journey of Memoria‘s second protagonist: the deposed Princess Sadja. 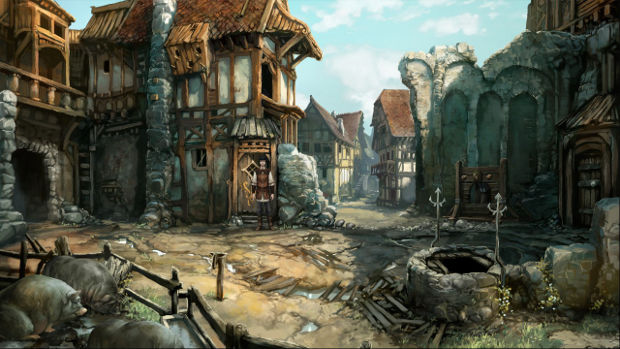 Centuries before Geron was even born, Sadja travelled from her land, across swamps, forests and mountains to reach the site of an upcoming battle between holy orders and a demonic horde. Her goal? To become a legend. Unfortunately, she failed to be remembered by but a few individuals and her story was unfinished, waiting to be completed by a simple bird-catcher turned unwitting hero hundreds of years later.

Splitting the game between Geron and Sadja allows Memoria to spin multiple, equally interesting but extremely different yarns. Geron’s plight is more immediate and smaller in scale, while Sadja’s adventure is a world-spanning epic, a tale of gods, elemental forces, and the potential end of the world. Memoria jumps between them, and they transition seamlessly as Geron discovers more about Sadja’s life.

Though Sadja is under player control for her portions of the game, Memoria manages to retain the feeling that we are learning about her second-hand. It is in one of the later acts where this used to the greatest effect. Geron is reading a diary written by an elemental mage who met Sadja, and because of this, the player is unable to hear certain conversations or witness everything that she does, because the author was similarly limited. 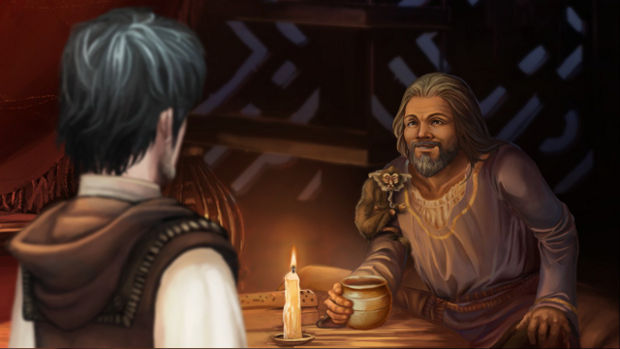 While both protagonists are well written, it is Sadja who steals the show. Where Geron is slightly bumbling and mopey, Sadja is strong-willed, competent, and adventurous. Both characters, like everyone in Memoria, are flawed, but if you needed to choose a companion to join you on a dangerous adventure, you’d be hard-pressed to find a better ally than the Princess. Geron also perpetually sounds like he’s waking up from a very deep sleep, which grates on the nerves within five minutes.

The voice acting, in general, is pretty uneven (occasionally not even reflecting the text, or being in German in one instance), though it falls somewhere in the middle when compared to Daedalic’s other adventures. Better than the abysmal A New Beginning, but not nearly as proficient as The Night of the Rabbit. Again, it is Sadja who stands above the rest, as her voice actor puts in the best performance, closely followed by her sarcastic, talking magical staff. Though Bryda, the novice wizard and ally of Geron, is also well-performed and well-written, helping to make her a significantly more interesting character than her bird-catching pal.

Adventure games have a history of creating likable, compelling female characters, and Memoria certainly continues this. Even Nuri, who spends most of the game a victim, is more competently crafted and fleshed out than the lassies found in so many other titles. Not only does she help to make Geron a more sympathetic character, as we look more favorably on him for spending the entire adventure trying to help her, her internal struggle to retain her fairy-self in the face of her new raven identity drives players to root for her. 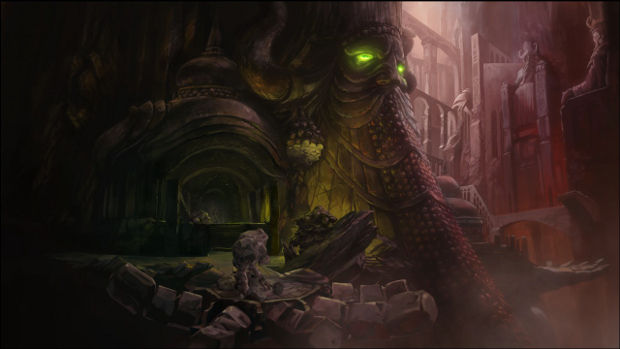 It’s Memoria‘s phenomenal puzzles that really make Daedalic‘s latest title stand out from the crowd, however. I’ll be the first to admit that 20 years of devouring adventure games has made me a bugger to please, setting my expectations high and rarely being satisfied. But barring a couple of obtuse or pointless puzzles, most notably a forest maze that can actually be skipped, Daedalic has struck a balance between taxing even veteran adventure gamers’ brains and keeping solutions logical.

Fiddly inventory management is nowhere to be seen, as only a few items will grace your inventory at any one time, and when they need to be combined, it makes perfect sense and there are usually some sort of dialogue hints, and the focus is, instead, on creativity and experimentation.

Magic plays a large role in solving puzzles, with both Geron and Sadja employing several spells. The most inventive is probably Sadja’s “send vision” ability, where she is able to place images of items in the scene into the mind of another character, subtly bending them to her will. The diversity of their magical repertoire means that no one spell outstays its welcome, and they are often used in unexpected ways. 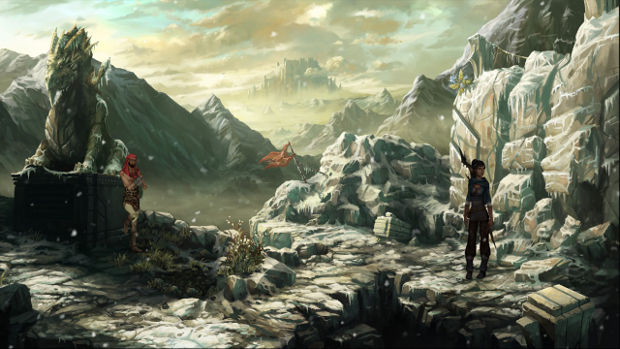 Memoria‘s greatest achievement when it comes to its puzzles is that there’s both a constant sense of progression and a pay-off for almost every interaction. A good puzzle shouldn’t just have players scratching their noggins, it should leave them with a sense of accomplishment.

Using a gargantuan stone statue to rip out a door, allowing Sadja to escape from a stone tomb; reading the thoughts of petrified villagers to create the final part of an arcane ritual; getting revenge on a murderous, cruel one-time-ally with a new spell — these were all tricky puzzles requiring clever use of the game’s tools, and there was a visual and emotional pay-off.

More than just striking a balance between difficulty and rewarding success, Memoria also throws some surprisingly modern, helpful features into the mix that ease some of the frustration inherent in the genre. Pressing the spacebar, for example, reveals every single point of interaction on the screen. Equally convenient is the feature that assists adventurers during the occasional item combination puzzle, making it easier to discern which items can be combined. 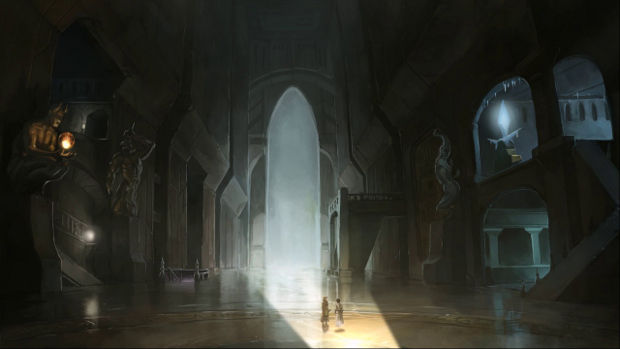 Don’t let all of this trick you into believing that this makes the adventure leisurely, however. I found myself thoroughly stumped on more than one occasion, leaving the game for a while so I could go and clear my thoughts, hoping that putting distance between myself and the game would inspire the solution that eluded me.

And joy of joys, I had to take notes. If you’ve had the misfortune to read many of my other adventure game reviews, you’ll know that I’m a big fan of slumming it with pen and paper. When a game inspires me to doodle arcane symbols in a notepad, I know I’m in heaven.

You’ll undoubtedly be spending quite a bit of time staring at the same screens, so it’s a good thing that Memoria is sumptuous. The exquisitely detailed backgrounds are jaw-droppingly beautiful — genuine works of art, really — and the art style is taken full advantage of with the fantastical locales the game sends its adventurers too. Lush, wild forests, thick with mist; towering arcane cities, floating above vast mountain ranges; dirty, vibrant settlements, full of life — it’s a simply stunning game. 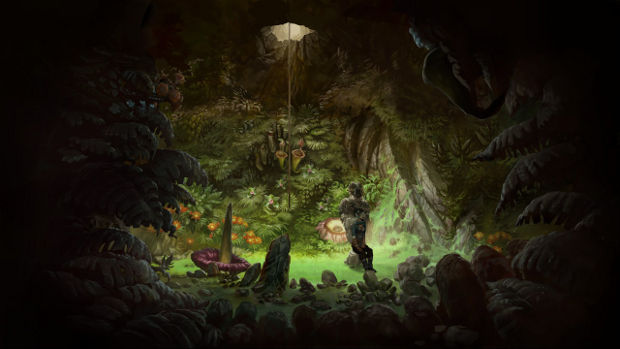 The only point where I found myself less than enamored with the art was in the, admittedly, few instances where scenes would switch to focus on a character’s face. Terrible lip-syncing and the dissonance between how characters appear from a distance compared to how they are painted close up were unwelcome, but these scenes happen so infrequently that it never becomes a serious problem.

The well-realized fantasy world, high-stakes adventure, empathetic characters, and remarkably well designed puzzles combine to make Memoria an extremely memorable game. This is Daedalic finally perfecting its formula, producing a title with imagination and ambition backed up by solid mechanics and a captivating, cohesive story.

Even though Sadja’s tale is wrapped up by the end of the journey, there’s plenty of room left for more adventures in the Dark Eye setting. I can only hope that Daedalic’s next installment continues to build on what they’ve managed to achieve here.