Had more fun in an 8-hour traffic jam

I wasn’t going to mention Ben “Yahtzee” Croshaw, not initially. But between the infamous handle splashed across the title screen and his pre-emptive comments against certain criticisms in the accompanying press release, a thought or two about his perpetually irascible persona seemed inevitable. After all, he’d already plugged the game within his Zero Punctuation videos. The line between developer and character had blurred for this very instance (EDIT: comments suggest I may have confused this with Hatfall, another game he’s promoted in his reviews, so apologies to Mr. Croshaw if that’s the case).

Maybe I was overthinking it, maybe it deserved a mention. Maybe his rants would influence my review, maybe it didn’t matter. Would I get chewed out by his fans for giving it a low score? Would I not “understand it” if I hadn’t played the Chzo Mythos (I have, it’s hit-and-miss)? It was unavoidable that the cult of personality would come up, either from myself, the reader, or on some random forum I’m never going to visit.

Well, after several hours of deliberation and gameplay, I can safely say that The Consuming Shadow is an infuriating game, regardless of Internet fame and reputation. 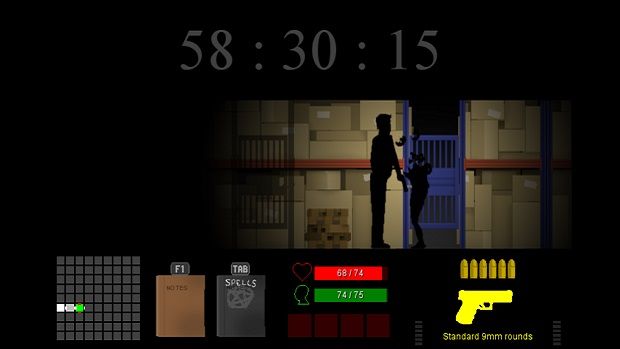 As a lone investigator, you must travel across the UK in a hatchback full of infinite fuel, searching for clues about an invading Elder God and the ritual that will banish them from our world. Starting from the edge of Scotland, you move from town to town (some deadly, some friendly) before arriving in Stonehenge to finish the job. You only have 60 hours before the world ends, so do make those miles count.

The Consuming Shadow can best be described as part dungeon crawler, part roguelike travelogue; FTL by way of Call of Cthulhu. It’s a lazy comparison to make, but one quite deserving of a game so transparently stitched together. If you’re expecting anything more than a reskin and a compartmentalization of cannibalized ideas, then The Consuming Shadow will disappoint.

To quote Croshaw in the press release: “The graphics aren’t the game’s strong point: my goal with the game was to create a kind of horror game more akin to literature.” It’s an honest, if somewhat cowardly cop, considering the lack of sympathy that butters his bread. Graphically, it’s supposed to evoke the Commodore and DOS titles of yore, only it looks like Newgrounds Flash game from 2009.

And with that in mind, The Consuming Shadow has to live and die by its own prose. It actually does an excellent job of selling the severity and doubt of each encounter, but it’s also undermined by a lack of procedurally-generated content. The line-by-line variations of the same paragraph quickly turn stale, despite being a solid read. But then, on the flip-side to that, The Consuming Shadow is a purposefully short game.

It starts out with a first-person view of your car, which is suitably atmospheric; nothing but motorway signs and a passenger seat full of hastily gathered items. Using a GPS, you have to choose a nearby destination, always being wary of time and distance. Random encounters on the road are a case of risk and reward, but if you don’t have the right equipment, they usually end up being detrimental to your cause. Compared to other roguelikes that offer a fair gamble without the specialist items, The Consuming Shadow’s encounters are almost always stacked against you.

Every destination is either a safe haven or a dungeon crawl. The former provides supplies and medical treatment and the latter forms the main crux of the game. Dungeon crawls are where you’ll find clues about each possible invading God and the runic chants needed to banish them; which would be an easy task if not for the scuttling creatures and end-level objectives in your way. Oh, and the fact this where most of The Consuming Shadow’s problems lie. 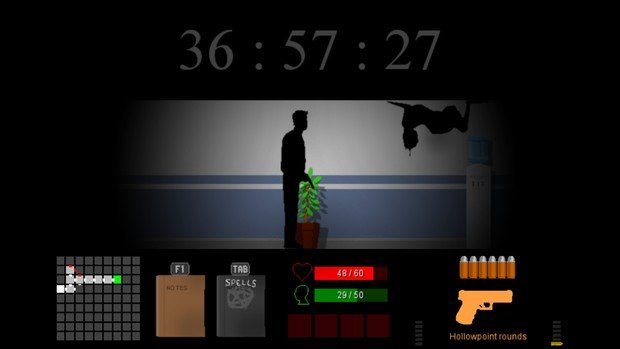 From a third-person landscape perspective, you move through a maze of rooms – be it a house, hospital, warehouse, derelict estate, or park – collecting notes and battling silhouetted enemies. The exploration of an urban environment is a fine horror staple, and it’s a wonderful change from the current crop of first-person jump fests, but all the goodwill is undone by the almost unavoidable attacks and cumbersome controls on a keyboard/mouse setup. Combat is appalling. No witty metaphor or breathless soliloquy, here. It’s appalling.

A handgun is always by your side, with three types of limited ammunition, and randomized spells. But between the flaky auto-aim, the minimal field of view and the enemies’ erratic speeds and ranged attacks, combat is a draining experience. Pistol whipping and an exploitation of blind spots turn out to be the key to success, as spells rarely help the cause. While the monsters are varied and left to the imagination, the tactics against them aren’t. I’m pretty sure you’re not meant to stand side-by-side with a writhing mass, following it around like a conjoined twin, before pimp-slapping it to death.

Since this is a love letter to H.P. Lovecraft, there’s a sanity meter involved. Running away from a problem or encountering a bad decision drains your sanity points, which results in some unnerving hallucinations on the motorway and in the urban mazes. Unfortunately, low sanity also induces an awful QTE event within the decision making. One mistimed click and you’ll blow your head off in a silhouetted suicide. It’s a novelty at first, then a time waster. 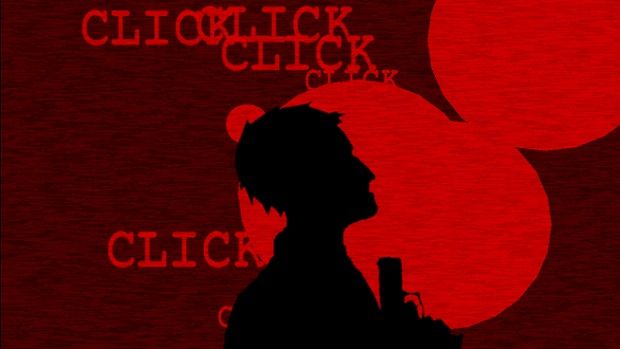 Every session of The Consuming Shadow is clearly designed for repetition and tailored towards streaming (Croshaw is banking on it for exposure’s sake). Failure is never the end – every game over awards EXP for stat boosts and there are unlockable characters, too – though by the time the needed advantages arrive, it’s far too late in terms of interest. The major problem with The Consuming Shadow is that it’s a bubble-gum experience, especially compared to its peers. When it works, it’s only because of a new discovery. There’s something genuinely thrilling about finding a connection and jotting it down in your table of suspects, before setting off to the next hotspot. But when you enter another procedurally-generated dungeon, it’s a wearisome slog again.

The Consuming Shadow is more Frankenstein’s Monster than Eldritch Abomination, shambling along as it does with once fresh parts, dug up from here and there. I can only hope Yahtzee sees the irony the next time he attacks a new game for being old hat or a cut-and-paste job.