A crappy day in Skara Brae

I’m confused as to the actual title of this game. On the Steam store page, it lists “Barrows Deep” at the end. But in my Steam library, it’s just The Bard’s Tale IV. Every time I go to type it out, I inevitably forget about that little subtitle. So let’s just call it The Bard’s Tale IV for now.

I’ve never played the previous Bard’s Tale games, but the bard class has always been my top choice whenever it presents itself. Man, I was really excited when Final Fantasy XIV: A Realm Reborn offered a bard class, even if it was just a singing archer. So naturally, I became interested in this Kickstarted renaissance of a series based on bards and their tales.

Well, I can’t say this is a tale worth hearing right now. 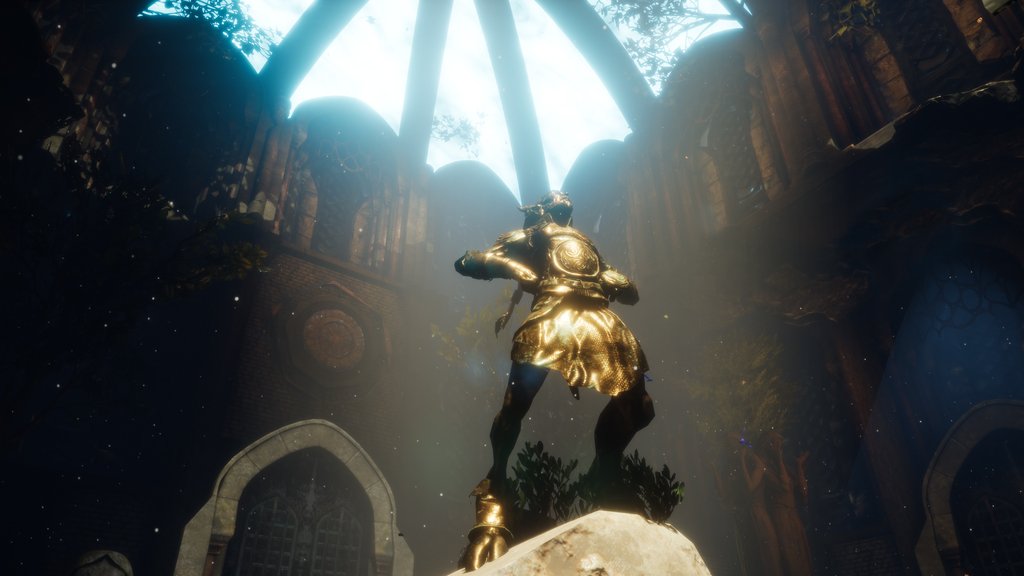 The Bard’s Tale IV is an absolute mess. The framerate is all over the place, and bugs are constantly rearing their ugly head to impede or altogether halt progress. Sure, I’d love to save the world from the biggest baddie who has come from somewhere to ruin everything, but you’re kidding yourself if you think it’s worth slogging through the muck and the mire of The Bard’s Tale IV to do so.

A lot of games will put their best act up front, especially long RPGs. This is absolutely not true with The Bard’s Tale IV. While the combat and puzzles are interesting enough in their own right, starting in the dreary grey and brown town of Skara Brae is so…unimpressive. NPC models look like garbage and no NPC is ever moving around. Everyone just stands still in their NPC pose, waiting for the player to come up and speak with them. Even the idle animations are poorly constructed, with poses not perfectly looping and jumping from one position to the next.

Hell, even conversations feel stilted. For whatever reason, the player must hit “Continue” after everything an NPC says. This isn’t an issue when they are speaking on their own, but it makes the back-and-forth feel so bizarre. Instead of giving the player their choices, they must hit Continue (which stops the NPC’s voice track), and then the choices show up, and then they choose the desired option. It seems small, and it is, but it’s just a constant frustrating oddity.

The writing is witty and often funny, and the lines are delivered well. Though again, many of the character models look ugly and have lifeless animations, creating a juxtaposition between what the player sees and what they hear.

I do want to point out that while Skara Brae and the character models are quite unimpressive, many of the environments are anything but. Maybe the point of Skara Brae is to make the player want to get the hell out as soon as possible, just to see something more beautiful. As a whole, the environments provide a stark contrast to the character models and prove that there are certainly talented artists on the team.

Exploring these worlds can be a blast, thanks to the often inventive and exciting puzzle designs. Sure, moving-block puzzles are nothing new, but the game quickly introduces more interesting designs that keep the player on their toes. These aren’t always very clear, and color is sometimes a factor (shoutout to my colorblindies), but others are intentionally obtuse with hints excellently strewn about. Solving puzzles is easily the best gameplay element of The Bard’s Tale IV. 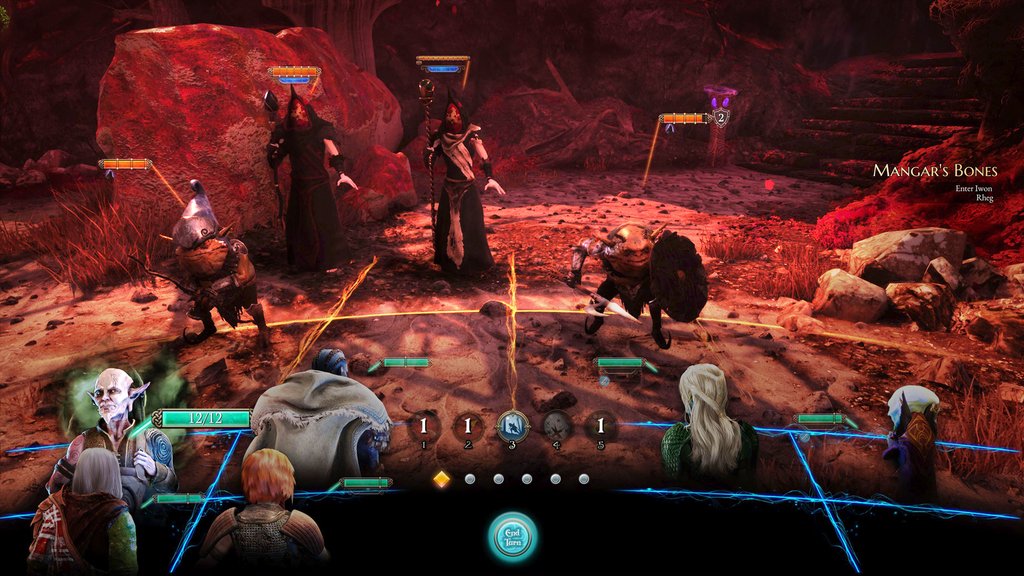 Combat is nowhere near as interesting, but it’s not awful. The developers were inspired by Hearthstone‘s gameplay, and it sure shows. Combat takes place on a 4×4 grid in turn-based fashion. Characters have a limited amount of abilities that can be equipped, so players must choose which ones to utilize in battle. The key to combat is balancing the resources available each turn. Bards can drink alcohol to use abilities, magic users need to acquire Spell Points, and everyone taps into the limited “Opportunity” resource for certain abilities.

Winning requires at least some thought, though once I discovered a winning strategy, battles played out essentially the same no matter what. It doesn’t help that the AI is as dumb as a doorknob. Enemies are also limited by resources, and it seems as if they give no thought as to how to best spend them. Certain enemies will not move for turns as others try to wail away on the player.

Animations also tend to play out slowly, making actions feel delayed. Some moves are “channeled,” meaning they take more than a single turn to execute. After the enemy takes its turn and those moves are to be used, there is usually this awkward and terrible delay where the moves simply don’t happen yet. I had luck hovering over the character who needed to use the move to sort of…remind them, I guess? The whole process feels frustratingly clunky. 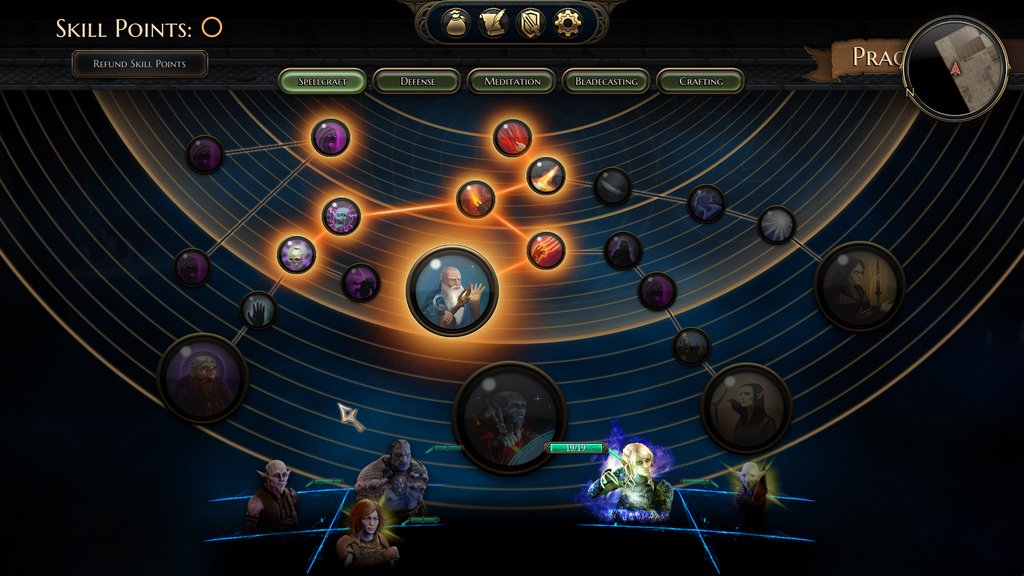 Plus, leveling up isn’t exciting. Leveling grants a skill point that can be used in that character’s skill tree. In the early going, it’s neat — new skills! Can’t wait to use them! So cool! Then, for a while, characters will level up and be shoehorned into taking a node that adds +3 to some stat. Oh, that’s good I guess. What’s the next node? Oh…also a stat boost. Well, that skill at the bottom seems neat at least, even if it takes another 12 hours to unlock. There is also an entire tree dedicated to crafting that someone needs to take, so they more or less “waste” their skill points to unlock new crafting recipes.

Oh, and the inventory system is absolutely useless. Everything is just thrown into an inventory grid with no way to filter or sort or anything that RPGs have had for an eternity. If inventory was limited, then I could understand it; there is no need for a sorting option when you can carry relatively little. However The Bard’s Tale IV allows for pages upon pages of inventory and there’s a distinct lack of frequent merchant NPCs. After a while I basically gave up on the inventory entirely. I knew where my potions were, and if I looted something good, it was on the last page. Everything else? Who cares anymore.

The archaic save system also poses problems. There are locations around the world that allow the player to either save the game or “consume” the save point for extra experience, forgoing the save. The issue is that things like crashing or geometry bugs can halt progress, forcing the player to reload their last save. After I lost a chunk of progress the second time due to things out of my control, I never consumed a save point again out of straight-up fear that the game would crash and I would lose time. Plus, the experience boost is paltry for the risk that is being taken. 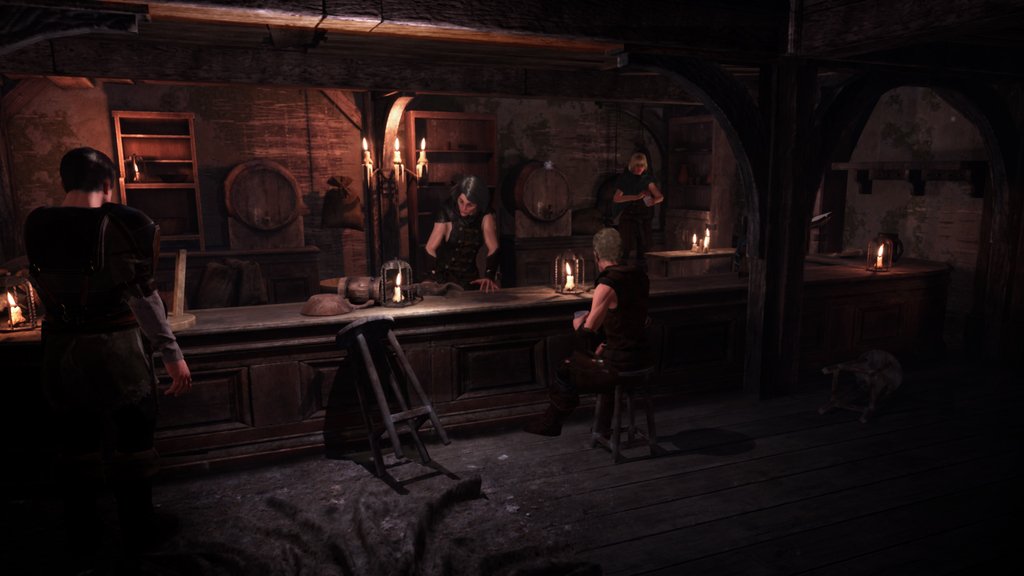 Okay, let’s end on the most positive note there is: the music. Holy cow the music in The Bard’s Tale IV is (appropriately) fantastic. Booting up the game and hearing “A summer’s day in Skara Brae…” just brings a huge smile to my face. I’m at the point where I’ll queue up The Bard’s Tale music while playing other games — it’s that good. The Gaelic music fits perfectly with the game’s theme and setting, and I’ll often find myself stopping just to listen to some random NPC sing their little tune.

Listen, if you’re reading this in the future, go and check the recent Steam reviews. My guess is that they will be rather positive on the game. A lot of the issues are tech-related: crashes, geometry bugs, load times, and framerate can all be fixed with patches. As of now? The interesting puzzles and fantastic music are not worth suffering through the bugs, lackluster models, and mediocre combat and skills. If your interest is piqued here, wishlist it and come back at a later time; I have no doubt that this game will reach its potential, but it’s just not even close right now.