A sorrowful and stunning adventure

An animal is most dangerous when backed into a corner. Given little choice, and with everything on the line, the imperiled can go to great lengths just to continue drawing breath. Desperation is a terrifyingly powerful thing.

The Banner Saga, perhaps above all else, evokes such feelings of extreme vulnerability. The tale follows a caravan of refugee vikings. Driven from their lands by a horde of demonic marauders, the survivors are forced to wander from one devastated village to the next. Threatened by the elements, dwindling supplies, and even other men; they’re faced with a seemingly endless string of dire circumstances in a world that’s quickly going to hell. 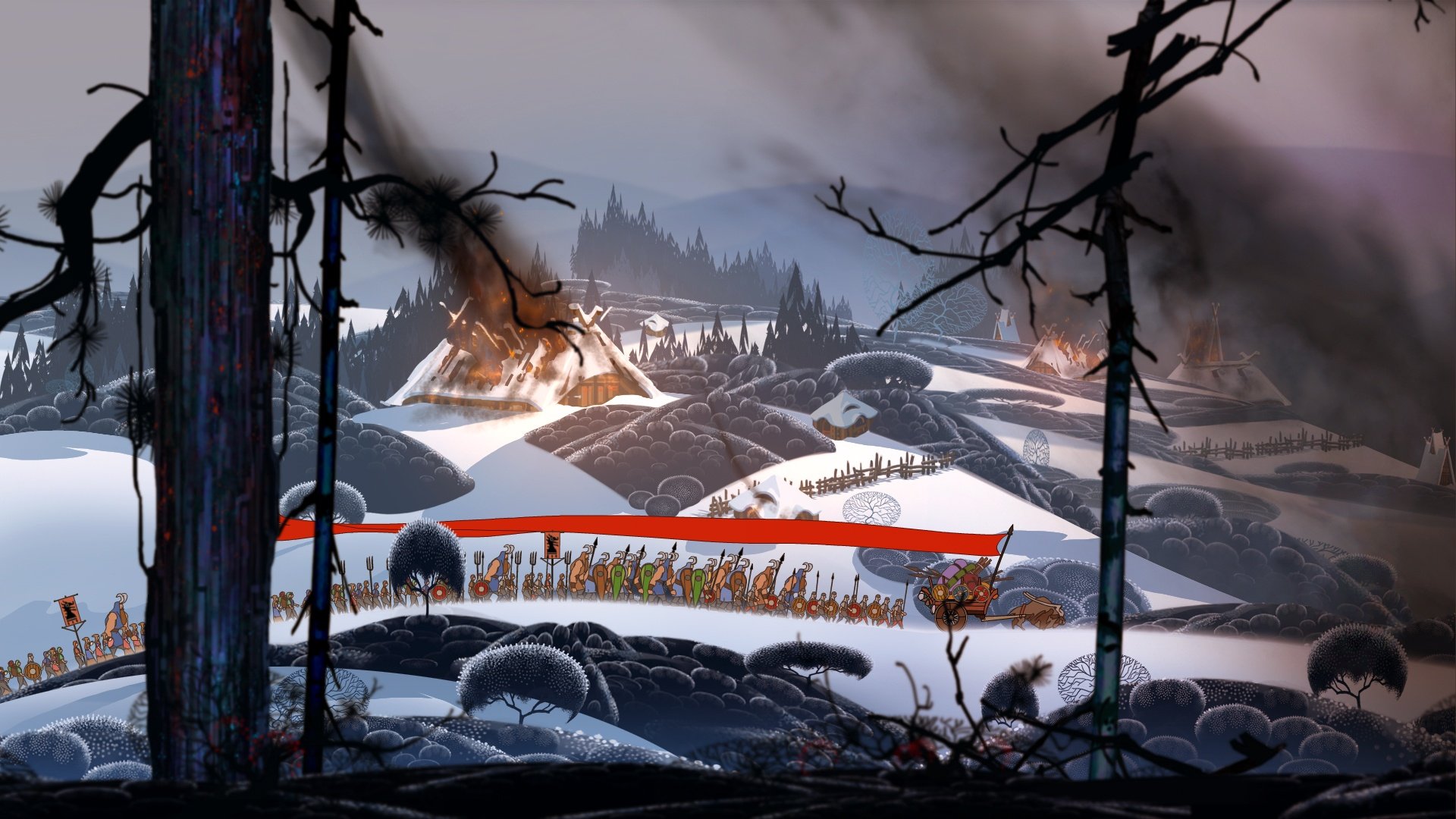 Beyond the dark narrative is an absorbing melange of strategy role-playing game and The Oregon Trail. It begins with little in the way of pretext or exposition. After a brief animated opening and tutorial, players are ushered along a path and left to react as an icy Nordic world inhabited by feudal men, horned giants, and menacing foes wash over them like a violent tide.

Though the narrative is somewhat preordained, players are put in the driver’s seat and cast as the leader of this ragtag convoy. As the story meanders along, the road forks and presents players with options. Some are more meaningful than others, and certain junctures will have consequences that send out ripples like a stone cast into water.

Even the best-laid plans can go awry. Characters will live and die by your decisions. And that’s okay. The Banner Saga is about making difficult choices and dealing with the repercussions. It’s far from a power fantasy. Oftentimes it feels like you’re just scraping by as you trudge through the wilderness, rations running dangerously low, desperately hoping to catch a break as your clan hangs by a thread. Situations seem to grow increasingly more dire. It’s a brutal world out there. 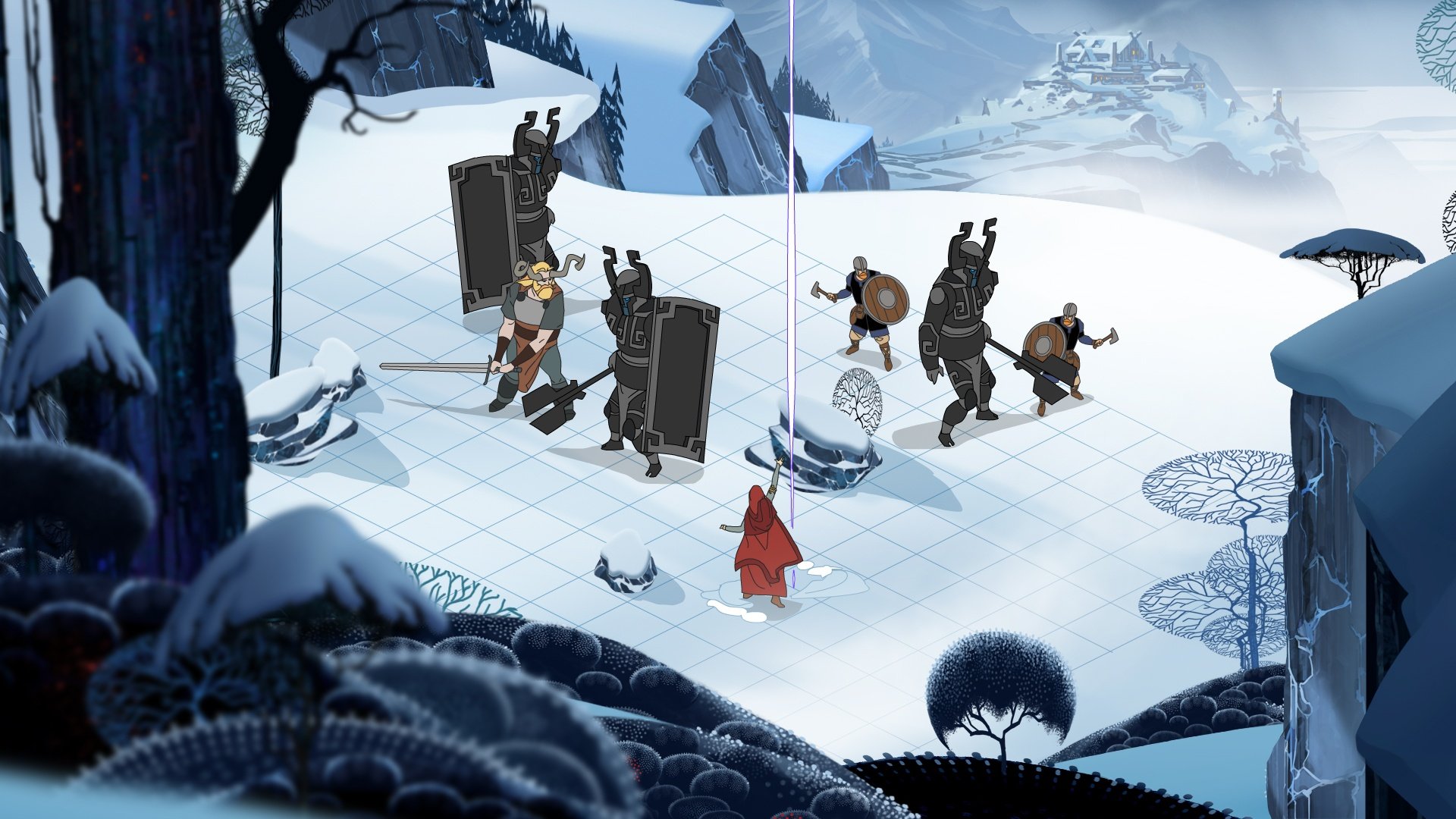 The combat echoes this wonderfully. Battles are challenging, though not punishingly so, and seems to provide just enough leeway for competent strategists to scratch out a win. It takes the classic tactical role-playing game formula with turn-based combat set on a grid and mixes in some unique strategic flourishes.

One of those ornaments is an armor gauge on top of the standard health bar. The amount of armor a unit has equipped has an inverse relationship to the amount of physical damage it will take from a direct strike on its health. As such, it’s frequently preferable to wear away a good portion of an enemy’s armor prior to going in for the coup de grâce.

An ability called willpower allows soldiers to move further across the battlefield, strike foes for additional damage, and perform special abilities. Though limited in supply, willpower can be recovered by resting or defeating enemy units. Managing when and how this precious resource is expended can often prove to be the deciding factor in a skirmish.

The cast of characters players will encounter along the journey is an incredibly diverse one. Players will field everything from hardened viking axemen, to young female archers, frail regal spearmen, and gigantic horned behemoths known as varl. Each warrior has unique attributes and special attacks, which allows players to mix and match to their liking.

Unfortunately, like much of the game, battles can feel plodding and lethargic in contrast with many of its genre peers. Actions and detailed animations, however lovely they are to look at, seem to take forever and a day to unfold. Perhaps this is an intentional ploy to avoid dissonance, but, at times, The Banner Saga can feel as arduous as the tale that’s unfolding on screen.

Even when it frustrates, one cannot help but be hypnotized by the the title’s art direction. In some ways, this is a game that needs to be played merely to be seen. It resembles something Disney would have crafted half a century ago, complete with ornately detailed landscapes reminiscent of Eyvind Earle’s work. One need only glance at the intricate trees that line The Banner Saga‘s gorgeous vistas to know from where the team at Stoic drew its inspiration. 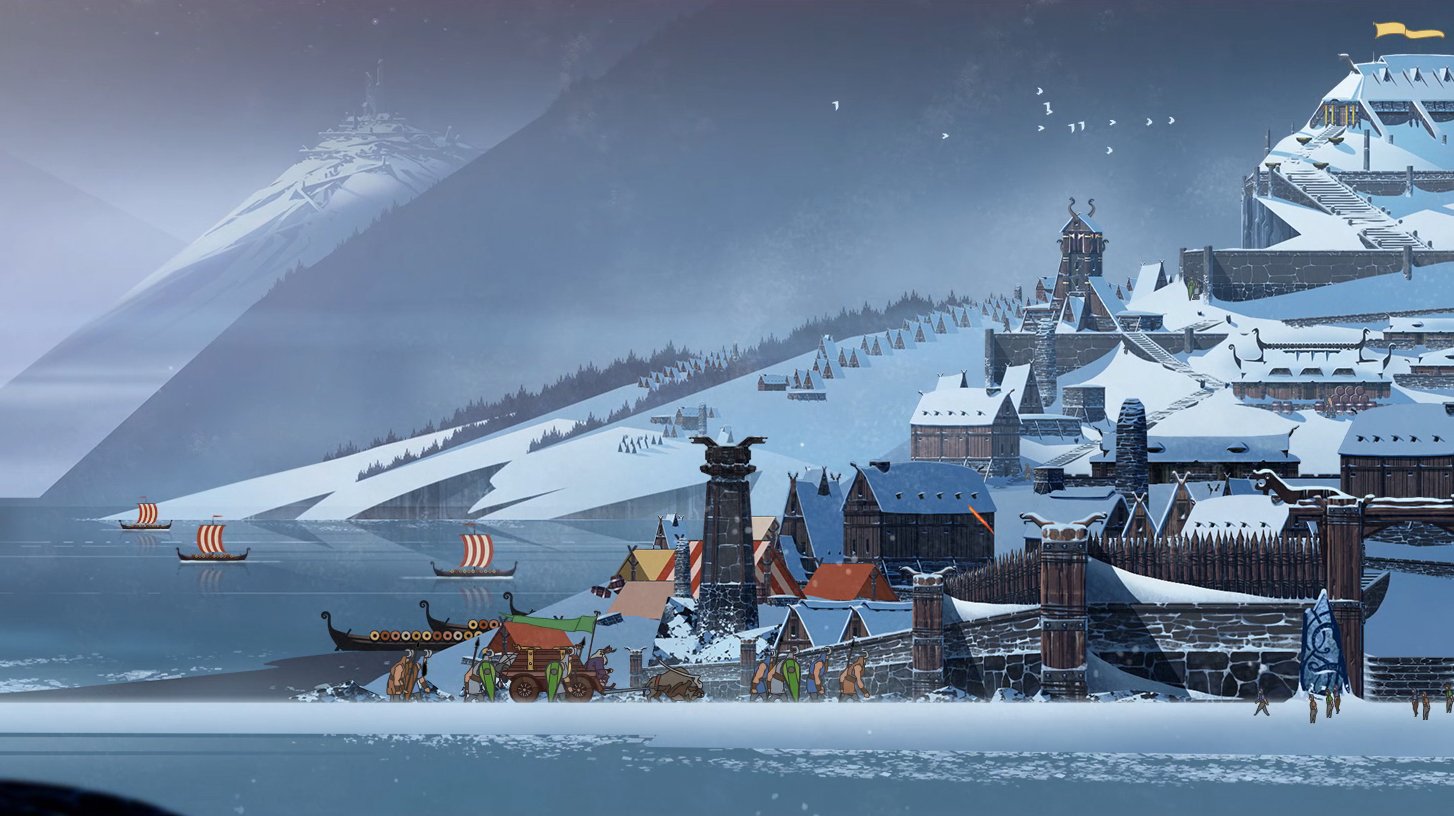 Along with the stunning visual aesthetic is a soundtrack that gives this story a sense of place. At times it’s barely there, if at all, as ambient sounds like wind howling over icy peaks set the mood. Elsewhere it’s reductionist and somber, but rises to the occasion when the time calls. Blaring horns and drums are contrasted with somber strings and solemn chants, as extolled Journey composer Austin Wintory transports players to this fantastical Norse world.

This game feels like a project created by artists. It’s uncompromising to a fault. Tiptoeing around trite conventions and hackneyed design choices, I have no doubt that the team at Stoic created the game they wanted to make. By the end of the journey, I cared for my banner like a shepherd tending to his flock. I commiserated with their hardships, as the thread of despondency wove its way throughout virtually every aspect of the experience.

The Banner Saga is a dark and onerous experience, but it’s one that draws you in. I’ll be waiting with bated breath to see which way this winding path darts next. Something tells me we’re not out of the woods just yet.